Hear/Here: The sounds of Congo Square

I sit in my room and listen to the sounds I recorded on my phone, two minutes of uninterrupted audio from Congo Square in downtown New Orleans.  The most prominent sound is the ambient noise of the city, loud and uniform like a large fan in a small room, spinning without pause. Cars drive by on the surrounding roads, occasionally honking.  I hear voices; a tour guide is wrapping up his tour, finishing his historical account of Congo Square and inviting his tour group to applaud for themselves at the conclusion of his speech. Birds caw on occasion, their harsh cries carrying across the square.  The city is loud, with thousands of cars, trucks, and people creating a wall of sound that exists throughout the entirety of downtown New Orleans.

The city pushes in on the square with its ambient noise, but there is a distinct “otherness” in this auditory space. The square itself is quiet.  This auditory separation is no recent phenomenon for Congo Square. Over two centuries ago, the enslaved people of New Orleans created a unique but entirely different auditory identity for this space; it was a place of song and dance, a place where the African culture and traditions were celebrated and preserved by enslaved people.  Centuries ago, the separation between the square and the rest of the city was even more apparent than it is in the contrast between the faint voices within the square and the rolling sound of thousands of cars and trucks that press in from without. Many white people visited the square in the early 19th century and would describe the scenes with a mix of disdain for African culture, interest in the cultural practices that so differed from white American culture, and admiration for the unbridled passion and intensity of the song and dance that existed within the square (2).

The noise of the city is a deep and uniform white noise, like a thousand waves crashing unceasingly in the distance, imposing its deep pulse on the surrounding land.  Although the square itself produces no noise, it cannot avoid the roar of the city. There is a boundary between the cars rumbling past on the roads surrounding the square and the few and far between voices that whisper across the space of the square, but the rumble of the cars wins out in the end.  The louder sounds impose on the faint voices, just as the bureaucrats of New Orleans imposed on the culture of Congo Square until it was transformed from a ringing, passionate place of celebration to an abandoned patch of land. Initially, the voices of the enslaved people of New Orleans were anything but faint. They would sing and dance in the streets across the city until the Spanish army outlawed the congregations in 1786 (1).  Just as the rumble of the city pushes upon the quiet of the square, the cultural gatherings of enslaved people were pushed toward the periphery, relegated to Congo Square in the early 19th century by the New Orleans government and restricted to Sunday afternoons (2).

A bird shatters the wall of sound with its transient cry.  The cry is short but rings forth with passion, just as Congo Square would ring forth with sound on those Sunday afternoons.  The caw of the bird echoes through the square for a few short seconds before leaving only the faint voices and the ever-present wall of sound.  The rumble of the city will not be denied or blocked out. Instead, it will roll over every sound space in the city and make it its own. This is how sound functions; the louder noise always wins out.  And although the voices of Congo Square in the 1800s were loud, the stifling bureaucracy of New Orleans strove to be louder still. The gatherings of Congo Square were suppressed in the 1830s, likely in response to the Northern abolitionism that was continually intensifying in the pre-civil war era (1).  Ultimately, in 1856, a law was passed banning the use of drums and horns for Black people and officially putting an end to the activities of Congo Square (2). Thus, the loud and passionate sounds of the square were suppressed into the quietude that pervades the square today.

The voice of the tour guide is not meant for those who have been impacted by the activities of Congo Square, it is meant for those who are separate from it to appreciate it from an intellectual distance.  His voice is thin and faint, with words that are clear to those in his tour group, but faint beneath the rolling cars and the cries of the birds. The faint voice is constant as it uses the history of Congo Square to its benefit, to generate interest in the people around it.  Louis Moreau Gottschalk lived near Congo Square for a short time and claimed inspiration from the African music that he heard during this time in his song “Bamboula.” During the time when he wrote it, Gottschalk was living in France, where an interest in exotic culture was rising (2).  It is an elegant piece, with piano notes that flow just like the words of the tour guide over the sounds of the square. What the voice of the tour guide lacks is the natural authenticity of the bird’s cry, which rings out without care for the humans beneath it. The cry has no financial agenda, it is raw and true to the creature that it comes from.  This is what “Bamboula” is lacking, an authenticity to the origin that it claims it was inspired by. The music of Congo Square was percussive in nature (1). In fact, “Bamboula” is actually the word for an African drum (2). Therefore, Gottschalk’s creation seems less of a cultural ode to Congo Square than an attempt to capture the interest of the Parisians who he knew would listen to his work.  If this was Gottschalk’s intention, he was correct. “Bamboula” generated significant interest in France, and later in America, and helped initiate the stirrings of interest in African culture that soon transformed Congo Square into a tourist destination (2). 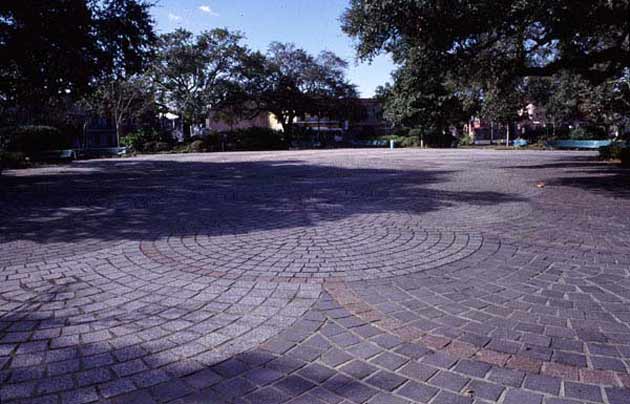 A photo of present-day Congo Square

The applause is a unified sound that floats through the square.  It is a group of people who are expressing their support of the history that the voice of the tour guide has just explained.  Just as these claps lend their support to the lone voice, works of George Washington Cable and Lafcadio Hearn lend their support to Gottschalk, and in turn, the public lent their support to these white intellectuals.  Cable was an ardent supporter of African American rights, and was deeply interested in both French and African culture, as was Hearn. Naturally, Congo Square attracted them. Both Cable and Hearn worked together and created writings that told of African culture and Congo Square.  These accounts were often more fiction than fact and were heavily exaggerated (2). The smattering of applause is a mark of the auditory difference of the square among its surroundings — the boundary between the quiet voices and the noise of the city; the boundary between Congo Square and the French Quarter; this is a boundary that exists in the sounds of the square and the history that has shaped it.  The voice of the tour guide and the applause of the group symbolize and appreciation for the activities that once existed in Congo Square, but it is an appreciation that is separate from reality.

This is an original song that I created to reflect the differences and disingenuity of the work of Gottschalk, in regards to his attempts to “capture” the sounds of Congo Square.  Although there aren’t recordings of the music originally performed in Congo Square, it was described as uptempo and percussive. I created a percussive beat using an African drum software kit, and over it I imposed a classical style piano melody in the style of Gottschalk to contrast the two styles and highlight the differences between them.  Although I have no way to verify the similarity of the drum tracks to the actual music of Congo Square, this track is meant to showcase how Gottschalk’s attempts to capture the music of Congo Square were likely disconnected from the reality of the original music.