Big (un)Easy Living: Roommates in the age of coronavirus

For the past couple of years, I’ve been encouraging my husband, Stewart, 67, to think about retirement. Or at least to cut back on his hours a bit so that we can travel, spend more time with our grandkids, you know, the usual.

After two weeks of self-isolation with him, I’m re-evaluating.

Couples across America are engaged in this new social experiment: Lock yourself in a house (or small apartment) with your roommate or significant other and see what happens. Online memes (because what else do we have to do?) underscore the perils. As in: 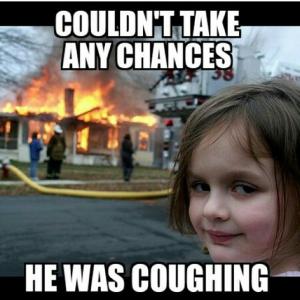 Or when you thought you knew your relatives well, but …. 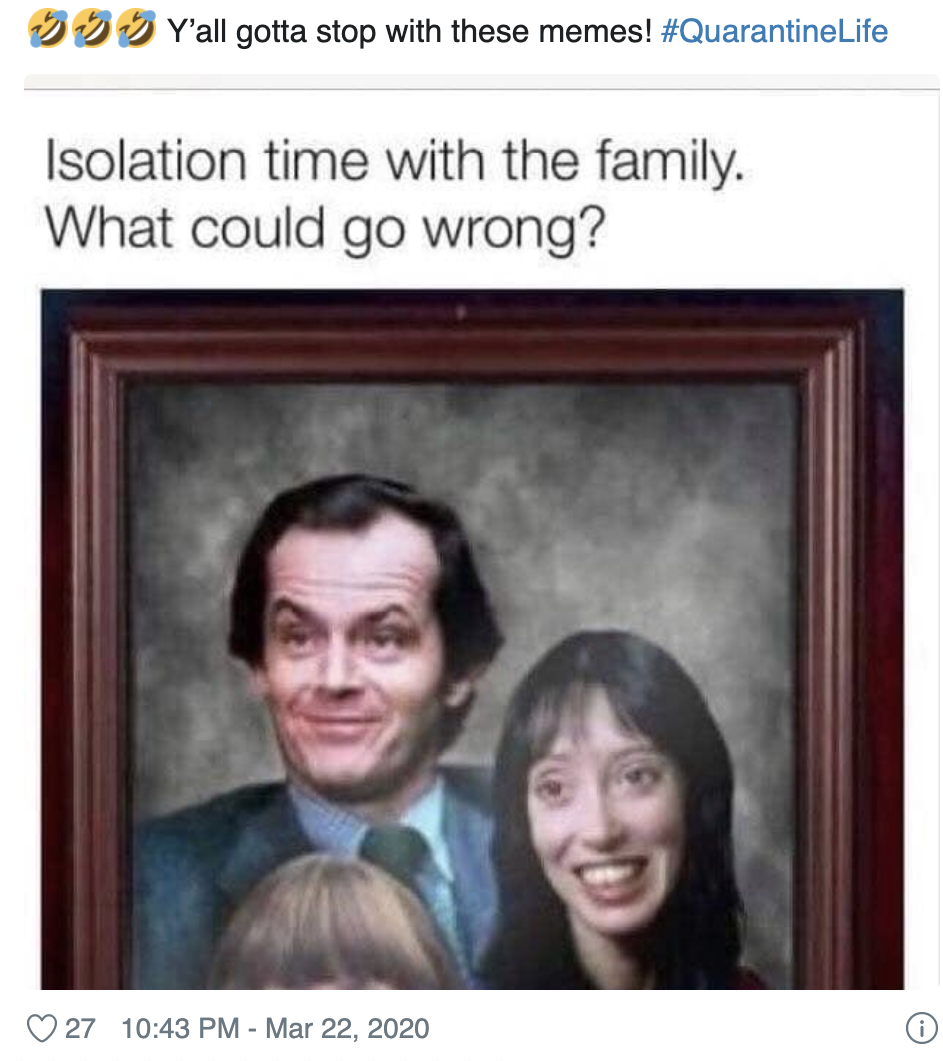 Or when spatial constraints start to make you a little flaky. 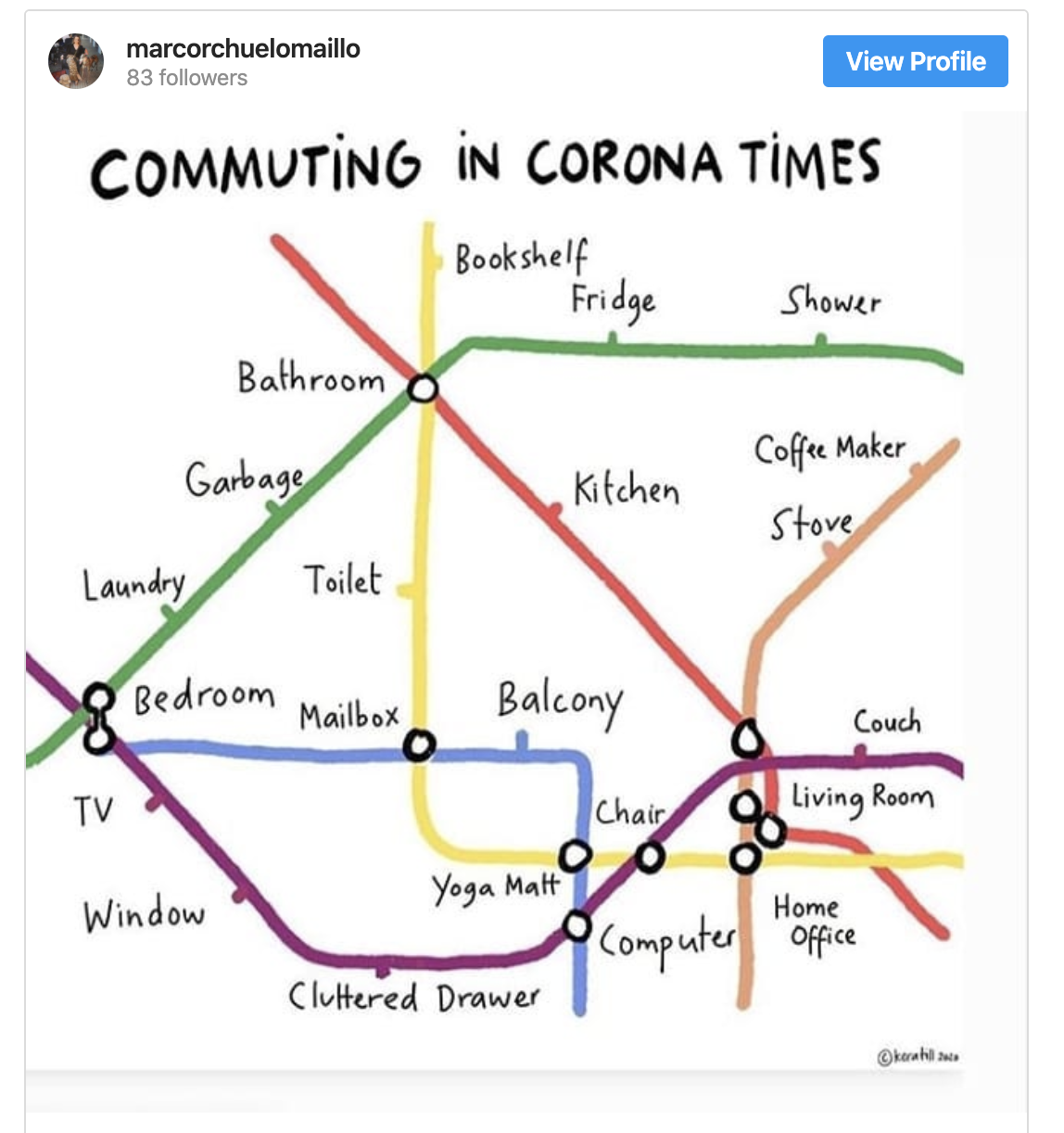 It’s Big Brother replicated endlessly. We’re all living in a reality show, and the camera-takes are selfies.

Stewart and I have been married for almost 45 years. We were college sweethearts. We tied the knot young. We know each other’s predilections. Domestically, we dovetail nicely. He hates loading the dishwasher; I hate unloading it. He likes to run the vacuum; I like to swipe the counters. Ours is a balancing act of home partialities. I hate clutter; he hates dust.

Psychologically, we prove the opposites-attract thing. He’s an extrovert; I’m an introvert. He angers quickly; I’m a slow burn. He likes to argue; I hate conflict. We get along in a kind of Felix and Oscar way.

But our relationship has flourished because we share similar values and a sense of humor – two things that, in my personal and inexpert opinion, are the bedrocks of successful partnerships. If you can laugh at yourselves or your differences, you’re ahead of the game. If you are in basic agreement about what’s right and what’s wrong, about your priorities in life, you bond.

But living in close quarters is demanding. Stewart exhibits textbook adult ADHD: i.e., he can’t sit still. The first stay-at-home week drove him crazy. He wanted to run to the store, go to the bank, ride his bike, walk the dog, pace the halls. Anything to keep moving. He’s mown the lawn four times. I was committed to self-isolation and control of the remote. 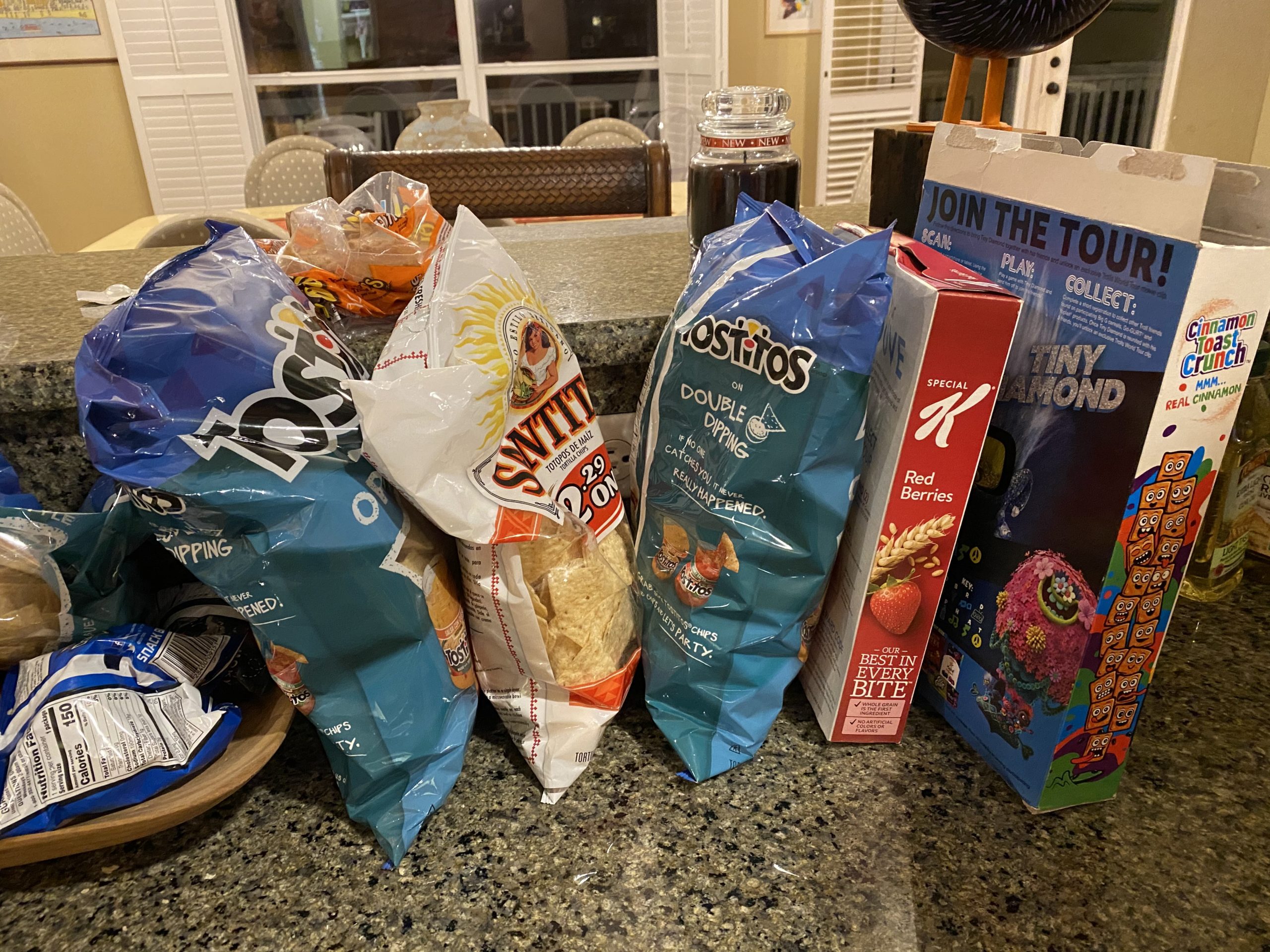 He’s a self-avowed chip-o-holic with a sweet tooth. I worry the new saying is true: That freshman 15 is now the quarantine 15.

The first week involved a bit of rule-making. “No, Stewart, you cannot go to the gas station for ice.” “No, Stewart, you cannot go to Dollar General for Cheetos.” I finally agreed to an ATM run, because, really, we all need good hard cash now, right? (People who stock up on water or charcoal puzzle me, because, are our taps or our stoves going to stop working? Stewart wanted to know if we have a manual can opener; I was like, what, is the electricity going off? But that’s a column for a different day.)

I probably do some things that drive Stewart crazy, although, honestly, I can’t think of any right now. Suffice it to say that it took us a week to fall into a comfortable isolation rhythm. We’re both working from home, glued to laptops and cell phones. We’ve divided the dining room table. His share: 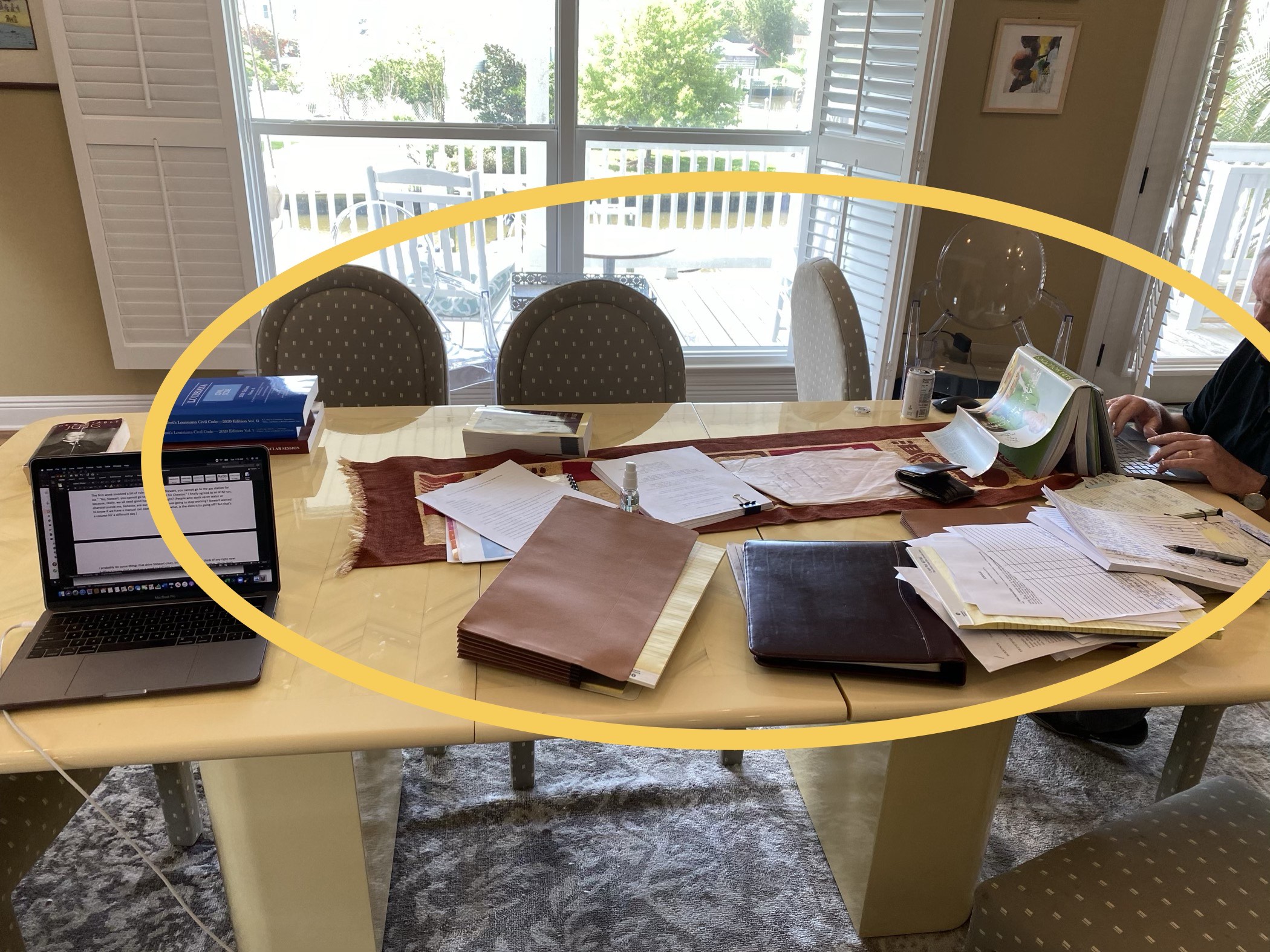 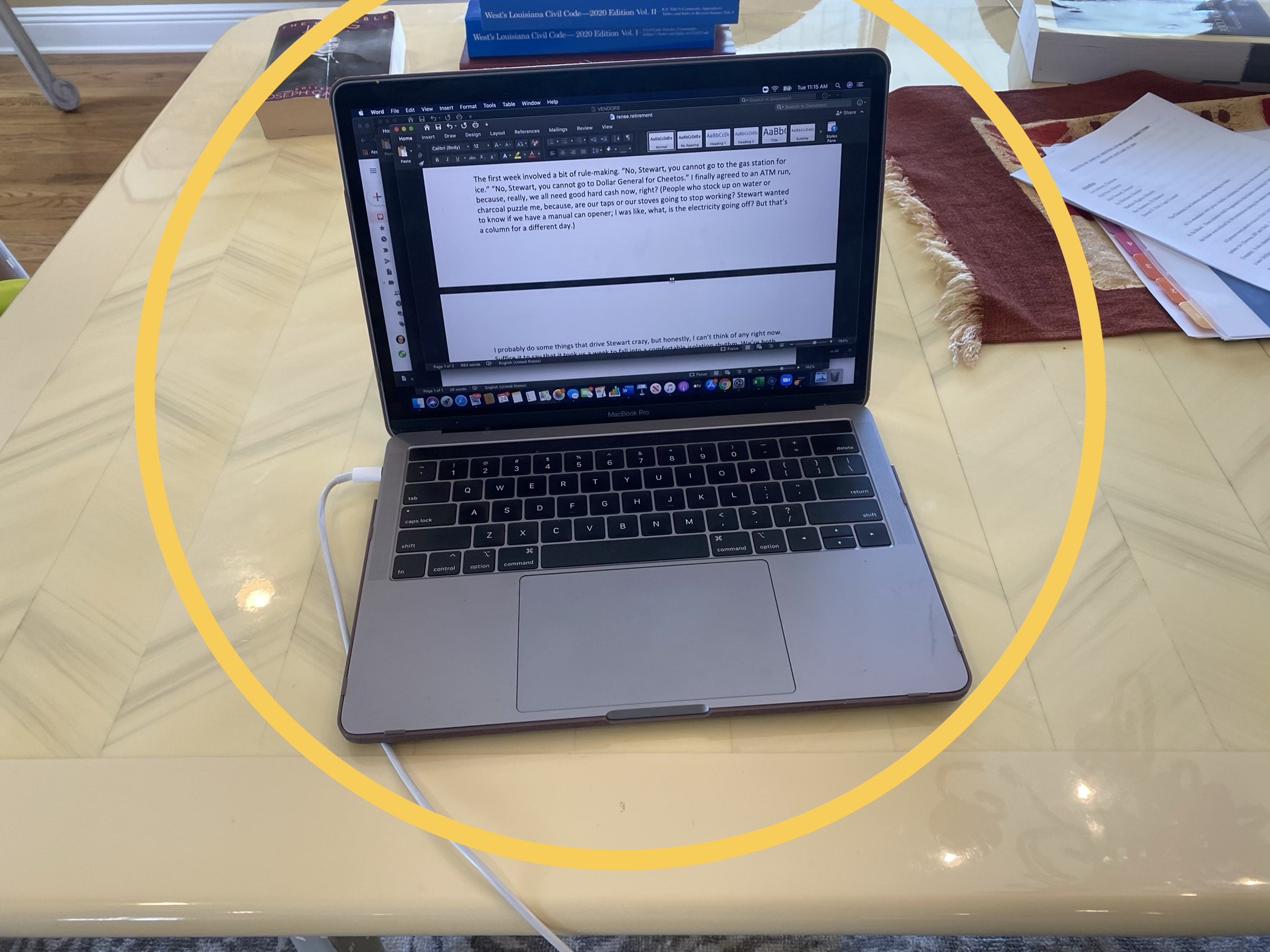 But he’s working longer hours than I am. And I do have that aversion to clutter thing. He takes calls and joins conferences indoors; I go out on the porch.

It’s an evolving situation as we find our way through this new normal. He’s giving me one hour of American Idol for four of Bloomberg. We walk the dog together now. I laugh at his bad jokes. I’ve rationed the Oreos to four each per day. Because …

At the beginning of this week, Stewart looked up from his computer. “This is kind of like a trial run for retirement, isn’t it?”

It is, in a way. Retirement doesn’t have to be about stopping things, but starting them. We are embarking on a new phase together, and learning what works, what doesn’t. Disaster — and, I suppose, retirement — can bring people together or pull them apart. Hurricane Katrina brought us closer, and now I think the coronavirus may do the same.

In the end, retirement is not really the issue. What matters more is how we come together as a couple to continue the journey.

I’ll leave you with one last bit of invaluable advice learned in Memeville. 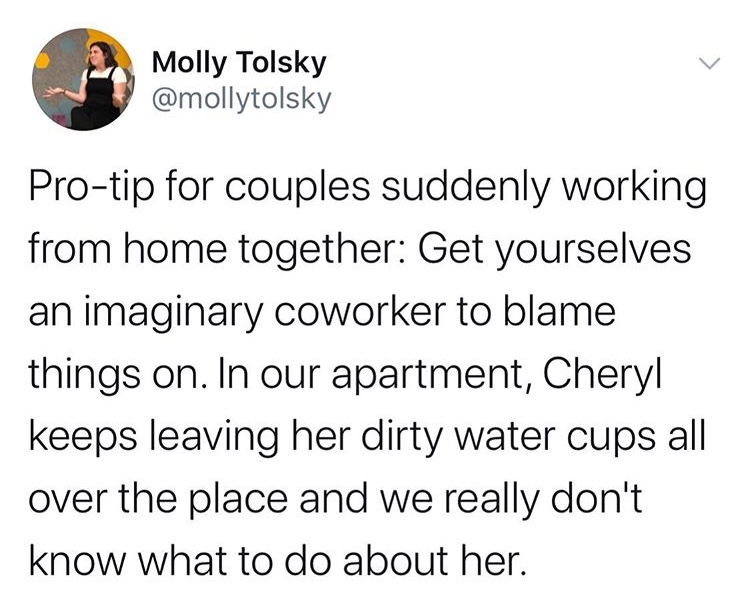 Ty and I lived together and worked together for 32 years. Miraculously nobody ever had to call the police.

Robert J.Bruce
Recent Posts on ViaNolaVie
Become a ViaNolaVie Patron!     Your donation supports the work of ViaNolaVie to: Provide a platform...