One of the promises I made to myself when I first moved to New Orleans was to be more open to exploration. Part of this exploration was learning about other cultures, specifically Black American culture. Growing up on Nigerian soil thousands of miles away in West Africa, the only knowledge I had about Black American culture were the nuggets I got from episodes of the Fresh Prince of Bel-Air. But surely not every Black person in America lived in Bel Air; although I did find some on Royal Street.

I had spent that morning at a dance class downtown and after realizing how close I was to the Quarters, I figured I would continue my exercise and check out the scenery in the daytime for a change. As I got closer to the middle of the Quarters, the crowds and noises grew around me until I was immersed in a myriad of sounds. But one stood out in particular. It sounded like a clarinet.

Right in front of the Rouses on Royal Street was the source of my mystery clarinet. On the side of the road was a makeshift stage where a three-person band played. In the back was a young teenage girl on the drums. She was playing a solo with a rhythm so complex, it had to be second nature for her to get it right. On the far right was an older man with a tuba probably twice my height. He played the repetitive but steady beat the drums followed, much like that of a marching band. And in the center, sat our clarinet player.

The sounds were warm and sweet, almost playful. The jovial tone the clarinet produced paired perfectly with the steady tuba. I did not know the song they were playing, but I felt a sense of familiarity that had my feet tapping along, almost ahead of, the beat. Just when my feet thought they knew what was coming next, our clarinetist began to play her solo.

It started much like other solos, with a crescendo building up till its peak. And when she got there, she held that note for so long, I went from just absorbing the music to feeling both scared and impressed by her lung capacity. Finally, she ends her 24-count hold and I have to stop myself from grinning too hard. If I was not having a good day before then, I definitely was now.

And just like that, the show was over just as quickly as it had started. Still, in awe of the performance, I walked over to the tip jar to drop the last couple of bills I had and shortly after that, the clarinet player and I got to talking. 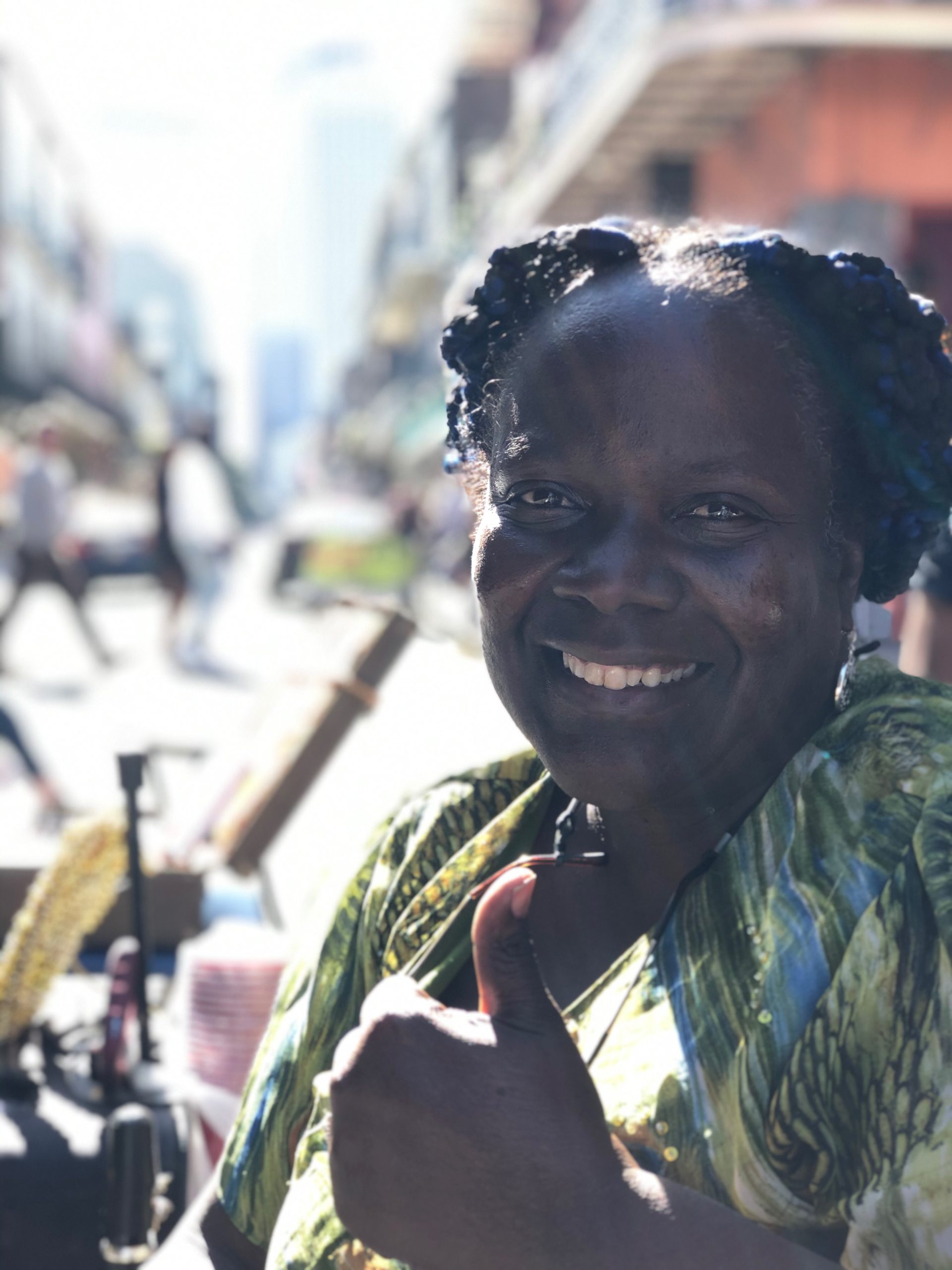 Portrait of Miss Doreen, the clarinetist (Photo by: Bim Anibaba)

Following band tryouts, she ended up playing all through middle and high school and when she got to college, she joined her tuba-playing college boyfriend-turned-life partner’s jazz band. The two of them had a passionate connection both on and off stage that mirrored the harmonies they made playing together. Her being the fun clarinetist, and him the stable tuba player that held the band together.

It was the harmony they created together that got her playing on the streets of the French Quarters. “We were walking around the Quarters and saw some people playing on the street. He said, you know we could do that. I said you must be crazy! I’m in college, I’m not playing no music on the street. But love makes you do crazy things” (1). And that wasn’t the only love that brought her there. It was her love for her culture too. Her love for New Orleans.

New Orleans is almost synonymous with jazz. While its exact origin story is difficult to identify, it is clear that jazz was born out of African American culture. When Africans were brought to America as slaves, they brought parts of their culture with them and in New Orleans as Alan Lomax, American ethnomusicologist noted, the connection was clearer (6). To him, other experts and, the rest of the jazz world, it was clear that jazz was born out of the desire of Black enslaved persons to maintain, and eventually return to the African cultures and traditions that kept

them grounded through a period of strife (6). 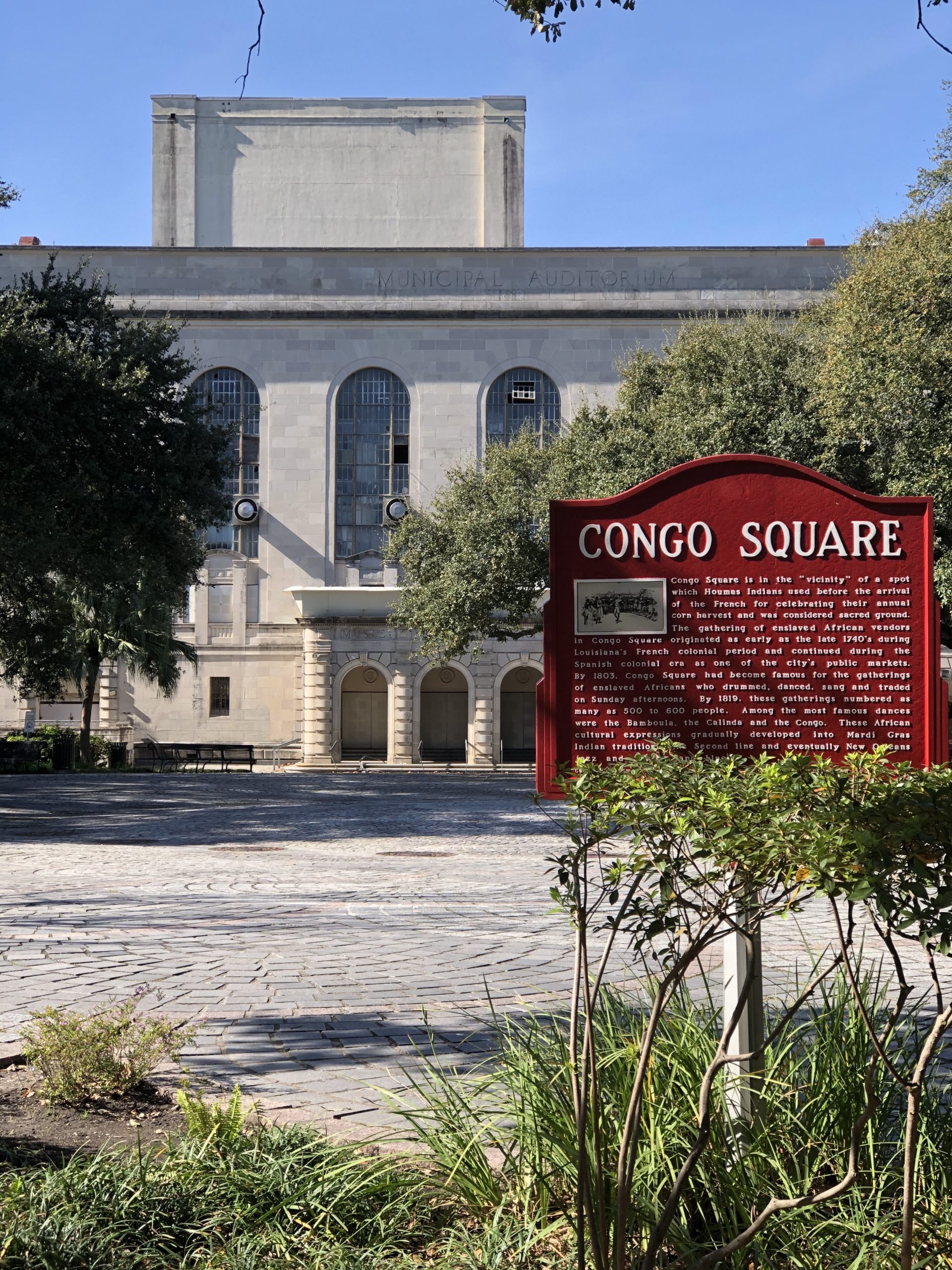 A picture of Congo Square in February 2020. (Photo by: Bim Anibaba )

Unlike other parts of the slave-trading North America, society in New Orleans provided more liberty to the enslaved. Although not as free in expression of character as Miss Doreen’s solo, slaves in New Orleans were permitted a relatively

liberal chance at freedom. This was a free Sunday where they were allowed to move

around the city unsupervised. For many Black people, both free and enslaved, this meant congregating in now Congo Square to sing, dance and trade goods (2). Not having the means to own musical instruments, they created their own. Washboards, empty food cans and lard buckets substituted for the traditional West African instruments they had once played (3). With these improvised instruments, they produced music following similar polyphonic rhythms and syncopations from their African roots. The crowd joined in on the call-and-response

songs from the song leader and there in the midst of struggle and hardship (2), just as my feet found the beat of the music, they found joy and jazz.

With time, these makeshift instruments came to better resemble traditional African instruments. During a visit to Congo Square in 1819, career Benjamin Latrobe made sketches of the instruments he witnessed being played. It is from these sketches, and other descriptions of the instruments, that ethnomusicologist Christopher Waterman inferred “it is clear that one of the main sources of inspiration was the network of African derived musical traditions that connected New Orleans… to the Caribbean, and ultimately to Africa” (4).

The 19th century brought the end of slavery and the incorporation of European sounds and instruments to jazz. Free Black people could now earn money to own instruments, mostly of European nature, or were gifted some by previous slave owners (7). Soon jazz began to grow and reach new audiences. Its expansion past New Orleans and the South allowed other forms and music genres to influence it. Tubas and trumpets were incorporated, classical sounds developed and the genre was polished (2). 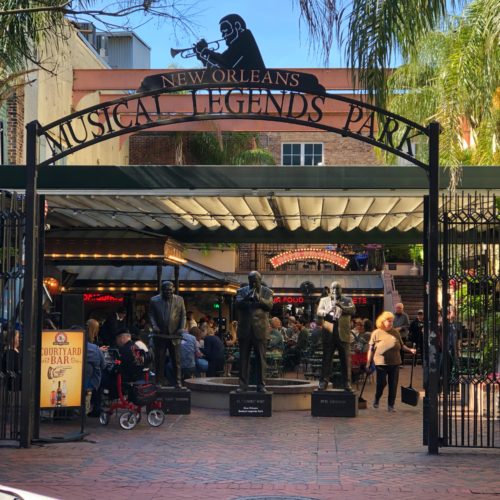 A picture of Musical Legends Park on Bourbon Street. (Photo by: Bim Anibaba)

Even as its sounds and reach grew, jazz remained rooted in African melodies and the African American experience. “You hear different interpretations of it [jazz],” Miss Doreen notes, “but the origin is still the same thing. It grew out of hardship” (1). A hardship that can be felt in classic jazz songs like Miles Davis’ So What, and in some ways, Miss Doreen’s performance in the New Orleans Sunday heat. In the midst of inhumane conditions and undignifying experiences, the African slaves found an outlet to release tension, find joy and remain grounded in their roots.

The resilience of these enslaved people illustrates the strength of culture and its practices, and how it never really leaves you. Today, the US is home to 44.4 million immigrants, many of whom still engage in their cultural practices despite being thousands of miles away and multiple generations deep (5). Hindu Indians still celebrate Holi every year, and today’s New Orleanian youth continue to learn and produce jazz. Culture has proven to be a powerful force that brings us back to it. And sometimes it comes back to us.

Today, jazz has evolved and subdivided into different forms. Some more Eurocentric like jazz-tango, and

others like afro-jazz and afrobeat which resemble its original African roots. The story of Jazz in New Orleans is one that signifies the power of culture and its ability to bring people together. The separation of Africans by slave trade did not completely destroy identities but showed our ability to find each other again. This weekend, I made a friend and a familiar connection with Miss Doreen. I intend to be back for her next set. 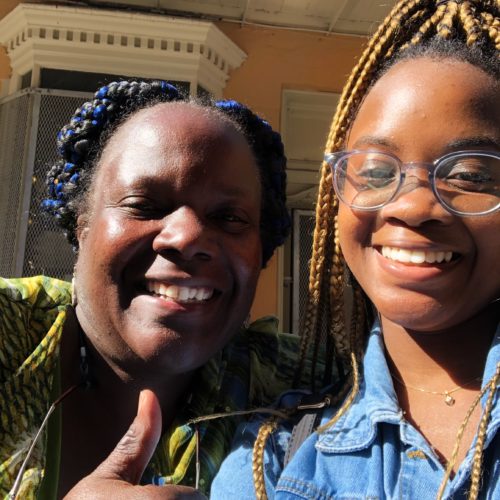 A picture of Miss Doreen and the author, Bim Anibaba. (Photo by: Bim Anibaba)

This piece is part of the “Hear/Here” series where students choose a location, make a recording, and analyze those sounds in connection to that place’s history. This is part of the Alternative Journalism class at Tulane University that is taught by Kelley Crawford.