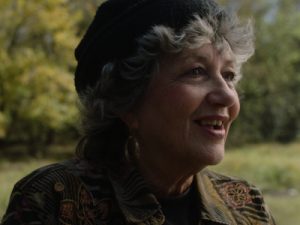 Still from the documentary Intention, which will be screening on Friday at 6:00 PM for the French Film Festival. (Photo: New Orleans Film Society)

Like that of New Orleans, the culture of Acadiana puts a premium on fun. “Yes, we love to drink and eat and dance and all that,” says Filmmaker Olivia Perillo.  “But I feel like there’s something underneath all that that brings everyone together in a much more spiritual level.”

Perillo and her producing partner Syd Horn explore that spiritual aspect to Acadian culture in their documentary film Intention, which screens Friday at 6:00 PM at the Prytania Theater as part of the 23rd Annual New Orleans Film Society French Film Fest.

The film is about eleven women in the Acadiana Area, says Perillo, and “about how we heal a culture and tradition by way of language and art and music and food and traditional faith healing.”

“What we came to find was that healing was happening in so many different facets of women’s work around our area,” says Horn, “whether that was in agriculture, food, in music, in teaching, in faith healing, in all these different aspects of our culture that we’re known for.”

But over the course of filming, Intention also became an investigation of the spectrum of French culture in Southwest Louisiana, says Horn, examining “how many different heritages are interwoven into the tapestry of this area, how these different backgrounds have affected one another, and what they kind of means for us now.”

Both Horn and Perillo are from Lafayette, and while they’ve known each other since elementary school, they never became close until they shot their first short film, “Migration,” together in 2018.

“We’re really passionate about telling stories from this area in a way that feels true to the audience,” says Horn, “especially viewers that are watching it from these regions, because so often someone from the outside can come in and try to document this area and you can watch it and something just doesn’t feel quite right.

“And I think that because we’ve chosen to work with so many people that are natives to these French speaking regions, we really captured what it looks like to be from this place.”