“Who lives, who dies, who tells your story”: Part II of the interview with obituary writer John Pope 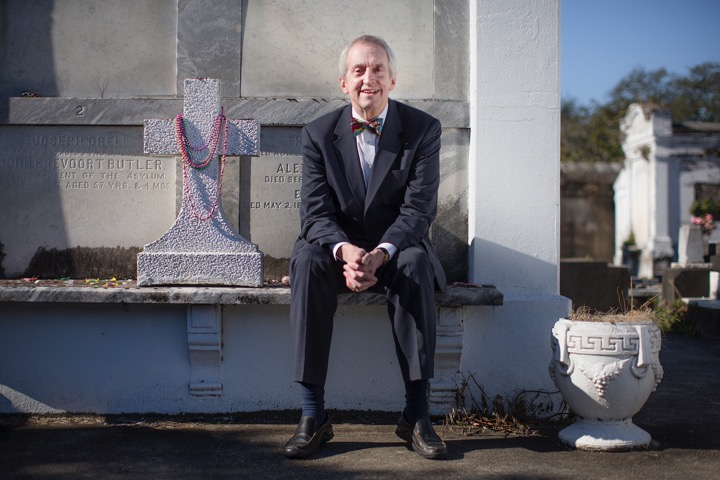 John Pope in Lafayette Cemetery No. 1. (Photo by: Chris Granger)

BF: This is admittedly a very broad question, but has this job taught you anything about life?

JP: Oh, yeah. Glom onto it while you can. I turned 70 in November; my motto has become, ‘If not now, then when?’ Doing obituaries for people like your grandmother and Rosa Keller, and people who were not such luminaries but did good things taught me that time is a precious thing and do the most  you can with the time you have.

At the end of Death of a Salesman, Linda Loman stands at her husband’s grave and says, ‘Attention must be paid.’ These obituaries are my Linda Loman moments. Not everyone is a luminary like Edith Stern or your grandmother, “Sunny” Norman.

JP: I love Sunny. One of the fun things of doing an obituary of someone you know is you observe her over the years. Whenever, even at the most formal event, whenever Sunny Norman was having a good time, she would take off her shoes.

JP: Even in the Hall of Mirrors at Versailles. There’s a funny Sunny story you don’t know about. I had written her obituary in advance. My wife and I went to a party one Christmas, walked in, and there on a sofa, left to right, was your grandmother, Sunny Norman; John Minor Wisdom, hallowed federal judge; and Lucille Bloom, major philanthropist. They were sitting together and having a great time. They had no idea that I had written all of their obituaries. So naturally, I considered them dead. I almost had palpitations. Advance obits for people who are not dead. It’s lovely to have the time; but of course, you never know how much time you have.

For instance, Paul Prudhomme. Since Prudhomme was, you recall, a man of size, my editor said he could be (in his words), ‘lauched to glory at any moment.’ Well, Prudhomme hung on for 27 years. And then, on the other hand, Bill Borah, died when I was halfway through his obit. But, the advance obituary gives you the luxury of time, that you have to use wisely, to assemble a portrait. With Eudora Welty, I was able to call a lot of Welty scholars and do a pretty fair analysis of her work. With Fats Domino, that’s one of my favs. I treated that the way I would have treated a paper in grad school. I was blending details of Domino’s life against the development of rock n’ roll that he was, pardon the pun, an instrumental person in.

With Ella Brenan and Leah Chase, both were women in a man’s field, and Miss Leah, especially, was feeding the Civil Rights Movement for heaven’s sake. Ella was this force of nature. I had known these women for years. Have you seen Hamilton?

I have not been fortunate enough to.

Well, spoiler alert, he dies. But, the last song talks about time and the important use of it. I marvel at folks who have been able to accomplish so much. And they also happen to be in the right place at the right time.