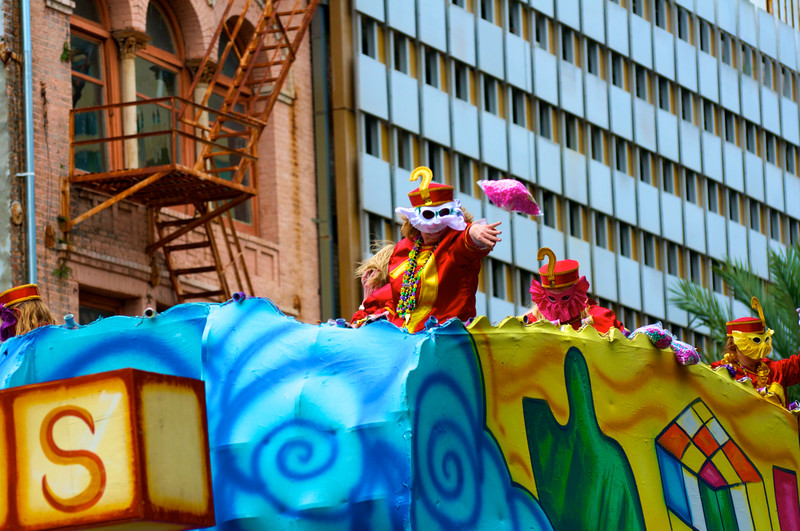 A little or a lot of Mardi Gras love — who knows when it comes to throws. (Photo: Canstock)

It’s Carnival time in New Orleans, and that means that throw season has arrived. Throw as in the noun, a throw, not the verb, to throw. We’re talking about that time of year when revelers raise their arms in supplication for trinkets tossed from passing Mardi Gras parade floats.

Of all the things that make New Orleans one-of-a-kind, parade throws may well be the most idiosyncratic. I don’t know of any other place on Earth where this ritual of tossing and catching from krewe to crowd takes place. I’ve been to Carnivals from Rio to Nice, and, while they have their own unique branding, they just don’t do it like they do here. When I took my own kids to the Macy’s Thanksgiving Day Parade, they scratched their heads in puzzlement. Why are people here when there’s nothing to catch, they wondered?

After four decades of riding in New Orleans parades as well as watching them curbside, I’ve seen various Carnival throws come and go. Doubloons were hot, then not, and, recently, kind of hot again. Beads have gone from Czechoslovakian glass to Chinese plastic and back to glass again. They’ve gotten more colorful, a lot longer, and a whole lot bigger.

This year, the New Orleans City Council has banned parade riders from throwing anything still wrapped in plastic. That may not reduce the environmental impact of the 20 million pounds of beads thrown from floats each year, but it will at least help keep the streets clear of the thousands of plastic bags that have gone over the sides with them.

A by-product of this change to the Carnival code is that krewes can no longer throw entire grosses of plastic-wrapped beads. Which is a good thing. You know that if you’re one of those people who has ducked for cover when a particularly ebullient float rolls by and throws become deadly parade projectiles. Years ago, when my daughter moved into an apartment on Henry Clay Avenue Uptown, she wondered why all the neighbors boarded up their windows during Carnival. She found out when Thoth rolled by, and over-zealous bead hurling shattered two of her front windows.

So the trend toward more eco-friendly and crowd-friendly throws is a good one. More and more riders (and everyone in Chewbacchus) are shunning petroleum-based products completely. Last year, the riders on my float in the Iris parade made the conscious decision not to throw beads. Really, NO beads. We threw butterfly wings, fanny packs, playing cards. But not a single strand of pearls. It felt a little like having Halloween without candy, or Valentine’s Day without the chocolate. This year, after some soul searching and by popular demand, we’re throwing just one special butterfly float bead. So I guess we’re kind of having our king cake and eating it, too.

For riders, throws – the nouns – are important. They can make or break the reputation of a Carnival krewe. Thousands of people turn out for those parades with “good” throws, like LED swords or blinking neon sippy cups. Sparta has an annual mystery throw. Endymion’s motto is “throw ’til it hurts.” Bacchus is throwing light-up cowboy hats and bolo ties this year.

Zulu started the trend for signature throws more than a century ago with its hand-decorated coconuts. Muses picked up the idea in 2001 with hand-decorated shoes. Now Alla decorates genie lamps and Nyx embellishes purses. Excaliber has its wooden shields. Choctaw, its tomahawks. Centurions, its swords. For Okeanas, it’s crawfish trays, and for Carrollton, shrimp boots. Seriously. Anyway, you get the idea. Tucks has its trademark toilet paper, or course, but the City Council has degreed that it be biodegradable.

Some throws have mass appeal, while others, not so much. Anyone who rides will relate to the sheer power of holding aloft a toy spear and watching the masses surge in her direction. I love flipping frisbees and scattering bouncy balls, but no one much wants them nowadays. Stuffed animals never go out of style, though they, too, have to be bigger and fancier to charm the crowd. I have a giant pink flamingo that is going to drive paradegoers crazy before finally finding its way into some small child’s bedroom.

There’s an art to catching throws, too, a kind of crowd psychology of Carnival etiquette that is not so much stated as understood. Plush toys go to kids nearby; you don’t step in front of the short girl as the float nears; you don’t let go when you catch a strand of beads simultaneously with the tall guy next to you. It’s a contest.

I don’t need to tell locals that New Orleans girls never flash for beads. That’s the mark of an out of towner, for sure. Although not everyone follows the rules. Back in the ’70s, I stepped on a doubloon preparatory to bending down to retrieve it, and the girl next to me beat me to the ground and bit my ankle.

Bags of beads that break windows or people who maim to snag a throw have traditionally been a part of Carnival. But there’s a camaraderie to the throw culture, too. These days, with so much divisiveness and partisanship, that’s what I like about it. Whether you’re throwing from above or catching from below, you’re part of something big and fun and communal and totally in the moment. I’ll take that particular stage any day.

Happy Mardi Gras to all of you.

Audio: French Quarter Madams bring green to their bustiers
Audio and Podcasts
We use cookies to ensure that we give you the best experience on our website. If you continue to use this site we will assume that you are happy with it.Ok