Preservation Hall has been bringing people into the French quarter since the 1950s to hear authentic New Orleans jazz. The Preservation Hall Foundation was created to make sure that continues, by nurturing jazz in the city. The organization’s Jazz In Class program sends musicians into the classroom to teach a new generation of performers. Recently we sat down with Preservation Hall Foundation Director Ashley Shabankareh to talk about the program — and, with Carnival season upon us, about the long legacy of school bands in New Orleans. 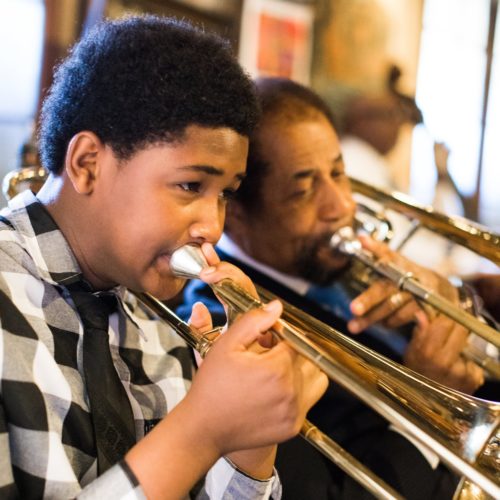 Q. Everywhere else, marching band season is in the fall, with football. But here we get a reprise with Mardi Gras.

A. New Orleans has such a really rich tradition with all things music, and I think it’s one of the most beautiful parts of Carnival time, in that you get to not only have the revelry, but you get to have the sonic representation of what our city is. And it really starts at quite a young age, unlike most other cities. We have elementary school programs as well as middle and high school programs and marching and Carnival parades.

Does a lot of our jazz start in the band room?

A lot of it starts in the band room. But I think being New Orleans, it starts a little bit more intrinsically, because we don’t think about the improvisation of life. There are so many choices that have to be made on a daily basis. And as we first start learning music, we don’t even think about the fact that our lives are filled with improvisation. And that’s a cornerstone. It really is. It truly is. A lot of times we don’t start with jazz as the first thing that we’re looking towards and learning. But in New Orleans, it’s almost like the reverse. We’re picking up on ear training, we’re learning through these very much traditional approaches. That’s our context and kind of the way that I view our indigenous music. It’s very much an oral tradition that we’re picking up on and then we’re building upon — just creating our own melodies based on what we’ve heard before.

So a program like Jazz In Class is not only about training the next generation of musicians, but also capitalizing on the fact that all of us here have that music built into our culture. Very, very much so. It’s not just about those musical skills, but how we instill a sense of self-esteem and confidence and 21st-century skills while also focusing on the musical aspects that really are deeply embedded here.

I do think that the jazz tradition, the music tradition, is in our bones somehow. When you look at all the iconic Mardi Gras music and the way we have exported that but also cherished it locally, it sort of defines us, don’t you think?

I would totally agree. When I think about the marching band tradition, I personally grew up all over the U.S. And so it’s so interesting to come to New Orleans and have a completely different view of what marching band is. In other states, it’s like a drum corps, an international style marching band, where it’s very regimented. And you have a whole stage show that’s on the football field. When you get to New Orleans, there’s like a more casual, relaxed approach to it. It’s about putting on a show for the audience more than anything else. It’s about having fun on the parade route and having fun musically together and it’s such a different mindset. Granted, there is still regimentation, in learning an instrument and learning music, but it’s a completely different mindset, because it’s really about being a part of the larger festivities that are happening on the streets themselves.

it’s so different [in New Orleans] because you want to have that interaction with the band, you’re excited when they start swinging around their trombones. Or, like, if you accidentally get hit in the face with the bass drum mallet, there’s something so fun about whatever that strange interaction is, that you’re kind of excited about it. Those sorts of things make you part of what is happening as they march down the streets. It’s a very strange, serendipitous thing.

The Carnival parade band is a cultural thing in itself. How does that work? Do the bands raise money through marching in the parades?

One of the beautiful things that I love about Mardi Gras time is that there is this whole sustaining aspect. A lot of the krewes do pay the schools directly to be a part of these parades. And it’s a really great source of revenue for the various programs, because that means you get to purchase instruments, new sheet music, things that are vital for your program. So it’s a really great thing for the schools getting to participate. You also have the beautiful sort of built-in advertising for your school in seeing the bands. I feel like that’s a big part of choosing where you want to go to school. It’s like, what band program do I want to be in? 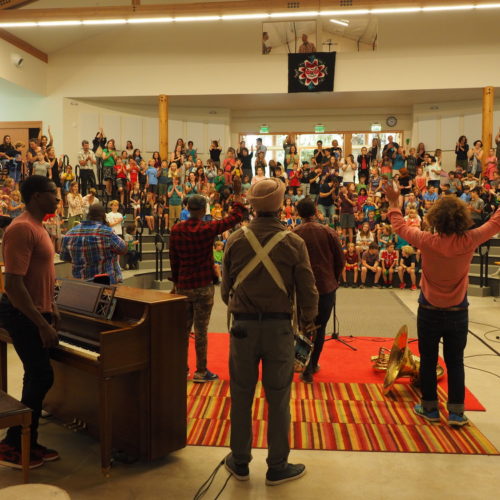 Jazz in Class takes music mentors into the classroom to literally pass the baton to the next generation. (Photo: Preservation Hall Foundation)

In 1967, the St. Augustine high school Purple Nights, the Marching 100, became the first African American band to march in a white parade when Rex invited them to do so. So they were part of the Civil Rights movement. Tell me about your Jazz in Class program and how it is continuing the school band culture and tradition.

Jazz In Class was started back in 2014. We were recognizing that, although there had been a rise in music nonprofits and support for music education programs, we weren’t seeing as many jazz and brass band programs happening. And for us, this is a really big and vital piece. So we were trying to figure out ways that we could basically train teachers, but also assist in the schools themselves. So for us, another key piece that we saw missing was these neighborhood musician connections. With students not going to the schools that were directly down the street from them, they didn’t have the same sort of interactions with our culture bearers. And so it was really a revelation moment, to actually partner them with schools. From that idea the whole larger program was spawned. It’s been really great seeing the growth of brass band programs overall. And it makes me really excited to know that there are so many young students, so much young talent that we’ve seen come through our programs, and then who have gone on to continue to play music. Especially this traditional music. So we work with schools. We pair them directly one-on-one with a culture bearer from the community. And it’s up to that culture bearer to dictate the course and the flow of what our curriculum is and work alongside the music educator to pass on that musical tradition. So it’s like having a musical mentor in the class to kind of guide them around.

Did many of the Preservation Hall jazz musicians come out of this tradition?

Yeah, most of them did come out of this tradition. And it’s so interesting to hear where they went to high school or how they transferred from one school to another and from one marching tradition to another. And what band directors they all had. So many of our musicians came from this tradition of going through the marching band programs and then doing things like going on to NOCCA. So there definitely are those other direct lineages as it relates to New Orleans music education.

Danny Barker started the Fairview Baptist Church marching band back in the ‘60s because he saw that there was a need to continue the tradition in jazz and brass band music. Some people have said that he saved local music that way. And I’ve heard other musicians say that music families gathered in the school, and that’s where they learned to do their music and then take it out on the streets. That’s what you’re saying, right?

That’s it. That’s totally it. And I definitely credit Danny Barker’s Fairview Baptist Church in a really big way with how we approach music education. So many of the musicians who played at Preservation Hall came out of that tradition. And it’s so interesting to learn from their approach. As a classically trained music educator, I learned so much from their ways that they approach music education. And I think it’s really crucial that that style continues, because it’s something that is so intrinsic to New Orleans.

Describe that style. Are we talking brass band?

I think it goes beyond just types of genres. It kind of boils down to ear training and listening. It’s a lot of playing a little bit of a melody, and then having a kid play it back to you, and then there’s a lot of interplay between. [Trombone player] Maynard Chatters, just a couple of days ago, said to me — we sat down and had some time playing music together — that he views teaching as a transference of knowledge. And thinking about it from that perspective is really what I think it boils down to. It’s a transference of knowledge from the elder musician to the younger musician. And that’s really what New Orleans teaching is about. It’s not about I’m teaching you. I’m imparting what I know and we’re going to learn from each other in the process.

Is there a local band contest?

There’s a competition called Class Got Brass, and that’s done through The Jazz and Heritage Foundation. And we serve as their partners for that. It is a super fun program and one of my favorite days of the whole year because it’s where all of the school brass bands come out, including a couple of schools from Baton Rouge. They all come together and they all play. There’s something so fun about watching kids cheer on the other kids and also having a lot of our elders come out and provide helpful feedback, but also like ultimately be there for the students who are competing in it.

Were you in a marching band?

I was in a marching band. Sometimes I have those moments of, oh, man, to be in a marching band again. And I’m like, no, I’m an adult. I should not do that right now. I could injure myself a lot more quickly than I could back in those days.

For more information on Jazz in Class and other programs of the Preservation Hall Foundation, fo to  www.preshallfoundation.org.