New Orleans has a new social aid and pleasure club. The French Quarter Madams is a women’s marching group that will take to the streets of the Vieux Carre in New Orleans on Friday. But, while these fun-loving local women are all about the usual Carnival revelry, they have a more unusual take on their hand-made corsets and bustiers. They’re thinking green. We recently sat down with Vivian Cahn and Tonia Aiken, founders of the French Quarter Madams.

Tell us a little bit about the French Quarter Madams and how it all began.

Vivian: We were members of another women’s krewe called the Divas. The Divas are about 15 years old, and known for hand-beading their bustiers. We wanted more of our friends to be able to enjoy this, so Tonia suggested that we start our own krewe, which we did, and she came up with the name French Quarter Madams.

We want to put the green in purple, green and gold, and so we are not emphasizing using plastic beads from China, but rather found objects, saved objects, unusual objects, things that are more recyclable and reusable. So we are emphasizing green and we’re not throwing beads. We are going to make things. We have refrigerator magnets, which I’m sure everybody’s going to want. We are giving out garter belts, which I know people will use. We are giving out these beautiful beads, but they are glass beads as they used to do in Mardi Gras. These are actually made in India and not China. 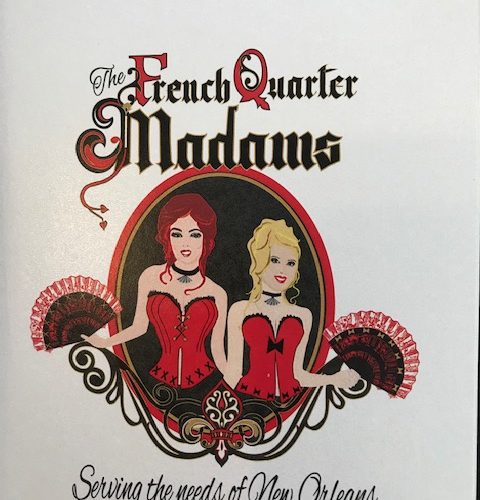 Tonia: We feel that, by creating this community of women, we can do a lot more than just have fun. We also have a community where anything that we have left over for the year, we will donate it to a favorite charity. We also have an extra thing that we’re doing with our club. Many of the female clubs, their significant other is not necessarily included. What we’re calling “gentleman callers” and the “escorts” are going to be having their fun while we’re upstairs at the Napoleon House, and then we’ll join in a culmination where we’ll parade, and then we’ll have an after party, where we have our significant others there.

You’re naming your group after the brothel owners of Storyville, who you describe as both strong women and early entrepreneurs.

Vivian: Yes, they were. They were early entrepreneurs. Women did not have as many opportunities then as they do now, but those women wanted to strike out on their own, make money, create a whole legacy for themselves, which they’ve done because people still talk about Storyville. I’m not supporting the sex business; I’m just saying that that is what they did, and we are honoring them by being the French Quarter Madams. This is also perfect for us because our band is going to be the Storyville Stompers.

You’re having fun, you’re socializing, you’re getting together with friends, but you’re also saying something a little more serious and making a statement about the environment.

Tonia: There are so many things that are affecting our environment today that are not being considered and not being taken care of. So we decided that we would encourage our members to use green, to use natural, to use things that are recyclable or reusable so that we’re doing a small part in helping the environment. And we’re also going to have fun that day, too.

Vivian: Plastic beads are toxic. The ones that are sort of iridescent are especially bad, and children tend to put those in their mouths. The workers in China labor under slave conditions to produce them. They can’t even talk to each other: They’ll be docked a day’s pay in some places if they even talk. I’m not going to get into the global economics of this. People in China need jobs; there’s a lot of people. But hopefully there are other things that the Chinese can produce for us that will be healthier for everybody. Tonia and I are both in the Krewe du Vieux, and Krewe du Vieux is going greener, as well. Their motto is, “it’s not the throw, it’s the show.” There are people in town now who have women in Africa making beads out of strips of magazines. They are more expensive but, you know, you don’t need a million beads around your neck, and they’re biodegradable. So, little by little, I hope the super krewes one day take note of this, too, and start using different things.

Tonia: Reusable, recyclable items. Things that you wouldn’t typically see on the normal beaded costume. So we’re trying. We even encourage natural flowers or leaves or whatever that might be.

How many members are there in your marching group?

Tonia: There are 60, and now there’s a waiting list. When Divas started out, it was just a few women, and they thought, we’ll wear corsets, go out to lunch, and there was a handful of women. By the next year there were 100 and a waiting list. Because, let’s face it, what woman wouldn’t like to wear a corset, sit down to a nice meal, and have a tuxedoed man waiting on them hand and foot? We all like that.

You seem to be able to keep the zaniness going while you also are being socially responsible. Isn’t that kind of ironic, or oxymoronic, or something?

Vivian: Maybe moronic? You know, it’s Mardi Gras, so there’s a lot of leverage and leeway. On our logo says “The French Quarter Madams” and then underneath it says “Serving the Needs of New Orleans.” Now, we actually did adapt that from one of the Blue Books (The Blue Books, for those of you who don’t know, were the Storyville rosters of prostitutes.). We did our research at the Historic New Orleans Collection, and one of the books does have that for one of the houses in Storyville.

There’s a moment during Mardi Gras, during Krewe du Vieux, and now during Madams, when everything just seems perfect and it just falls into place. It’s this cosmic moment, and I feel like I work the whole year just to experience that one second.

One thing I like about New Orleans is that people sit around and say, you know, that group’s crowded. I think I’ll just start my own group. That’s probably your basic definition of entrepreneurial.

Tonia: Well, we are both entrepreneurs. We both have several businesses that we own, and our attitude has always been that if you want something, go after it. I’ve always taught my kids, go for it. If you see something and you want to change it, do it yourself. Make that change. That’s what we did. We decided, let’s do something fun. We have all of our friends, we’ve included our spouses and significant others, and it’s much more of a fantastic Mardi Gras experience.

How can other groups get on this bandwagon? What are some of the things we can think about, not only on the floats, but in the streets, as well, to be more environmentally conscious?

Vivian: An idea like this, of pulling back a little bit on plastic beads and looking for alternatives, it takes a while. It made immediate sense to me, but for the collective consciousness I guess you’d call it, for people to see it a little different way, they just have to keep hearing the same message and experiencing things differently. Since I’ve stopped going crazy trying to ask people for beads or scream at people to throw me beads, I’ve really looked at the costumes and the floats. So much work and effort goes into that. I think people miss that because, in this frenzy to catch beads, which they then throw in the gutter, you really miss a lot of the artistry of the krewe.

Tonia: I know we’re still using a lot of plastic beads, and there are many different people who take the beads and then create art, all different types of artwork, or they actually use them for some benefit, so there is a flip side of that. If they’re going to use the beads, there may be some other alternatives as to how we can create something wonderful and useful from them.

So people can look for you on Friday afternoon, the Friday before Mardi Gras, in the French Quarter.

Vivian: We will be at the top of Napoleon House. There are two balconies. We’ll be flaunting our stuff and then we’re going to have a sit-down lunch where tuxedoed men will wait on us, and then our gentleman callers will come, and we will parade in the French Quarter, and then we go back to the Napoleon House. So our parade is from 1:30 to 2:30.

And you will be handing out environmentally correct gadgets, throws?

Vivian: I have some leftover nutria pelt from when we were the Sheik of Arabi in Krewe du Vieux and I’m going to cut those up and make little pins. Everybody needs a nutria pin. We’re going to have all sorts of things that we’ll give out.

Tonia: We will also be giving out our fans, because we’re known for our fans and that’s part of our logo. We’ll be handing those out, too.