The self-proclaimed “ultimate 80s cover band,” the Molly Ringwalds, returned to their roots in New Orleans with a performance at Southport Hall. A New Orleanian myself, I was already at home with the band. I grew up hearing my family and locals rave about their dedication to putting on an ‘immersive performance.’ I rounded up some friends to come and step into this time machine with me.

It was clear that we were the youngest fans in the venue. We got perplexed stares and looks. A woman standing next to me in the crowd even told me I was “so precious” in that motherly tone that is both patronizing and flattering.

It makes sense that the band’s main demographic would be those who grew up in the 80s. With the recent resurgence of 80s pop culture in the mainstream, though, the fanbase expanded. Us being there shouldn’t have come as such a surprise. 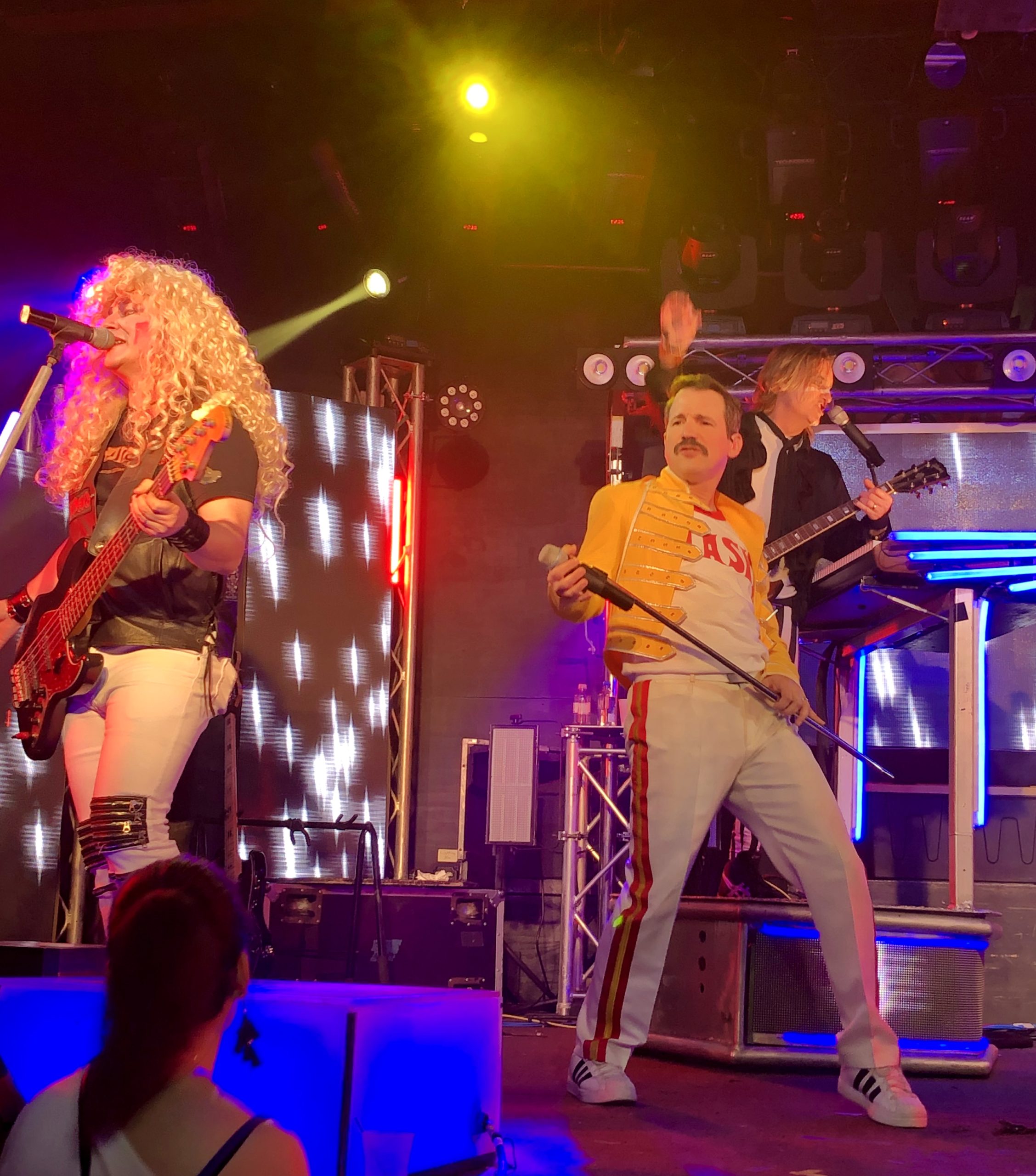 The Molly Ringwalds were one of the first bands to build an entire brand around capitalizing off of 80s nostalgia. Founded in 1999 by singer and guitarist Sir Devon Nooner, along with some fellow Brits, who had moved from England to New Orleans. In an interview with The Advocate’s John Wirt, the band has admitted that at the time of their formative years, resurrecting 80s music was not a popular idea. Guitarist Randi Wilde noted that: “By 1999, most of those who grew up in the 80s were young adults who associated that time in their lives with the embarrassment of puberty, big hair, and songs that remind them of their not-so-romantic first kiss.”

The music and fashion styles of the 90s and early aughts had a sleeker, edgier aesthetic. Grunge and R&B is a major departure from the glam rock and synthpop days of old. But the Molly Ringwalds were still passionate about performing 80s music and reveling in one’s youth.

As lead singer Nooner explained to Brooke Beyer, of WhereYat.com, “People come to our shows because they want to escape.” They played anywhere that would have them. The band grew more popular as their audiences aged and as the commodification of nostalgia grew more prevalent in mainstream art and media in the late 2000s-2010s.

They are, in other words, trailblazers.

The band does a great job of compiling almost every 80s pop culture reference into their brand, and their performance. They get their namesake from the actress Molly Ringwald, who reached the height of her career in the 80s starring in movies Pretty in Pink and The Breakfast Club. Though there was no Molly cameo at their performance, they kept the audience captivated with laser lights and pyrotechnics. The projector screened the music videos as a necessary referent to the form, thanks to MTV. Each member of the band dressed as a musician or character from that time. The band paid tribute to Freddie Mercury, The Karate Kid, Devo, Adam Ant, and Dee Snider.

But they are not just playing dress up. They perform as their characters. Each member’s solo performances fascinates because there is no lead singer. They rotate and each member gets to lead a handful of songs and let their character shine. Dickie English as Freddie Mercury was my personal favorite with that iconic stage presence and mannerisms.

Genre did not matter to them. They opened with Aha’s “Take On Me” igniting the buzzing energy in the room. They closed with Prince’s “Purple Rain” and then came back for one incendiary encore performance of “Paradise City” by Guns N’ Roses.

I remember in 2012 when I discovered “Come on Eileen” by Dexy’s Midnight Runners. I listened to it all the time. The fiddle over a steady drumbeat. The lyrics, suggestive, but not profane enough to worry my parents. I heard it in a movie, representing the first moment I was aware of the 80s in culture today. Music nostalgia has the power to make you yearn for a time you didn’t even experience. 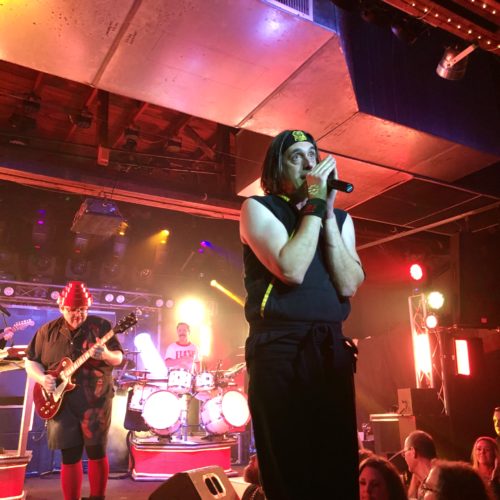 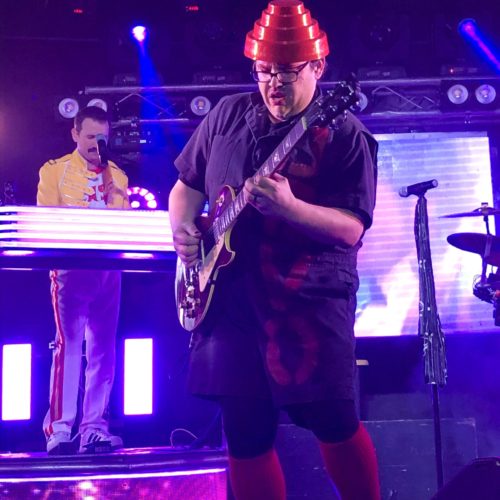 The band paid tribute to 80s artists by dressing up and performing in character. 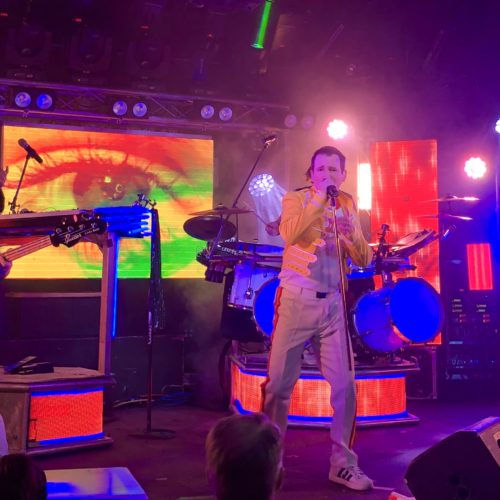 The stage design featured a laser light display and a backdrop of projected music video clips.

According to Lindsay Ellis’ Youtube essay on nostalgia, those who currently have the power to create culture were at one time just consumers of culture. Many were likely at the peak of their consumption as kids in the 80s. It is only natural then that many of their ideas and concepts harken to the TV shows, music, and clothing that shaped their creativity. In 2014, Taylor Swift released her fifth album 1989; the title is both a tribute to her birth year  and her take on the synthpop genre made famous then. In 2016, Netflix released its original series Stranger Things, the show takes place in the 80s when tensions from the Cold War peaked. The show’s creators have discussed at length in a 2016 Vulture interview how their obsession with 80s horror and sci-fi movies as kids influenced their vision.

As pop culture of 80s nostalgia becomes successful, it starts to pander to consumers. Are we at the point that whole decade of history feels like a trend? Maybe. But fans can tell the difference between what is genuine passion and inspiration from the era, and what is cheap exploitation.

The Molly Ringwalds definitely belong in the first category.

SHOW REVIEW: Anders Osborne’s Holiday Spectacular
Music
We use cookies to ensure that we give you the best experience on our website. If you continue to use this site we will assume that you are happy with it.Ok