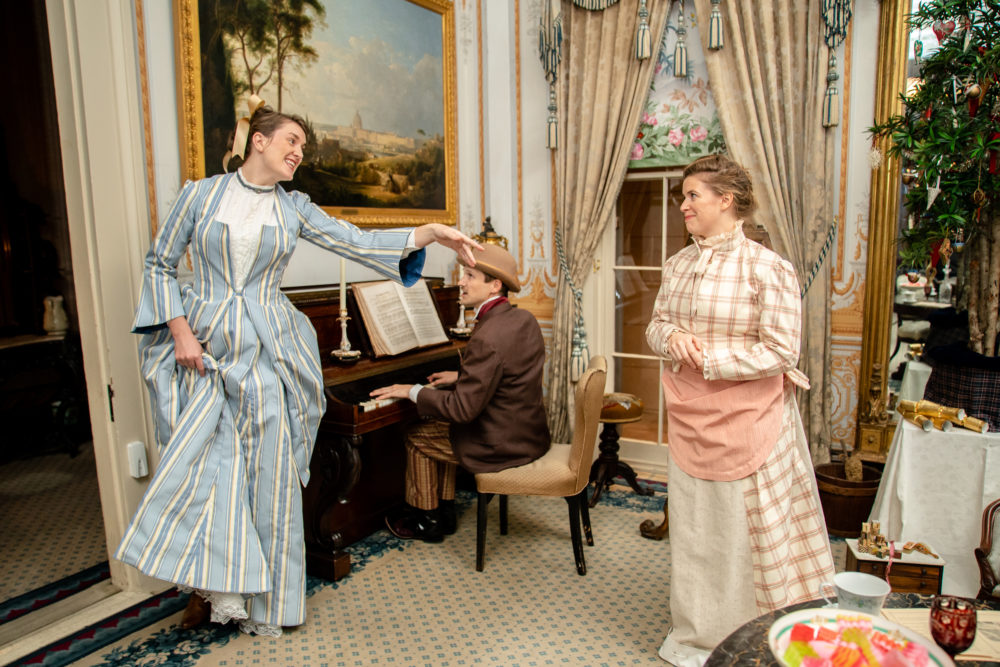 Imagine walking through dank fog on a wintery night in the Vieux Carre, as I did last weekend, en route to the Gallier Historic Home. Instead of navigating around drunken tourists and reveling college students armed with alcoholic hand grenades and Hurricane cocktails, I could have dodged violent young men on a rampage, members of the terrorist White League, running through the streets, yelling and flailing big sticks. Is it a futuristic, horror story?

No, this scene might have taken place more than 100 years ago during Reconstruction when a racial backlash opposing new rights granted to former slaves caused outrage and vengeance. The skirmish referenced in “The Uninvited” takes place in reaction to integration of the school next door to the Gallier House and is based on a real incident that occurred in December 1874. The original, immersive play was created through a collaboration between The Hermann-Grima/Gallier Historic Houses and Goat in the Road Productions, depicting Gallier family members sequestered inside their handsomely appointed Royal Street townhouse, fearful of rowdy young men protesting “forced mixing” of students in the public schools.

The small audience can follow individual actors from room to room, watching each scene play out, non-sequentially, over 90 minutes in two repeating cycles. Goat in the Road’s second drama set in an historic home, allows audience members to experience tensions that existed not only for newly liberated blacks, but for white residents caught in a dilemma. The plot is focused on an alleged beating of a white student by a black teacher who then ran away and hid, perhaps in a private home. A family friend, Jarvis (Ian Hoch), arrives at the Gallier home under the guise of protecting the family from intruders, but actually, with the intent of conducting a search.

When there’s a sudden rap on the front door, the audience feels worry about who might be on the doorstep in the middle of the night. Should the matriarch protect her own staff or allow the private home to be searched? 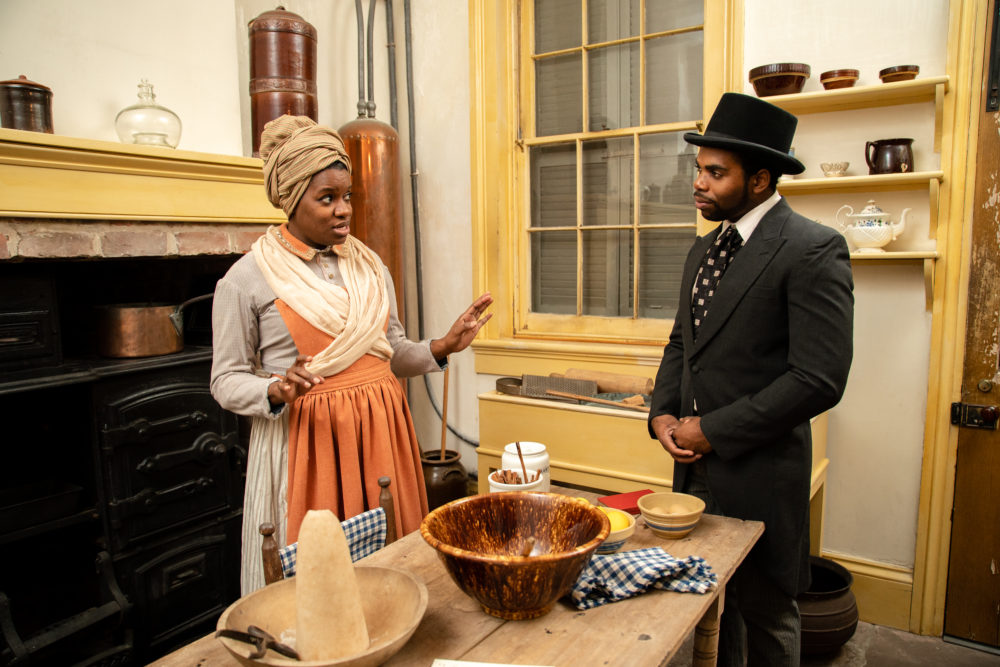 On the surface, all seems well in the Gallier home, but the black cook, Charity (April Louise), is displeased that Mme. Aglae Gallier (Shannon Flaherty), widow of the noted Irish architect James Gallier Jr., insists she wear a stiff, black and white, mail-order uniform. The cook believes she paid her dues fighting alongside Union soldiers, shelling the rebels, and the Freedmen’s Bureau guaranteed her certain rights. She does not want to wear a uniform. The country’s first African-American mayor Pierre Caliste Landry was elected in 1868. Her friend Moses (Brian Egland) says whites are “scared to death” blacks might make more demands.

The play underscores many 19th century societal changes. Servants are no longer dependably subservient. The Gallier girls are modern, outspoken, disinterested in marriage and ripe for worldly adventures. They are greatly influenced by the recently published novel “Little Women,” featuring four strong-willed female characters. “Suffrage was not included in the 15th amendment,” Blanche (Grace Kennedy) pines. Mme. Gallier worries her daughters are not marriageable, absent substantial dowries. She confides with James’ spirit, mourning the loss of her privileged life and social advantages for her daughters.

A terse argument between the German Jarvis and Irish Eamon unveils the friction between new immigrants. “You can overcome being Irish,” Mme. Gallier assures Eamon McCarty, who arrives to court Blanche. James (Gallagher) Gallier had done so, in part by marrying his French wife Aglae.

Goat in the Road’s 2018 production, “Stranger Disease,” was a collaboration with the Louisiana State Museum and Friends of the Cabildo, winning four Big Easy Theatre Awards (Best Play, Best Director, Best Ensemble, and Best Original Work of Theatre), as well as a 2019 History in Progress Award and an Award of Excellence from the American Association for State and Local History (AASLH).