Where did you sleep last night: Voices from The Listening Post

Each week on their WWNO radio segment, TLP explores issues ranging from healthcare and WhoDat, to tattoos and transportation. Listeners are able to contribute via TLP recording devices at local libraries or via a text messaging service, which then became source material for these programs. This piece aired on January 22, 2015. 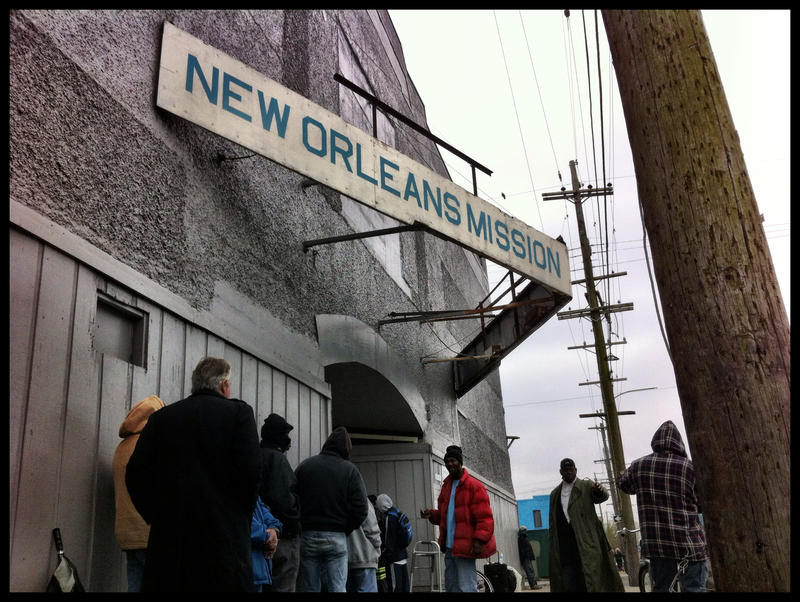 Thousands of people in New Orleans seek refuge at shelters like the New Orleans Mission. (Photo by: Jesse Hardman)

“Just like it’s our country’s duty to bring back all of our men and women from the battlefield. We also have a duty to make sure that every single veteran has a place to call home when they get here,” she said at a press conference.

New Orleans city leaders announced last week that they accomplished this goal a year early. A key player in that effort was Unity of Greater New Orleans, a local homeless resource center.

Martha Kegel is the Executive Director of Unity. She says many veterans who wind up homeless have severe mental and physical disabilities. Kegel says they also face a socioeconomic disadvantage when they get out of the military.

Kegel says in the end, the city campaign successfully housed 227 vets. More than half of these folks were in their 50s or older. But Kegel notes that nobody is saying ‘mission accomplished’, as every week more veterans become homeless in New Orleans.

“We have vowed that we will house every homeless veteran that becomes known to us within an average of 30 days,” she says. 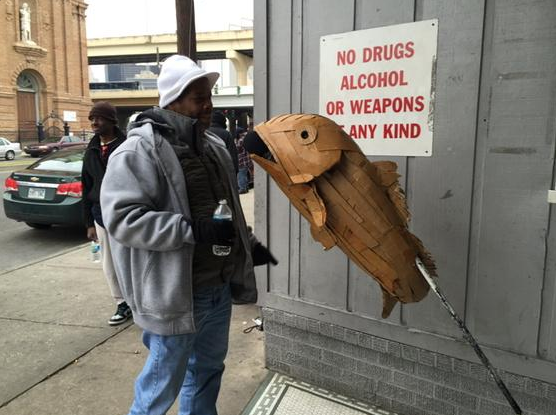 We took our listening fish to the New Orleans Mission to hear what it’s like to be homeless in New Orleans. (Photo by: Jesse Hardman)

Next week Unity is undertaking its annual count of homeless residents in New Orleans. Last year they surveyed almost 2,000 people living in shelters, on the street, and abandoned buildings. Kegel says homelessness is down 83 percent from its peak after Katrina. But rising rents around the city is causing trouble.

“We have a lot of folks here who are maybe a paycheck away, or a broken refrigerator away, an accident away from becoming homeless,” She says.

“I don’t think people plan to be homeless. Every individual case is different obviously, so that’s impossible to answer.”

“There are a lot of things that could cause a person to become homeless. Loss of an occupation/unemployment, divorce, loss of loved ones, or they could just choose not to work.”

“Disability, lack of affordable housing & lack of a support system”

“Life is hard! I’m well educated and employed and still don’t make much money. A lot of people aren’t as fortunate as I’ve been to have great support along the way”

“I think it just happens. The economy is just so messed up that it leaves you no choice but to be stuck out. Given that I was once homeless because my mom wasn’t able to pay the rent and times are just hard. I mean things just happen without you intending it to”

“2 weeks ago. We talked about how he tells jokes instead of begging for change.”

“I have never spoken to a homeless person, unfortunately”

“I spoke to a homless person maybe a month ago, I was homeless myself, marital problems, funds were not enough for deposit and move in.”

“I work for a homeless services agency, so I talk to homeless & formally homeless people often.”

“Most weeks at the Armstrong park farmers market. Our vendors like to help them out with food whenever they can.”

“I don’t actually hold conversations with them, I just offer them money or water if I see them sitting around.”

“We need to stop treating homeless with disrespect or ignoring them altogether. Both politically and as individuals. Our policies and laws are not designed with them in mind and look at them as a problem when the problem is clearly the system itself.”

“ I think we should build one-two bedroom homes in small communities with communal kitchens, and educate the people who reside in those homes on agriculture and becoming self sufficient.”

“Job training and vouchers, with rehab”

“A few cities are starting tiny house villages to help homeless people get back on their feet. I think that would be a great way to offer resources while fostering independence, redevelop blighted land, and create jobs to maintain the villages. I also think the concept has a lot of potential to incorporate sustainable practices like using renewable energy and creating subsistence gardens. Nola needs all of that pronto!!”

“I think a good idea would be to have these apartments that would allow them to get themselves situated. Give them a place of work and help them to get in a stable place. Homeless shelters don’t actually do much because there’s only a limited amount of people that could be taken in.”

Thanks to everyone who texted in. If you want to get our text messages and share your opinions for our segment, text the word “hello” to 504-303-4348.

We also took our trusty listening fish recording device to the New Orleans Mission in Central City to hear from people waiting in line to register at the shelter.