Added lenses to an unlimited sushi experience in New Orleans 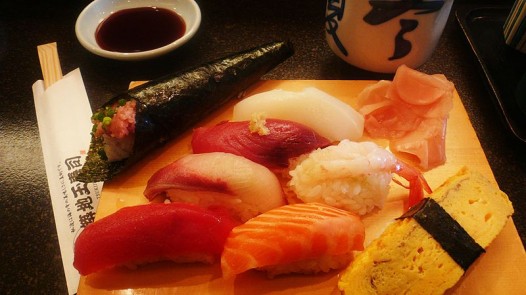 As we approached what we heard to be the legendary sushi restaurant, my stomach began to growl. This was my first time at an “unlimited” type sushi place, and I was very excited as was everyone else in our 20 + all-male crew. After quickly assessing the menu and how much everyone could eat, I raised my hand in the air and made eye contact with the waitress; yet, she did not acknowledge me. This left me slightly confused. After conferencing with the people at the table, they told me I might have to bring it to her, or to the chef. Somewhat deluded, I thought that was why she ignored me, so I stood up, and delivered her the menu.

The waitress received it with a puzzled look, but proceeded to take the menu. Clearly pleased with myself, I walked back to the table with a grin on my face, and the whole table began to smile. From that point, we waited less than 5 minutes before the appetizers were delivered.

This was the point when everything went south. It was as if a tornado was about to hit the restaurant, but nobody saw it coming.

As soon as the appetizers were devoured, people started complaining that what they ordered had not arrived. I assured everyone that they were probably coming in the next round of food. Unfortunately, hungry people aren’t always so keen to listen. My table began to get very rowdy. People began to stand and scream for food, as if that would make the food arrive faster. The frustration appeared to reach the point that boys were going to start flipping over tables.

As more food was served and devoured the rudeness began to simmer down for a minute, but I was left with that image of our peak disturbance in my mind. At any point where there was no food, the complaining continued, “This sushi has too much rice…Where is all the sashimi I ordered?” We must have been every waiter’s nightmare. People continued to complain that they had not received what was ordered, and I finally snapped saying “Just order it on the next fucking round.”

Finally, it seemed as though people were ready for the check. At this point I was hoping that people would tip a minimum of 20% to make up for the scene we caused. I was sadly mistaken, as another friend stood up and said, “We shouldn’t tip; this was the worse service I’ve ever received.” This sentiment was received well by many of my peers. At this point I was about to explode. I proclaimed “We made a big-ass mess. We are definitely tipping. I’d suggest a minimum of 20%. If you don’t tip, don’t come back.” This was not met as well as the previous sentiment. I left stuffed and unhappy with my peers. I was sick in my stomach in a different way then I thought I would be after leaving unlimited sushi.

Lens One: Gentrification at the sushi restaurant

Essentially college students are transplants living in New Orleans while they complete their undergraduate degree. By doing this they can become part of the problem of gentrification. Gentrification hurts the culture of the city and the people who have been living there before the “transplants” arrive. “One reason we have such intense gentrification pressure in urban neighborhoods is that we stopped building them in 1929 after the stock market crash. We started building again after World War II—in suburbia” (4). “So now we have a scarcity of urbanism when the cultural preference is for urbanism. Who’s going to lose the bidding war? Low-income people and people of color” (4). Now let’s bring this back to the waitress and how she was treated at the sushi restaurant. She was not given the respect she deserves, nor was she rewarded for putting up with us. The feeling of sickness I had leaving the restaurant was not related to the food, but instead I felt queasy to the company I was with. They left me feeling sick that they could think it was OK to treat a place and person with such disrespect.

The service industry  relies on people being decent. New Orleans, LA has a reputation of southern hospitality. People are extraordinarily nice, but the niceness sometimes comes with slow service. As a native New Yorker, I know as well as anyone how aggressive and merciless people can be. There are a lot of people from the north that come to school in the south (transplant living). I learned through this experience that not everyone was taught to treat people with respect, and that was a hard lesson for me to learn. The “golden rule” was preached to me at a young age, yet very few adults follow it. I keep hearing the phrase “it’s a dog eat dog world,” and this symbolizes that people think it’s all about them and don’t pause to see the bigger picture.

In the circumstance, none of my friends or myself paused to consider the waitress’s life, how many jobs she may work, or the struggles she may be going through. We were all focused on ourselves and having as much filling fun as possible. This is a serious problem in society today. Everyone’s so focused on himself or herself that they don’t see or even care about anyone else. This is especially an issue in New Orleans as the wage disparity is very noticeable as, “the top 1 percent of families makes 18.1 times what the bottom 99 percent of households does. Just 1 percent of families scoops up 15.4 percent of the state’s income (3). The average annual income for the top 1 percent of households in the state is $814,386; average wages for everyone else are $41,600” (3). This is significant for it causes a bigger divide between the upper and lower class. This leads to certain industries suffering more than they should.

The hospitality industry is not a New Orleans-centric problem, but the south, and especially New Orleans rely on tourism to maintain welfare. Southern hospitality is a representation of the south. It represents a culture of laid-back people, which are well taken care of. In New Orleans, a standard tip is 15% (2); yet I have seen friends not tip, or give less than that depending on the size of the bill. The average hospitality industry wage in New Orleans after tipping is $34,220 (1). For an industry that employs over 15,000 people (1), that is shocking.

When writing this article the neologism that comes to mind is Freetion: A state of chaos or havoc that requires complete focus on only survival; one would not have the ability to worry about anything beyond the immediate situation (Mia Edelson). You could say that I could feel the freetion in the air during my unlimited sushi session.

4. “Stop Blaming the Hipsters: Here’s How Gentrification Really Happens (and What You Can Do about It).” Brick Underground, 15 Feb. 2018, www.brickunderground.com/rent/what-causes-gentrification-nyc.

Cash only, a look at wage disparity in New Orleans
Reflections