You butter believe it: Eating in New Orleans 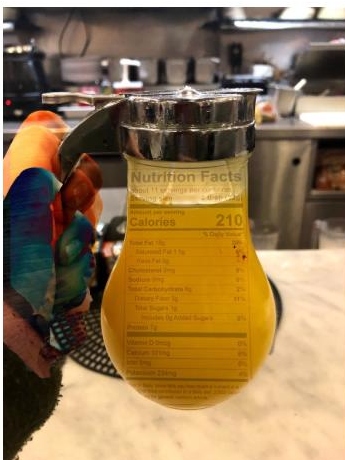 The butter that I thought was orange juice. (Photo by: Emma Fein)

As I approached the famous, authentic New Orleans style landmark diner, my eyes panned down from the pink LED light letters reading Camelia Grill to the long line of customers out the door. Based on the succulent smell of food wafting outside, my mom and I knew it would be worth the wait.

We finally got seated at a counter that extended through the entire restaurant full of gregarious waiters and cooks. The menu was similar to a typical diner back at home, in New York, but instead of a plain veggie omelet they serve ones with chili on top and instead of getting a side of whole wheat toast they offer fried mac and cheese bites. Overwhelmed by the heavy food options, we ordered a veggie and cheese omelet with hash browns, mac and cheese bites and a stack of pancakes to share.

My mom immediately broke out in laughter. The harder she laughed the redder my face turned.

By the confused look on my face she knew I needed further explanation.

“For the pancakes,” she added. My mind quickly started to calculate the calories packed in that handle of butter. It was in that moment that I fully understood the mantra “Only in New Orleans.”

Each city has its own foodism: an ideological food culture that is deemed as a part of its society. I think a city’s foodism reflects not only the people’s relationship with food but also with themselves and each other. In Kevin McCaffery’s documentary, We Live To Eat New Orleans’ Love Affair With Food, chef Frank Brigtsen posits, “I think what separates us in Louisiana from the rest of the world about food is we are so emotional about it. We crave certain things that we’ve eaten all our lives. Just because a dish is 200 years old doesn’t mean it’s not good anymore, and we never get tired of gumbo or trout manila because we have such wonderful memories associated with those dishes and we have a responsibility with our traditions too. If I as a New Orleans chef doesn’t make a good gumbo, who will?”(1).

In New Orleans, the more fried the better, and no amount of butter is ever enough. The cuisine consists of endless  meals that have been passed down generation to generation and have been engraved in the heart of the culture over time. Food cooks up memories with family and friends and whips up happiness. New Orleanians look at the jar of butter half full, enjoying each bite.

So, when in New Orleans, right? The second the waiter served us the pancakes, my arm surged for the butter. My mom said to only use a little bit. Within one bite, I realized this is exactly what my childhood had been missing all those years.

In first grade, I had to create a drawing about my favorite restaurant, and without hesitation I wrote my home address. My mom has always been a phenomenal chef, and I love being her sous-chef in the kitchen: whether it’s chopping the vegetables or just keeping her company. Nightly dinners were the time of day that my dad came home from work and our whole family would gather around the table to talk about our days.

However, as I grew older I started paying attention to what I consumed in regards to its nutritional value because I wanted to improve my body image and feel more confident. Baked ziti was always my favorite dish, but over the years the pasta got substituted for zucchini zoodles, the ground beef changed to ground turkey and the cheese turned low-fat.

Growing up in New York, body image has been at the forefront of my upbringing: from watching TV shows that projected lean characters, to looking at magazines with stick-skinny models and even sharing clothes with my friends that were always a size smaller than me; I have always felt pressure to stay “in shape.” Of course, “in shape” is a relative ideology that takes on various meanings throughout different societies. The ideology I grasped onto was obtaining a defined jawline, flat stomach and thin legs by working out daily and counting my calories. The environment I grew up in caused me to directly connect my food intake to my body image, and furthermore to my happiness; that is, until I moved to New Orleans.

After the last bite of the butter-dressed pancake left my plate, I felt my stomach bulge, jeans tighten and appetite ruin. I felt betrayed: the butter that I enjoyed eating so much immediately turned into my worst enemy. Subconsciously, my mindset was cooked up in food racism: when certain foods are excluded in favor of the dominant, usually white, culture’s idea of good food (2). Food racism is rooted in both economic and societal factors. Cheaper, more accessible food is usually less nutritious and more typical for the non-dominant culture. For instance, the common use of butter in southern cooking is perhaps a staple not only for its flavor but cheap cost. However, this racism also consists of societal health expectations and the effects the food has on the body, which is how I felt whilst indulging in the butter coated pancakes. I knew with each bite came more calories, and eventually fat packed onto my body.

Throughout history, there have been huge shifts between society and its relationship to food in regards to body image. Supermodels have been at the forefront of this by posing in pictures to be posted in editorials and strutting down the runway, setting size 0 as the status quo . Over the past century, the editorial world has been granted the power to set the ideal body by selling them as commodities. They directly connect the 6-foot slim model to happiness that people believe they can achieve. However, different body types have been deemed as the ideal body. There is no consistent expectation of what body type will be in style, as they say on Project Runway, “In fashion, one day you’re in, and the next day you’re out.”

There is more to the guilt I felt in devouring the pancake than the way I felt in terms of my body image. There is also a health and nutritional aspect to food racism. One of the overbearing problems with New Orleans food is its correlation to various health issues, one being obesity rates. The nonpartisan Trust for America’s Health and Robert Wood Johnson Foundation have found that Louisiana’s obesity rate tops 36 percent as of 2018 (4). Possibly the reason for this is because “in shape” takes on an alternative definition in New Orleans than mine from growing up in New York.

“In shape” to New Orleanians refers more to the people’s emotional state rather than physical state. They put their heart and soul on a pedestal. The city has set a status quo that’s easy to upkeep: eating flavorful, fried foods with family and friends, so there’s no need to break it.

The even larger problem in regards to obesity in New Orleans is how much it’s overlooked, and this is because of the beliefs and dynamic of the city itself. Mackie Shilstone, director of the Fitness Principle at East Jefferson General Hospital states “Sixty percent of parents that had overweight or obese children didn’t know that they had overweight or obese children because the social mores, when all the kids get together and all the parents get together, everybody looks the same. So everything must be fine, and in fact, it’s a time bomb”(5). This idea goes back to the foodism concept: New Orleanians have deemed their food as the societal norm because the way it affects their appearance has been mutually accepted by their society.

To indulge in New Orleans cuisine full of butter, oil and fat is the proper way to assimilate to the city of New Orleans. A study on investigating the effects of healthy and unhealthy descriptive norm messages on food choice points to the fact that the social environment plays a great role in food choices people make on a daily basis (6). Descriptive norms refer to the behavior of most others in our social environment and influence actual food choices people make. In essence, the issue actually doesn’t pertain to health problems, rather ideological societal norms that aren’t questioned. These ideological norms consist of foodisms and how they’re perceived in society. This has been embedded throughout the history and evolution of the New Orleans culture.

This piece was written for the class Alternative Journalism, which is taught by Kelley Crawford at Tulane University.

Nola Mural Project: A celebration of free speech and artistic expression When having an artist paint a mural on his exterior wall almost put Neal Morris in jail, he did what any art-loving New Orleanian would do -- he started a non-profit called the Nola Mural Project, which pairs walls in the city with artists.

How can neighborhoods develop without displacing black-owned businesses: Voices from The Listening Post
Audio and Podcasts
We use cookies to ensure that we give you the best experience on our website. If you continue to use this site we will assume that you are happy with it.Ok