Krewe: Reversing the musician exodus from a city defined by music 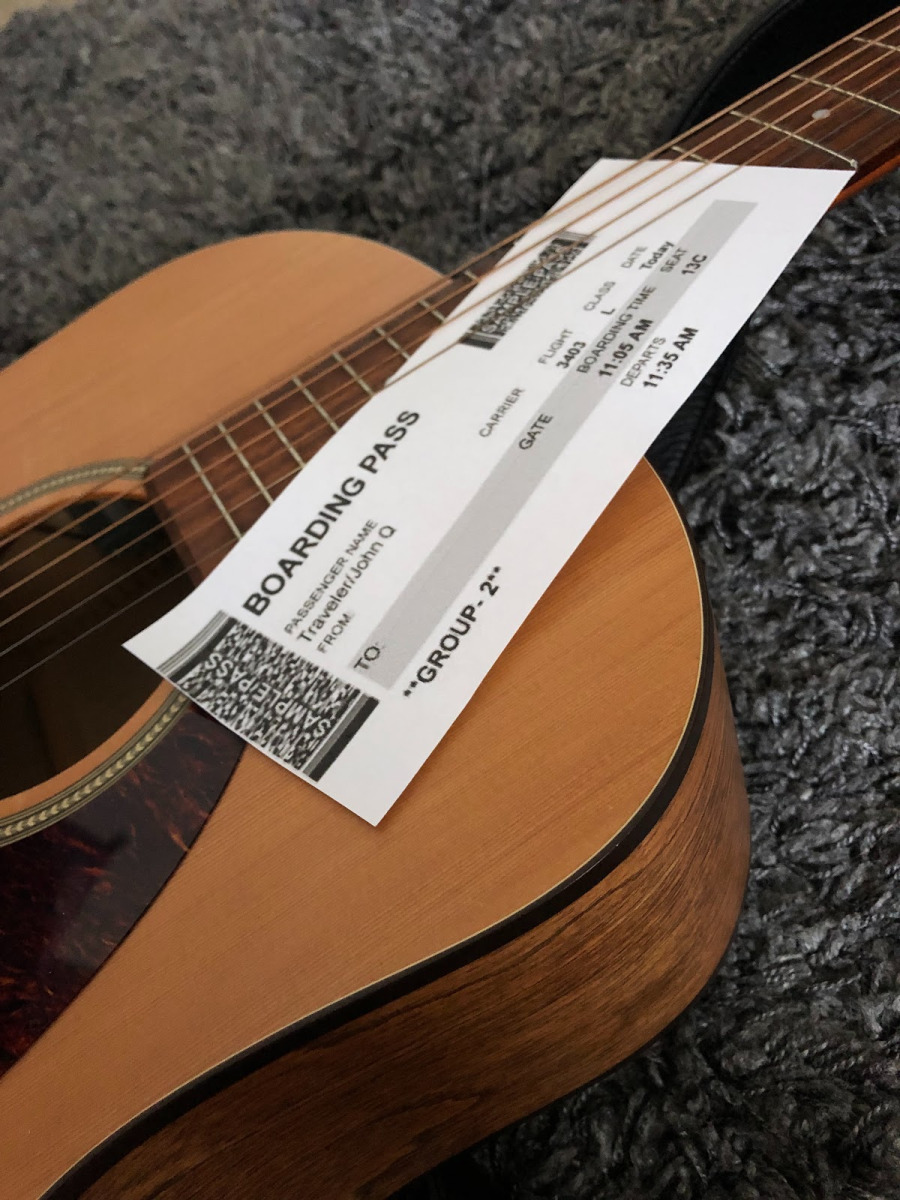 Guitar with a ticket out of New Orleans. How can we keep musicians our city is known for? (Photo: Libby Tisler)

A while back, Rob Kellner’s incredible piano skills filled the ears of many attendees at the Sunday of French Quarter Fest. Backing Maggie Koerner, Kellner could be found perched behind his keyboard on stage right. A pair of round sunglasses let him see his keys a little better through the sunny day. Kellner smiled to the crowd, his curly hair moving with him as he played. With a humble bow, he exited the stage and into a car to travel to Indianapolis that same night to open with Maggie Koerner for Tank and The Bangas for a run of their tour.

Kellner is happily able to refer to himself as a full-time musician. Music is his passion and his job. Music also pays the bills. It is also something he has worked extremely hard for. Back in 2013, Rob Kellner caught a glimpse of New Orleans’ vibrant music scene. He could stroll down the city streets taking in the sounds of jazz flowing out of a bar while a brass band was playing on the next corner.

A few months later, Kellner walked the streets of New Orleans as he began studying at Tulane University. Right away he felt connected to the unparalleled music here.

“The music scene in this city was so welcoming and accessible,” Kellner describes. It wasn’t long until his entrancing and passionate piano skills found him playing in the very same bars and venues he admired from his previous visit. Fast forward a few years and Kellner’s success has only grown. His soul-pop band, Miss Mojo, has achieved a high standing locally and even started touring across the country. He is also able to reach different audiences while playing with Maggie Koerner.

This, however, is not the story of many New Orleans musicians, as talented as they may be. These musicians take the same walk down the same streets. There is no large record label on the corner, no publishing companies next to bars, nor booking agencies, and management companies are few and far in between.

As a city, the emphasis rides largely on live music. “There is almost no infrastructure in terms of supporting artists and songwriters, publishing, licensing, and a lot of different things that make up what we understand to be the music industry,” Kellner says. These “are ways for people to make money and support themselves as artists and incorporate themselves into a larger national picture of what the music industry can be.”

It is for this reason that many young musicians decide to pack up and seek business opportunities in other cities where the infrastructure is further developed such as in New York, Los Angeles, and Nashville. While New Orleans has a lot of growing to do with their music business, moving elsewhere pulls musicians away from something truly special.

Kellner deeply reflects upon all that New Orleans has to offer when he explains that “the community and cultural value of music in the city is unparalleled. There is a lot of value of music in other cities, but I don’t think there is anywhere else, maybe in the world, where it is so much a part of how people identify themselves and just live and make sense of the world,” Kellner shares. “To be able to make music alongside people who have been doing it for so long or other prolific artists and a community that really respects and values what you create is a really positive thing.”

A recent graduate of Loyola in New Orleans, Jared Mintz is a major contributor to the music business in New Orleans and shares similar sentiments to Kellner. He found himself walking down the New Orleans streets and into one of the city’s music venues and, today, is in charge of booking music for The Willow, Uptown. An 800-capacity venue, The Willow hosts a large variety of both local and touring artists. Maintaining a thriving scene of young musicians in the city is important to the culture and the live music scene.

However, in the eyes of young musicians it is easier to move to a city where the music business is currently thriving and they see the means that help them grow as a musician. Until more music infrastructure comes to New Orleans, the musician exodus will likely continue. “I completely understand it,” Mintz says “however, I do think that all the musicians who are leaving could be a bit more cooperative with each other and maybe we could start [to] get something rolling where we have young musicians and bands making money.”

Until it comes to New Orleans (or doesn’t) Mintz’s suggestion is that musicians should stay and take it upon themselves to jump start their careers. It is a little more challenging when the opportunities aren’t glaringly obvious, but that isn’t to say there aren’t plenty to be made. When it comes to playing live, Mintz says, “a lot of musicians don’t try hard enough to figure out what gigs are available to them. There is an insane market for tourism and also wedding tourism, bachelor parties… all these things you never associate with the music industry because you are trying to write your own songs… But there are more gigs here that you don’t even know about that pay really good money.”

The music business exists and thrives in New Orleans, especially when it comes to live music. This is how Mintz and Kellner make their living. However, the clear path to fame for many artists is to move out of the city. With the recent development of the New Orleans Music Economy Initiative, the city shows signs of moving in the direction of development. This is a large undertaking and a process that likely will take some time to fully come to fruition.

In the meantime, there are many people making an effort to develop the industry here. Mintz emphasizes the abundance of opportunities that musicians are often unaware of. Being educated when it comes to the music business sheds light on opportunities that exist but may not be as obvious. Tulane University undergraduates, Emily Baldridge and Sam Bruchhaus, are working to educate young professionals and bring music industry opportunities to the hopeful community here.

In January of this 2019, The Tulane Sports and Entertainment Business Society, or SEBS, was created as a new club on campus. This club hosts several branches of the entertainment industry including sports, film, and music.

Both Bruchhaus and Baldridge are active members in the New Orleans music scene and serve as inspirational club founders. Baldridge is currently interning with the Live Nation Marketing Department and serving as the Digital Marketing director for New Orleans Brass Fest where she brings creative insight and energy. Bruchhaus is the assistant manager for “The Bummers” bringing his skills to multiple areas of the band’s needs and is currently working to develop a media resource business.

Bruchhaus and Baldridge took a risk with forming this club and hope to find members that are willing to take risks, also. “Part of my ‘canned pitch’ of SEBS was ‘A,’ we want to find hungry kids who aren’t afraid to fail… because ‘If I fail I learn something… at the end of the day I can recover easily, I’m 18, 19, or 20.’ And the second part is creating opportunities. That’s what it’s about. It’s about application. That’s one of the things I want to improve upon, and that’s one of the things we are committed to,” Bruchhaus explains.

Tulane University offers limited classes pertaining to the music industry so this club aims to provide students with valuable resources and information to help them succeed, as well as provide them with real experience in and around the city.

The two undergraduates have a passion and hunger to succeed, which is prevalent when  speaking about the club and the music industry. “We have been trying to offer that basic education: having speakers come in and talk about specific things. Like the difference between a publishing company and a record label…. We are trying to get to a level next semester where we can go out and do more applicable-based learning through the club,” Baldridge explains.

Their hard work and dedication is helping to bridge the learning gap that is found among students interested in the industry here at Tulane. Just beginning a few months ago, the club already has a sizable membership and has hosted many guest speakers who are successful in the industry. Club members have had the chance to learn about music entertainment law, publishing companies, and record labels while growing their network.

SEBS pours a lot of energy into giving back to their members and focusing on the music. “At the end of the day, it’s about the artist… We want to be really artist based as a club,” Bruchhaus emphasizes. With big plans for the future semesters, this is a theme that will surely continue to shine through.

Kellner and Mintz spoke about the incredible music culture here and the importance of creating opportunities and these two students are doing just that. They recognize the large population of students with an interest in varying aspects of the industry. “It definitely is about ‘doing’ and that’s what we are trying to do. Sure it’s going to push people out of their comfort zones, but it’s the steps that we need. And everyone is the club has already expressed so much interest. They’re ready for it because they’ve been starved of it. That’s what they came here to do, this is what they want to be doing and that’s where the whole idea of the club came from,” Baldridge says.

The founding of SEBS is a step in the right direction for developing a strong music business in New Orleans backed by educated and passionate individuals. In the meantime, what will artists decide to do?

Maybe they will decide to stay and hope to become full-time musicians like Kellner. Maybe they will try to get booked by Mintz for a show at The Willow. Maybe they will become young entrepreneurs like Baldridge and Bruchhaus and help pave the way for new opportunities in the industry. Or maybe they will move on and move out. But there is no music without musicians. Kellner knows this: “As artists, to be representatives of this city is really important.”

Krewe: Hey (DJ) Soul Sister
Extra/ordinary
We use cookies to ensure that we give you the best experience on our website. If you continue to use this site we will assume that you are happy with it.Ok