My costume is not consent

I hopped off the back exit of a school bus-turned-party bus to find myself following a chaotic herd of people dressed in sequins and neon hair extensions. Locating my friends, we headed toward Frenchman Street for my first Krewe du Vieux. Cheering people lined both sides of the street — their hands filled with beads and alcoholic beverages. I caught the eye of a 4-year-old boy perched on his father’s shoulders, wondering: what is a child his age doing at a parade where people get struck by flying condoms? 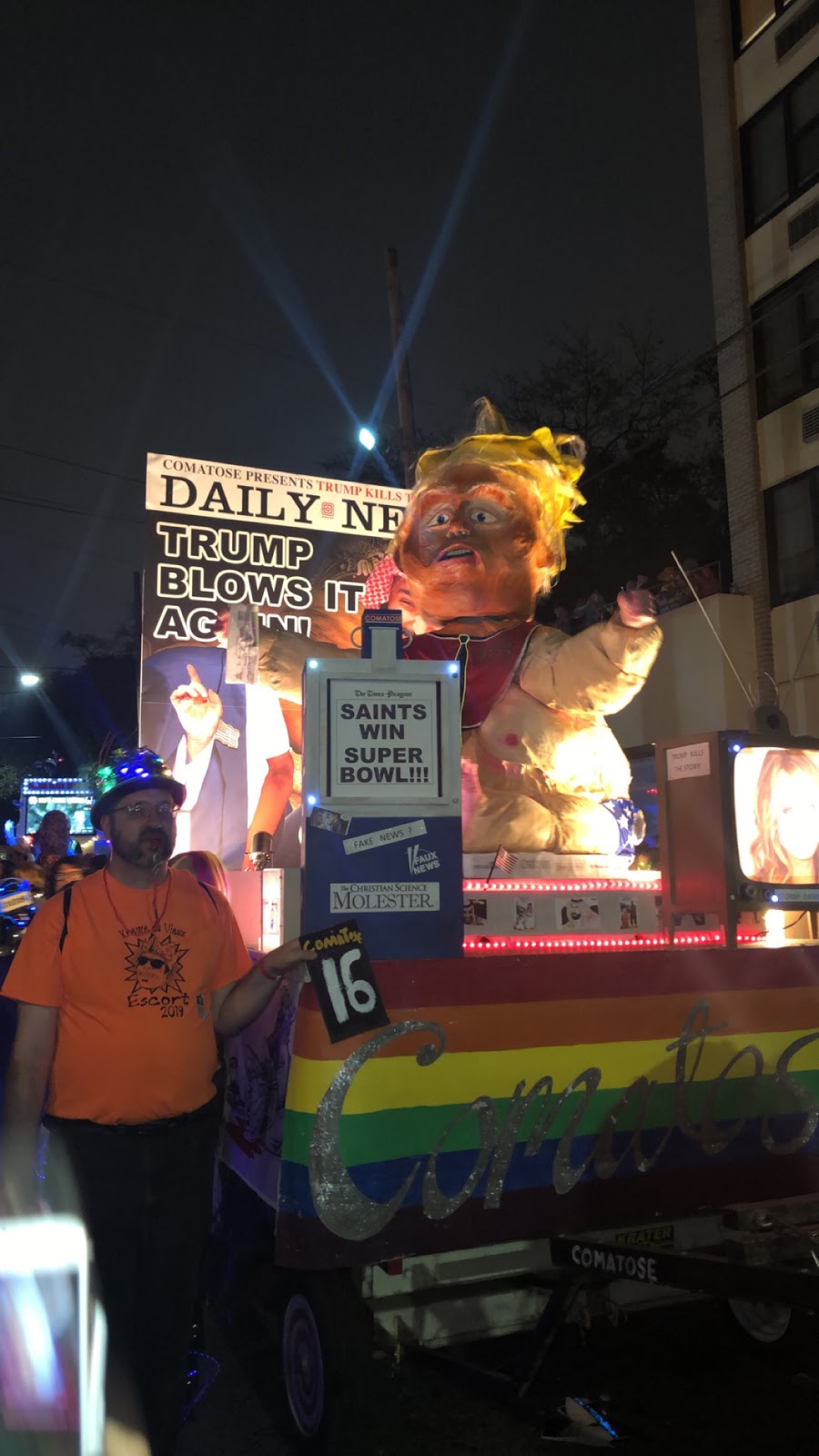 These parades are known for their wild displays of sexuality, and seeing as women’s bodies are constantly commodified in our society, there is a special form of objectification that takes place during Mardi Gras. Disrobement, or beads in exchange for removing articles of clothing, has been popular during Mardi Gras parades (specifically those on Bourbon Street) since the 1970s. While both sexes have actively participated in this custom, the fact that a sign saying, “SHOW YOUR TITS,’ became commercialized on t-shirts, buttons, and a variety of French Quarter paraphernalia” emphasizes how women’s bodies in particular have been commodified at Mardi Gras for decades. It is important to note that most of the women choosing to engage in disrobement are not forced and many refuse requests to do so. The problem, then, is not necessarily with disrobement itself, seeing as everyone has the right to display their bodies as they wish. Rather, the real issue is the warped perceptions of the way women’s bodies should be treated that stem from the unique practice. To many, the fact that a woman wears an outrageous costume implies that she consents to being touched. I am a woman who wore such a costume, but my costume did not mean consent.

As floats rolled down the street, flanked with brass bands, I reveled in the witty puns and felt a sense of pride when I shouted out at a float that was giving away pins with Ruth Bader Ginsburg’s face on them; in no other city would I be able to do such a thing. I grinned as a woman holding a stop sign handed me a sticker of Brett Kavanaugh’s headshot, with the words “Supreme Cunt” covering his shoulders. I silently savored this moment, as I wanted to remember how liberating it felt to be in a place that so freely speaks out against what is wrong in our society. Not even a few seconds had passed before I suddenly felt someone grope the back of my leg, and I whipped around to find an older man sneering as he sipped a beer with his other hand and gave me a wink.

On my way home that night, I played the incident over again in my head, which led to a conversation with myself about what had occurred. I came to the conclusion that bringing other voices into the dialogue would help me find more clarity. Leah Ryan is known for expounding on the lives of service workers through creative writing. She compiled a series of pieces, one of which being “No One Here is Irish” by Kristen-Hall Geisler. The story tells of a waitress named Sam who sells t-shirts at an Irish pub by peeling them off of her body. Michel Foucault, known for opening the way to post-modern theories, was a French philosopher, social theorist, and literary critic. His work, “What is an Author” highlights the different identities that an author must embody while also being careful to not prioritize one over another. The following dialogue is how I imagine a conversation among all of us would transpire:

Talia: Why do I feel the need to justify the actions of a man who made me feel violated?

Sam: Because the world is a screwed up place. He was an asshole, but “it’s [your] fault he’s an asshole.”

Talia: Maybe you’re right. I voluntarily chose to attend a parade that can only be described as vulgar, and, I thoroughly enjoyed myself. Does this mean I gave up my right to feel offended by what he did?

Leah Ryan: You often believe you are at fault when you aren’t. This behavior has become common sense in our society — women are made to feel as though they are overreacting if they voice discomfort when being touched. The concept I would like to propose in response to this behavior is appropreaction: an alternative state of existence in which the strong reactions women have to being touched are understood as appropriate and rational.

Sam: That’s not the way it works, though. Appropreaction isn’t real.

Leah Ryan: Unfortunately, it isn’t. You were taught that catcalling is just something that happens, something you have to deal with. Your mother warned you to dress conservatively when going to bars because boys might get the wrong impression based on how much skin you show. Because our society often blames the victim.

Talia: Honestly, he barely touched me; it really wasn’t that big of a deal. I don’t think I have sufficient reason to be upset.

Leah Ryan: Tell me why you’re upset, then.

Talia: Because what kind of woman would I be if I didn’t have a problem with someone groping me?

Michel Foucault: I ask a question in response: “How can one attribute several discourses to one and the same author?” You, Talia, represent one author. Society has imposed a discourse upon you, one that has led you to believe that you should pay no heed to unwanted sexual advances. A second discourse is attributed to you, a discourse that encourages you to be a strong woman in a modern world who speaks out when she feels uncomfortable. You must learn how to play both parts, how to embody both discourses.

Talia: But I want a more defined identity. You once said, “there must be–at a certain level of his thought or desire, of his consciousness or unconscious– a point where contradictions are resolved.” What should I do with the factor of wanting to respond to injustice but feeling pressure to do the opposite? How do I resolve the contradiction?

Sam: Good luck with that. My breasts have been photographed hundreds of times at work and the entire time I feel “fake, phony and bored.” Each time it happens I want to knock the camera out of their hands. Instead, I “[cock] one hip and smile.” So that’s my identity. But it pays the bills.

Michel Foucault: My answer is this: “If among several books attributed to an author one is inferior to the others, it must be withdrawn from the list of the author’s works… the same should be done if certain texts contradict the doctrine expounded in the author’s other works.” If a more defined identity is what you seek, then separate the inferior discourse from yourself, just as you would withdraw an inferior text from an author’s collection. 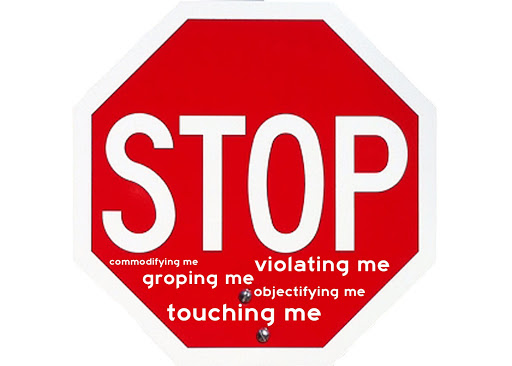 There have been an infinite amount of conversations regarding this topic, and there will be countless more before we reach a viable solution, seeing as abolishing a dominant societal discourse is no simple task. It is important to acknowledge that while it is difficult to create a hierarchy of oppression, there are incredibly strong women who face abominable forms of objectification, far worse than disrobement; such forms of objectification are not issues I touch upon in this piece. That being said, microaggressions are still aggressions; photographing a woman’s breasts is demeaning, and groping a woman’s leg without consent is never acceptable. Until such acts are universally understood as corrupt, it is crucial we continue this dialogue.

Ryan, Leah. For Here or to Go: Life in the Service Industry. Garrett County Press, 2004.

*All “conversations” portrayed in the article are based off textual quotes but fictionalized in the context of the interview.