Footprints: Harouni’s Oasis of Mirrors, reflecting on the self in suburban communities 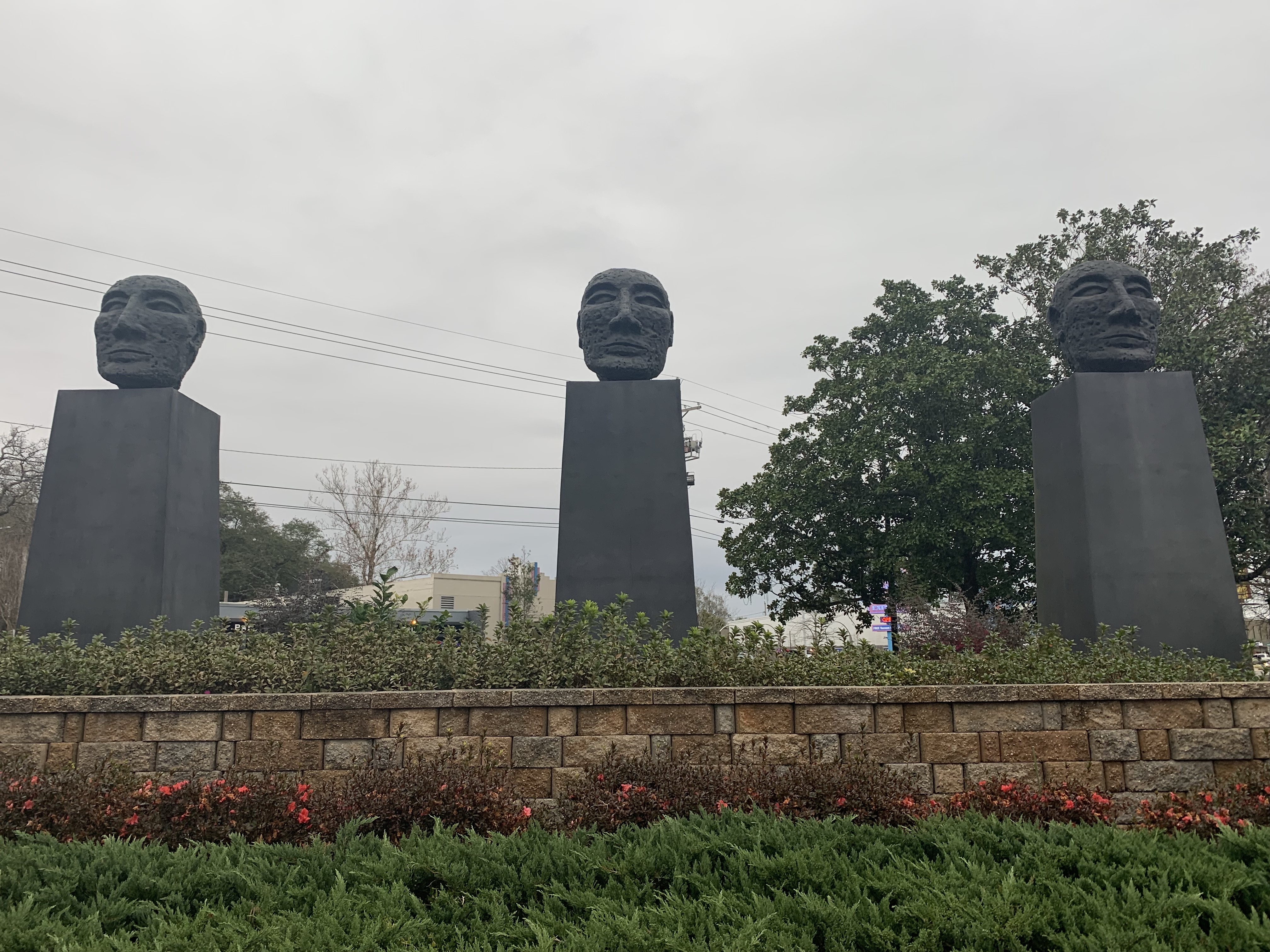 Off a main drag in the residential anyplace of Metairie, Louisiana, three gray floating heads stare at a Rally’s burger stand. I cannot describe the setting of this public art piece as truly on display, or in a park; no park would willingly incorporate disruptive blares of traffic noise, grotesque smells of fast-food grease, and the absence of seating as its key attractions. It is an aestheticized median strip. But as I approached the nameless sculpture series, the mystery of its omniscient aura began to unfold in front of me.

I swear I’d seen these figures before (though I’d never sat at the corner of Veterans Boulevard and Orion Avenue in my life). Primitive skulls slathered in rough, oxidized bronze for flesh. Each of the five-foot oracles sits precariously on 11-foot obelisks of buffed asphalt. The commercial, unblemished perches evoke a stark contrast to the figures themselves; muted lighting through the clouds reveals their idiosyncrasies. My eyes scan uneven cheekbones, jutting chins, and irregular contours of the individual heads. Their eyes are empty of pupils, and shadows dance among them to soften the contours of the faces. An innocuous brass placard to the rear reads “Harouni 2012.” They need no titles. They seem to breathe.

Nola.com refers to the figures as “Easter Island heads,” that “bring a mysterious vibe to Metairie” [1]. While I appreciate the attempt at analogy, it seems misplaced. The Easter Island heads are iconic, aching to see and be seen in return. In contrast, I futilely circled the bramble and shrubbery that surrounds Harouni’s statues to find no clear opening. A natural fence has been erected, sending a clear message of: Do Not Disturb, Keep Out. I felt the eyes judging and mocking me as I stumbled uncouthly through disheveled brush. Perhaps this is why no passerby wants to see them; the onlookers don’t want to see their own shame, or insecurity, or flaws on display. Yet, it seems that this is what the heads want most of all. For us to acknowledge their gaze, to suture the cracks we project onto their pockmarked surfaces.

David Harouni’s series of heads was commissioned in mid-2011 by the Jefferson Parish Streets department and put in place in January 2012. The piece joined a growing assortment of public art in the New Orleans-adjacent suburb, including works by local luminaries, such as George Rodrigue and James Michalopoulos[2]. Harouni is no lightweight in contrast. The artist was born in 1962 in Iran, immigrated to Israel during his early childhood, and ultimately to the United States during the 1978 Revolution. After attending high school in the United States, he faced problems with his visa and experienced personal traumas during a return to Khomaini-led Iran. Subsequently, Harouni gained re-entry into the US, spending brief stints in New York and Mexico before settling into a 25-year residency in New Orleans [3]. He describes his process of creating a piece as a “spontaneous evolution…I don’t calculate.” We can see his process of emotional creation on display, with chaotic chiseling in monochrome facial features. It looks like if Jackson Pollock threw a hammer against the walls of an abandoned warehouse.

Of Harouni’s second harrowing experience in Iran, he reports that “These emotions are reflected in the gaze of the subjects in my paintings. This gaze expresses my will to transform this horrifying experience into a source of strength.”And perhaps most pertinently, Harouni contemplates “What does one see in the multiple faces?…My response is that they are the reflections of whoever looks into them…”

What Harouni emphasizes in these excerpts seems to be the belief that art does not only empower humanity by merely capturing time and place. Rather, art emboldens us by preserving common aesthetics we share in being, and leaving the specifics blank. As Werner Herzog describes in Cave of Forgotten Dreams: “The main goal is to create stories about what could have happened…during the past. It is like you are creating the phone directory of Manhattan. Four million precise entries, but do they dream? Do they cry at night?…we’ll never know from the phone directory”[7]. To achieve Herzog’s challenge of capturing human stories has been the aim of journalism and art throughout time. From pamphlets to the printing press, we have tried to preserve the experience of living via research, archiving, and language. But if we apply journalism’s ethos (and Herzog’s goal) to Harouni’s work, we find that Harouni’s sculptures gain additional power through the ability to existentially speculate in a way that transcends limitations of words. Per Herzog, “[art is] a way of communication between humans and with the future to evocate the past, to transmit information that is very better than language…”[8]. By eliminating the linguistic limitations of words, Harouni makes the sharing of human experience universally accessible.

Further, from a psychoanalytic perspective, the uncanny nature of Harouni’s public art suggests a purpose of spontaneous, constructive disruption. Per Sigmund Freud, the uncanny is the discomfort that arises from having the secret and unattractive (or heimlich) parts of one’s life being made public (or unheimlich)—a forced reminder of one’s repressed impulses (id). Yet, through this public discomposure, one becomes increasingly conscious of its being in the world, and can address these distressful events to live a healthier life [9]. In “The Return of Negation: The Doppelganger in Freud’s ‘The Uncanny,’” Dimitris Vardoulakis explores the uncanny experience of the doppelganger. The doppelganger (or fantastical double of a living person), Vardoulakis notes, is traditionally seen in fiction “as a notion of the subject/subjectivity that is defective, disjunct, split, threatening…”[10]. Harouni’s heads serve as doppelgangers of the observers — gazing out as anonymous speculators on the scene before them. If read this way, Harouni’s doppelganger artwork becomes a disconnected lament of the human gaze; we are all absolutely flawed, and we all must change. Turn away from the simulacra, the pleasures of the pearly retail complexes that enclose the landscape. Turn toward the surrounding blights, the systematized racism, the ugly truth.

Yet, as Vardoulakis asserts, this reading of the doppelganger is close-minded. He claims that “the Doppelganger retains the potential to be articulated in positive terms. But this can only come to light by questioning the unproblematic equating of content – either as the plot of the story, or as the history of a self – with a stable and retrievable origin…”[11]. In other words, the doppelganger is only problematic when we view flaws as unchanging inevitabilities, rather than projects. And rather, when viewed as projects, the doppelganger serves as a method of psychological interruption upon them. We are enabled to consider our traits, reflect on their desirability, and act critically. Harouni has merely adjusted his perception to find meaning in pain; he chose to turn the  trauma of Iran into the celebration of his perseverance and new life. As Vardoulakis notes, “The starting point of the comparison between self and the doppelganger is the nothing. The possibility of negation is linked to the possibility of meaning…Meaning becomes a function of the negotiation between those regions”[12]. Harouni has invited us to find meaning in negotiating self-healing, without outside motivation. The process gives us purpose in the face of futility.

Harouni’s celebration of the doppelganger in his sculpture thus conveys that through striving for improvement, with the base of past human experience and through pain, we will rediscover meaning in the process of living. The art piece serves as a public resource for anonymous salvation and reconciliation; it conveys Harouni’s artistic vision, while achieving the goals of Herzog and greater journalism.

Whether Harouni’s art piece is successful or not in its goal of inspiring self-knowledge, improvement, and reflection remains to be seen. But I can assert that taking twenty minutes to weave through soccer mom vans, consumerist detritus, and mangled bushes is the closest I have come to free therapy.

Footprints: Mirror, mirror on the street, a closer look at Ourglass
Art