Footrprints: A plea for public art through the National Art and Hobby store

There’s a building on Magazine Street that I could easily convince somebody is haunted. Sure, that somebody would have to be familiar with 1980s sci-fi films and probably under the age of 10. But with a convincing enough backstory for the Ghostbusters logo stenciled on the wall, I’m sure it could be done.

And, really, this wouldn’t be too far from the truth. There are ghosts at 5835 Magazine Street, just not ones of a busting variety. Rather, they’re the memories of National Art & Hobby, a now-closed crafts store whose story is told around the corner from the Ghostbusters logo, nestled in a mural of geometric shapes and a kaleidoscope of butterflies flocking toward the sky.1 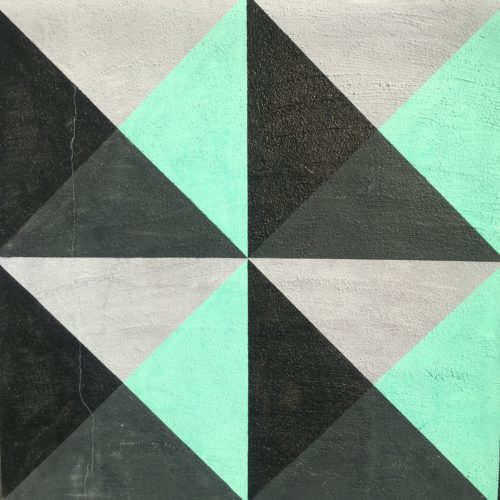 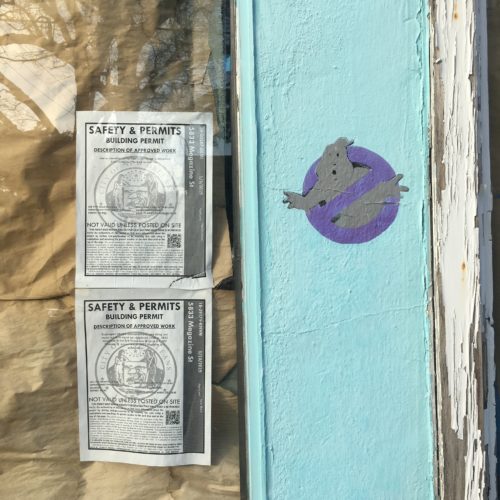 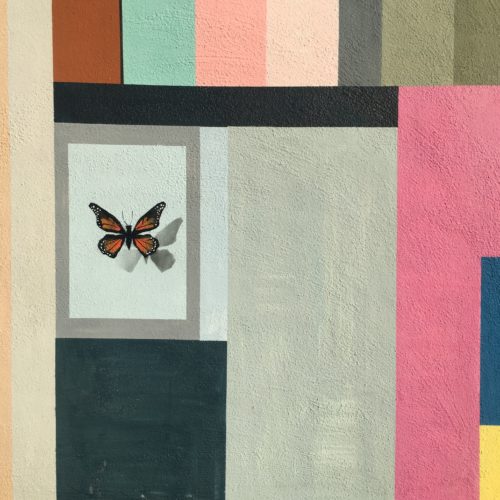 The mural’s segments aren’t too revealing. Tourists or transplants unfamiliar with National Art & Hobby’s 86-year-run would be hard-pressed to connect details of the store’s history to details of its painted wall. The pastel, spring-time stripes that stack up from the sidewalk don’t obviously refer to the paint cans of similar shades that once lined shelves inside. The orange and grey border that spirals across the mural like a Roman frieze can’t say the store once attracted empires of professional and amateur artists alike. The shadowy triangles which bifurcate spears of sea-blue in a dominating block can’t express how after Hurricane Katrina, when other businesses along Magazine were dark, National Art & Hobby was open, acting as the neighborhood meeting place it always had been.

Even the mural’s more intentional aspects are impossible to decipher when separated from the store they once decorated. Butterflies, a motif dotting the wall, find themselves both boxed like dainty collectors’ items and also bursting from the mural’s center. They even flutter up beyond the painting proper, across the building’s siding and into the sky.

The Butterflies are an homage to Marge Ward, a local sculptor, and member of National Art & Hobby’s long-time owning family. Before she passed away in 2013, Ward would craft detailed butterfly pins for relatives, friends, and customers—a creative tradition now perpetuated through the mural. Every person whose gaze lingers on the butterflies of the wall now also receives a gift inspired by Ward, whether they realize it or not. 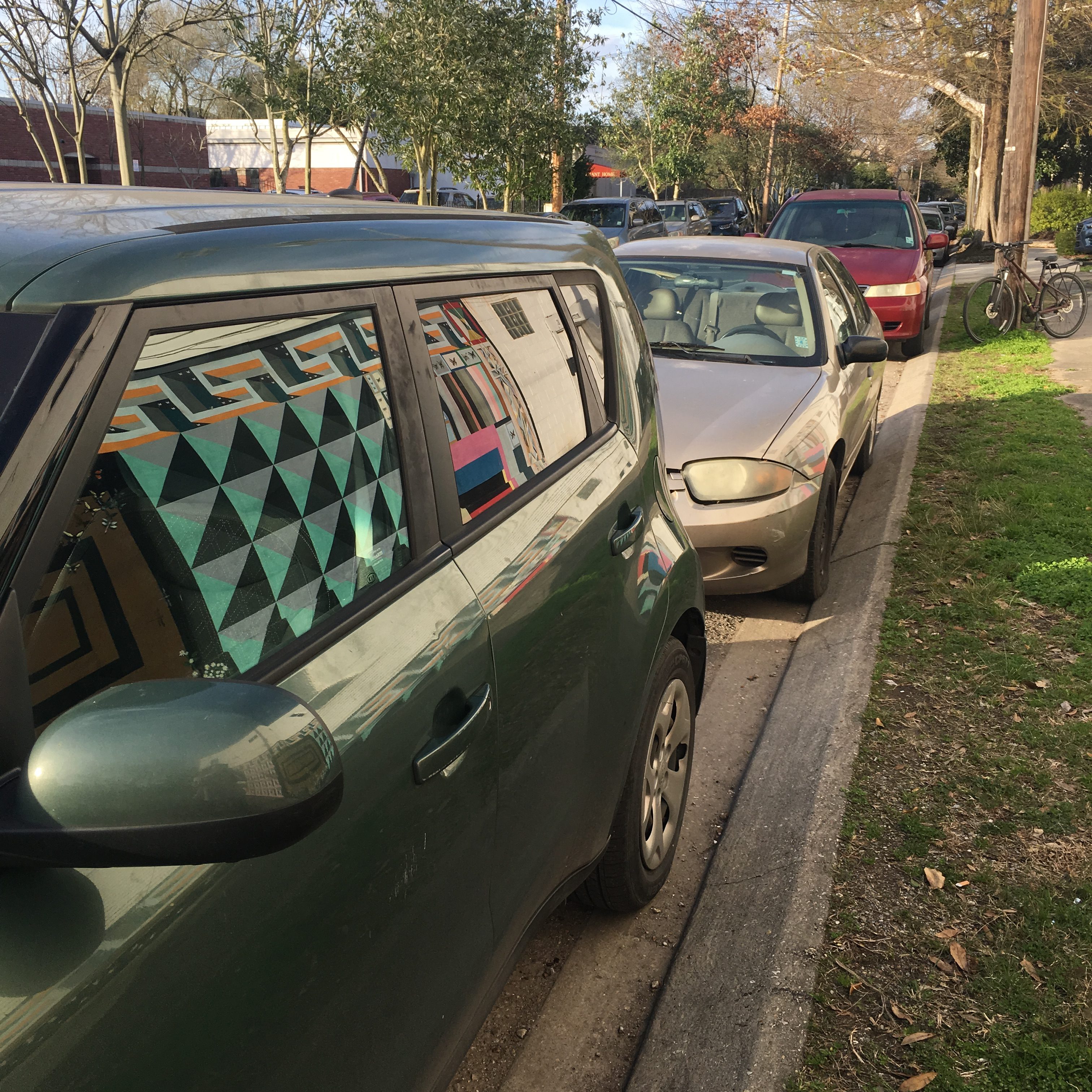 The requirement of realization, of direct connection with stories the mural represents, is, in the end, inconsequential to the piece’s artistic purpose. Art, especially, public art, is meant to be a Socratic seminar, not a lecture.

Knowing Ward’s story, or even knowing the story of National Art & Hobby, is not a pre-requisite for connecting with the aura of the mural. It takes a lot of creative energy for passersby to see their friend’s eyes, childhood backyard, or favorite poem in a specific pattern on the wall. These personal connections shouldn’t be discounted.

It’s certainly interesting to understand the context under which a piece of art is created, but it’s not essential. My  first reaction to the mural was that the panels of earthen-toned triangles ,which bookend the piece, look like patterns from Gotye’s 2011 hit music video for the song “Somebody that I used to Know.” This is definitely not the most nuanced of responses, but still constitutes a sort of creative connection.

It matters less what we think when we reflect on public art, and more that there was art present to make us think at all. The way in which we interact with public spaces have real consequences for how we view the people and the institutions that inhabit them; exhibitions like the National Art & Hobby mural are one way in which this collective contemplation can be made positive. 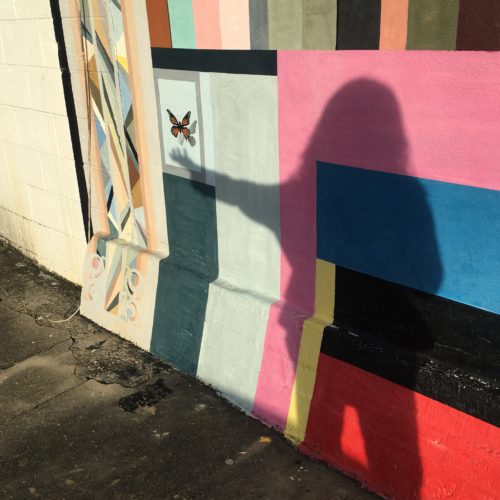 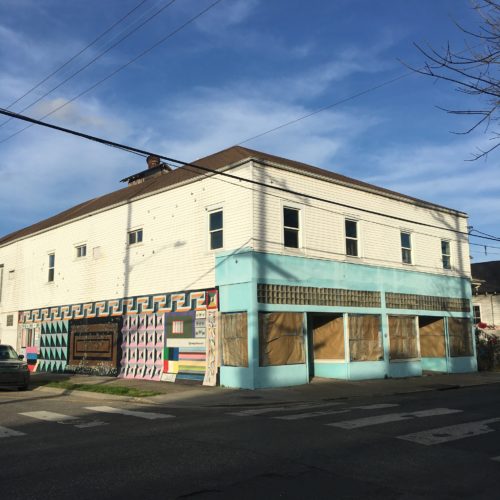 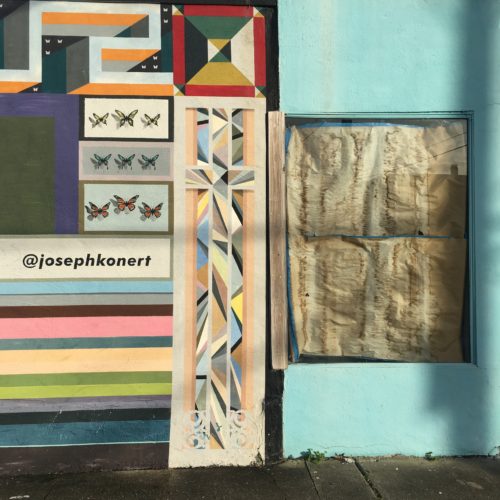 The way in which passersby postulate about art is perhaps not urban geography’s most pressing issue—that title should probably go to more politically or economically salient topics.

For instance, it has been found that harsh media portrayals of urban areas can inaccurately label them as “unsafe zones” of deviance. Or, when too much emphasis is placed on the benefits of new businesses and industry, harmful aspects of those same firms’ labor practices are more likely to be overlooked. These policy-oriented probes seem much more urgent than my linking a mural to a largely forgotten pop song —I’ll concede that point. But, like the varying character of the National Art & Hobby mural, these cases prove that how the world operates is directly related to the way in which we personally perceive it.

Everything has a malleable identity. Within spheres of urban geography, this malleability has been taken to mean that “there cannot be a single, unitary meaning of a given place, neighborhood, or city.”2 The public art meant to reflect such places, then, should never be constrained by notions of when, why, or for whom it was created.

I say all this as a sort of plea to whoever may occupy National Art & Hobby’s building next. Whether you’re a restaurant, office, or a new local business, please consider keeping the mural when you move in.  Allow long-time neighbors to reminisce about the past, and let new friends reflect on the butterflies, the stripes, and undulating geometric patterns however they see fit.

In a city like New Orleans, a place so dedicated to preservation and so familiar with loss, I hope my appeal will resonate with you. After all, the mural, if you decide to keep it, will take on elements of your story and your mission, too. And when the light hits your west-facing wall just right, you’ll still be able to reach out and grab one of Marge Ward’s delicate little pins. I hope you’ll wear it proudly.

The National Art & Hobby mural was created by @josephkonnert and resides at the intersection of Magazine and Eleonore streets. While the store it originally represented is no longer in business, the mural carries on its creative legacy by catching the gaze of every passerby.

I’d love to see a new mural competition every few years at what was a wonderful store when this beautiful one gets washed out.

Footprints: Harouni’s Oasis of Mirrors, reflecting on the self in suburban communities
Art

Footprints: Color among concrete: Travis “Trumpet Black” Hill
Art
We use cookies to ensure that we give you the best experience on our website. If you continue to use this site we will assume that you are happy with it.Ok