It’s the symptom, not the cause (part IV): Brad Pitt and The Make it Right Foundation 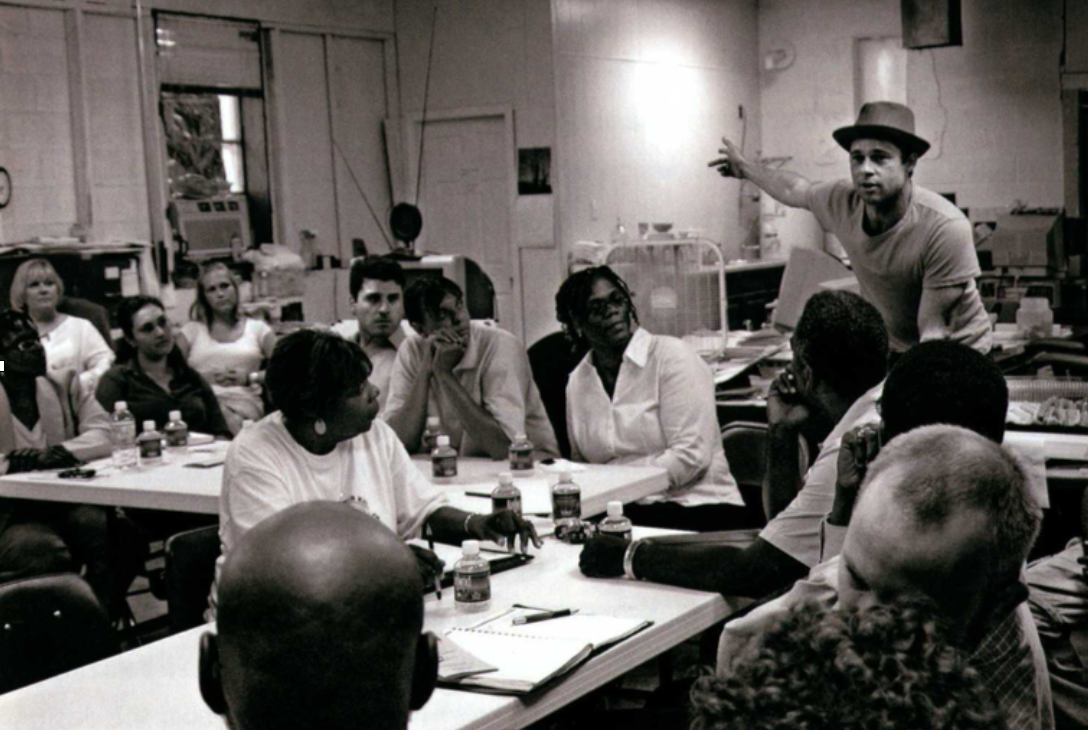 The book Brad Pitt and the MIR team put together in 2009, Architecture in Times of Need: Make It Right Rebuilding New Orleans’ Lower Ninth Ward, is 488 glossy pages of design plans, testimonials, and charts, a blueprint for those looking to follow in MIR’s footsteps. If the tome’s timelines and financial breakdowns aren’t enough for such entrepreneurs, instruction is provided in photographed form.

Several photos toward the end of the Architecture in Times of Need show Brad Pitt nestled among crowds made up mostly of people of color, sitting around flimsy fold out tables in a mostly windowless room, maybe a church basement, lined with filing cabinets. In one photo, Pitt, listening intently, leans towards a man while others engage in lively conversation around them. In another, Pitt is the only person in the room not seated; he points off into the distance as everyone looks at him as if he’s a teacher heading a classroom.

The tone of MIR’s strategy mirrored those moments captured in this room. Despite the international team of architects and the fact that part of Pitt’s aim with MIR was to create “a template [for low-income, sustainable houses] that could be replicated at the macro level,” MIR’s approach was meant to feel grassroots and community-centered, like they were indeed gathering in a church basement about community issues, and the millionaire movie star leading the meeting just happened to be there. Surely influenced by the hesitation of residents who had encountered more than their fair share of random NGOs swarming the city after Katrina and were suspicious of possible PR motives by celebrities (“Were they really going to stick around?” a resident asked), MIR held town halls and community meetings, and even had everyone involved sign a memorandum of understanding after an initial plan was agreed upon. Writings in Architecture in Times of Need, from community members and activists, MIR affiliates, and Pitt himself, convey the awareness that since the people of the Lower Ninth Ward were always central to the project, their direct involvement was essential. In this way at least, MIR was markedly different from disaster capitalists and neoliberal shock doctors, who preferred to do their dirty work out of sight—in hotel conference rooms in Dallas, say—in shock-soaked moments.

Pitt’s celebrity and clever PR maneuvering helped fund what MIR needed in order to, as he put it, “answer all the problems” of building good houses in the Lower Ninth: green tech, sustainable building materials, and the implementation of designs by a team of famous international architects. Along with the $5 million he donated, Pitt brought in substantial donations from big names like the Clinton’s CGI, the progressive philanthropist Steve Bing, the American Idol television show, and Ellen Degeneres. MIR also collected donations from non-famous individual donors, citizens across the globe who wanted to support his efforts in the Lower Ninth. The phrase “crowdfunding” wasn’t commonplace in 2008 like it is now, but the concept was part of the MIR’s aim to create a community distanced from politics, fueled only by Americans’ care for other Americans. “Make It Right was built on the donations of people,” Pitt said in an interview in 2010. “Americans donated. That has a deep effect on the people living in these homes. We have solar panels providing the energy, and it works and fellow Americans paid for it. Not the government.” (It’s worth noting here that in general, the building of environmentally-conscious, cost-effective, well-designed homes with the latest green technology is much more expensive than conventional construction methods; another organization built 1,800 apartments and houses at one-third MIR’s per-unit cost by 2013, and an official at another said they could run their organization for 170 years with $40 million, which is just $5 million less than the amount MIR had collected at the time.)

MIR’s strategy, with it’s open town halls, community agreements, and crowdfunding, was pointedly different from that of the various think-tanks, pundits, and planners who descended upon the topic of what to do with post-Katrina New Orleans like magpies at the sight of a new quarter. What the bigwigs from D.C. and midwesterner-at-heart Pitt, had in common, though, was their ability to spot an opportunity: for Pitt, it was a chance to “make it right” for New Orleans after a lapse of lousy governance; for others, it was to overhaul the entire system.

None other than Milton Friedman appeared after Katrina, seemingly apropos of nothing aside from his ability to smell a shock from hundreds of miles away. In a commentary piece for the Wall Street Journal called “The Promise of Vouchers,” the former policy advisor to Ronald Reagan and Margaret Thatcher took full advantage of the chance to dial in an argument for the privatization of schools into a charter system. “Most New Orleans schools are in ruins, as are the homes of the children who have attended them,” Milton Friedman wrote less than four months after the storm. “The children are now scattered all over the country. This is a tragedy. It is also an opportunity to radically reform the educational system.”

Compare Friedman’s words to those of Brad Pitt, who said in a 2010 interview: “The Lower Ninth had become a clean slate. Everything had been washed away. […] I said let’s start at ground zero, the very historic neighborhood that got devastated by Katrina.” “Clean slates,” “opportunities”—whatever it’s called, the idea of possibility in the face of immense devastation is, as Klein writes, a trademark of disaster capitalism.

Also like the disaster capitalists’ money-grabbing in the name of “reform” after the storm, MIR was successful, at least at first. Houses were built, residents were thankful, people made “Brad Pitt For Mayor” t-shirts. Pitt continued to ride his bike around the Lower Ninth, asking people how much they were saving on their utility bills. Profiles ran with titles like “Brad the Builder” and “Saint Brad” while Secretary of State Hillary Clinton made a public statement about how Make It Right was making up for the continual failures of the Bush administration. The problem, though, was that all the donated money funding MIR was money the government didn’t have to spend. As Cedric Johnson notes in the The Neoliberal Deluge, Pitt and MIR, with their hyper-focus on community responsibility, had “stopped short of making a clarion call for public action” (217), easing the transformation of the rehabilitation of the Lower Ninth Ward from a public issue to be resolved with public services into a private one to be resolved with private services. As the project went on, a distance grew between Pitt’s vision of the Lower Ninth as a “microcosm of all the world’s problems” and the chance that attention to those problems could spur concrete change. In the end, he chose architecture over demolished regulations, solar panels over social services, the will of one to “make it right” for the marginalized over the responsibility of the public’s leaders—Republicans and Democrats—who owed it to them. Whether or not he realized it, Brad Pitt had let the government off the hook.

Part 5 of “It’s the symptom, not the cause, Brad” will be published on ViaNolaVie on Monday, February 25.

Author’s Note: As I mentioned in my note at the beginning of this article, I did not do any on-the-ground reporting for this story. Being in school in Massachusetts, I relied on 35 pieces of writing–from national and local magazines, websites, and books–for quotes, descriptions, and the other details necessary to create a piece of longform journalism. I am grateful to the reporters, writers, and academics whose work was vital to make this piece what I wanted it to be. The links embedded throughout my piece should serve as in-text citations for their work, and a full bibliographic entry (with page numbers, as necessary) of each source is listed below.

DePillis, Lydia. “If You Rebuild It, They May Not Come,” The New Republic, March 13, 2013, https://newrepublic.com/article/112620/brad-pitts-make-it-right-houses-drag-new-orleans.

It’s the symptom, not the cause (Part II): Brad Pitt and the Make it Right Foundation
Neighborhoods