It’s the symptom, not the cause (Part II): Brad Pitt and the Make it Right Foundation

To read part I of “It’s the symptom, not the cause,” click here. 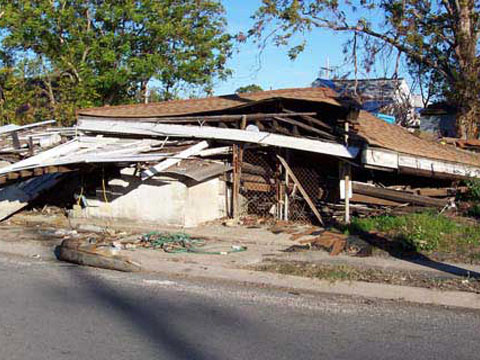 The essayist Nancy Gibbs once called New Orleans “a sand castle set on a sponge nine feet below sea level.” The comparison is apt; the city was founded on swamp and marsh and never exactly ideal for human habitation. Not surprisingly, throughout the three centuries of the city, shifting topographies have forced residents to migrate to and from different areas depending on sea levels and rates of flooding, a trend that is destined to continue with the acceleration of climate change. As mentioned, often these patterns fall along racial and economic lines, with the wealthy living on high ground and lower-income residents inhabiting the areas that, to use the city’s parlance, “hold water.” Certain building and design methods, made to fend off the ruinous effect of the region’s tropical climate, have also become custom in the area: roofs are slanted to shed accumulated water, and certain materials are preferred over others for their ability to withstand long periods of heat and dampness.

If you wanted to see what would happen if you did not build correctly for the severe, sauna-like conditions of New Orleans, you wouldn’t have to look further than the Lower Ninth Ward, where, after ongoing complaints from neighbors, a crumbling structure, at that point more mold than house, was demolished on June 30 of 2018. 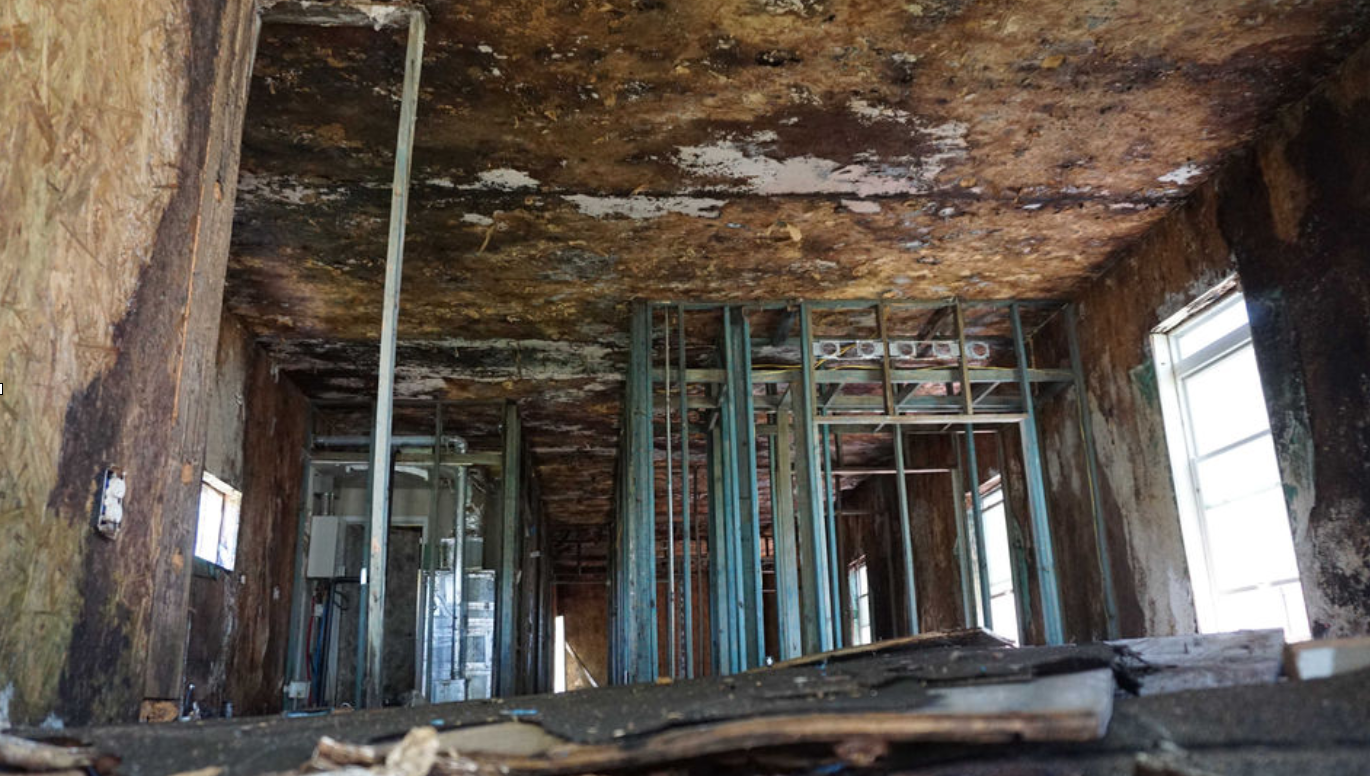 5012 Derbigny Street in the Lower Ninth Ward. Photo by Doug MacCash for NOLA.com | The Times-Picayune.

A photo of the interior of 5012 North Derbigny Street looks less like the inside of a house and more like the remains of a long-forgotten shipwreck. The little light that comes through the windows hits dully against sodden walls that appear to be made of plyboard and nothing else. A mix of rust and rot covers the ceiling, which looks to be held up only by some ancient-looking poles that are a shade of blue reminiscent of antique china, a variety that wouldn’t have looked out of place on the Titanic. As with the ghostly remains of the famous ship, too, is the sense that any people who occupied this space have long since left.

But it wasn’t just the climate that sank 5012 North Derbigny. Though the details have yet to be released, swaths of evidence suggest that Brad Pitt and MIR let the designing and building methods necessary to accommodate living on New Orleans swampland fall to the wayside somewhere along the way of building sustainable, affordable homes for the city’s residents. Nothing else could account for the mess of North Derbigny. Perhaps MIR used materials that were environmentally-safe, but practically flimsy. Maybe the results of sustainable design and green tech weren’t a match for the intense climate, or there were concerns about finances or sustainable viability, or architects and contractors lacked enough local knowledge to make sound, effective choices. Regardless of the reason why, the result is tragic: before and after the demolition of 5012 North Derbigny, a number of residents have been forced to move out of their MIR homes when issues like weather damage and shoddy construction made it impossible to stay. One woman had leave after mysteriously falling ill; it turned out that the air inside her home had elevated levels of a fungus associated with rotting mold, which is caused by large amounts of moisture. She said she asked MIR for help remedying these issues multiple times with no response. Others faced leaks in their walls, which then started to decompose. Despite safety concerns, some residents remain in their homes and try to live with disintegrating front steps, bowed roofs, and sagging foundations—they’re forced to pay their mortgage and can’t afford to move again.

Largely MIA, Make It Right has either not returned phone calls or fixed things only intermittently. Putting aside the reason why the disintegration of the houses happened, it appears that MIR also forgot who they built houses for—a group of people neglected and abandoned by their government in a time of crisis. Now MIR, whose mission was to make up for the cruelties of a neoliberal-minded politicians, were pouring salt on the wound.

While the citizens of the Ninth Ward are grateful to Brad Pitt they were forced to file this lawsuit because the Make It Right Foundation built substandard homes that are deteriorating at a rapid pace while the homeowners are stuck with mortgages on properties that have diminished values. We have filed to make Make It Right make it right.

Another lawsuit was filed not long after, by MIR against John C. Williams, the New Orleans-based architect who oversaw MIR construction and repairs in the Lower Ninth. Both cases have yet to go to court, and documents continue to be filed at the time of this writing. Recently, Brad Pitt requested for his name to be removed from court documents related to the case. In a statement after the filing against MIR, Pitt spoke publicly about the organization for the first time since the ten-year anniversary of Katrina in 2015: “I made a promise to the folks of the Lower Ninth to help them rebuild — it is a promise I intend to keep,” he said.

How could this happen? How could the progressive project that Hillary Clinton said was “doing its part […] while the Bush administration continues to fail,” also fail? That the situation is a tragedy—a blatant injustice on top of another injustice, a wrong covering up another wrong—is, sadly, obvious. The easiest reasoning is that Brad Pitt is a big-minded, naive celebrity who thought he could ignore feedback and produce a miracle out of good intentions, fancy connections, and charm. But that’s just the story most quickly at hand. What lies underneath this simple narrative is something else.

In her book about the aftermath of the November 2016 election, The Marginalized Majority: Claiming Our Power in a Post-Truth America (2018), Onnesha Roychoudhuri writes that every historical event is followed by an “event horizon”- a limited span of time in which information can be taken in, understood, and responded to. Without action during this time frame, the momentum surrounding the event sweeps away the chance for holistic understanding of the moment’s historical implications and its impacts on society.

The habit of the media, politicians, and people in power—liberals and conservatives—to use overplayed, stale narratives to explain the torrent of events arriving in our email, on our newsfeeds, and as news alerts on our phones, explains Roychoudhuri, has made the event horizon even shorter. It’s also helped to set the polarizing tone of our current political moment. But this polarization is strongest not between us, the people, but the people, and those in power who are supposed to lead us.

The same can be said about MIR’s strategy and the narratives we have on hand to understand the situation. Indeed, one journalist at The New Republic asked not what it meant for disaster victims to have to rely on celebrities, not political leaders, to return home, but whether those victims deserved the infrastructure finally thrown at them years later (in large part due to the influence of Brad Pitt and MIR) over other areas that “had a better chance of full recovery.” For that writer, the story fell along familiar lines, of the poor judgement of New Orleans city officials and a stereotyped depiction of poor people as depraved and undeserving, instead of an interrogation of why and how Brad Pitt was the person determining who got water, electricity, and sewage in the first place.

Brad Pitt once called post-Katrina New Orleans “a microcosm of many of the world’s problems: the marginalization of a people, the malpractice of providing low-quality housing for low-income people, even the victimization of oil greed.” What other narratives do we have to understand the failure of his progressive, liberal solution, before the horizon disappears?

Part 3 of “It’s the symptom, not the cause, Brad” will be published on ViaNolaVie on Monday, February 11.

A note about sources: As I mentioned in the author’s note at the beginning of this article, I did not do any on-the-ground reporting for this story. Being in school in Massachusetts, I relied on 35 pieces of writing–from national and local magazines, websites, and books–for quotes, descriptions, and the other details necessary to create a piece of longform journalism. I am grateful to the reporters, writers, and academics whose work was vital to make this piece what I wanted it to be. The links embedded throughout my piece should serve as in-text citations for their work, and a full bibliographic entry (with page numbers, as necessary) of each source is listed below.

DePillis, Lydia. “If You Rebuild It, They May Not Come,” The New Republic, March 13, 2013, https://newrepublic.com/article/112620/brad-pitts-make-it-right-houses-drag-new-orleans.