It’s the symptom, not the cause (Part III): Brad Pitt and the Make it Right Foundation

Make It Right, like so many other private organizations and community and church groups, is doing its part to move the Gulf Coast further on the path of recovery. But while the American people continue to step up, the Bush Administration continues to fail. 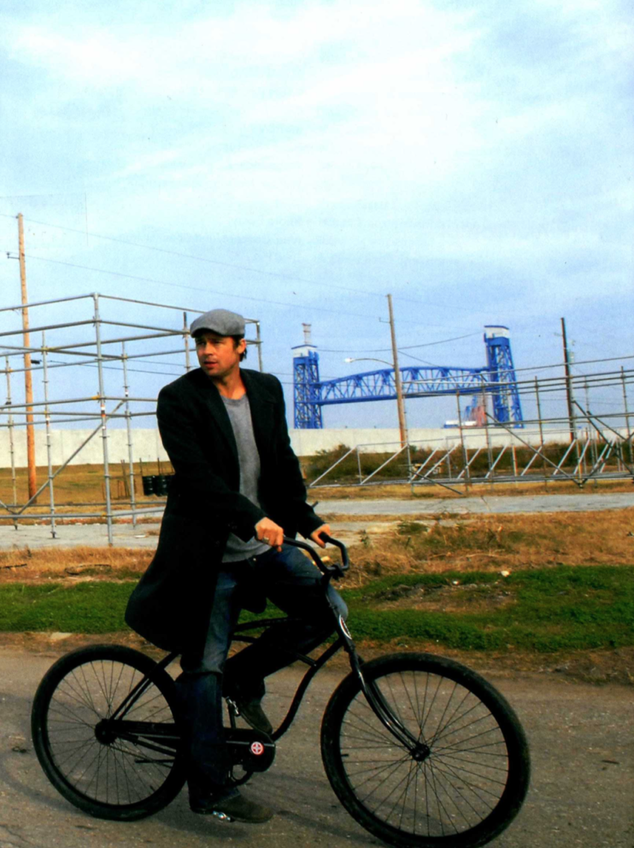 A particular image is peppered throughout the literature about MIR—in profiles in Architectural Digest, commentary in The Guardian, and in the organization’s own book, Architecture in Times of Need: Make It Right Rebuilding New Orleans’ Lower Ninth Ward. It is an image of an unsmiling, thoughtful Brad Pitt, alone, in the Lower Ninth Ward. On his bike in front of some scaffolding, sitting on some steps strangely unattached to a building, or walking down a gravel road amidst a series of storm-battered houses on the brink of collapse, it seems that the goal of each photographer was to capture Pitt’s singular contemplative presence in the face of desolation.

In a 2010 interview, Pitt described the moral outrage that fueled his mission to “make things fair for the people of New Orleans”: “Nobody was doing what I thought to be done,” he said. “What was the message? We were telling people to come home and yet when they got to New Orleans they were treated in a substandard way. I just thought it was atrocious.”

But Pitt wasn’t hesitant to note  his motives with MIR that spanned beyond mere goodwill, either. A self-described “architecture junkie,” Pitt saw rebuilding the Lower Ninth as an opportunity to create something that had never been done. “The holy grail of architecture is finding ways to design sustainable communities,” he said in the interview.

I was also an opportunist. I saw this land, it was available, and I thought we could make a difference. Starting from scratch has its benefits. Too often we give disaster victims cheap building products, slipshod materials, and then put on top of them the burden of energy bills and medical bills. You know it’s the badly built levees that destroyed these people’s lives. We needed, as a country, to do something right for them. A new paradigm was needed. The technology was available. So I thought, ‘Let’s build houses that answer all the problems.’

(A similar experimental tone was taken up a MIR contractor who saw his work with the organization, though donated, as a “reputation builder,” and, too, a lawyer at the New Orleans Redevelopment Authority, who called MIR a “massive R&D project.”)

Almost from the beginning, the cache of People magazine’s two-time Sexiest Man Alive winner cast a depoliticizing veneer onto his organization. Distracted by photos of Pitt riding his bike around the Lower Ninth Ward with his children, the media’s coverage gradually worked to strip MIR of any partisan leanings, and therefore any partisan critique. The public’s attention shifted from the political implications of Pitt’s interference in the Lower Ninth to the celebrity’s simple, a-political mission to build houses for people who need them.

The series of decisions and actions that made Pitt’s intervention necessary, however, reveals how political his organization really is. Even after the massive failures of evacuation and search-and-rescue during the storm (not to mention the fact that the levees broke in the first place), local, state, and federal authorities weren’t shy about using recovery to favor a select few while completely ignoring others. Rather, they were brazen. Borne out of these blatant injustices, MIR was less about righting nature’s wrongs, than man’s.

In The Shock Doctrine (2007), Naomi Klein describes the Dallas meeting of Republican lawmakers and business people put together by the Heritage Foundation, a conservative think tank, fourteen days after Katrina. One item of “hurricane relief” the group created was a list titled “Pro-Free-Market Ideas for Responding to Hurricane Katrina and High Gas Prices.” At the top of this list was suspending a law that ensured a living wage for employees of federal contractors and making “the entire area an economic competitiveness zone (comprehensive tax initiatives and waiving of regulations).” These key players in Dallas were gathered to make some money via shifts in the public sphere; a primary example of what Klein calls “disaster capitalism.”

Post-Katrina New Orleans is also exemplary of Klein’s shock doctrine theory, which is drawn from the philosophy of Milton Friedman, the godfather of the Chicago School of Economics. Essentially, the shock doctrine comes down to the rapid restructuring of social and economic systems immediately following a massive, traumatic event, like a natural disaster or a terrorist attack. “Only a crisis—actual or perceived—produces real change,” Friedman wrote. “When that crisis occurs, the actions that are taken depend on the ideas that are lying around.”

In other words, if presented with a time in which a society and environment is in such a paralyzing state of shock—a blank map, if you will—be standing by with the policies and partnerships of your dreams, ready to rebuild from the ground up using ideas that would never make it past Congress, or City Council, or the Better Business Bureau, in normal circumstances. And do it before people notice.

In New Orleans, disaster capitalists literally made a map. In 2006, the same group that made the pro-free-market list in Dallas, by then dubbed the “Bring New Orleans Back Commission,” proposed a now infamous map designed by the Urban Land Institute (ULI) to “shrink the city’s footprint.” (ULI was at one time chaired by Joseph Canizaro, a wealthy New Orleans developer who was, conveniently, a member of the Bring New Orleans Back Commission.) On the map, the Lower Ninth and several other neighborhoods were covered with green dots, which marked those areas a future “green spaces” where development would be banned. Needless to say, the map was met with immediate uproar and quickly disappeared.

Other clues about who was really welcomed back home after the storm—victims of Katrina and the shock doctrine both—weren’t hard to find. Thousands lost their jobs as Nagin and Blanco gutted the public municipal and educational systems, a bitter break in an already impoverished city. Without financial support, thousands were stranded in cities across the country; many of them gave up on the bureaucracy and stayed where there were more job prospects and better public benefits. In 2008, federal and state government was sued by housing activists for discrimination in Road Home, a federally-funded program designed to financially support residents who needed help rebuilding (the Obama administration settled in 2011).

But it’s not as if New Orleanians simply rolled over and took being kicked out of their city. Residents were resisting the government’s poor treatment way before Brad Pitt arrived in 2008. In a place where, as Rebecca Solnit notes in A Paradise Built in Hell, community aid is as much as a tradition as gumbo and Mardi Gras, it didn’t take long for residents to create means of support for themselves and each other. Arising out of the storm was Common Ground, a mutual aid organization in the Lower Ninth Ward that provided various resources, like a medic and a tool-lending station, in addition to relief efforts in the neighborhood. The Holy Cross Neighborhood Association (HCNA), which also advocates for the Lower Ninth, was established before Katrina but took on a key organizing role in the aftermath of the storm, often focusing on environmental factors that had endangered the neighborhood for decades. Other groups like benevolent societies and church organizations—from New Orleans and across the country—raised money, rebuilt houses, and tried to provide for Katrina victims the support they were denied from their government. But, as Solnit also wrote in her book, “the scale of the devastation and loss [from Katrina] meant that mutual aid wasn’t enough.”

Other kinds of aid weren’t enough, either. So extensive was the wreckage that it soon became clear that the larger national nonprofits who stepped in after the storm also had limits. The Red Cross provides support immediately after crises, but no longer than that (and was later criticized for its startling lack of preparedness for Katrina efforts), and Habitat for Humanity could only work so fast and do so much, given the fact that their crews were made up largely of volunteers, not professional builders. There’s also the sheer quantity of houses that were destroyed or severely damaged in the storm: 350,000.

Would anyone else have stepped in so grandly and determinedly for the people of the Lower Ninth Ward if Brad Pitt hadn’t taken up “making it right” as his own personal mission? Possibly. More likely to have happened, though, is that residents who wanted to return home to reclaim some part of their lives would have had to continue to deal with an uncaring government that wasn’t acting as if they were a priority. After years of struggle, waiting, and frustration, the arrival of Brad Pitt, movie star, with his earnest charm and optimistic ideas, must have felt to people from the Lower Ninth Ward like a gift from god. But what he actually did, whether he realizes it or not, was a little like what Blanco did when she gutted the public school system right after the storm. At the core of MIR’s mission to do what the government hadn’t was the beating heart of neoliberalism: private enterprise over public resources.

Part 4 of “It’s the symptom, not the cause, Brad” will be published on ViaNolaVie on Monday, February 18.

A note about sources: As I mentioned in the author’s note at the beginning of this article, I did not do any on-the-ground reporting for this story. Being in school in Massachusetts, I relied on 35 pieces of writing–from national and local magazines, websites, and books–for quotes, descriptions, and the other details necessary to create a piece of longform journalism. I am grateful to the reporters, writers, and academics whose work was vital to make this piece what I wanted it to be. The links embedded throughout my piece should serve as in-text citations for their work, and a full bibliographic entry (with page numbers, as necessary) of each source is listed below.

Brinkley, Douglas and the Times-Picayune. “Brad Pitt talks about Hurricane Katrina, his Make It Right work and his love for New Orleans,” NOLA.com | The Times-Picayune, August 25, 2010, https://www.nola.com/katrina/index.ssf/2010/08/brad_pitt_talks_about_hurrican.html.

Rivlin, Gary. “Why the Lower Ninth Ward Looks like the Hurricane Just Hit,” The Nation, August 13, 2015.

It’s the symptom, not the cause (Part II): Brad Pitt and the Make it Right Foundation
Neighborhoods