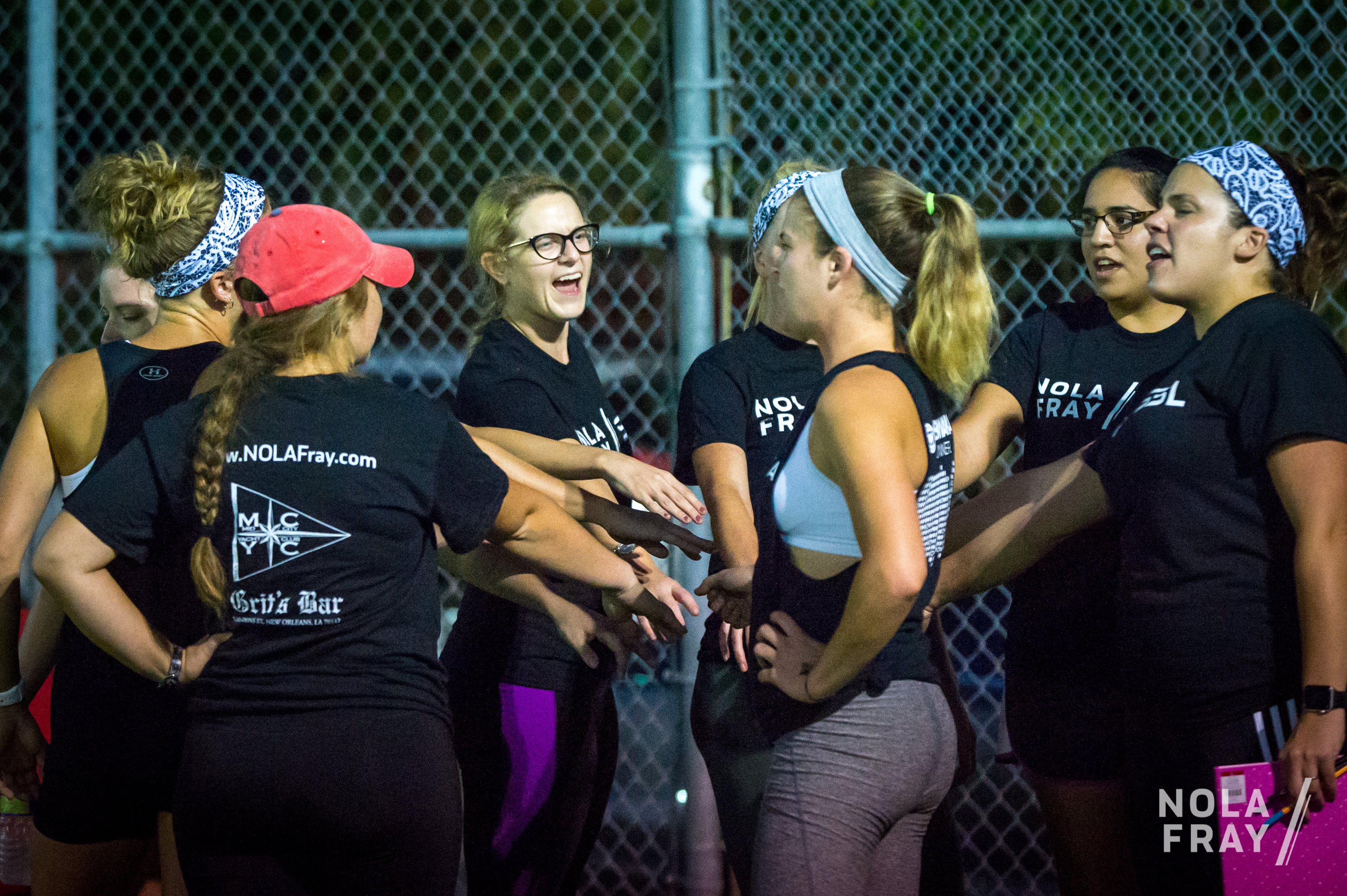 Girls softball getting ready to take the field. (Photos courtesy of: Nola Fray)

My mom once told me, “Every squirrel that didn’t have a tree ended up in New Orleans.” She says this lovingly, having lived in the city in the 70s and continuing to miss it every day she’s not here. Although I’m her daughter (and a lover of all things rodent and wind-swaying) when I moved to New Orleans, I had a different take. This was the place where a person could be an adult without ever sacrificing their inner child. Case and point, Nola Fray, who will be launching their full activities calendar this year and are kicking off their season with a .5 K run that they’ve entitled, “The Ultimate Underachievers “Run.”

Started in Washington DC in 2009, Fray’s mission falls into phrases like, “make fun possible” and “never stop playing.” They make it their goal to “find the inner child and playfulness in every adult,” says Ilana Obuchowski, the New Orleans City Commissioner for Nola Fray. With their 2019 season now solidified, NOLA Fray will offer softball (Mid-City Yacht Club), kickball (City Park and Wisner Playground) and cornhole (Tchoup Yard) leagues for young professionals to be active and social while having fun.

Although Nola Fray is new to New Orleans this year, there are branches in DC, Jacksonville, and Phoenix, and they have 300,000+ participants at this point. Yet, New Orleans offers a field of play unlike anywhere else because “…a lot of these concepts of playfulness are already infused in our city,” Obuchowski says. There’s the obvious uproar that we have with Carnival, but there’s also the fests that line our calendars throughout the year, the swimming in the bayou when not floating around on giant unicorn rafts, and we can’t  forget our affinity for lighting things on fire to celebrate New Years Eve. And you’ve never felt more like an inner-child adult than when you turn to the bartender and ask, “Can I get that Scotch on the rocks in a to-go cup?”

But it’s not just our big celebrations that make us smile and sway while on our merry way; we have smaller, close-knit communities where people share their passions, interests, and trade secrets. Take, for instance, all the micro breweries that are popping up around town. Driving down Tchoupitoulas Street now offers the senses smokey barbecue smells and a variety of hearty, light, and everything in-between beers. Nola Fray has tapped into that scene, and it is where they’ll be holding their .5 K. 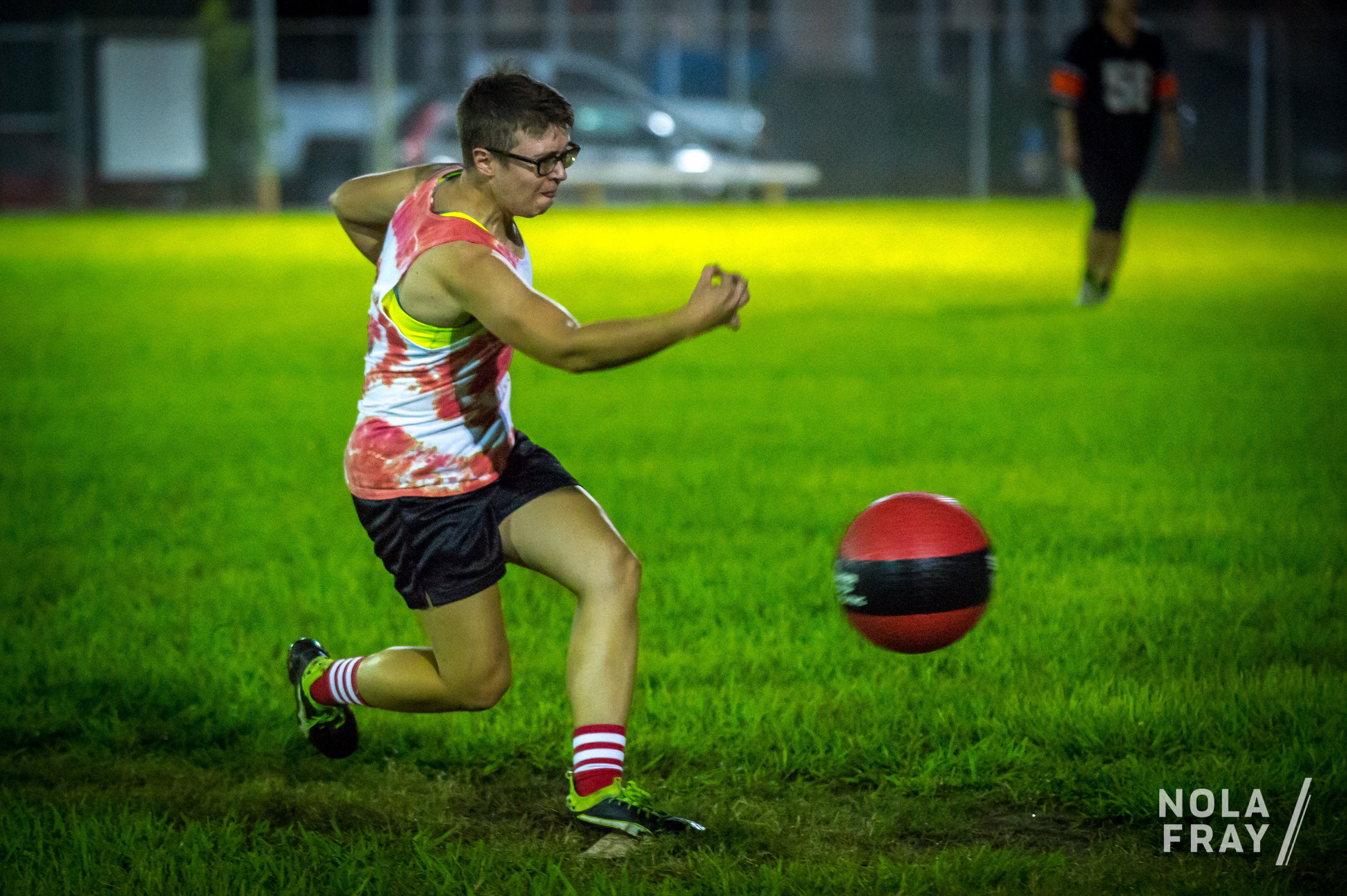 Kickball is one of the many sports Nola Fray offers to adults. (Photo courtesy of: Nola Fray)

The .5K race will begin at Miel Brewery and end at Tchoup Yard (the distance of a couple few blocks) where there will be music, drinks, food, and some prizes awarded for things like “Best Costume” (think best lazy running gear). “This concept of a second line is so inherent to New Orleans…” Obuchowski comments, and that’s why they wanted their initial event to embrace that tradition.

After the .5K, though, Nola Fray’s softball, kickball, and corn hole teams will get serious. This is a true competition where there’s a winning team. And what is the championship trophy?  A beer glass, of course. And for the captain of the team? They are awarded with a full pitcher if they lead their team to victory.

It’s a modern-day Odyssey, minus the archery and with the added bonus of team camaraderie.

To mark the official kick-off of NOLA Fray through the acquisition of the SSL, the organization will host The NOLA Fray 0.5k — The Ultimate Underachievers “Run” on Saturday, February 9th in partnership with Miel Brewery and Tchoup Yard (details below). Locals will have the chance to experience a typical NOLA Fray community event, meet new people and sign up for the organization’s spring sports leagues, beginning in March. Tickets are now available at www.nolafray.com.