We’ve got your weekend: To make you laugh, dance, think, and shimmer 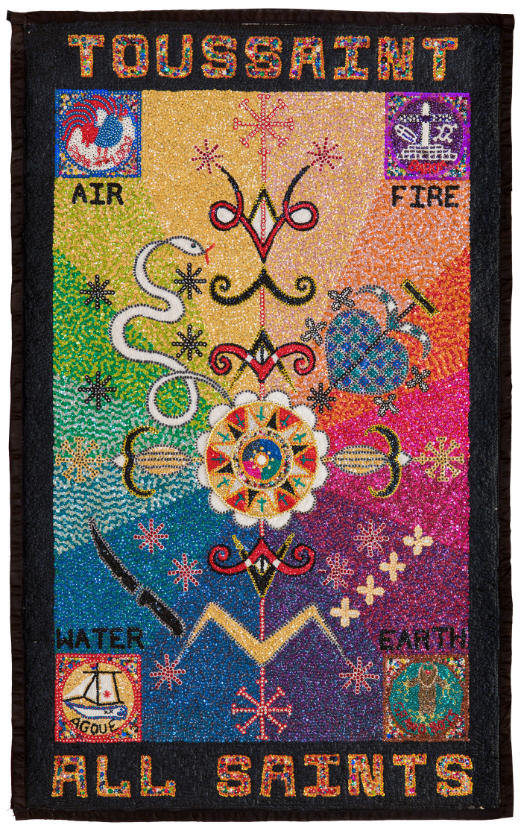 Tina Girouard, TOUSSAINT, 1991, Sequins, beads, fabric; 43 x 72 in, Collection of the Artist from NOMA’s exhibit Bondye: Between and Beyond (Photography by: Roman Alokhin, courtesy New Orleans Museum of Art)

Thursday, January 31/Sidney’s Saloon (1200 Saint Bernard Avenue): Sometimes you need a laugh to get you through the week. Even better, how about some free laughs that will be at the comedy showcase with the best local and touring comedians? This showcase is presented by Local Uproar and New Orleans Ice Cream’s New Cafe Bars! This week you’ll be hearing the comedic stylings of  Sam Tallent headlines,  Casey Ley, Giulia Rozzi and more. The showcase begins at 8:30 PM and goes until 10:00 PM. For full details, you can check out their event page.

Friday, February 1/New Orleans Museum of Art (1 Collins Diboll Circle): Many think of art as a religion, and NOMA is making that connection even more pronounced with their exhibit  Bondye: Between and Beyond, which is on view  through June 16, 2019. It features a series of sequined prayer flags by Tina Girouard with Haitian artists in Port-au-Prince, where she established a workshop with accomplished sequin artists such as Edgar Jean-Louis and George Valris. Inspired by the blend of Caribbean, African and European culture in her own Louisiana hometown, these flags reference a range of international traditions expressed in Vodou, from All Saints Day in France to New Orleans Mardi Gras and Haitian Kanaval. The elaborate prayer flags displayed in Bondye: Between and Beyond pay tribute to the spirits of Haitian Vodou. These unseen entities, or loa, act as intermediaries between the human and spirit worlds and exist in many nations and cultures, reflecting the melding of West African, Catholic and Haitian spiritual practices that inform the practice of Vodou. And remember, the museum is free for LA residents on Wednesday

Saturday, February 2/Algiers Courthouse (225 Morgan Street): Since the 1970s, weeks before Mardi Gras, King Zulu and his entourage have second-lined along Broad Street to the Zulu headquarters to plant a flag at the clubhouse announcing the new royalty. The tradition of the flag-raising will continue this year, but with a change of venue. On Feb. 2, Algerine George Rainey will plant his flag at the historic Algiers Courthouse near the ferry terminal in Old Algiers to commence his reign as the 2019 King Zulu. Rainey has been involved in the Old Algiers community as a resident, restaurateur and civic activist for many years. A free celebration with live music, food and more will take place from 12:00 PM  to 5:00 PM in the parking lot across from the courthouse at 225 Morgan Street.

Saturday, February 2/Glitter Box N.O. (1109 Royal Street): You know what’s just as fun, if not more fun, than attending a 2 year-old’s birthday party? Attending a birthday party of an awesome business that is fierce and female-forward that is turning two. On February 2nd, 2017 the doors of Glitter Box N.O. were opened, and with their team and collection womxn and femme makers, as well as a dedicated group of activists and non-profits they have continued to blossom. They’ll  be celebrating turning two with the launch of the Babes in Business Online Directory and go-cup bedazzling on our limited edition Glitter Box Girl Gang cups, and they’ll also have some Glitter Nectar libations courtesy of Seven Three Distilling Company! The party starts at 4:00 PM and goes until 6:00 PM. For full details, check out their event page here.

Saturday, February 2/Saturn Bar (3067 St. Claude): If you missed last weeks 90s and early 00s dance party, we’re sorry. It was pretty epic, but have no fear because there will be another one, and to keep you satisfied during the in-between, Saturn Bar will be putting on Purple Rain: 80’s Vinyl Dance Party. This is the total 80’s experience with lights, lasers, 80’s visuals, and of course all of your favorite 80’s records with your host 80’s aficionado DJ Shane Love!
All genres; they’re saying is, “If its 80’s and you can dance to it, we’ll play it.” The night begins at 10:00 PM and goes until late. There’s no cover, and you must be 21+. For full details, check out the event page.

Saturday, February 2/Molly’s at the Market (1107 Decatur Street): Are you looking to shimmer from head to toe this year for Mardi Gras (or for your date this weekend)? Well, you can practice that shimmer and come dressed in head-to-toe sequins and party in the streets of New Orleans to celebrate the re-brand and launch of Fringe+co. They are having a Sequin Secondline followed by a Sequin Social. They want you to dance, drink, be shiny. They will have new sequin goodies available for purchase, and it all starts at 2:30 PM. For full details, check out their event page.

We’ve got your weekend: New exhibits, premiere films, and theater unlike any other
Events