We’ve got your weekend: Fantasy in reality

Event pick of the week: Mother Courage and Her Children 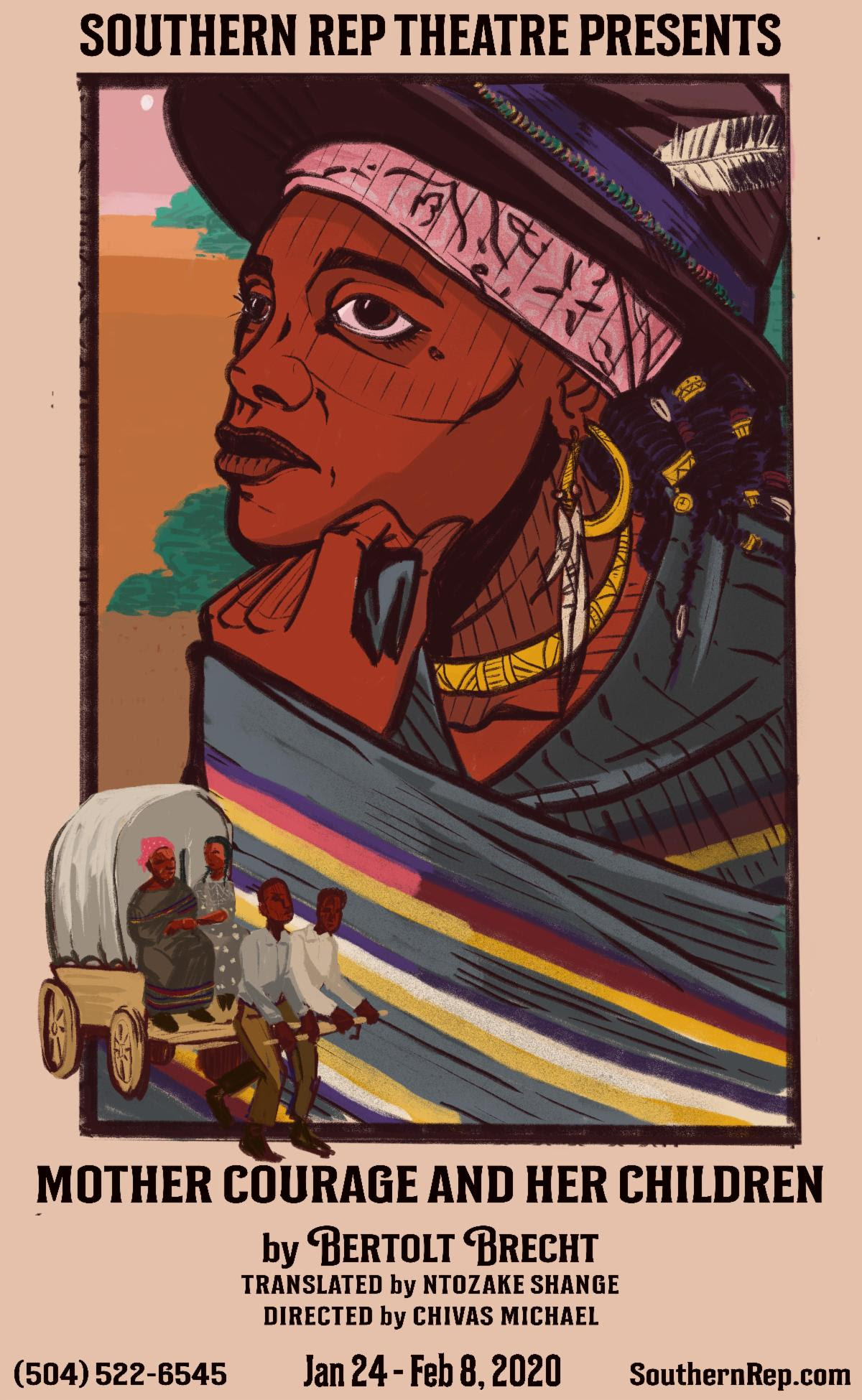 Mother Courage and Her Children is at Southern Rep for the final weekend. (Photo: Southern Rep)

What: Poet-Playwright Shange (For Colored Girls) adapted Brecht’s classic drama in 1980, transposing the action from Europe during the Thirty Years War to the American Southwest after the Civil War. Mother Courage struggles to survive the war by profiting from it but ends up paying the ultimate cost. Shange’s adaptation is a uniquely American spin that forces us to ask how, in the darkest of times, do we survive with our humanity intact?

Why: Because we love local theater, and there’s only 3 more opportunities to see this show!

Wednesday, February 5/Southern Rep Theater (2541 Bayou Road): It’s time to stimulate your eyes with the animating textiles from across the globe in Jodie Mack’s feature debut. Mack creates an  examination of objects that speaks volumes about place and labor. Shot on 16mm with an infectious soundtrack, The Grand Bizarre is a portrait the contrasts textures, patterns, and colors amongst a variety of landscapes. This kaleidoscopic experience draws into focus global connections through her playful stop-motion animation.This film will be presented on 16mm – print courtesy of Canyon Cinema. It’ll cost $8, cash or charge to get those eyes excited. Doors open at 7:00 PM, with films rolling at 8:00 PM. The Sanctuary Bar inside Southern Rep will be open for all your beverage and popcorn needs. For more information, you can check out the event page here.

Friday, February 7/Staple Goods (1340 St. Roch Ave.): We know that there is art rolling down the streets now that it’s Carnival time, but there’s also some art happening indoors that you don’t want to miss. Staple Goods is exhibiting 18  local photographers who are rarely seen in the wild in large groups; this will be an occasion to meet so many of them in one place, and have their work side by side. The images that will be displayed were all taken on a Mardi Gras day, downtown below Canal. The works will be hung in a salon style  –  a riot of imagery, in color and black and white.  Grouped tightly together, the show aims to recreate that quasi off-balance claustrophobic feel of pressing through the crowds in front of Mimi’s in the Marigny, or trying to navigate a Bourbon St crossing when you look up and see a crowded balcony with the sky full of beads and bubbles. In other words, if you want to little Mardi Gras warm-up, this is the exhibit for you. The opening is on Friday from 6:00-9:00 PM, and it’s free and open to the public.

Friday, February 7/New Orleans French Quarter: And now for the portion of the weekend where it sounds like we’re on a permanent acid trip in New Orleans. Krewe Bohème invites you to come take flight through the streets of New Orleans as its eccentric revelers present a visual and auditory feast of mystery, artistry, and fun with a marching parade through the Marigny and French Quarter during our L’Heure Verte (“The Green Hour”) at 7:00 PM on Friday, lead by their Supreme Green Fairy, Tarriona “tank” BALL of Tank and the Bangas! After the parade, you can join the krewe at the Joy Theater for the Krewe Bohème Absinthe Ball featuring Sweet Crude and performances by LadyBeast Productions, Trixie Minx Productions, and DJ Kerem! For more information and tickets, you can check out their event page here.

Saturday, February 8/Waldorf School of New Orleans (2539 Columbus Street): It’s not everyday that you get invited to a Treetop Circus, but that day is now today. On Saturday, the Waldorf School is putting on their  ‘for kids by kids’ circus, and this year’s performance  features two separate acts: one designed and performed by their 4th and 5th grade class and the second by their 6th and 7th graders. It is the culmination of their study of show making and circus arts as part of their movement curriculum. The circus will start at 2:00 PM, tickets are $5 (kids) and $10 (adults). Proceeds will support purchasing additional equipment for the circus arts program, particularly mats for acrobatics and more gyroscopic juggling items such as plates, diabolos, and devil sticks. A portion of proceeds will also support upcoming class trips.

Saturday, February 8/Fair Grounds (1751 Gentilly Blvd): Red beans and rice has been a staple of Louisiana Creole cuisine for hundreds of years, but it has never been eaten with the speed and passion that will be on display at the upcoming Blue Runner Foods World Red Beans and Rice Eating Championship. The event will feature Joey Chestnut, the top-ranked competitive eater in the world competing against Geoffrey Esper, second-raked competitive eater in the world, among other Major League Eating star competitors. Organizers will prepare more than 1,000 pounds of Blue Runner Foods Red Beans and Rice for the competition, which will be Major League Eating’s first sanctioned event of 2020. The racetrack doors open at 11:00, racing starts at 12:30, and the eating contest begins at 3:30.

Saturday, February 8/Docville Farms (5124 East St. Bernard Highway): If you’re feeling like you’re going to be hungry on Friday, we’ve got the cook-off for you. Docville Farm in St. Bernard Parish is holding their third annual Cook-Off for the Coast from 11:00 AM to 3:00 PM! Local cook teams will battle in a wild game cooking competition featuring Louisiana’s wild bounty – free samples for attendees while supplies last. There will also be music by Soul Creole, kids’ activities, information on how you can support coastal restoration and cash bar by Pirogue’s Whiskey Bayou. This year’s event will benefit the Chandeleur Sound Living Shoreline program, a partnership with Nunez Community College CTE, which builds and installs oyster breakwaters along the Northern of edge of Comfort Island. The Cook-Off for the Coast is free, open to the public, and you can find out full details here.

We’ve got your weekend: Light it up with some haunting jaunts
Events