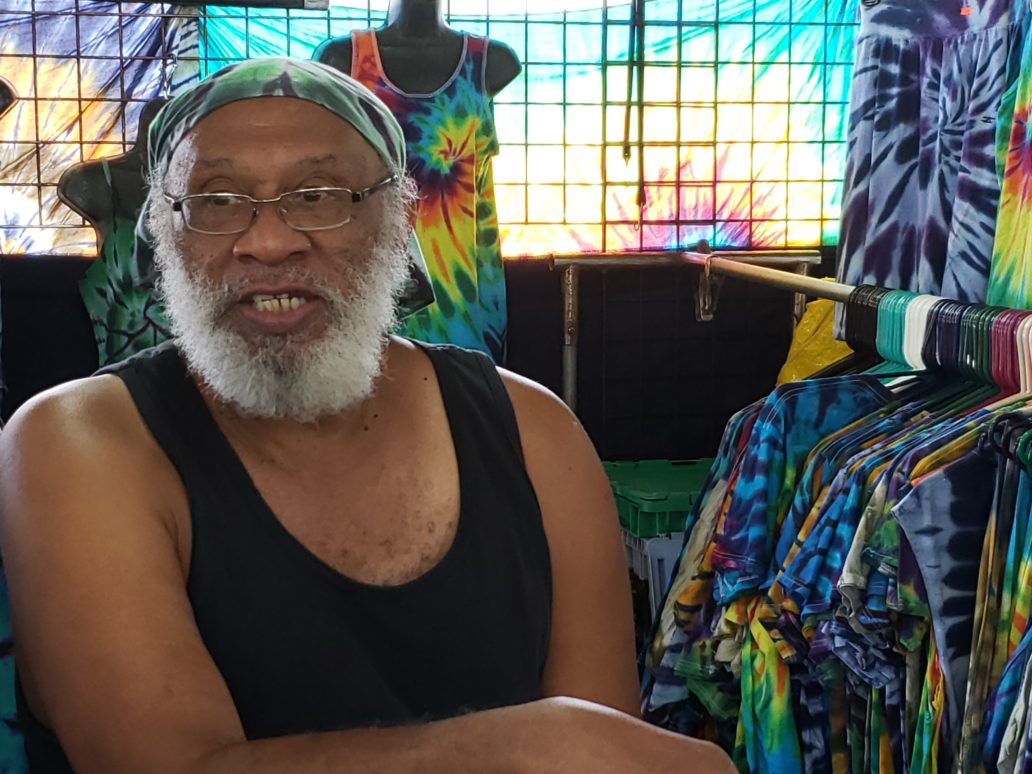 Zahdan Sterling with his work in the French Market. (Photo by: Lacar Musgrove)

You can also read part I and part II of “Fabric Warrior.”

Zahdan sets up his booth at the French Market, now under the steel canopy in stall number 129, almost every Saturday and Sunday. Kaleidoscopes of t-shirts, dresses, pants and skirts hang on chrome rods that run between and jut out from three walls of black metal grid.  A sign propped on one wall says, “NO WAR.” Tourists and locals stroll the aisles of the open-air market. Across one aisle from Zahdan, a vendor sells scented oils and New Orleans t-shirts — $5.99 or four for $20. In front of his booth is a table stacked with used books. Filed in old Coca-Cola crates, sci-fi books are $1 each.

Originally an Indian trading post, the French Market occupies a space between the French Quarter and the Mississippi River. It has been through many transformations throughout the history of the city, and its current incarnation is mainly a tourist destination where vendors — often immigrants — sell souvenir t-shirts and Mardi Gras masks and beads alongside novelty items, jewelry, books, toys, purses, wallets, and textiles. Before Hurricane Katrina, produce, seafood, spices and other edible fare were available, as well. Now, there is produce sometimes, but mostly it’s just the flea market, which isn’t very useful to locals (unless you need to do Christmas shopping and hate malls). But when I was a child, the organic nature of it, the array of eclectic merchandise, and the vendors with foreign accents fascinated me.

Around 1991, when I was ten or eleven years old, I might have walked by a small booth in front of the French Market, in the asphalt lot, where tie-dyed t-shirts were hanging on a cord in the afternoon sun. This may or may not have happened, but it is possible that I, as children will do, reached out my hand as I walked by and ran my fingers along the row of t-shirts bursting and swirling with color and said, “oooh,” and that the black man in his mid-thirties standing there with dread-locks fanning out behind his head smiled and said, “Hello, there.” 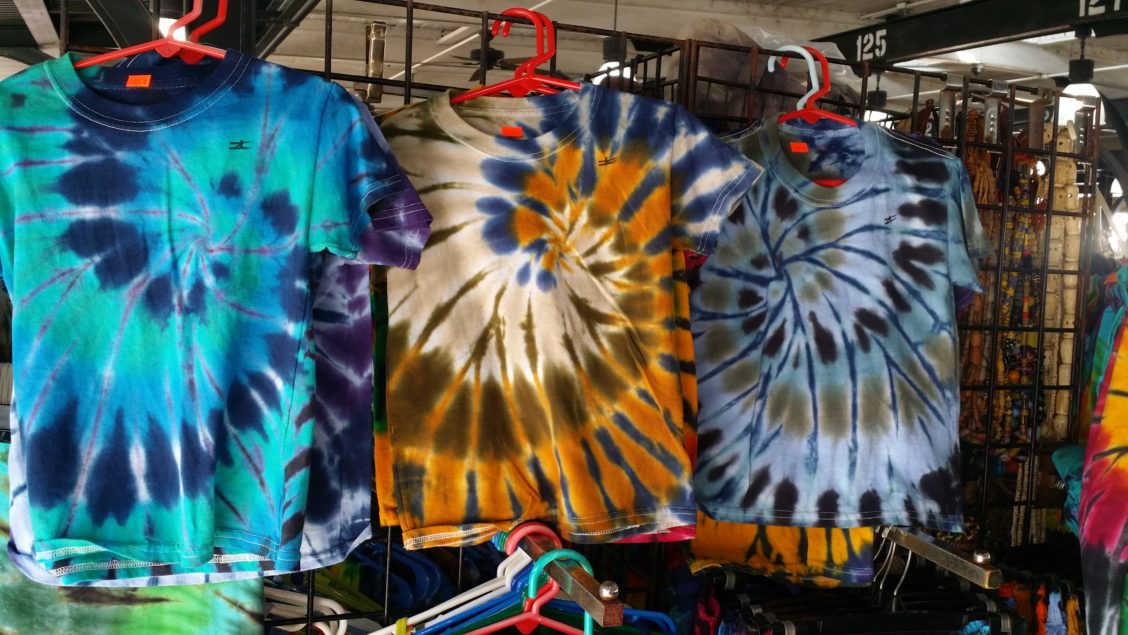 On Valentine’s Day, I sat with Zahdan at the market. Teenaged couples walked by hand in hand and stopped to finger the bracelets and necklaces of African trade beads that Zahdan now sells along with the tie-dyes. A couple of middle-aged women pulled dresses off the rack and held them up against their bodies in the mirror propped against one wall of the booth. Zahdan talked with his prospective customers, helping them with sizing and pointing out the lines of the Submergence and Emergence, the concentric circles of Eruption, and the face in the Sphynx. I noticed that he managed to work in frequent references to his new girlfriend, the sweet habit of new love that, I smiled to realize, persists in a man of fifty-six.

A young girl — probably around 10 or 11 — walked by with her family. Turning her head, she gasped. “Oh, I love hippies.”

Sitting at his worktable, Zahdan squeezes dye from plastic bottles onto the disc of cotton, filling in the pie shapes outlined by the rubber bands. The purple, green, and orange dye pools for a moment then seeps into the crevices of the spiral.

In contemporary American culture, tie-dyeing is inextricably bound with the image of the hippie. Hippies did not invent tie-dye, but its lasting permeation into American fashion, if you can call it that, can almost certainly be attributed to one sub-group of the1960s hippie culture — the Diggers.

The Diggers were a group of counter culture operatives in San Francisco in the late 1960s. If you like whole wheat bread, thank the Diggers. Many people credit their famous Digger Bread — baked in coffee cans and distributed at the Free Bakery — with the advent of a taste for bread that, in contrast to commercial products like Wonder Bread, resembled real food.  If you are looking for someone to thank — or to blame —for American tie-dye, you might want to look up a gal named Judith Goldhaft. 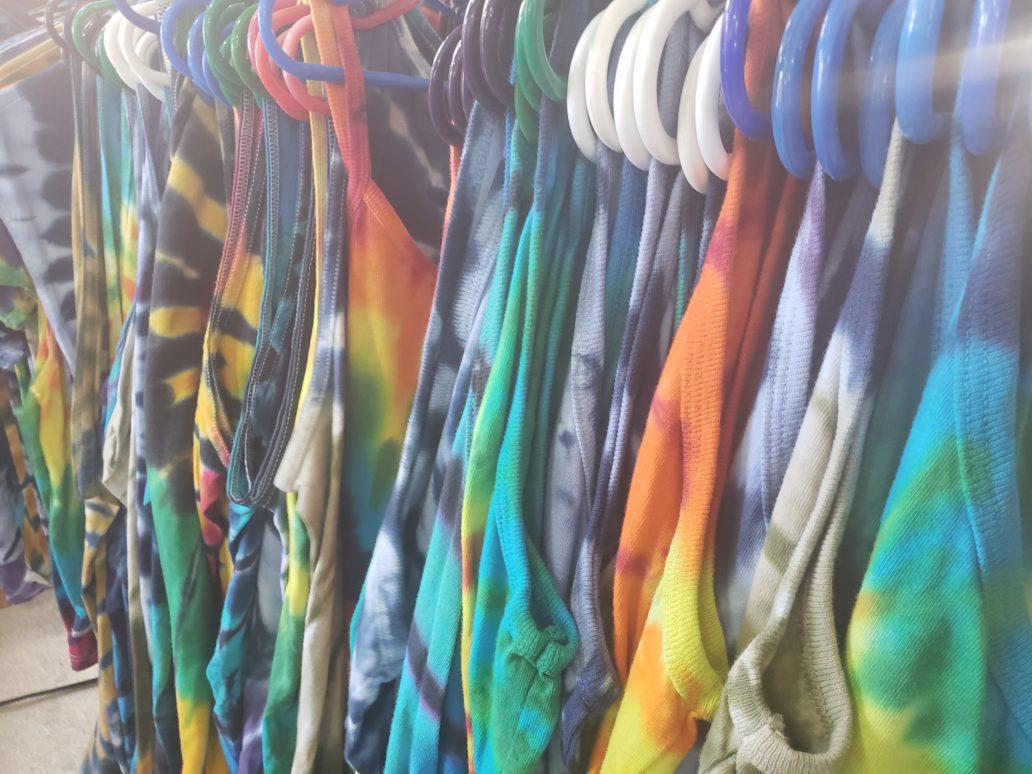 One of the projects of the Diggers was the Free Store, at times referred to as the Free Frame of Reference or Trip Without a Ticket. Scrounging for free things and encouraging people to donate unwanted clothes and household goods, they set up a shop where people could take what they needed for free. The women set up a sewing and dyeing shop for people to bring their clothes in to be repaired, patched, and dyed.[4] A photo from that period shows Goldhaft holding up a long twisted snake of fabric bound with rubber bands crisscrossing every inch or so.[5] It was in that shop that Judy taught the other women how to tie-dye old clothes.[6]

After that, the art of tie-dye was passed from person to person. Twenty years after Judy Goldhaft taught the women of the Free Store shop how to tie-dye, Zahdan learned it from Greg and his wife Tiffany.

In late 1988, Zahdan and Miranda’s motorhome pulled up to a laundromat in Nachidoches. Inside, a girl named Tiffany sat playing guitar. Zahdan struck up a conversation with her. He had a necklace that he needed repaired. She knew the knot, something called a “spirit weave.” So, he followed her home, where he met her husband, Greg. They had just learned to do tie-dyes from a man called Tie-Dye Ron in Austin. Greg was really excited. He was, Zahdan swears, literally bouncing off the walls. They had learned from Ron how to do a basic spiral and were experimenting with making different patterns by folding the fabric in different ways. They had names for the new patterns. Emergence. Submergence. Greg was adamant that Zahdan learn how to do it.

“From Jump Street I had no interest.”

But Zahdan started spending a lot of time at their house in Nachidoches, anyway. They were all playing music together. One day, in the spring of 1989, he came through with a few polo shirts he wanted tie-dyed. He went off to work and came back two weeks later to find the shirts still weren’t done. Greg, Tiffany, and a guy named Mike, who was staying there at the time, went out one afternoon that weekend, leaving him alone in the house. He’d been watching the three of them tie-dye for a few weeks and figured he knew how to do it. So.

“I went to dye those shirts.”

By the time his friends returned a few hours later, he had gone out and bought a dozen more shirts to dye.

“And I was certainly, uh, infected, I guess you could say.”

Fabric warrior (part IV): Zahdan Sterling and the finished product – Via Nola Vie
Recent Posts on ViaNolaVie
Footprints: An interactive public art map Kelley Crawford, Steven Melendez, and Emma Fick worked together to create a custom interactive public art map for New Orleans. This project was made possible through a grant provided by EPNO (Emerging Philanthropists of New Orleans)! Take a walk and click away!