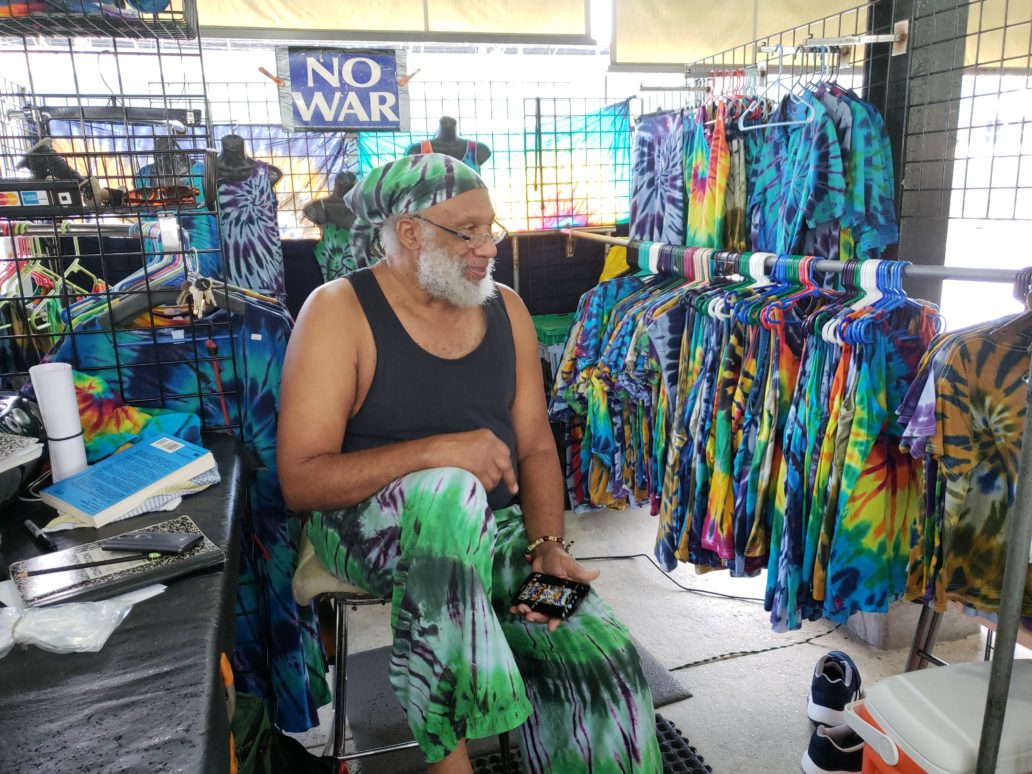 Zahdan Sterling with his work. (Photo by: Lacar Musgrove)

To prepare the clean, white fabric for dyeing, Zahdan first soaks it in soda ash. “How Procion MX dyes work,” he says, “soda ash opens the molecules on the fiber and you dye into it. And the dye bonds to the molecules of the fabric, not on just the strands, like Rit dye does not bond, it’s just like coloring the outside. Fiber-reactive dye goes completely through and saturates it.”

Procion MX, a cold-water fiber-reactive dye, was first developed by ICI (Imperial Chemical Industries) England in 1956.[1] This dye can be applied directly to the fabric without submerging in vats. This innovation made it possible to apply several colors simultaneously, a technique that is necessary to create the patterns common to contemporary tie-dye design.

Unlike Rit and other grocery store dyes, which merely stain fabric, fiber-reactive dye does not wash out. This is because the molecules in fiber-reactive dye bond with the molecules of cellulose—the fiber that makes up both cotton and wool–in a covalent bond, which means they share electrons. Soaking the fabric in soda ash, an alkaline, increases the number of negatively charged hydrogen ions in the fabric. The hydrogen ions help the dye molecules bond with the cellulose molecules by supplying the extra electrons needed for the chemical reaction.[2]

Zahdan understands the science. In 1968, before his senior year in high school, Southern University in Baton Rouge recruited him to study chemistry over the summer and awarded him a scholarship to attend the university the next fall. Zahdan tells me that, because of his precocious interest and aptitude, he probably could have studied chemistry at any school in the country after he graduated high school. Instead of graduating high school, though, he left a year early, accepting the scholarship offered him by Southern University. His decision, he says, was based on his wish to avoid the turmoil of forced desegregation that had begun that year in Point Coupee Parish.

Until that year, the local school board, in an effort stave off forced desegregation, had funded the black high school, Batchelor High, very generously. Zahdan allows that the ample funding of his high school chemistry lab is probably what allowed him to become a chemistry whiz. In another ironic twist, the program for which he was recruited at SU was itself a response to desegregation, an effort by a traditionally black university to attract bright young black students whom they were losing to other, recently desegregated, institutions. 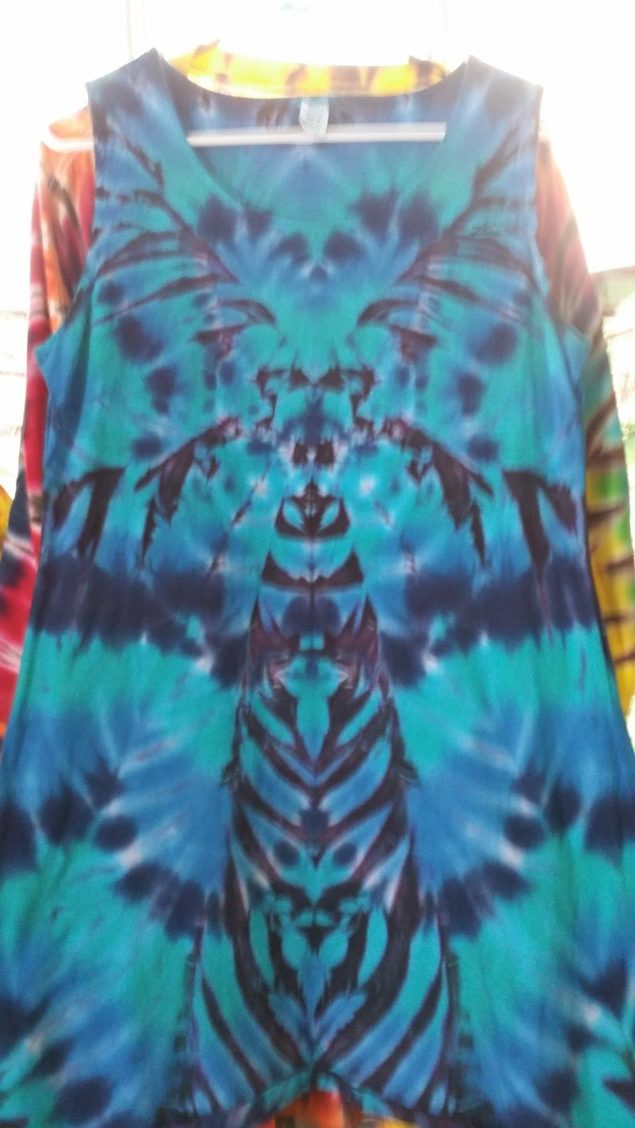 College was a transformative experience for Zahdan, as it is for a lot of people, and he finished with a Bachelor’s degree not in chemistry but philosophy. His work as a tie-dye artist just brushes the surface of his inner chemist, who, he says, is “very submerged.”

In the fall of 1983, Zahdan was hanging out and playing music with a friend at a house near the University of Houston. He had graduated from Southern University in 1975 and was working in carpentry around Nachidoches, Texas, near the Louisiana border. In a house full of college students where people came and went, a young woman named Miranda came in to take a shower. They met and ended up, somehow, pitching a tent in the living room for two weeks, from which they emerged only for toilet and cigarette breaks.

“They come out,” others replied, “but they don’t stop.”

When the “tryst in the tent” ended, Miranda promptly fell in love with another guy, quit college and ran away to New Jersey. But she was soon back, heart-broken and without a plan. Zahdan invited her to come along and work with him. He had gone to work for Community Action, weatherizing the homes of poor people on government contracts. By then, the health of his father in Point Coupee was failing fast, which meant that Zahdan needed to spend as much time as he could at home. He moved into his grandmother’s house and, as a side project, started growing elephant garlic at his mother’s.

With work in Nachidoches, social life in Houston, and family obligations in Point Coupee, Zahdan and Miranda went on the road in his big 1974 Ford pick-up truck that he called the “Mad Green Machine.” He’d built a camper on the back with enough room for tools and a bed. Around the beginning of 1985, they were on their way back to Texas from New Orleans when they spotted a motor home for sale on the side of the highway. He turned around and bought it that day. For the next three and half years, Zahdan and Miranda traveled and worked out of that motor home.

Zahdan spreads a pair of white drawstring cotton pants onto the worktable. He jabs a slender wooden dowel just to the left of the crotch and twists. As he wraps the fabric around the dowel, his fingers pleat with casual precision, forming a nine-inch round lump of damp, white cotton that looks ready to be popped in the oven and come out a cake. He stretches his arm across the table and plucks four rubber bands from a bin, snapping them around the fabric to hold it in place.

He’s making a simple spiral, like the one in the shirt he made for me. He forms Eruption, Submergence and Emergence by folding the fabric before twisting. Folding and “scrunching” the fabric rather than twisting makes other patterns, like the Sphynx.

Tie-dyeing is a form of textile art that has been practiced in many cultures — Japanese, Chinese, Indian, Persian, Peruvian, South American, and African — for thousands of years. It is a form of resist dyeing, in which restricting the flow of dye to certain areas creates patterns in the fabric. In batik, patterns are drawn onto the fabric with wax, which is later dissolved, leaving its shape in relief. In the Indian art of bahndanni, points of fabric are tied off with bits of string to make small circles. In Japanese shibori, many methods, such as string-tying, pleating and stitching, are used to bind the cloth and create intricate patterns.[3] The form of tie-dyeing familiar to contemporary American culture, which Zahdan practices, was developed in the 1970s. Many people, including Zahdan have come to make their living by it, as Zahdan eventually would: an outcome of many twists and folds of fate. 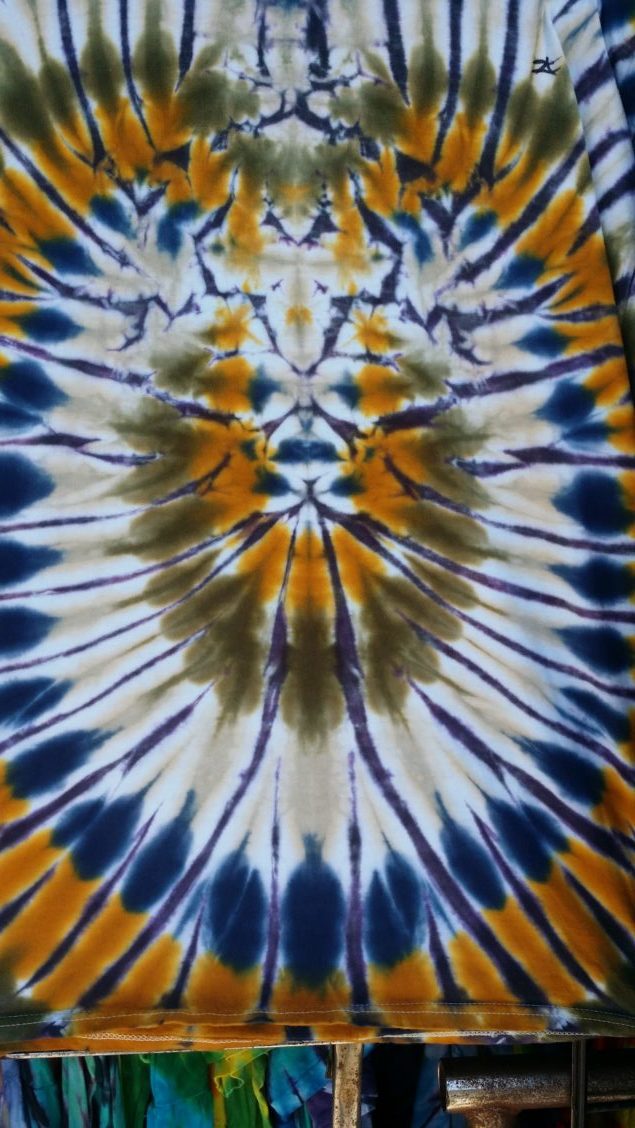 For three and half years, the weatherizing contracts took Zahdan and Miranda all over three counties in Texas. They would stop in Nachidoches to get their work assignments before heading out for three or four weeks of work, each job taking two or three days. Because they had a motor home, they were sent on the farthest-out jobs. They would rattle down “boon-docky” roads across several pastures, cattle gaps, and watering holes to places where it was hard to believe anyone had a house. They went out to the homes of elderly people who couldn’t afford to maintain their houses and did things like install insulation and solid core doors and seal windows. The government allotted a certain amount of money for each house, ostensibly to prevent air infiltration. The allotment grew from $400 to $1400 per house. “From that point on, I used every penny I could get my hands on to do everything I could for these people because, basically, it was a one shot deal . . .. These were people who’d worked all their lives. They deserved every penny they could get from the government.” Zahdan did the hard labor while Miranda did the “goop work.” She finished the day with caulk in her hair and shellac in her eyelashes. “It was what you call ‘division of labor.’ She got to sleep late every day. She got nothing to complain about. It was great.”

When Zahdan told me this story, he laughed at this part, then sighed. The ice in his drink rattled against the side of the glass as he took a sip.

“We understood from the beginning the relationship had a definite time period to it.” The expiration date turned out to be 1989, the year he first sold tie-dyes.

Fabric warrior (part IV): Zahdan Sterling and the finished product – Via Nola Vie
Recent Posts on ViaNolaVie
Footprints: An interactive public art map Kelley Crawford, Steven Melendez, and Emma Fick worked together to create a custom interactive public art map for New Orleans. This project was made possible through a grant provided by EPNO (Emerging Philanthropists of New Orleans)! Take a walk and click away!