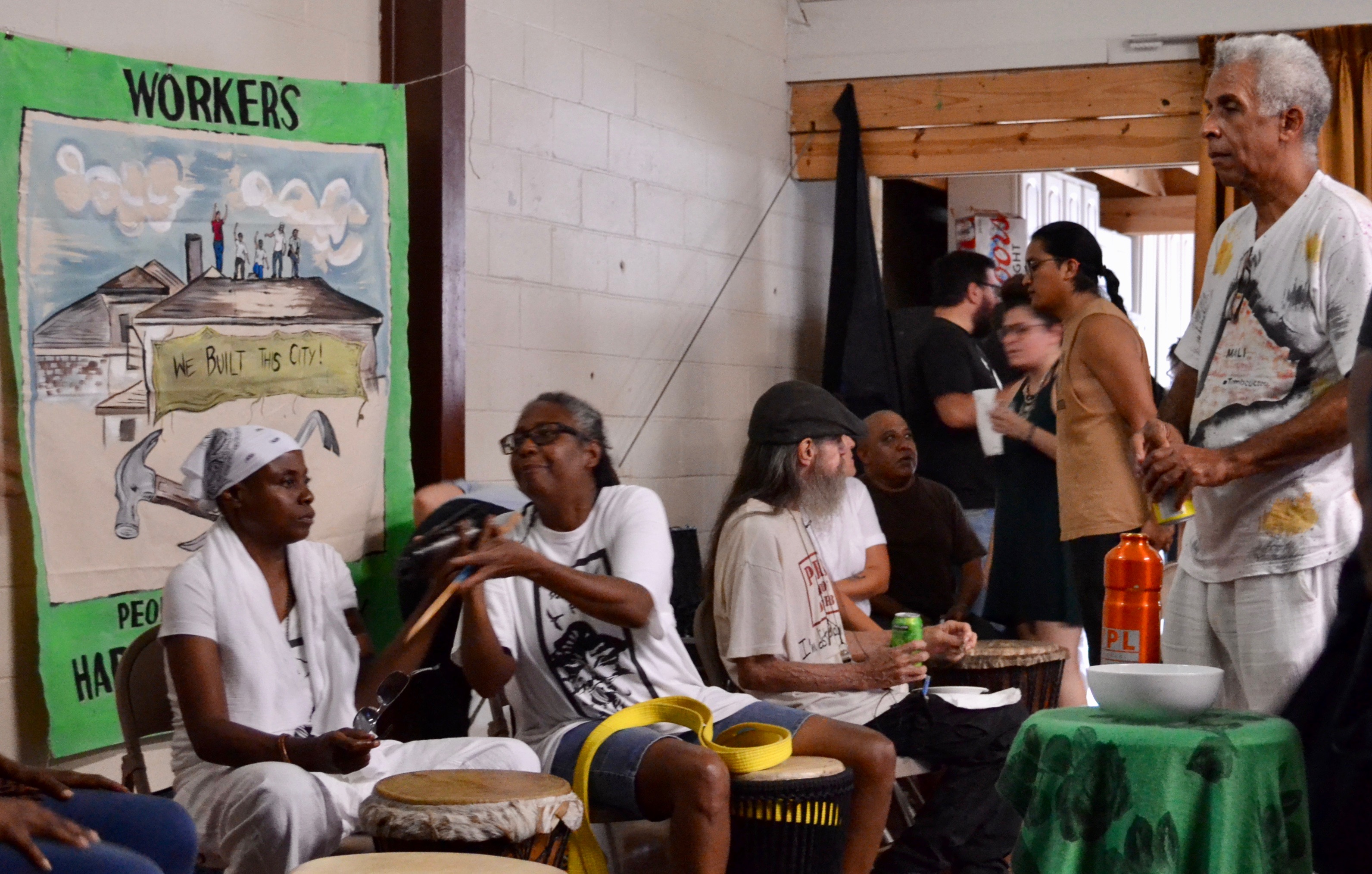 Stories of Survival brought together the New Orleans community to talk about Katrina, displacement, and long-term solutions. (Photo: Kelley Crawford)

The air was thick at Catapult Studios (609 Saint Ferdinand Street) in the Bywater, on September 1. There were  industrial-size fans blowing, people sitting in a large circle sometimes singing, sometimes playing music, and always telling stories. The event was called “Stories of Survival,” and we talked with two of the folks — Jayeesha Dutta, a member of Another Gulf is Possible collaborative and strategist for Story Shift, which is a project out of Working Films, and Fernando Lopez, a collaborator with Another Gulf is Possible and a photographer in New Orleans — who were behind the scenes making this environment available to all.

Dutta and Lopez  know how important narratives and collaboration are, and at “Stories of Survival,” there were translators, group activities, music in the round, leaders, listeners, and discussions about how the stories of individuals fit into the larger stories created by a community. This layering of partnerships is palpable when attending an event like “Stories of Survival” because this initiative is part of even larger initiatives.

“It connects to the Story Shift project, which ‘Stories of Survival’ is part of and the biggest initiative to date coming out of the project. Story Shift itself is rooted in certain geographies, and those are all geographies that are part of the project, “Dutta explains. “In each place we’re hopefully trying to build some connectivities and structures for longer-term survival, so next time a disaster comes, we’re able to take care of each other better than the time before. We are using art and culture as a catalyst for starting to build that network, connectivity, and infrastructure.”

“Stories of Survival” is currently on tour, having been to Houston and New Orleans, and then heading to Puerto Rico on September 17. In each new place, the community gathers together to tell their own stories and to listen about what still ails and afflicts those affected by trauma, disasters, and even the supposed “help” that came, and has not possibly gone.

“If we don’t create these spaces for people to tell their own stories and create and shape their own narratives, there’s no way people will know about what’s going on…on the ground,” Lopez says. “Being able to create the space and document [those stories] is important for future reference. You are connecting the artistic element, the cultural part, the spiritual part, and the documentation of our own stories as a way of survival.”

It’s not a matter of if another disaster will occur but when, and although support comes in waves, those waves can get smaller and less impactful as time passes, even though the need for help is still high. That’s where storytelling and community really come in.

“For us, as grassroots folks who are advocating for those who continue to be in recovery 13 years later, we want to support the amplification of those stories,” Dutta says. “We’re not seeing that happen, even as much as us grassroots folks, artists, and storytellers have been trying to bring those stories; this is another attempt at that. It’s also an attempt to resource community artists. The artists that are in community day in and day out and do the work of documentation and story telling for communities. We want to model who the people are that are trusted by the community to tell the story of our community.”

The trusted voices on September 1 ranged from the Guardians of the Flame, the Congo Square Preservation Society drummers, and the New Orleans People’s Assembly to  anyone who told stories through the form of song, dance, paintings, and not only community interaction but community togetherness. “Stories of Survival” is heading to Puerto Rico on September 17 to hear more people tell their own stories, but even though the event has left New Orleans, the words and actions of those who want to help are still here.