Herman Leonard: A return to the Crescent City 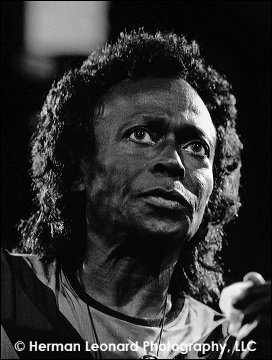 Herman Leonard fell in love with photography. Then, he discovered jazz. Yearning to meld his passions, he became the most prolific and renowned photographer of the ’40s, ’50s an ’60s jazz era, shooting hundreds of artists in clubs and recording and rehearsal studios.

In 1992, when most of his most famous artistic work had been done, he moved to New Orleans to get in close proximity to music. Then Hurricane Katrina struck. Thousands of irreplaceable black-and-white prints, as well as darkroom notes, were destroyed when 8 feet of water poured into the ground floor darkroom of his Lakeview home. Fortunately, many priceless negatives had already been secured in a vault at the Ogden Museum.

“It’s just like cooking. If you are going to go in and make a favorite dish with the same formula, it never comes out the same,” Leonard told NPR two years after the storm.

A framed portrait prepared for shipment was left behind, inside the house, acquiring a moldy aura around Frank Sinatra’s face. The photographer described it as a “work between God and Herman Leonard,” remembers Stephen Smith, Leonard’s son-in-law. After Katrina, the 84-year-old photographer returned to Los Angeles to continue his work.

Leonard was a masterful darkroom technician who would dodge (decrease light exposure on parts of the image), burn (increase exposure) during the developing process, and spot (retouch) final prints for remarkable effects. Before high-speed film, he broke thermometers to allow mercury vapors to magnify the film’s light sensitivity. Eight thousand prints lost in Katrina were essentially one of a kind. His images were stark, high-contrast and intimate, often with a swirl of cigarette smoke curling upwards in the foreground.

“That smoke was part of the atmosphere and dramatised the photographs a lot, maybe overstylized them,” he said.

“My whole principle was to capture the mood and atmosphere of music,” he told a reporter at The Guardian.

The image of the legendary trumpeter Miles Davis commanded attention at the Jazz Museum. Davis was one of the most influential musicians and composers of 20th century jazz in his 50-year career. “It is impossible to make an uninteresting picture of Miles Davis,” said Leonard who became close friends with Duke Ellington, Dizzy Gillespie, Charlie Parker, Lena Horne, Billie Holiday, Louis Armstong, Quincy Jones and many more. While living in New Orleans, he photographed the Jazz Fest, including Wynton Marsalis, Allen Toussaint and Lenny Kravitz. 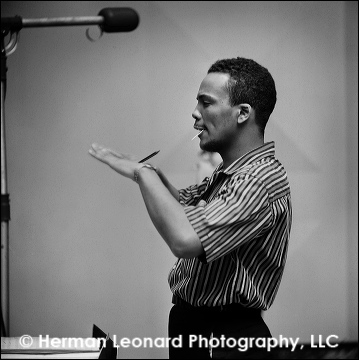 “He enjoyed life. He was like a teenager. He was ready to see a show at midnight,” recalls Smith who, with his wife Shana Leonard, also moved to the Crescent City.

After serving in World War II, Leonard earned a photography degree from Ohio University. He immediately drove to Ottawa, Canada in hopes of apprenticing with the famed portrait photographer Yousuf Karsh. Assisting Karsh in the darkroom and photographic sittings, he met celebrities such as Martha Graham, Harry Truman and Albert Einstein. When Leonard asked Einstein how a musician and mathematician were alike, the scientist deftly replied, “improvisation.”

In 1948, Leonard set up a studio in Greenwich Village and offered jazz club owners free publicity stills in exchange for admission. A few years later, he was invited to work in Paris, photographing French recording artists like Charles Aznavour, Jacques Brel and Johnny Hallyday, as well as working for fashion magazines and advertising agencies.

He exhibited his jazz photos at the Special Collections Company in London in 1988 and became an overnight sensation, touring the United States the following year. After living in France and Spain for more than 30 years, he returned to the U.S. to live in New Orleans, immersing himself in its jazz scene.

He died in 2010. For more information, see www.hermanleonard.com.

Recovered Memories of Spanish Influence
Exhibitions
We use cookies to ensure that we give you the best experience on our website. If you continue to use this site we will assume that you are happy with it.Ok