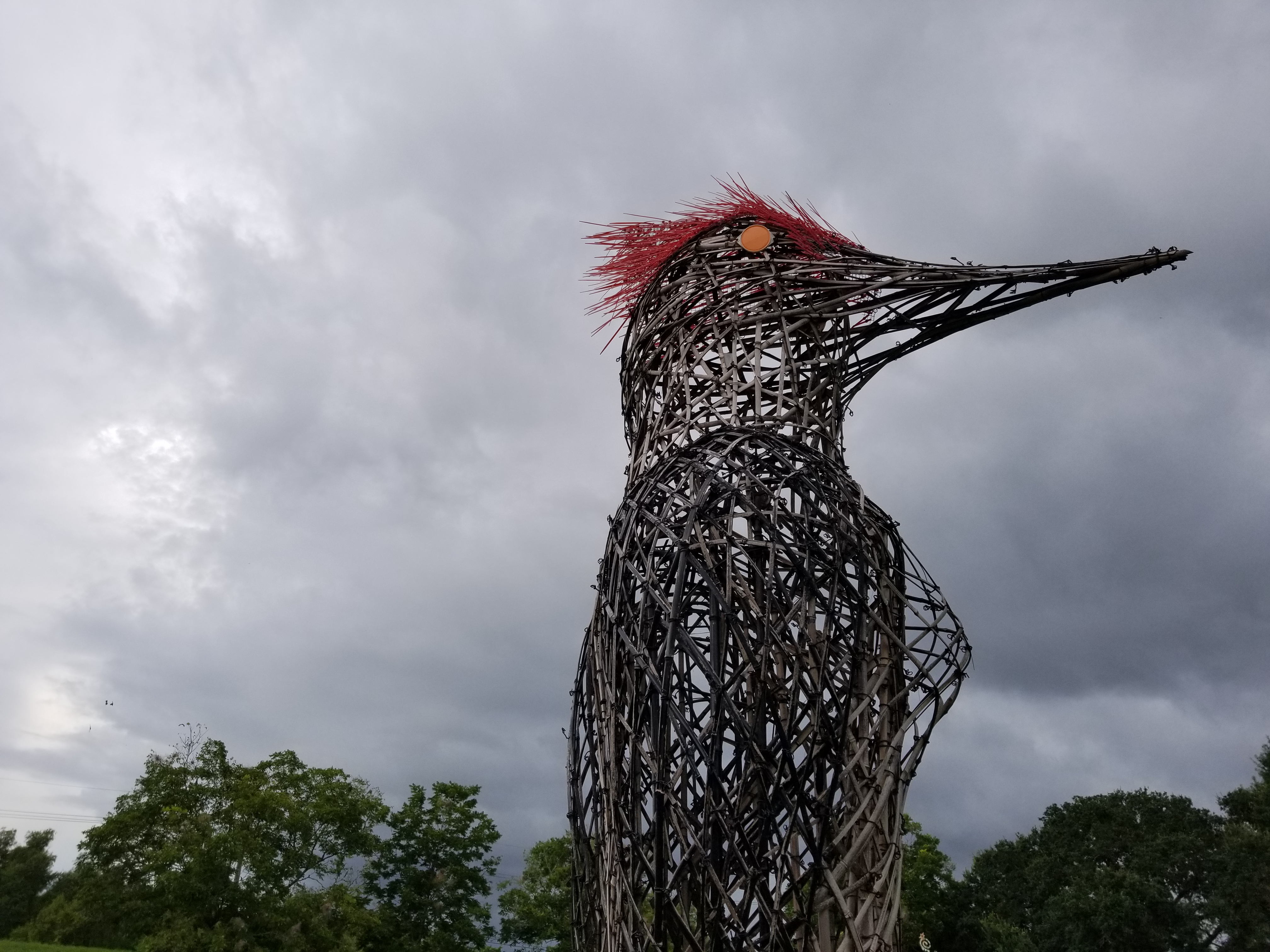 One of the things you will first notice approaching the at Crevasse 22 | River House in Poydras, Louisiana is the assortment of constructions dotting the yard, including a large, wood-entangled sculpture of a woodpecker. Sprinkled red paint on top its hollow head and orange eyes gazing outward, this organic monument from artists Donna Dodson and Andy Moerlein— which is meant to deteriorate over time— could be seen as a thesis statement for all the art on display: the beauty and risks of nature.

“The idea is to emphasize the environment though art and also to give art the space to breathe in a beautiful setting,” says Jeanne Nathan, Executive Director at the Creative Alliance of New Orleans and founder of Crevasse 22 | River House. When Nathan came back to New Orleans after a long career focused on marketing and public relations in New York City, she was interested in advocating for the arts in the city. This led her to co-found the Center for Contemporary Arts, as well as CANO. “I’m the type of person who says, ‘well, let’s not fuss, let’s do something!’” she says.

In 2014, when Nathan was invited by Sidney Torres III and Roberta Burns of the Burns-Torres Trust, to try and create something interesting with a property they owned in Poydras, she jumped at the opportunity. “I came out here one day for Prospect 3, looked around and said, ‘let’s do a pop-up sculpture garden and see what happens!’” says Nathan. It ended up being a smashing success with over 1,000 people making the trip to St. Bernard Parish for the last day of the showcase.

Since then the location, since dubbed Crevasse 22, has become a permanent sculpture garden and art center that continues to explore the intersection of nature, art, humans, and climate change through various exhibitions, including their most recent one entitled Migration. “Birds and boats are metaphors in this particular show,” says Nathan. “Migration is one of the options that we species— all of us whether it’s birds or humans— have in dealing with difficult environmental or political circumstances.”

Plenty of other pieces at the facility address these issues as well, such as works from conceptual artist Robert Tannen whose various installations on the site include a collection of wooden pallets symbolizing the constraints of levees (entitled Floodgate), a “Modgun” Model House meant to show different ways to live with water and hurricanes, as well as a black-painted vessel called Shrimp boat. “[They’re] about the things that we have to deal with that we don’t necessarily want to,” says Nathan. “So they’re kind of invisible and coastal erosion is one of them and he’s also posing the question of how long will we have shrimp boats here.”

Management of water and disaster are written into the history of the area with marks from the infamous flooding of 1927 on the Mississippi River— and the man-made devastation wrought on St. Bernard Parish— and the destruction of Hurricane Katrina still resonating throughout the landscape and community. Crevasse 22 | River House actually gets its name from a tear in the banks nearby that happened in 1922, which flooded the immediate area and created a lake that leads into Bayou Terre aux Boeufs. These moments define the area in many ways, and the art center and sculpture garden present a way for artists and viewers to talk about them and to think of what will come next.

It’s why Nathan continues to put together community events at the space, such as monthly Summer Second Sunday events which allow visitors to speak with artists featured in the exhibits about their work and their interest in the environment, participate in guided nature walks, and watch live demonstrations from crafts makers. Nathan also has begun making plans for a new exhibit for later in the year or early 2019, though the details are still murky. “I haven’t gotten a name for it yet,” she says, “but it has to do with landscapes and monsters.”

Above all, Nathan hopes the space continues to function as a meeting place for all whether they’re from Uptown in New Orleans or work locally in the seafood industry. “I remember reading a statement in an article and Sidney Torres had said that one of the main reasons for this place is to have a starter for conversations about the environment here,” says Nathan. “This is what it’s all about.”

Crevasse 22’s last Summer Second Sunday event will be held September 9th from 11AM – 4PM. Crevasse 22 is located at 8122 Saro Lane in Poydras, Louisiana, over in St. Bernard Parish. More information about the art center and garden be found on their Facebook page and on the CANO website.

“It took us 22 years– but we’re here”: Talking with Al Jackson of Treme’s Petit Jazz Museum
Audio and Podcasts

Into that kinetic realm: Talking Antenna’s Paper Machine with Executive Director Bob Snead and artist Christopher Deris
Art and media
We use cookies to ensure that we give you the best experience on our website. If you continue to use this site we will assume that you are happy with it.Ok