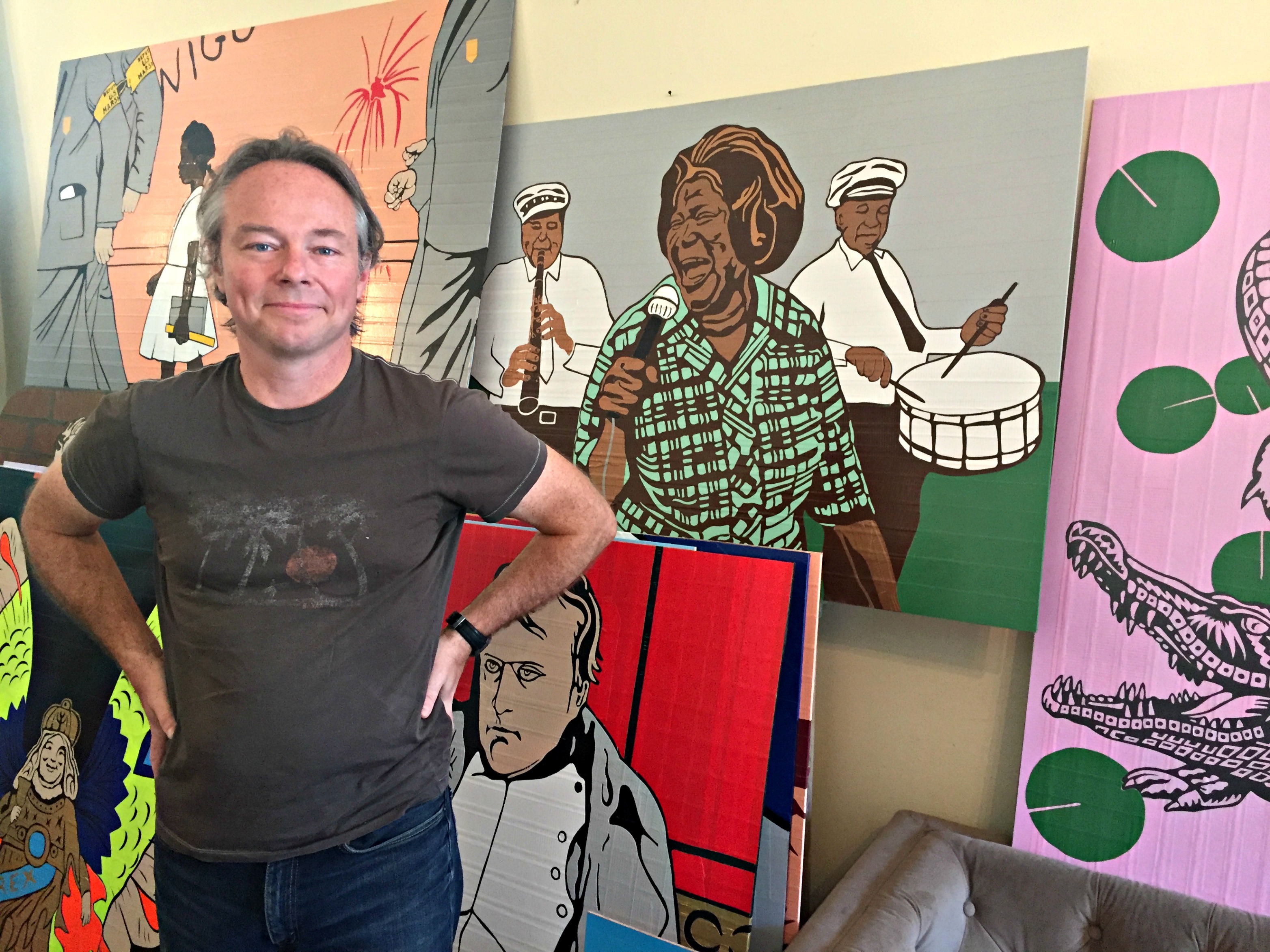 Moments in history can often put us in sticky situations. Artist Justin Lundgren proves that idea in the most literal sense possible. His newest exhibit, which will open on August 23 at the Reynolds Ryan Gallery (5333 Danneel Street), centralizes around moments in New Orleans’ history. And, all of his pieces are made of duct tape.

From alligators in the bayou to a piece portraying Ruby Bridges’s walk into an all-white school, Lundgren covers his canvases — often made of wood, steel, or glass — in strip after strip of duct tape. “A couple of years ago I saw some examples of duct tape art on the web. It was really colorful and unusual. I thought it was really interesting,” Lundgren says. Colorful is right. With oranges, purples, blues, and reds outlining the shapes of history, his 62 completed works cover the walls of his studio and take up residence on his floors. In fact, his wife, two children, and cat now have a relationship with duct tape that they never imagined since he’s often working on the pieces directly on his kitchen table. Behind that table, stacked in the corner, are piles of…you guessed it, duct tape.

“It’s a very weird medium,” Lundgren says. “It’s very colorful and very loud.” Adding to the impact of these bright colors are the size and content of his pieces. The Ruby Bridges piece is four feet by six feet, and the smallest of his works still scales to two feet by two feet. Seeing these large, vibrant images makes history pop out at the viewer, and they walk through time, controversies, and celebrations as they go from work to work.

While researching, Lundgren found the prospect of narrowing down historical events to a number he could feasibly transform into works of art rather difficult. As he read Richard Campanella Bienville’s Dilemma and walked around the city, he knew there were pieces he wouldn’t be able to get to — not just because of time but because of the event’s magnitude.

“There are quite a few [moments] still on my list,” he says. “They’re on my list because they’re really difficult to portray, and I’m still thinking about them and mulling them over. I’d like to portray the slave revolt that started in St. Charles Parish in 1811. It was quashed, but it was the country’s largest slave revolt, and they were marching toward New Orleans. I’m having trouble finding the right images to pursue for that.” While the magnitude of that event goes without saying, there are other, less intense, moments that still warrant the perfect representation and have left Lundgren wondering. “The birth of the PoBoy could be a very visually interesting subject matter,” he says, with a pontificating look and some mischief in his eyes.

Choosing the subjects of his pieces is an integral part of the creation since each work requires an intense amount of time, strength, and dedication. Most of his pieces require around 10 to 12 hours to complete, with the most intricate of the bunch hitting around 30 hours of dedication. On top of that, it is creation that requires a large amount of focus and agility. “This is pretty labor-intensive art,” Lundgren says. “For those with carpel tunnel syndrome, this is not that art for you. It’s a lot of pressure on your hands, and it’s very detailed oriented. You have to be willing to stare at your work for long periods of time.”

And does he ever make a mistake and have to scrap an entire piece? 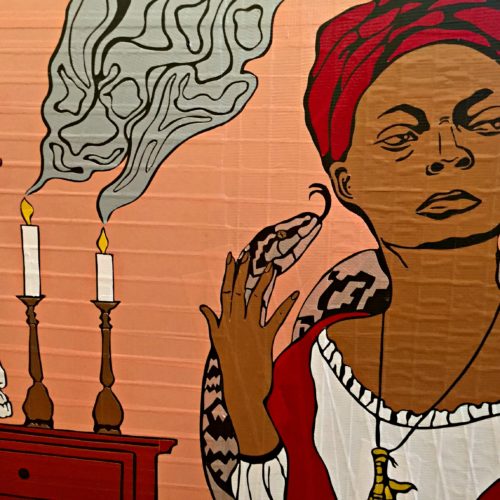 Pieces for Justin Lundgren’s newest exhibit for the tricentennial. (Photo by: Kelley Crawford) 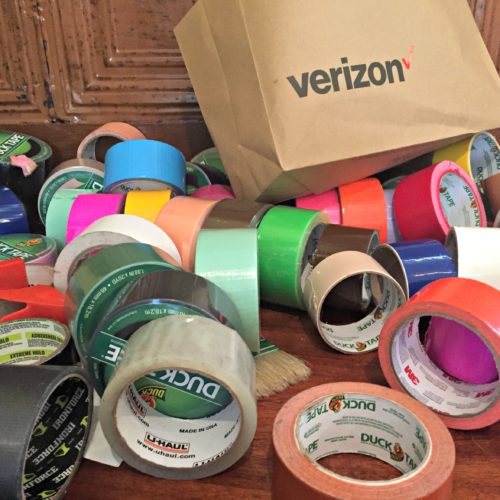 The rolls of duct tape all readying themselves for use. (Photo by: Kelley Crawford) 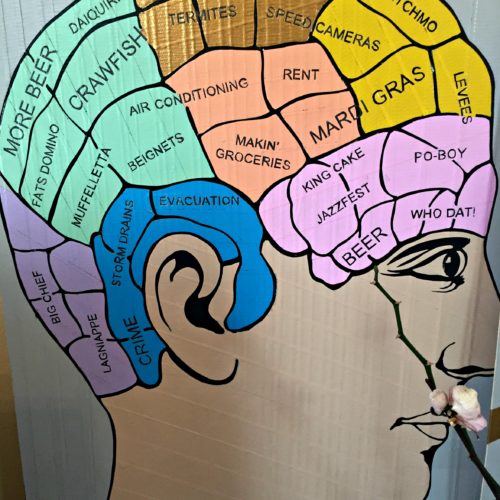 Pieces for Justin Lundgren’s newest exhibit for the tricentennial. (Photo by: Kelley Crawford)

“It happens so many times,” he says emphatically, “and it’s tragic.” Just imagine putting layers of duct tape on top of layers of duct tape, drawing your image, cutting that image perfectly to peel back the duct tape, revealing the color that lies beneath, and then realizing that you don’t like the colors or the end result at all. “It’s always a big surprise at the end of the project, but you could have possibly invested 12 hours of your time, and you peel back that last layer of duct tape and it looks awful,” Lundgren says. 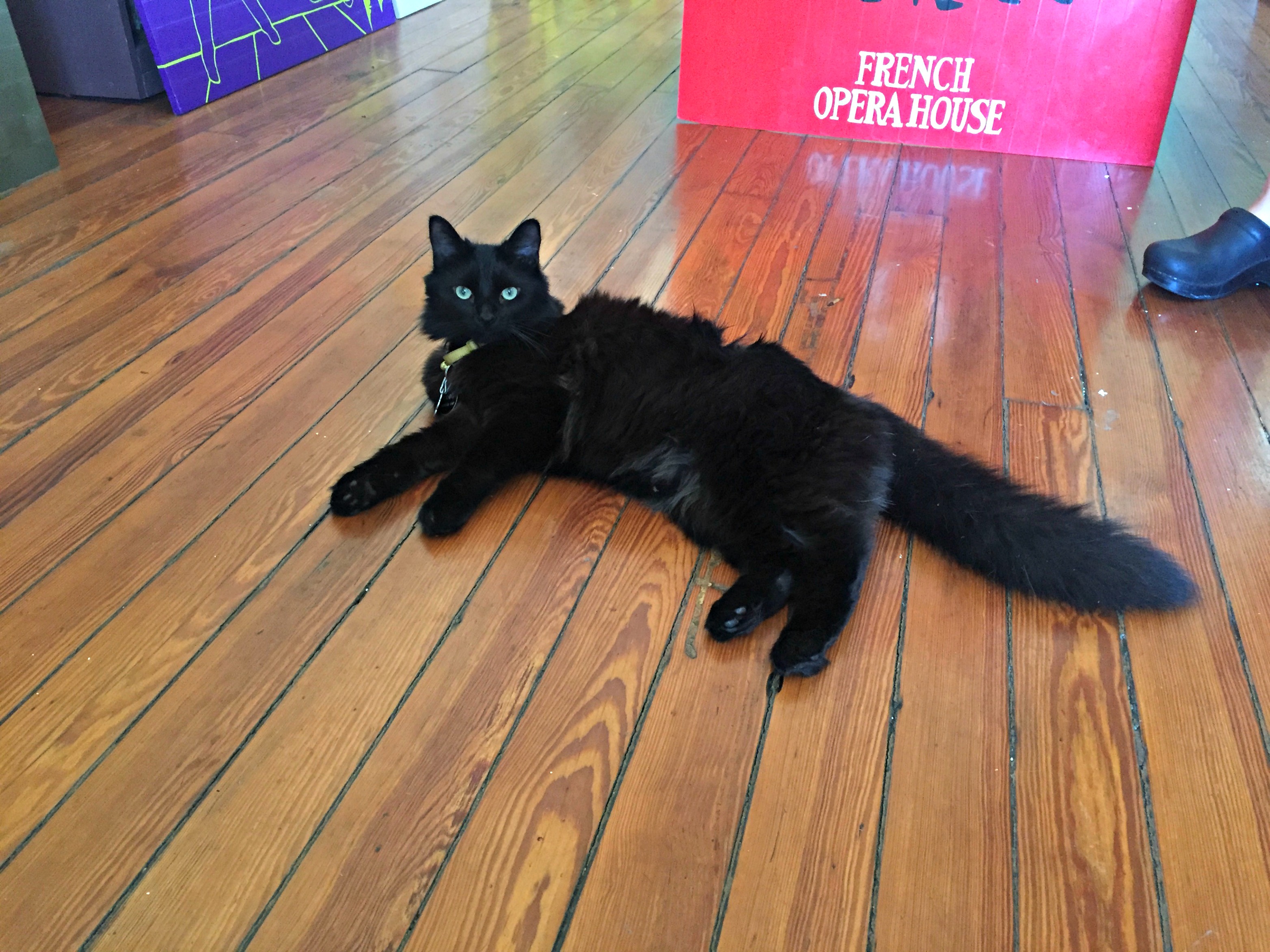 Cody, Justin’s cat that is always part of the art action. (Photo by: Kelley Crawford)

Yet, he finds the work therapeutic. In fact, he doesn’t feel like he could dedicate so much time and energy to the art if it wasn’t therapeutic. With his day job being that of a physician he says that these two entities actually have a commonality. His pieces are about storytelling and “Part of being a good physician is listening to people, hearing their stories, and then trying to find a direction of treatment based off of that. You have to have empathy to do it well.”

And Lundgren does so well with his art that his inquisitive and social cat Cody –a rescue with piercing eyes and covered in black, fluffy fur — likes to take part in the action. “Cody will jump right on the piece of art and he’ll start walking on it. He’s never destroyed any of the pieces. He’ll scratch at the sofa rather than the art.”

Those pieces, sans any cat scratches, will be up at Reynolds Ryan Gallery starting Thursday, August 23. For more information about Justin and his work, you can visit his website.

Conversations with artists: James Michalopoulos and the artist’s eye
Artists