Hello New Orleans, I love you. From ViaNolaVie’s summer intern

I missed you. So much so that I think the strange, crushing pressure in my throat as I came off the 10 onto South Claiborne wasn’t actually pressure at all, but a release of it. By the time I passed Jazz Daiquiris, which I’ve never actually been to but loved seeing every time I drove by during my stay last summer, I was absolutely brimming with joy. 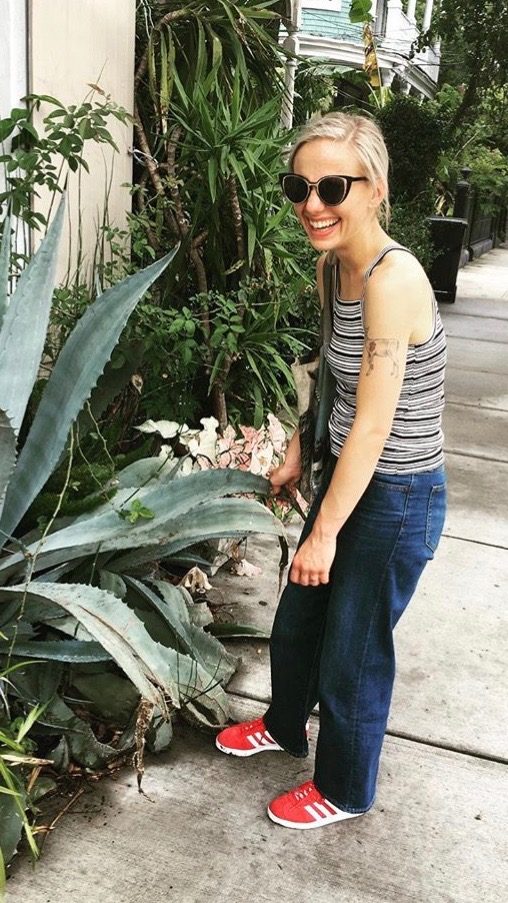 It’s me, just having a laugh with some aloe!

Jazz Daiquiris at night is loud, like everybody knows one another, with music from cars kept running and conversation sparking off people like bits of flint.

Anyway, I’m not writing about Jazz Daiquiris per se. Or about jazz, or daiquiris. (Although jazz does permeate most everything here, as do recipes for things like daiquiris or gumbo, as well as  passed-down rituals like second lines that aren’t called recipes, but, if you break them down, are a mix of elements combined in a certain order in a certain way, right?) Nope, I’m writing to introduce myself.

And I hope I haven’t already done in my introduction what I really wish not to do, ever: That is, frame this city as some exotic place where I am outsider–the city and its inhabitants existing only to engage my creative whims. I read about that idea this morning, in an Al Jazeera article about 2014’s infamous “Kalegate”:

“They [New Orleanians] say that with each new transplant to the city, and each new article about the city’s hipness, its true identity and real issues are swept under the rug in favor of talk of what Loyola University professor C.W. Cannon calls ‘New Orleans exceptionalism’ — the idea that New Orleans is somehow more mystical and primitive than the rest of the U.S. […] the city has a long history of being misperceived as simultaneously an uncultured wasteland and a paradise for creative types who can exploit its sense of otherness for their own gain.”

See, part of the reason why I love New Orleans is its difference from everywhere I’ve lived, and every group of people I’ve ever lived with. Right, I should tell you what those places are: I was born in Maryland, spent most of my late teens and twenties in Massachusetts (mostly around Boston), moved for six months to Portland, Oregon (more about that in a minute), and went back to western Massachusetts to finally finish my undergrad (my last semester is in the fall; I’m 31). I first visited New Orleans on a scholarship in January 2017 (shout out to the New Orleans Center for the Gulf South!), then for the internship at WWOZ last summer (holla to OZ!), and now here, at ViaNolaVie (HELLO!).

For me, it isn’t the “authenticity” of New Orleans that grabbed my heart the moment I arrived and keeps it, brightly beating, gripped in a palm. I don’t share the sentiment of the person quoted in the New York Times article as saying: “so many of the cool places here are really rundown […] and not because a stylist designed them that way.” The difference is that I don’t really think in terms of cool and uncool, and I don’t feel like New Orleans, on its own, thinks that way very much either. Not because it can’t, or because it’s “uncultured,” but because it doesn’t want to. An either/or framework is reductive and too limiting. (And part of acknowledging this means acknowledging that I could be wrong, or only partially right.)

So here it is: I’m apprehensive about some of the things I’ve started to see in some neighborhoods on my visits here–things that look a whole lot like Boston and Portland. St. Roch Market and condo construction sites in the middle of Bywater. The Uber offices next to technicolor buildings in the Seventh Ward. It’s a gentrification that looks the same in several places I’ve visited recently, like Philadelphia and Taos, New Mexico. I can’t not notice the similarities.

But when there’s so much attention on the changes happening in some places in New Orleans, less is paid to the things that haven’t changed but could, in ways that would be beneficial to the people who’ve lived here their whole lives. Those things are reducible—often to policy and money. I hope to write about this in the future, but first I need to meet more people, to be here longer. Thankfully, I have the chance to do some of that this summer at ViaNolaVie. To get to know the people of this city more, I’m going to write snapshots of neighborhoods through interviews with women who work in those neighborhoods.

This is all to say to you, New Orleans, that I do not have selective hearing or selective tastes. If it’s alright, I’d like to get to know all of you: the changed and the same, the music and the silence, and everything in between. The mix is integral to what makes you, you. It’s part of the recipe.

With love and respect,

PS: Do you, dear reader, have any advice for a relative newcomer writer to New Orleans? What about your neighborhood—do you know any women business owners/managers/workers who would want to be interviewed? Email me at nora.daniels@gmail.com. I’d love to hear from you.

PPS: I adore details—those snippets that makes a person come alive on a page, so it’s only fair that I share some about me with you. Don’t you think that sometimes what a person does tells more about them than what they say?

The Spirit Catches You and You Fall Down, by Anne Fadiman

A quick note about this fabulous book: it’s a beautifully written and meticulously researched account of a Hmong family and the American doctors treating their daughter’s severe epilepsy. The story is an important examination about cultural difference, Western conceptions of right and wrong, and the Hmong peoples more generally.

What Would the World Be Without Women: Stories from the 9th Ward, by Waukesha Jackson (published by the Neighborhood Story Project)

What I’m doing this weekend:

Stopping by WWOZ to help out my friend Jennifer during her show, Midnight Cap, 12-3a Friday night/Saturday morning (tune in!), going to the Saturday’s Cardio Box class at the New Orleans Boxing Club in Mid-City (more on the boxing to come—in short, it’s great!), eating lots and lots, and checking out N.O.B.A.B.E., an all-women musicians showcase, at Preservation Hall on Sunday afternoon.

What I last listened to:

WWOZ, on the way to the Broadmoor library. Before that, the podcast Pod Save America.

What I last watched:

The Great British Baking Show, because I’m addicted. A few nights ago I watched a fascinating documentary called My Brooklyn, which tracks the gentrification of Fulton Mall, a commercial area which once served as a busy marketplace and social center for Brooklyn’s diverse population and was eventually taken over by greedy developers and chain brands. It’s really good.

What I last ate:

Avocado and basil on rice cakes, whole carrots with spicy hummus, an apple. This is incredibly boring, but I’m on a budget and my stomach turned sensitive prematurely, at the ripe old age of 21. I know! New Orleans food and my weak digestive constitution don’t square. I hope to make up for it in other ways, like sharing with you all the conversations I hope to have with some fascinating women. And being incredibly loud in places where it’s less socially acceptable, like fancy restaurants and museums, which just comes naturally.

Five things I’d want if I were stuck on a desert island:

Nicotine gum (I used it to quit smoking a year and a half ago and now I’m literally addicted.)

My mother (She’s more like my best friend; needless to say, this comes with its own complications.)

My sister (She lives in North Carolina and is a BOSS. She’d probably do the hunting-gathering or whatever.)

I don’t drink (addicted). Look out for some hot takes on being a sober young (ish) person in the place where folks drink at funerals! HOT!

Personal Narrative and Humor for ViaNolaVie – Nora Daniels
Recent Posts on ViaNolaVie
Donate to ViaNolaVie!     GIVE BACK TO THE NEW ORLEANS PUBLICATION THAT’S ALWAYS GIVING!  ViaNolaVie,...