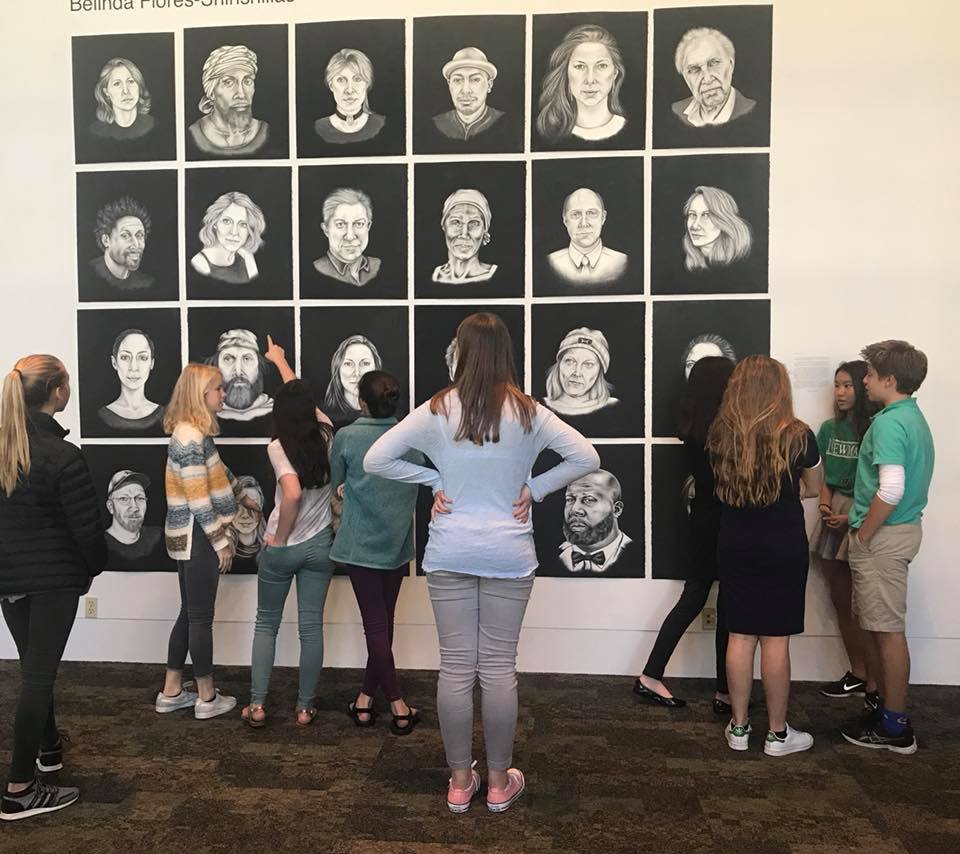 With large windows framing the life of the passerbys and giant white walls begging to be filled, the Mexican Cultural Institute of New Orleans has found a permanent home. On April 21, the MCI had its inauguration ceremony which included the presence of the Ambassador of Mexico to the United States, Gerónimo Gutiérrez Fernández; the Consul of Mexico, Carlos Ponce; and President of the New Orleans Hispanic Heritage Foundation , Ileana Suquet. Although the ribbon cutting happened on April 21 of 2018, the MCI has been present and booming in New Orleans for many years, five to be exact.

Their continuous exhibiting and promoting of Mexican artists and Art and Latin-American artists as well, the Ministry of Foreign Affairs of Mexico appointed the Consulate in New Orleans with a Mexican Cultural Institute, recognizing the friendship and importance of New Orleans for Mexico. The primary objective of the Mexican Cultural Institute is to, “promote the image of Mexico through the diffusion of the Culture and Art of our country in its broadest sense, and to become a benchmark for Mexico in the cities where it is located,” says MCI director Lorena Salzar.

And a benchmark it has become. 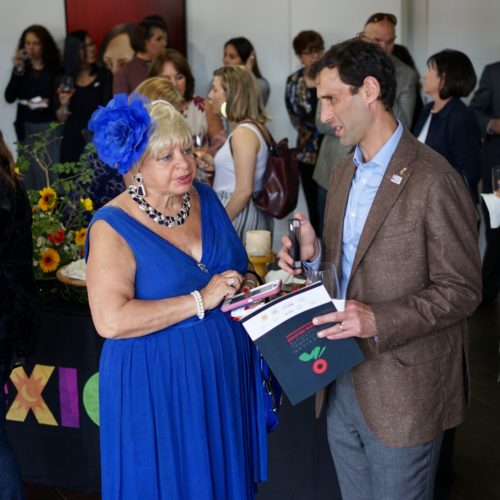 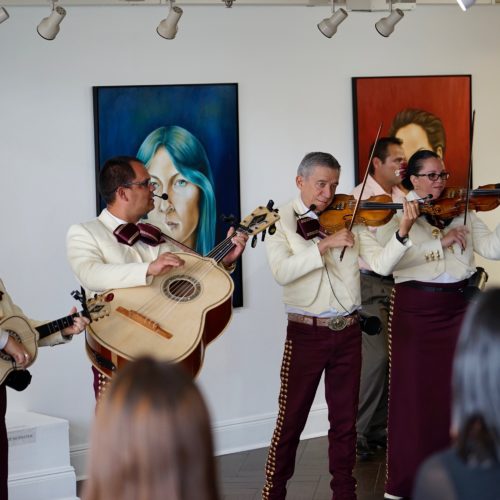 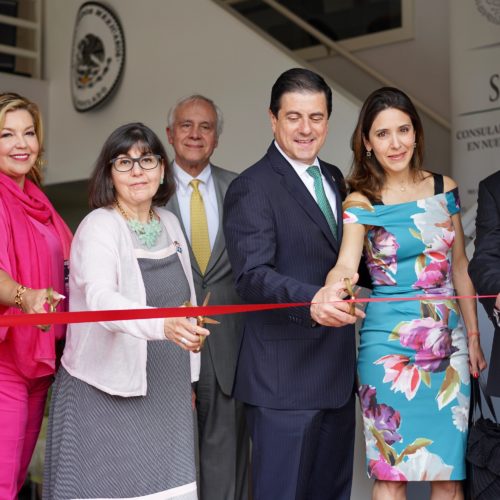 Artists like Hugo Crosthwaite, Piki Mendizabal, Belinda Flores-Shinshillas and Carmen Mariscal have and will adorn the MCI’s walls and the MCI’s community partners range from The Arts Council of New Orleans and New Orleans Film Festival to the Jonathan Ferrara Gallery. Their upcoming exhibit “Impressions by New Perspective,” which opens on May 17, 2018, is a testament to the community involvement and collaboration the MCI upholds and lives by. They started working with Isidore Newman School and the New Orleans Hispanic Heritage Foundation last year by showcasing five Latin-American artists and having students respond to the work. The students then create their own individual pieces inspired by the Latin-American artists. All of these works will be on display for the “Impressions by New Perspective” exhibit.

One of the integral aspects of these educational outreach programs and community partnerships not only occurring but thriving in New Orleans has to do with the vision and perseverance of artist Belinda Flores-Shinshillas. Her exhibit “Decoding the Purity of an Icon,” which just closed on May 14, 2018, explores the icons of religious figures, especially in regard to women. 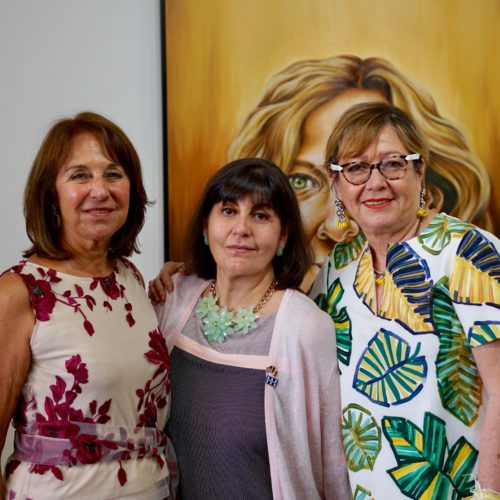 Belinda Flores-Shinshillas (center) and friends in front of one of her pieces for “Decoding the Purity of an Icon” at the Inauguration Ceremony for the Mexican Cultural Institute on April 21, 2018 (photos by: Michael Alford)

As Flores-Shinshillas explains, “After doing research about this subject I thought how unsettling [it] is now to think about how the religious culture constructed icons of strong women that were represented as an inspiration but undermined with profound feminine prejudice at the same time.” Her goal for the exhibit was to, “…find a way of make the most intimate feelings of a woman’s soul emerge and transfer them to the viewer while venerating the embedded beauty in their own nature,” Flores-Shinshillas says. This keen analytical and artistic eye is what Flores-Shinshillas brings to every community and educational collaboration the MCI has with other institutions and individuals.

Even more telling is how much she and all the people who work at and for the MCI believe in New Orleans as their home. With their gallery being located at 901 Convention Center Boulevard, they are close to the arts district on Julia Street, but not directly on that strip. The life of an ambassador is transitory so while Lorena Salzar is director of the MCI this year, she will have to move on. But, Belinda Flores-Shinshillas is here to stay. As she says, “I feel like I belong here even if I wasn’t born here. And I belong here because the culture embraced me, and I embrace the culture of New Orleans. That is what we want to do at the Mexican Cultural Institute…that gallery, those walls that are full of emotions, memories, and everything an artist can bring belongs here, and is here to stay.”

With films, music, exhibits, community partnerships, and a dedication to education surrounding their desire to bring Mexican artists and Art and Latin-American artists to New Orleans, we are glad they have chosen this city as their home.

The opening reception for “Impressions by New Perspectives: Works of Newman Students Inspired by Latin American Art” will be on Thursday, May 17 at 5:30 PM. To learn more about upcoming exhibits, such as the exhibition of photographs of the life of Mexican artists Frida Kahlo and Diego Rivera and the work of five female Mexican and Latin-American artist that talks about gender equality and the empowerment of women through Art, you can visit the MCI’s website.

[…] What: The Mexican Cultural Institute […]

Carmen Mariscal’s exhibition ‘Be Pretty and Shut Up’ featured at the Mexican Cultural Institute of New Orleans – Via Nola Vie
Recent Posts on ViaNolaVie
Become a ViaNolaVie Patron!     Your donation supports the work of ViaNolaVie to: Provide a platform...

Artists in their own words: Carmen Mariscal
Artists

A Museum of One’s Own: Momma Tried Magazine
Art and media