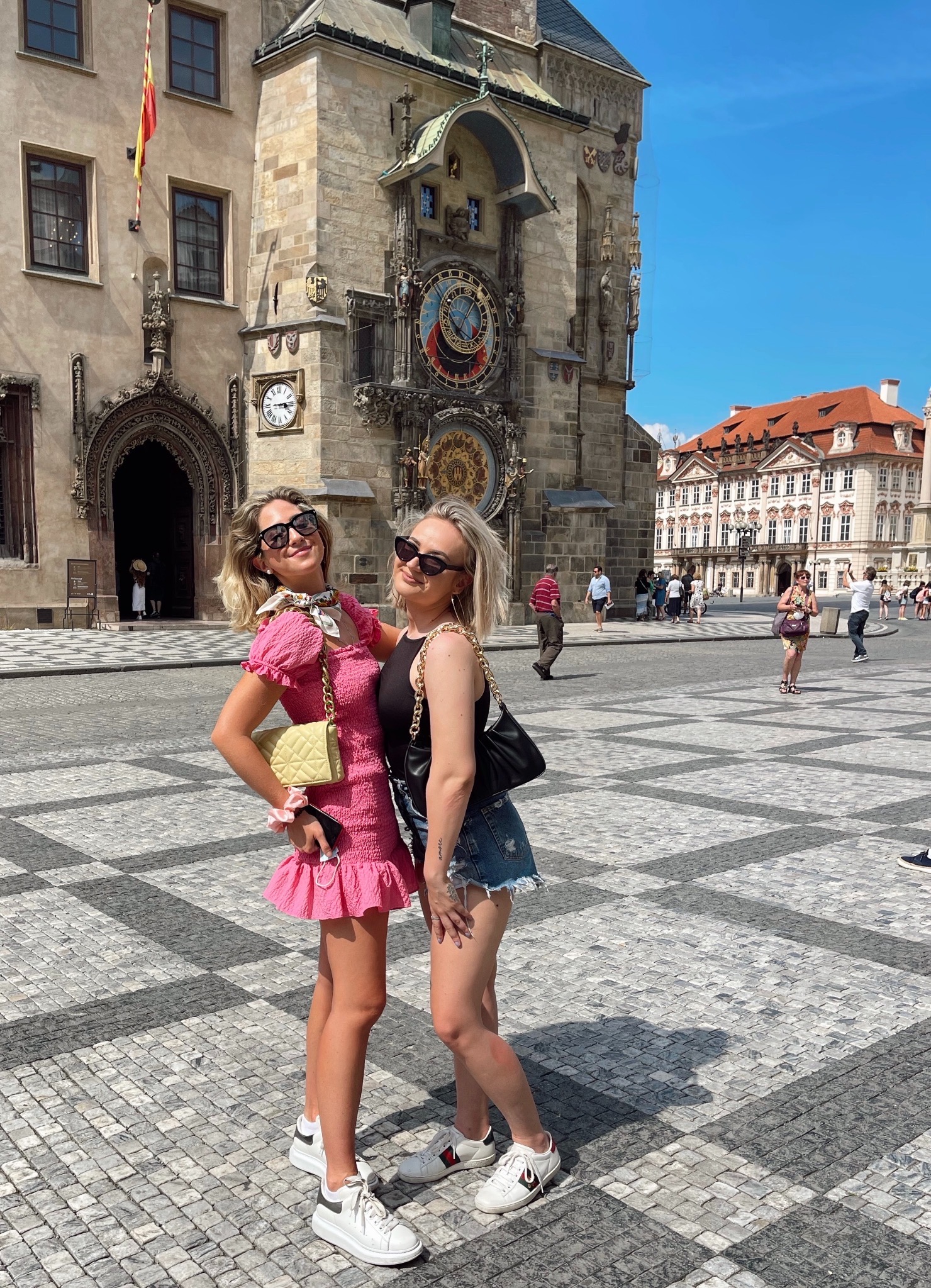 Eladia Michaels (on the left) and Aneta Mihelova (on the right) at the clock tower in Prague, Czech Republic

“Ahoj, jak se más” used to cause shivers down my spine. This sentence translates to “Hello, how are you” in Czech. Being embarrassed to speak fluent Czech haunted me throughout my childhood.

I am a dual citizen, carrying both a Czech and American passport. I have traveled to the Czech Republic throughout the entirety of my life. Therefore, I speak Czech just as well as English; the kicker is, I wasn’t able to say that with pride for my whole life.

I blame this solely on where I was born and raised. I am from Boca Raton, Florida. Some may know this town as the “Boca bubble” filled with “Boca Brats” or “Botox in Boca.” In Spanish, the meaning of Boca Raton means the mouth of a rat. The name originated from the earliest inhabitants of the Glades and served as a navigational term. The “Boca Ratones” were perceived as a  rough and ragged land. Modern-day city residents have been embroiled in scandals, gossip, dark secrets, and false realities. Inhabitants of neighboring cities enjoy making fun of Boca Raton, an area that comes with clear stereotypes.

Speaking Czech was just second nature to me from birth until fourth grade. It was solely a form of communicating with my grandparents, aunts, uncles, and cousins. It was a form of getting around the Czech Republic. It was a piece of my identity.

The older I got, the more I disliked visiting the Czech Republic. In 1993, Czechoslovakia broke apart and became  Slovakia and the Czech Republic. This separation happened after communism was overthrown. Even though the Czech Republic is no longer a communist country, the communist attitude and mindset still prevail. My mom has told me multiple stories about her childhood and upbringing. My grandparents usually walloped her with a belt whenever she did anything slightly unjust or not to their liking. The post-communistic mindset had many problems, according to the late Czech writer Jindrich Fibich: “On a personal spiritual level, behind the facade of a free search for the global meaning of life, we often come across the old fragmentary reality of the atheist dogma, general demoralization, and chameleon-type value balancing of the post-communist variant of post-modernism.” In other words, the  post-communist shift doesn’t just happen overnight.

My mother’s experiences at the grocery stores were nothing like the effervescent experience we have today, choosing between almond or oat milk and perusing the laden corridors of our local Whole Foods. Instead, things were not readily available. Mercifully, she made a friend in the store who would give her items under the counter when nobody was watching. When purchasing linens and decorative objects, all the designs were similar. There was little to no variety of style, which externally symbolized that all comrades were the same. Tropical fruit was only obtainable during Christmas; it was considered a delicacy. If a grocery store ran out of a staple item, like flour, it would take a week or two for it to be restocked.

This is no longer the case in the Czech Republic, but the mindset remains. I have always struggled to have a positive relationship with my grandparents due to our incompatible attitudes. It frustrates me when I visit my mom’s side of the family, and I have no control or freedom to say what I believe, eat what I want, or explore places of my interests. It’s quiet in their house; it feels cold in the beating sun. But that is who my grandparents are; they don’t know any better. That is their place of origin. Just like I was stuck in my “Boca Bubble,” they, too, were stuck in this bubble of close-mindedness and scarcity.

After I entered the fourth grade, I began to understand social groups, being “cool,” and cliques. This period is where it started to go south for me. Once the reality of these social norms set in, I suddenly viewed speaking Czech as a sin. It was disgusting to me, an embarrassment, and in my mind, it became the biggest flaw in my identity.

It was as if this “sin” followed me from the Czech Republic to Florida. My mom’s friend group was made up of Czech women. Whenever she had them over, I refused to greet them. I refused to speak Czech to them. I refused to treat them with respect. They reminded me I was Czech, and because of that, I wanted nothing to do with them.

It is hard to reflect on my past behavior because it makes me sad for my young self and my mother. I should have been proud of my ethnicity and roots, my family history, and the struggle my mom survived as a child. I was living in this unrealistic “Boca Bubble,” in which I thought materialistic things were the only things that mattered. Boca was the antithesis of my grandparents’ Czechness, and this identity made me different. I cared about myself and didn’t think twice about others around me. I was forcing myself to be someone I, by birthright, wasn’t.

There was one moment I will remember for the rest of my life that changed my whole perspective. I was a freshman in high school, and the school day had just ended. My mother came to pick me up. Once I got in the car, I noticed she was on the phone with a Czech friend. Immediately, I activated this “bitch mode” and refused to say hello to my mother or thank her for picking me up.

The tension in the car was more than my mother could take. She ended her call, looked me in the eyes as frustrated tears started to form, and exclaimed, “You don’t have to like who you are. You don’t have to accept yourself for who you are, but you are Czech, which will never change.”

Her words were short and straightforward, but they enlightened me. They enlightened me so much that I became hungry to pop my bubble. I became hungry to shift my mindset, expose myself to more than just the city of Boca Raton. The first step was leaving home. I researched European boarding schools and saw TASIS, The American School in Switzerland.

As a freshman in high school, I was not mentally or emotionally prepared to take a school year abroad. However, the summer program seemed manageable. It was a six-week business school. Classes were in the mornings, and activities such as sailing, rafting, and hiking were offered in the afternoon. I tapped on the “click here to apply” button, wrote my application, and submitted it within the same day. I was accepted to the program a month later.

In June, I stood outside the gates of TASIS, squeezing my dad goodbye before he left to catch his train. Then I was alone. I was incredibly unfamiliar with my surroundings and felt lost. Something clicked in my mind, and I felt sheer panic trickle down my spine. I thought, “So what? Who cares what I do, what I say, and who I am here? I will never see these people again after the six weeks are over.” This was the first moment I began not to care what people thought of me.

After walking around the campus alone, trying to acquaint myself with my so-called “home,” I returned to my room. I opened the door to my randomized roommate, who had just arrived. Her name was Moni Fuster, and she was from Spain. She had a couple of friends doing the program, so she was kind enough to invite me to dinner. I sat at that table with seven strangers, six of whom spoke Spanish.

Should feel offended that the Spanish speakers were not speaking English so that I could understand? But I thought it was cool that people my age gathered at a table and proudly spoke in a native language other than English. Day by day, I adjusted to this new environment, meeting different types of people. I later became friends with a crew of students from Brazil. But still, every moment I spent with them was enigmatic because I couldn’t speak Portuguese.

After the first week, it became apparent that those at The American School didn’t form friend groups based on social status, wearing designer shoes, or who kissed who last Friday. Instead, they formed friend groups were based on language. Everyone was able to speak English. However only about five students, including me, spoke English as their native language. Those who spoke Italian hung with other Italians, the Portuguese-speakers hung out with other Brazilians, and Spanish-speakers hung out with other Spaniards. So, where did that leave me? Alone.

It was hard. I wanted to go home until, a few weeks in, I met Aneta Mihelova. I heard her on the phone asking, “Ahoj, jak se más.” Again, it sent shivers down my spine, but this time I welcomed them. There was someone with whom I shared a common identity. I turned my back and shouted, “Jsem česká!,” which translates to “I am Czech.” It was my first time saying “I am Czech” with the utmost dignity, pride, and excitement.

Still today, I consider Aneta to be one of my great friends. It was the two of us  for the next six weeks. We shared every unfiltered thought and dissolved into hysterics due to jokes and comments uttered in Czech. She made me feel at home. She made me feel connected to my sense of humor. But most importantly, she connected me to me.

Hindsight for foresight insight: The evolution of slavery into the prison system
Uncategorized
A day in the life of Amos: A world without modern technology