Freetown Christiania is located in the Christianshavn area of the capital of Denmark, Copenhagen, consisting of about 85 acres of land. Access into what is known as this “loser’s paradise” is strictly restricted to bus, metro, or bike, as one of the rules within the borders of Christiania is that no cars are allowed within its premises. 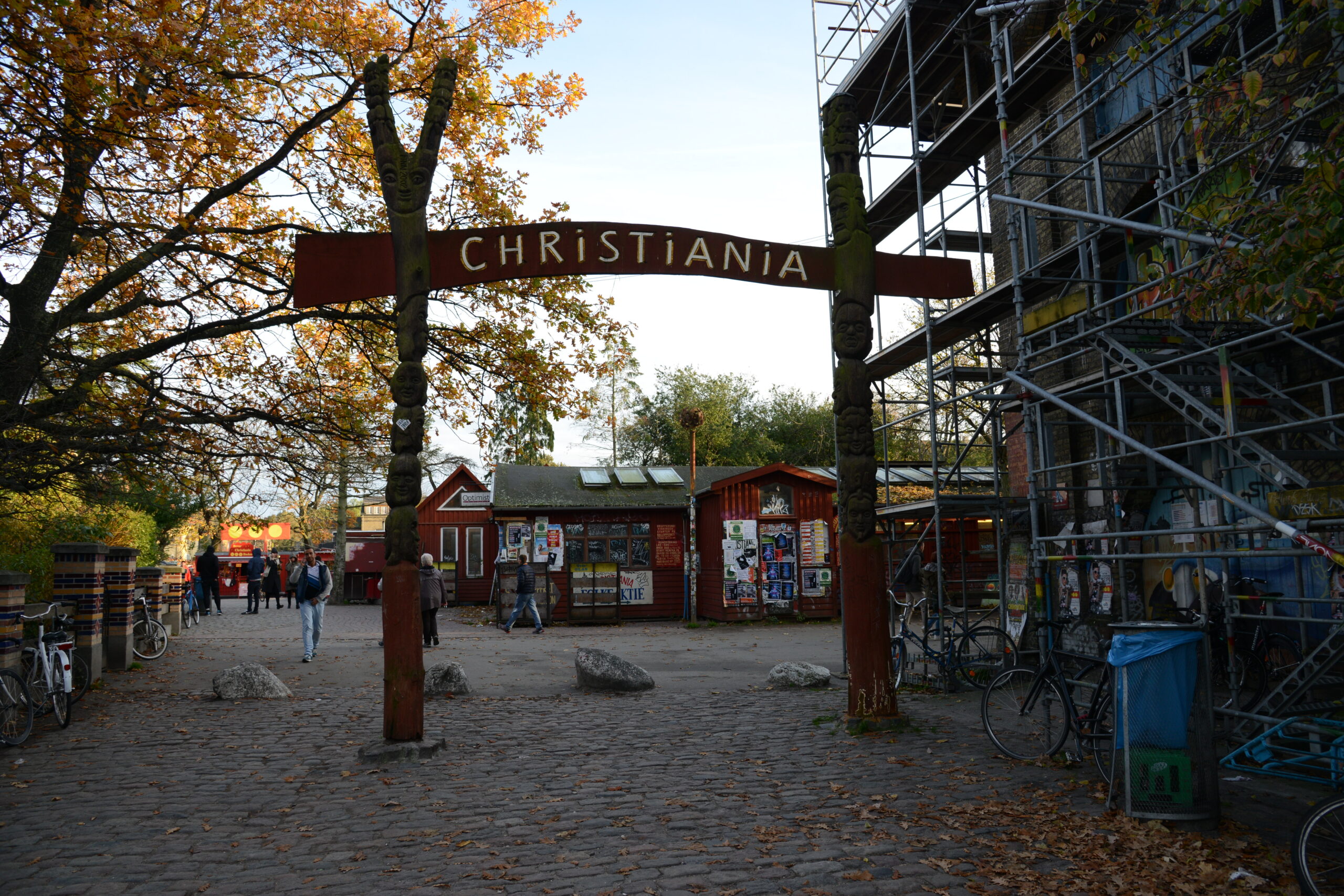 Before Christiania became home to ~900 citizens living in 400 buildings, it was originally a military base abandoned in the late 60s. In 1971, Jacob Ludvigsen proclaimed the land a “free town” as it became illegally inhabited by a group of “hippies,” otherwise seen as squatters, which protesting the lack of inexpensive and suitable housing “formulated a vision for an outsider utopia: they would go on to develop their own rules (consensus democracy being a key tenet), introduce their own currency, and fly their own flag,” as Angela Wang, a journalist who visited Christiania in 2010, says. In 1976, a supreme court ruling sought to evict the squatters from the land; however, the Danish parliament enacted a special law, enabling citizens to inhibit Christiania and deeming the area a social experiment. After nearly four decades and due to social activism, in 2011, Christiania finally reached an agreement with the Danish government and gained a sort of independence, becoming the home of everybody and nobody. 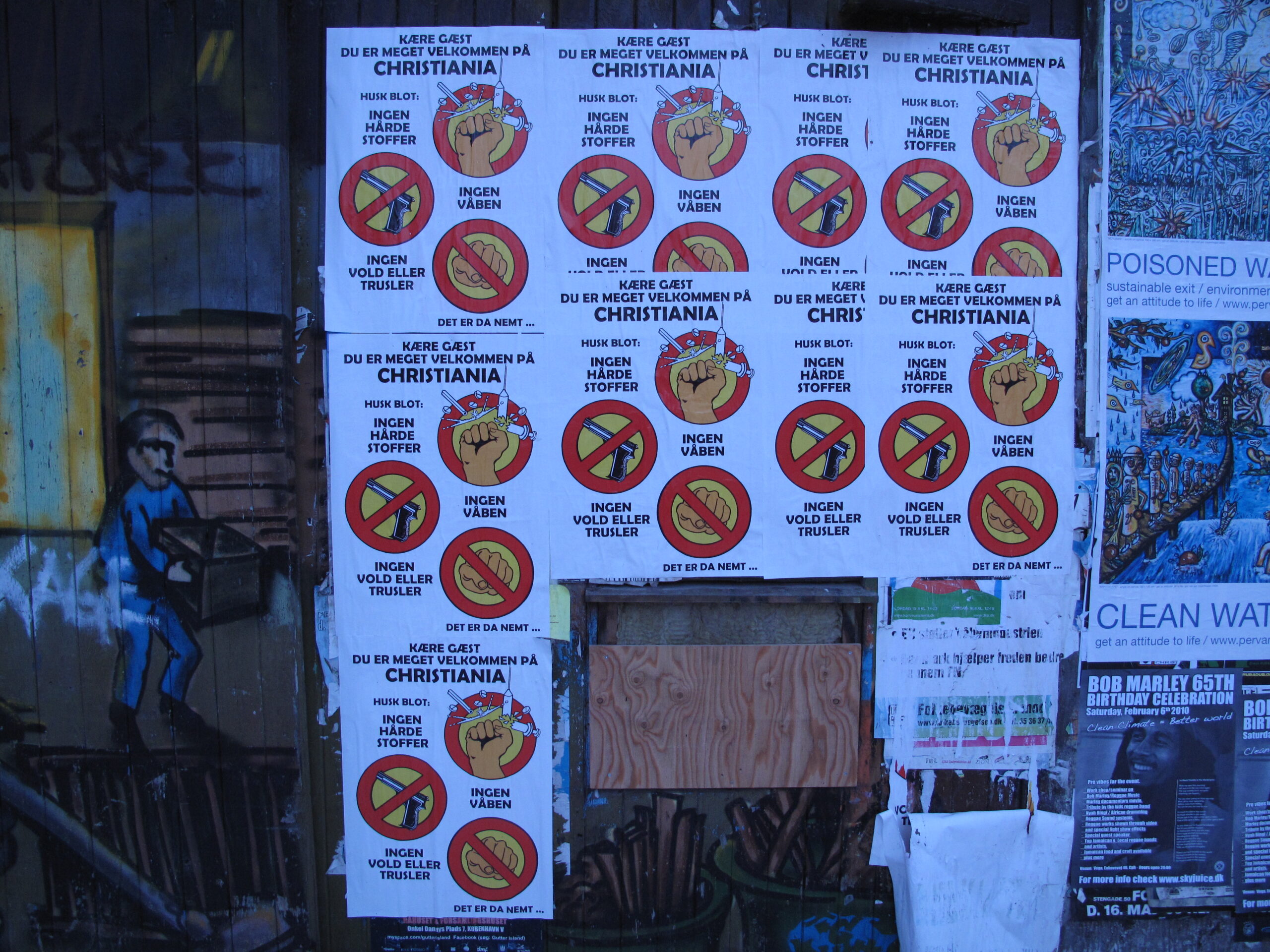 Christiania has rules (Photo by: Wikipedia).

Though there is no government in Christiania, the commune is guided by the self-governing principles of fairness, equality, and a lack of taxes. There are specific rules within the borders of Christiania beyond the banishment of cars. The most important rule is a strict no-violence policy, meaning that there are no guns, knives, hard drugs, or any object/activity that could instigate violence. No one runs within Christiania as running signifies danger and creates panic amongst citizens and visitors. Finally, there are no pictures allowed within its premises due to the large hash market that exists within its borders.

After many years of negotiation, the Danish government declined Christiania’s independence and stated that it would still be ruled by Danish law. However, in 2011, they agreed to allow the land to be legally bought, enabling the creation of the Foundation Freetown Christiania. Having one collective lease over the land, they opposed private ownership and turned to communal ownership. With this agreement, citizens of Christiania promised to police themselves, install their own sewerage infrastructure, a refuse collection and recycling service, childcare facilities, maintenance for their paths and roadways, and ensure that every worker is paid the same. These measures are all taken to stray away from and limit the imposition of Danish federal law as well as to ensure that there are no hierarchies created, no income inequality, or exploitation of citizens. 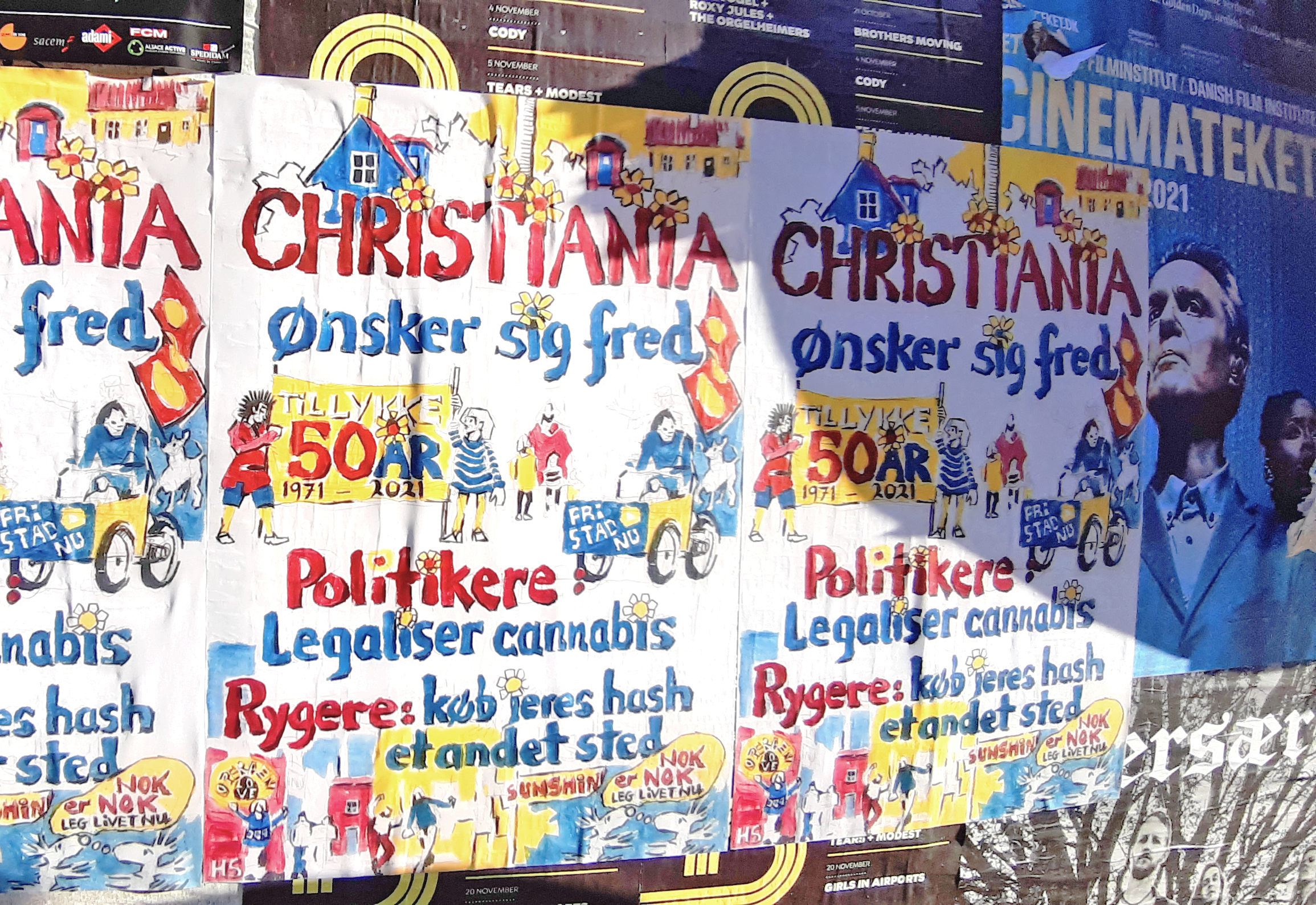 Messages from Christiania (Photo by: Wikipedia).

While citizens do not own land within the commune, but rather share it, businesses can either be run collectively or individually, though no citizen makes more money than the next. Independently run businesses include local shops and cafes and Christiania’s most profitable business: Pusher Street or the Green Light District, an open-air hash market filled with stalls, tables, and vendors all surrounded by some of Christiania’s best street art. The existence of Pusher Street often results in many emergency “Community Meetings” to address the issues between the market and Danish law. Since its beginnings, the collectively run hash market has been an integral and accepted part of Christiania, and it is Denmark’s second-biggest tourist attraction.

The hash market brings a lot of concern to the Danish government, and thus, it gets raided by the police nearly every other day. Possession of marijuana in 2007 entailed a fine of three hundred and eighty euros, and the sale of marijuana was punished through harsher penalties from the law. Though the hash market is widely accepted by Christianites, Danish police raids are fairly common, making Pusher Street a prominent subject of discussion during the commune’s Community meetings. “It’s sad that we use so much time dealing with Pusher Street. I think it could be fun using more time building funny playgrounds, or people’s housing, or Kindergartens,” says Tanja Fox Social activities and community services, on the other hand, are run collectively, following a non-hierarchical business model. Though citizens do not pay rent, they pay for utilities and taxes. The commune funds itself by collecting taxes or fees from locals and businesses, such as cafes, shops, or galleries. Most of these fees go to the “common purse” that funds locally managed activities such as trash collection and recycling, building and renovation, schools, etc. 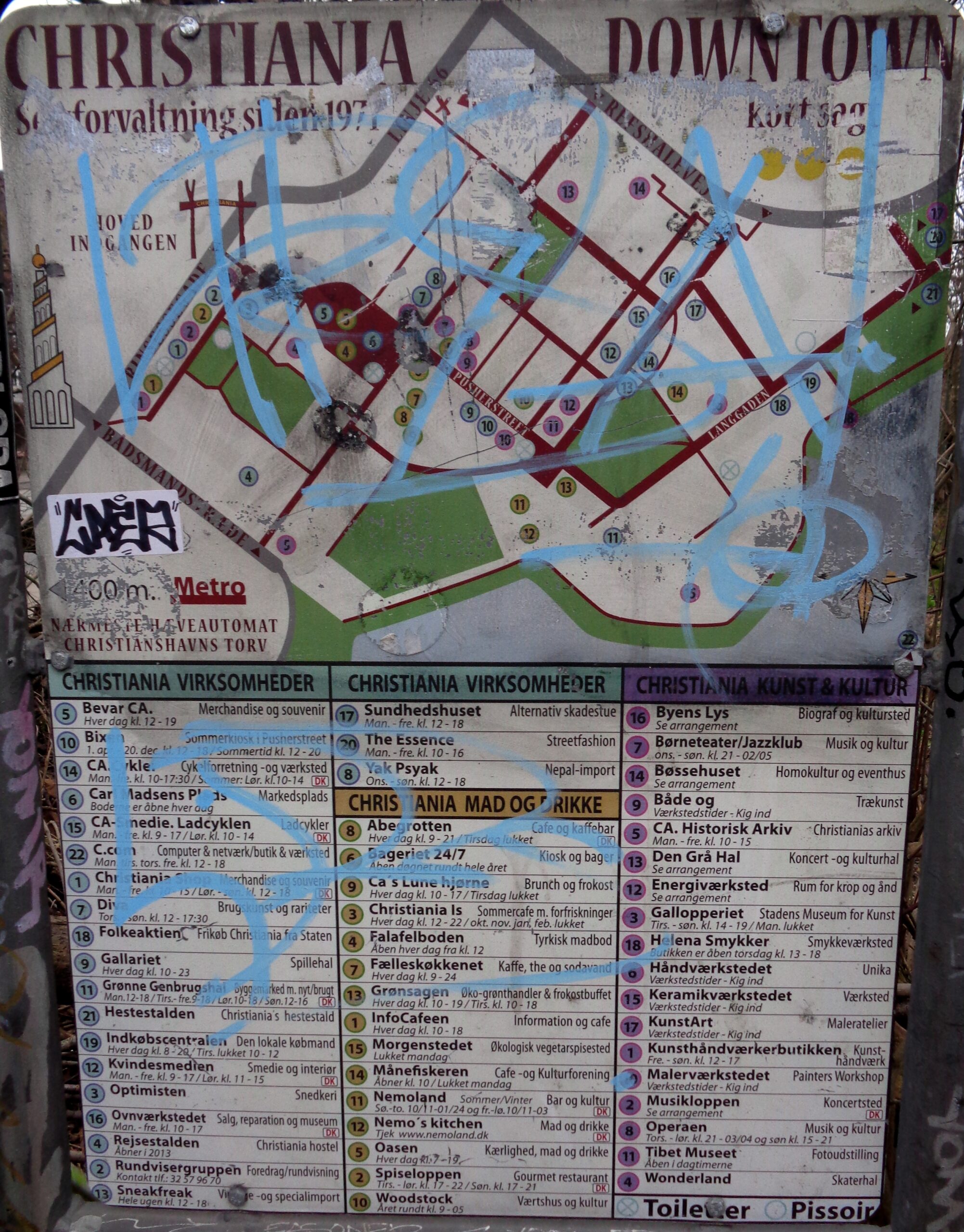 Self-management in Christiania latches on to social activism; every citizen must be willing to uphold the commune’s values and laws. Tanja Fox, spokesperson and life-long resident of the commune, states that becoming a citizen of Christiania means being eager to play an active role in the community, “thinking We instead of I,” and wanting to pursue creative endeavors. Christiania’s citizens, all of varying ages, reside in fourteen different sectors/ neighborhoods, each consisting of cafes, daycares/schools, shops, galleries, and collectively-run businesses; each sector holds a meeting. Each neighborhood is managed collectively through an “Area Meeting” held once a month to allow citizens to propose projects, further development in their proximity, assess issues and concerns within the neighborhood, maintain ecological well-being, and approve new citizens whenever there is a vacancy. Vacancies are announced in “Ugespejlet,” the local commune newspaper, and as many as ~12 applications are received with each vacancy. Applicants often spend years on a waitlist as with each opening, a consensus on who is to move into the neighborhood must be reached amongst members of that given sector. Citizens of the given sector can spend anywhere from 300 to 400 hours deciding what applicant is to fill the vacancy.

Grouping together the more significant concerns and ideas of all the sectors is the “Community Meeting” held to assess and provide an agreed-upon consensus solution to address overall issues and problems. Every citizen is welcome to speak up at these meetings and assert their opinion through voting. The consensus reached, in the end, must be determined collectively, by majority vote, and be widely upheld by the citizens. Significant matters addressed in the “Community Meeting” are those such as citizens wanting to be able to sell the homes and buildings that they have built. However, the initial agreement signed with the Danish government stated that “residents have the right to occupy, but not to buy or sell their homes or businesses.” Thus, the consensus was to deny the citizens’ request. All managerial issues in Christiania are discussed in different meetings such as the treasure meeting, business meeting, building meeting, associate’s meeting, etc. 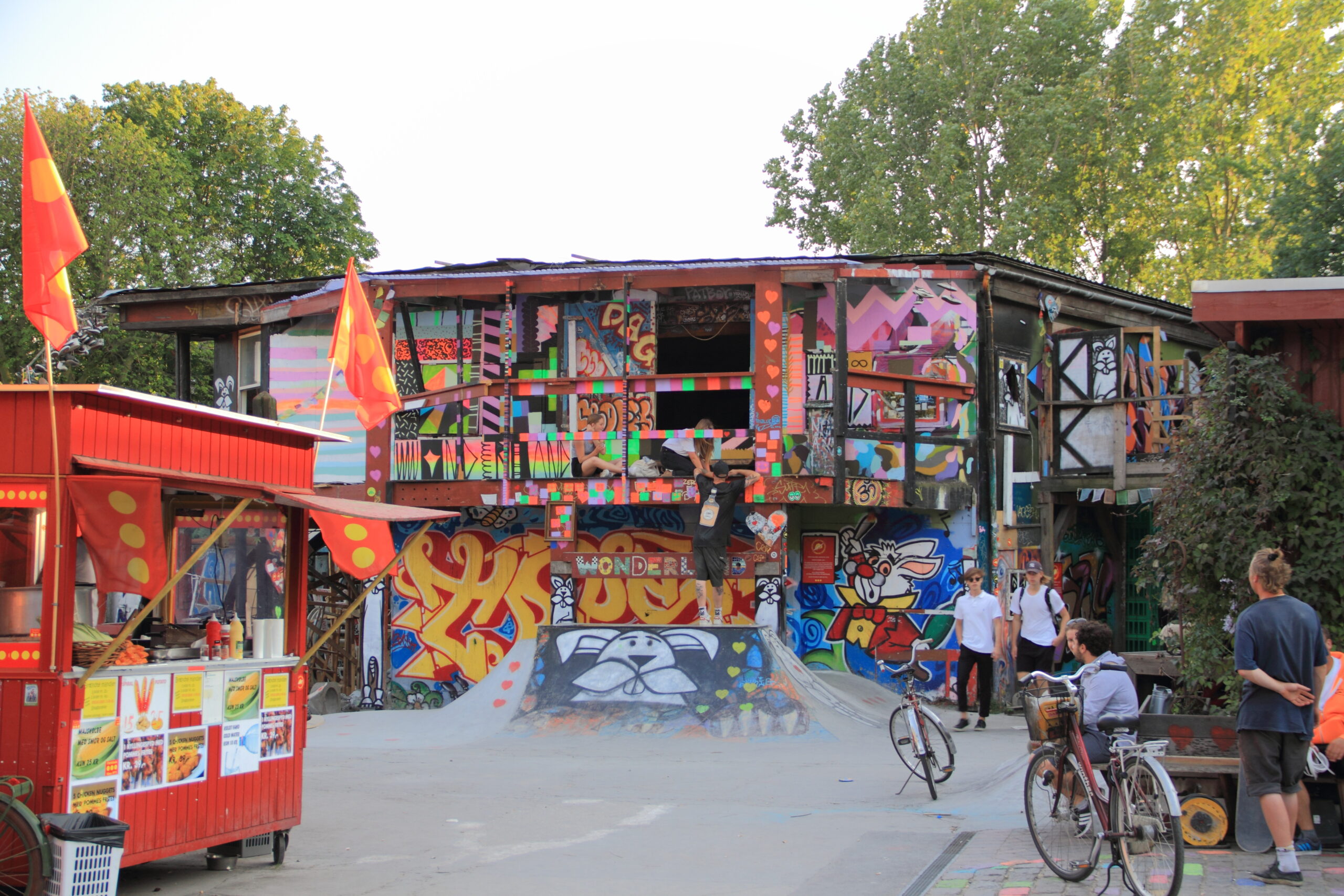 A large welcoming sign at the entrance of the “Green Light District,” otherwise known as Pusher Street, reads, “Dear friends, there are three rules in the Green Light District: Have Fun, Don’t Run – it causes panic, and No Photos – Buying and selling hash is still illegal.” These rules are not exclusive to Pusher Street but are upheld as laws throughout Christiania. In 2003, Pusher street was recorded to sell two-thirds of the total retail sale of Cannabis in Copenhagen, bringing in 85 million dollars to Christiania annually. Beside Pusher Street, also at the ​​commune’s epicenter, is Nemoland, a gathering spot filled with live music and performances, picnic tables, a bar, a restaurant, and a nearby lake. The entire area is filled with young people’s chatter as they smoke, drink, and socialize, enjoying their Pusher Street goodies and being part of what makes Freetown Christiania one of Copenhagen’s biggest tourist attractions.