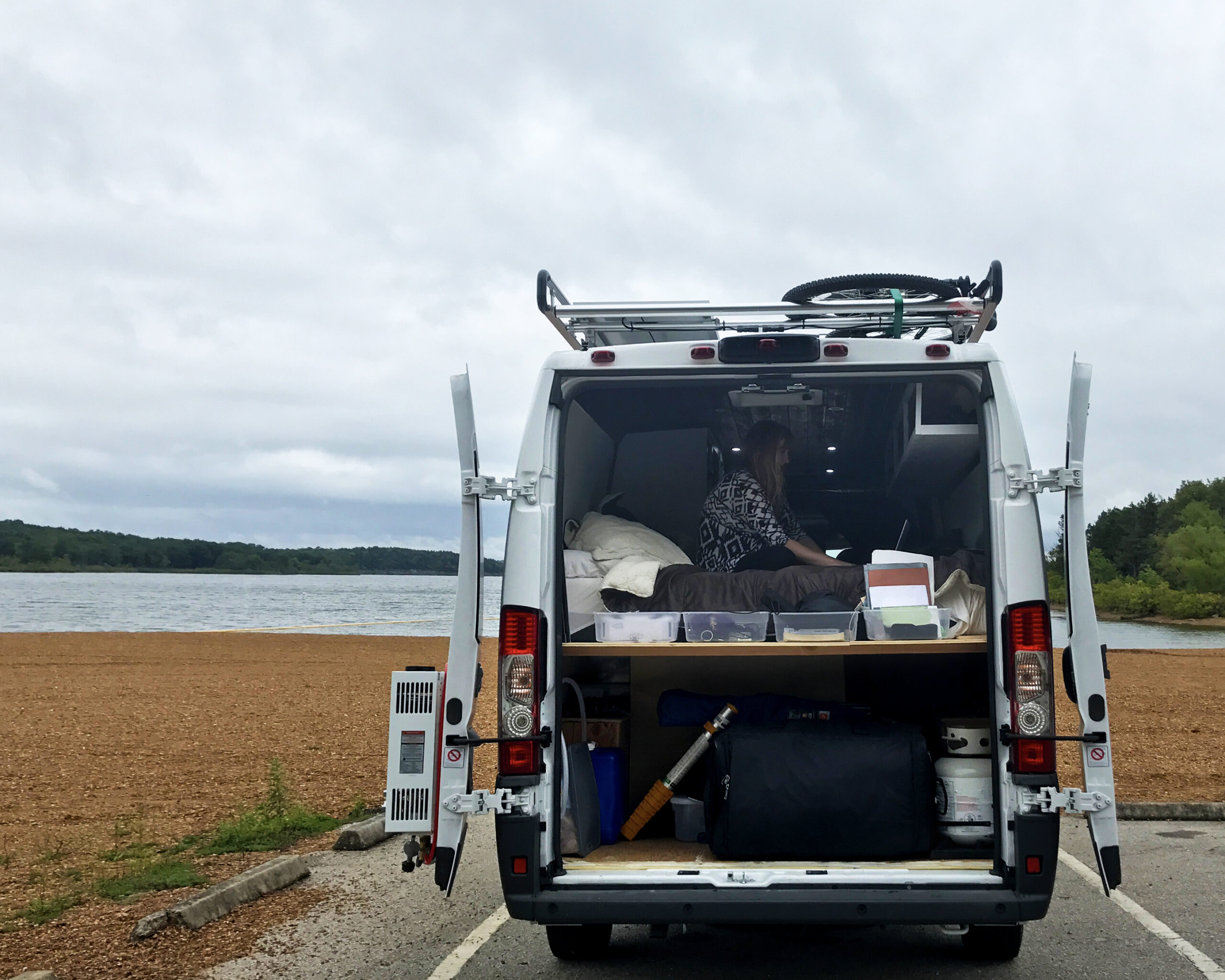 Following a divorce and turning forty, Bob Wells realized he was in a rut. He could continue taking home $400 a month from a job he hated with people he despised and continue to not be happy, or he could make a drastic life change. With impossible finances and the threat of homelessness closing in, he decided to buy a used van with the last $1,000 left in his savings account, threw a sleeping pad in the back, and moved into his van.

When most people hear the words “off-the-grid,” images of log cabins in the deep wilderness come to mind. These off the grid people reject many of the conveniences provided to them by modern society and instead opt to be self sufficient, often producing their own power, food, water, and anything else they may need. This allows people to get back to nature and avoid society, but this lifestyle approach is exclusive and often requires enormous amounts of capital upfront. However, a new type of “off-the-grid” lifestyle is emerging, and whether or not they were forced into it, Bob Wells and thousands of others (the US Census Bureau estimated 140,000 people living in cars in 2019) are finding happiness through “vanlife.” While they might still be reliant on certain services and amenities of modern society, these vanlifers are rejecting being the victims of capitalism and building community and a life on their own terms, effectively leaving the “grid.”

Most van lifers are people like Bob Wells who were increasingly aware they were in an impossible situation financially and took the leap to living in a van full time assisted by this financial situation. The people in this category tend to buy their vans second hand and improvise their appliances and their day-to-day chores. For example, Stef, 29, has no mod cons or running water, and relies on friends for laundry trips. “I’ve got a couple of little camping stoves and little jerrycans full of water and I can make do with that, the van doesn’t have a toilet or a shower so relying on public facilities has been really difficult,” Stef says. “Gyms are closed, so I’ve had to shower at service stations.” Some people have installed custom cabinetry,  insulation, and even solar panels, but it depends on peoples’ situations. Bob Wells is able to work 32 hours a week remotely, some people get by on government assistance, but by living rent-free in their vehicles, these vanlifers are saving their independence, self-sufficiency, and dignity.

However, not all vanlifers are pushed out of traditional housing by not being able to afford it.  “On my Instagram, I will hashtag ‘houseless not homeless’. I would imagine 99% of people who live in vans, if you said you’re homeless, they would say: ‘Go fuck yourself,’” says Jeremy Flynn, age 46. When confronted with being forced to move apartments, Flynn took the first month’s rent and deposit he saved for a new place and instead spent it on an 18 year old Peugeot Boxer commercial van. He has barely traveled from his home of Christchurch in Dorset, England and effectively lives “down the road” from his old apartment. He still has the same job as a personal trainer, the same friends (who don’t understand the change), but no longer feels like a wage slave with anger issues.

Sarah, in the North of England, told government sources “that she had been physically abused and threatened [in her Mother’s house], and that she needed social housing. The council told her she would have to go to the bottom of the list because she had moved from her home area – it would be a three-year wait if she was lucky. She was offered an emergency shelter, which she found incredibly traumatizing.” So instead, she moved into her 14 year old red Ford Transit van and simply had to adapt. Sleepless nights, being forced to move by the police, and the lack of a reliable shower has been hard on her, but Sarah has found a way to be resourceful. A stroke of luck hit when the “father of her friend told her she could park her van on his drive and shower in the house in the morning.” A slight bit of  resourcefulness has allowed Sarah to start applying to jobs and start to get back on her feet. It is this DIY, “figure it out” mentality that unites these specific vanlife community members and gives the community legs.

Despite “off-the-grid” seeming incompatible with community, the international vanlife community espouses a DIY mentality that empowers people to not just survive this lifestyle, but thrive in it. For instance, Wells started a website Cheap RV Living in 2005 and shared tips, tricks (“How to wash your hair in the boondocks” and “How to Live on 800$ a month in a van” are among his most popular videos), and his spiritual journey towards becoming a nomad. After the Great Recession when around 10 million Americans lost their homes, views on his site’s videos shot up to 4 million. He organized a meetup for like minded vandwellers, and after 8 years, an estimated 10,000 vehicles rendezvoused in Quartzsite, Arizona. When Wells lost his eldest son in 2011, he experienced suicidal thoughts. “Why am I alive when my son isn’t?” he asked himself obsessively. To push through this devastating loss, he continued to build this community by founding the Home on Wheels Alliance (HOWA) charity. The goal of this charity is to help clients who are facing homelessness receive financial stability and become members of the mobile community. New tires, brake pads, and even one converted school bus are among the things HOWA has been able to donate to people in need.

There is a larger discussion to be had on homelessness and vanlifing shouldn’t be seen as a trendy and hip way to save money or the newest housing fad, but there is tremendous courage and grit displayed by this community. Instead of remaining victims of capitalism and in the same financial cycles, countless people are breaking off of this “cycle” or “grid” and becoming empowered, self-sufficient, and part of a community. While these vanlifers may not be located in the middle of nowhere and still rely on some modern services, they still remain “off-the-grid” by not just falling through the cracks of capitalism and surviving, but by thriving.

Homelessness and sign flying: Why do we group them together?
Social Class