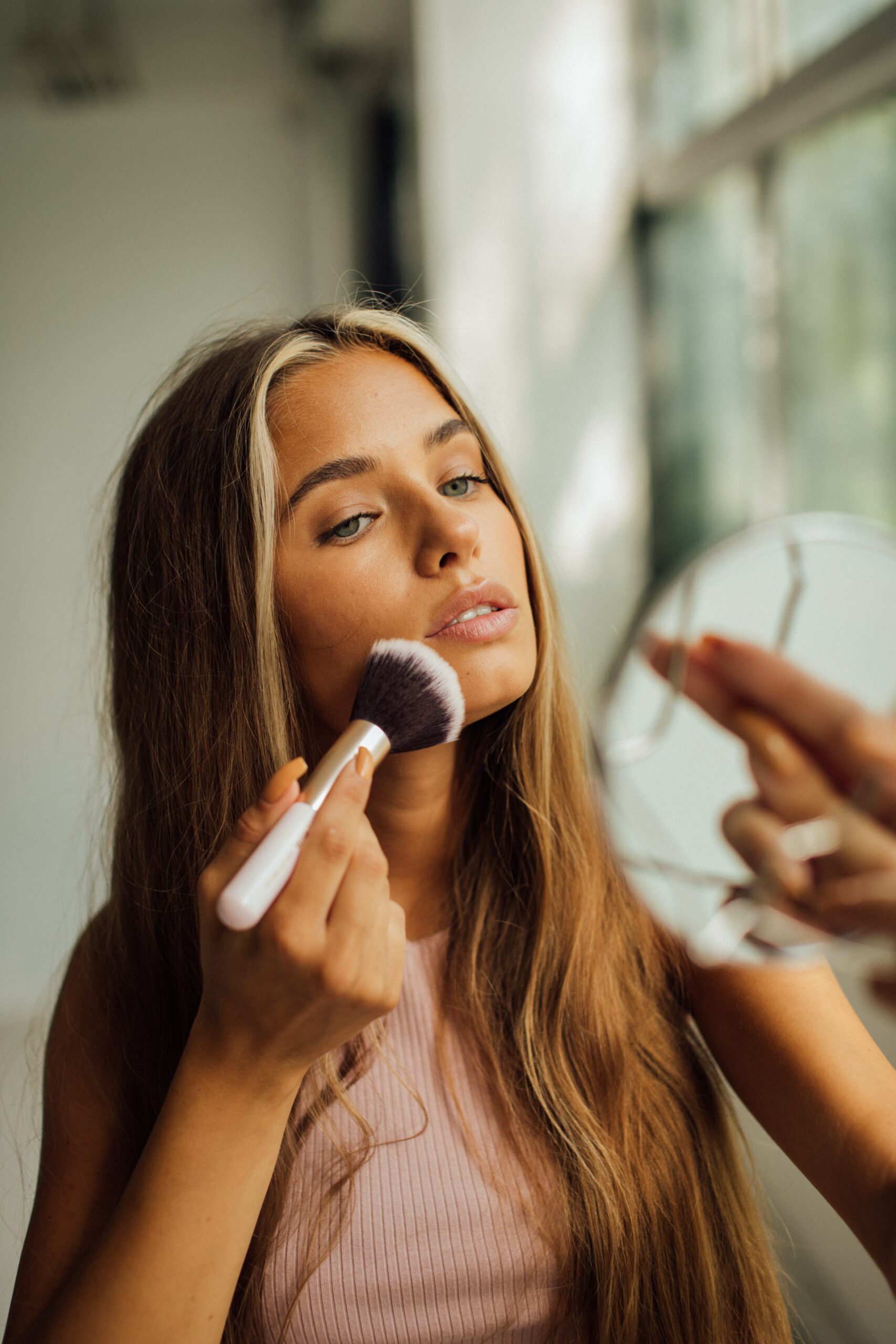 a girl puts on makeup (Photo by KoolShooters, Pexels)

It’s only 7 in the morning, but Reese Grau is wide awake and ready for the next round of sorority recruitment. Her bleach-blonde hair has been straightened and pulled back into a loose ponytail. She’s wearing a full face of makeup: primer, foundation, concealer for blemishes, a bronzer contour, blush, and pink lipstick. The look is completed with a glittery smokey eye and a set of fake eyelashes, which blend seamlessly into her mascara-coated naturals. For her outfit, Reese is wearing a blue square-neck dress from Australian fashion brand Hello Molly, complimented by a pair of beaded butterfly-shaped earrings from an Etsy shop called Jaunty Jem. She’s also wearing a heart shaped pendant, charm bracelet, and coordinating ring from jeweler Tiffany & Co. On her feet, Reese is wearing a pair of white platform sandals from online retailer Lulus. The look is a combination of fast fashion and luxury, one that hopefully aligns with the strict beauty standards of the Alabama Sororities.

In early August of 2021, hundreds of girls just like Reese created videos on social media platform TikTok in order to document their journeys through sorority recruitment at the University of Alabama. It became a viral sensation overnight, with millions of TikTok users becoming invested in the lives of their favorite pledges. Scrolling through #BamaRush, the videos blended into an indistinguishable blur of pastel dresses, Kendra Scott necklaces, and bleached blonde hair. Potential new members spend thousands of dollars on wardrobes, makeup, and accessories in order to present the perfect image of a southern sorority girl. No expenses could be spared; their future social lives depended on it.

In the case of Reese Grau, this dedication seems to have paid off. She received a bid from Phi Mu—a sorority widely recognized as “top tier”. Scrolling through Reese’s TikTok videos, however, her success could be seen as preordained. Beyond her wardrobe choices, Reese is conventionally attractive; she is skinny and white, with Eurocentric features and a ski-slope nose. It is difficult to pick her out of the crowd in Phi Mu’s 2021 pledge class photograph. But what about the girls who don’t look like Reese? TikTok user Kendee, who describes herself as a “queer mixed alternative mentally ill northerner”, recounted her own experience with recruitment. She was dropped from every sorority, which she speculates was due to her physical appearance. Others have shared similar stories of experiencing rejection. In an anonymous exposé published in 2018, the recruitment chair of an unspecified sorority at the University of Michigan revealed the extent to which physical appearance factored into the process.  “1,200 names fall off recruitment profiles and into the Facebook search bar,” she writes, “where we must ask a series of important questions, created by nationals, of her public photos that will determine her “External Prescore” on a scale of 1-10.” 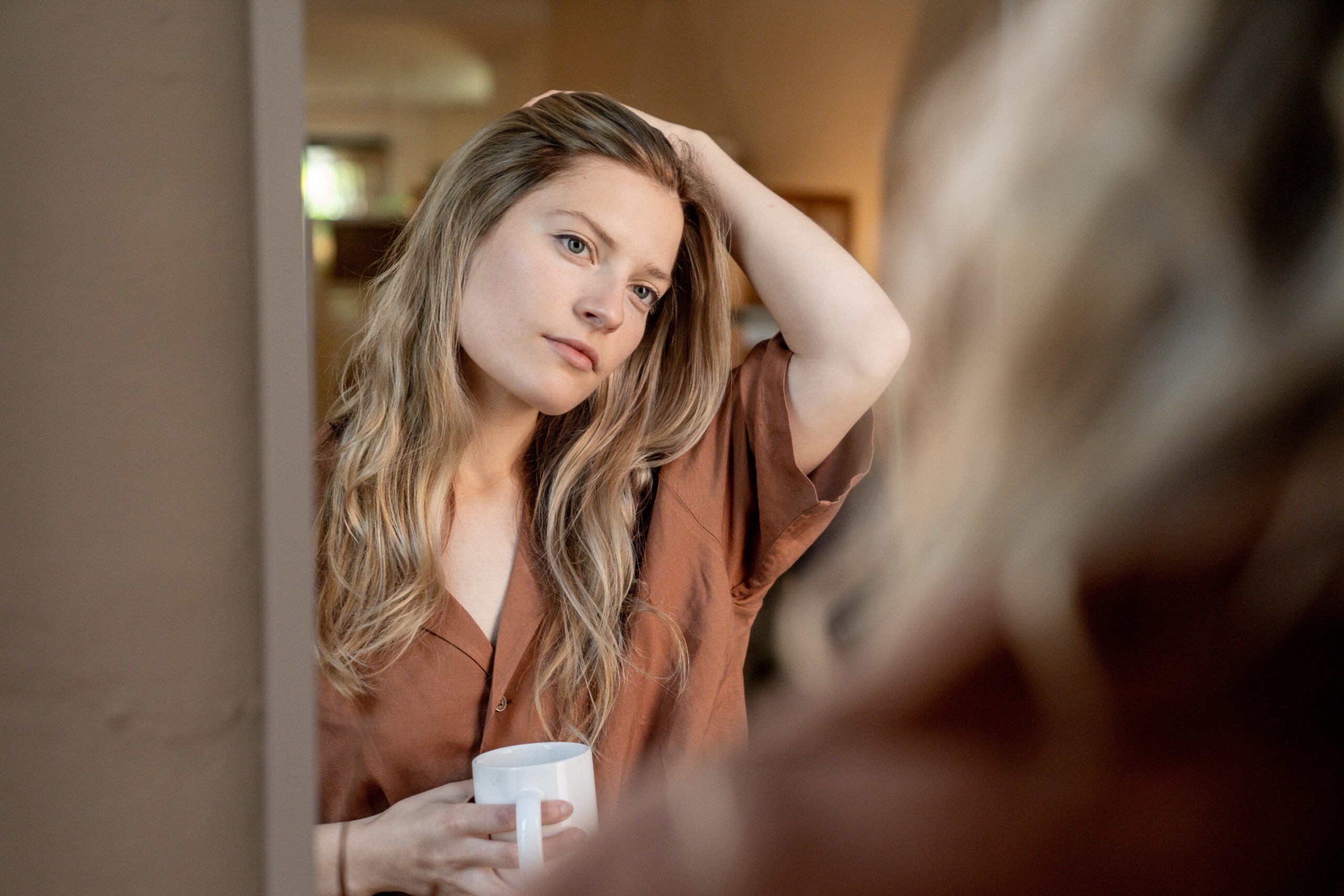 A woman stares critically at her own reflection (Photo by Kevin Malik, Pexels)

The #PrettyPrivilege began trending on TikTok earlier this year, as people began to discuss their experiences benefiting from their good looks. “I realized I literally got every single job I’ve ever applied for, even if I was underqualified,” shared one user. This is backed up by research; an entire field of study exists to specifically examine the economics of physical attractiveness. Researchers of pulchronomics have found that attractive people are not only more likely to get hired, they also earn higher salaries than their ugly peers. In a world obsessed with physical appearance, is there space for those who don’t fit the mold?

Gianni Aluigi appears relaxed as he sits at the table, absently playing with his sunglasses. He is stocky and balding, dressed in a loose black t-shirt from which hangs a pair of reading glasses. On the front of his shirt is the crest of the Club dei Brutti, featuring a reclining man smoking a pipe. Written underneath the crest are the words “La bruttezza e ‘na virtu, la bellezza e schiavitu”—ugliness is a virtue, beauty is slavery. This is the official slogan of the Club dei Bruitti, or Ugly Club, of which Gianni is President. It is his job, along with the Club’s Grand Council, to assess new members. During this process, new members must visit the Club’s headquarters in Piobbico, a medieval town nestled in the mountains of central Italy. The new member’s physical appearance is then rated on a scale of ugliness: non definita (undefined), insufficiente (insufficient), mediocre, buona (good), ottima (great), and finally straordinaria (extraordinary). However, these rankings are simply a formality to Gianni, who asserts that “time makes us all ugly”. Anyone willing to make the journey to Piobbico will be welcomed with open arms.

The Club dei Brutti has its origins in the late 19th century as a matchmaking service for the village’s unmarried spinsters, particularly those who were considered too ugly to ever find husbands. It was revived in the late 1960s by a man named Telesforo Lacobelli, who shifted the ethos of the club towards dispelling what he called the “cult of beauty”. “Advertising and popular culture exclude people,” he asserts. “And if you don’t fit the mold they promote, you can be made to feel less than you are”. Members of the Club come from all walks of life, including famous backgrounds: there’s Armine Harutyan, a Gucci model facing backlash as a result of her unconventional looks, and Maurizio Costanzo, a well known Italian television host and journalist. What all of these people have in common, however, is their shared belief in an inner self worth that transcends physical appearance. “Being part of the Ugly Club doesn’t mean you have to be ugly,” says Benedetta Aluigi, daughter of President Gianni. “You are part of the club when you understand why you don’t have to be beautiful.” Many members report feeling better about their appearances after joining the organization. Being accepted into a community that recognizes and appreciates them offers a major boost in self-esteem. 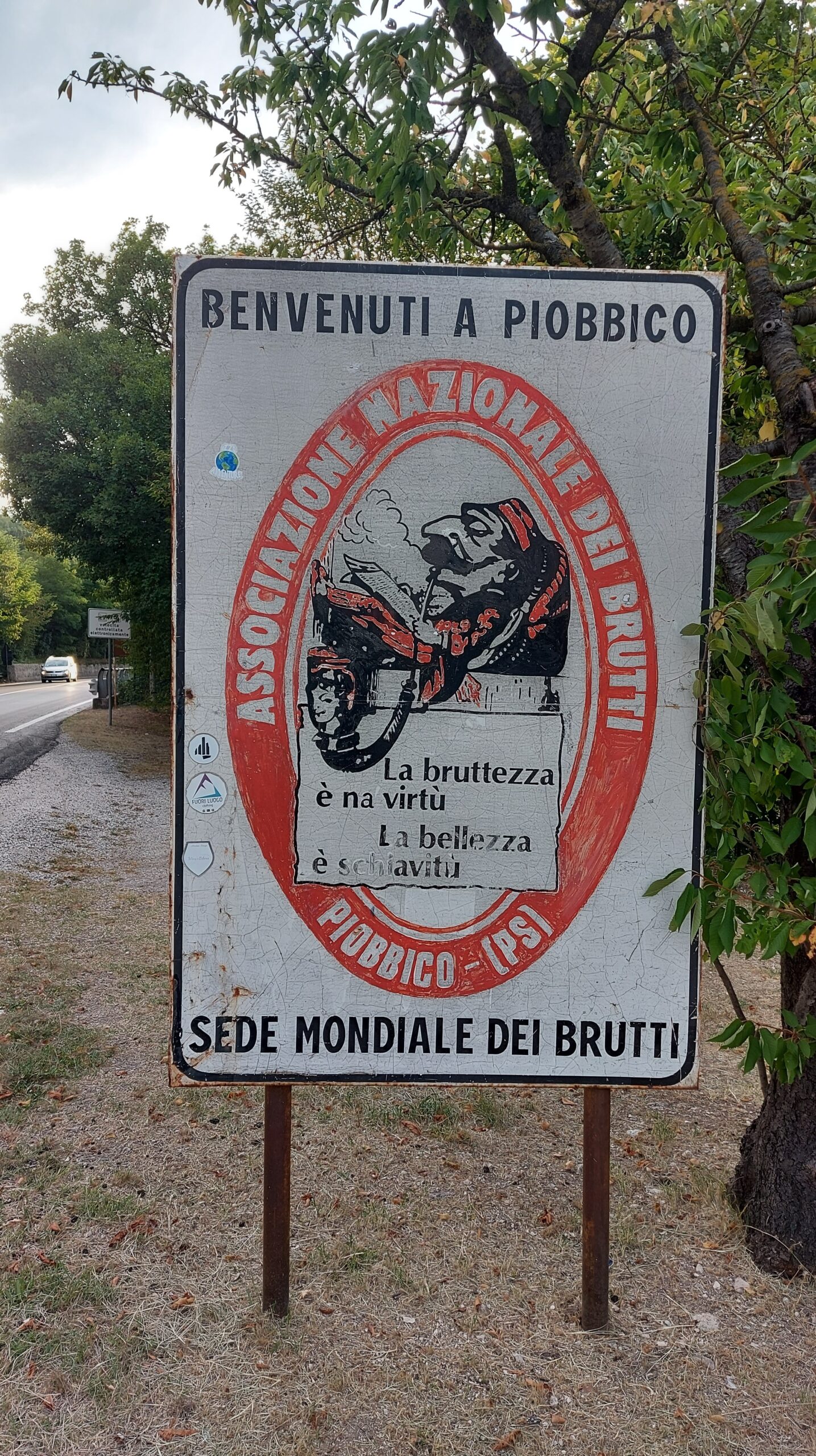 This ethos is most clearly embodied by the Festival of the Ugly, an annual event that takes place on the first Sunday of September. During the celebration, new members are welcomed into the Club, and elections are held for the Association’s president. The festival draws in members all around the world, who join together to celebrate their unique looks. There is dancing, drinking, and a Carnival-style parade. There are also awards to be won: the “No-Bell” award for the Association’s ugliest member, and the “Vulcano” prize —a reference to the Roman god, who was cast out of Olympus for his hideous looks. These are highly coveted prizes, a privilege reserved for those who have most fully embraced the spirit of the Club.

The Festival is a joyous occasion, but for many, it is also cathartic. The Club dei Brutti’s administration receives hundreds of emails and letters a year from people lamenting their ugliness and struggling with self-esteem. “There are many, many people who are haunted and tormented by what they see as their imperfect appearance,” says Iacobelli. “We are fixated, obsessed and indoctrinated by physical beauty. And that leads to much destructive self-hatred.” Social media has only exacerbated this problem. In 2020, TikTok was exposed for using a beauty-based algorithm that favored videos from conventionally attractive users. An internal document was also leaked which revealed that moderators were encouraged not to promote content from users with “ugly facial looks”. The Club de Brutti wants to challenge this discrimination, but above all else, it wants to create a space to escape it, even if just for a day. “The fact that this Club exists, and the ever growing number of our members shows that we are slowly succeeding in combating prejudice,” says Gianni. In the meantime, the Club de Brutti encourages those curious to reach out to them on Facebook or Instagram. Even sorority girls like Reese are welcome.