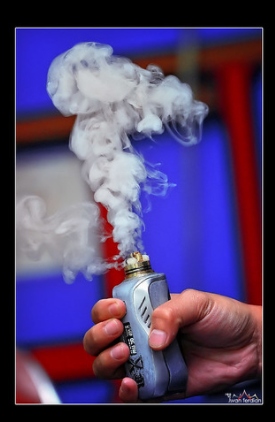 What is the vaping culture? And can we call it a culture? (Photo: Creative Commons)

It is no surprise the trend of nicotine devices has glued to the college-age demographic in recent years. These devices are very accessible, easy to use, and provide the user with a feeling that “takes the edge off”. In my personal endeavors, I am investigating the perspective on what Tulane students see on a daily basis on and off-campus, how they think vaping has changed over time, and what they believe can be attainable solutions to slowing this trend. I went to both ends of the underclass spectrum here by talking with first-year student Blake Mahmood and senior student Donvan Benoit at Tulane.

First is the younger Blake Mahmood, who was asked about his view on the prevalence of vaping on-campus. When asked about this specifically, his main point was that, “probably even more than half the students [on-campus] are daily vapers.” Mentioning the level of accessibility of vaping products for college students, this is no surprise considering how many stores sell vape products nearby. Nearly ten vape shops or drug stores that sell vape products surround the campus within just a few miles. Whether a student has sufficient transportation or not, the accessibility is second-to-none.

Similarly, Blake makes note of  age being a key contributor in enabling students to begin, or continue, vaping regularly. A few years ago the age requirement for vaping was 21, but now that it has been lowered to 18; this gives just about every college student the legal right to purchase nicotine devices. As newly independent young adults, it is foolish to assume these college students properly weigh the benefits or costs of purchasing and using nicotine devices. Seldom do peers encourage students to stop vaping unless it is an overwhelming, present issue with the individual. All of these factors play a part in the development of nicotine device dependency and even addiction for a growing percentage of the Tulane and overall student population among colleges on a national level.

With a different perspective from an older student, who is also an athlete at Tulane, Donovan Benoit was asked about his take on the culture of vaping in college, how it has changed over time, and off campus behaviors as well.

First, he tells us that at a typical off-campus social gathering where most people know each other is where sharing of nicotine devices is seen most. He says the exchanging words of “can I get a hit?” and “yeah sure” are too often heard among his peers and friends.

Even in this time when sharing an oral device goes beyond just being unsanitary, it is still seen quite often. When it comes to off-campus behaviors, vaping is not an illegal act. Therefore, these guidelines of vaping on-campus do not apply, and it is easier to see how much college-age students use these products. Nonetheless, Benoit makes note that whether you are an athlete or a regular student who lives on campus, you still see the act of vaping performed a lot.

One interesting aspect of vaping is that students are not allowed to perform the vaping act in public. Many campuses do not permit the use of vaping, but it always appears the rules are loose, to say the least. The time it takes to take a hit of a vape product is so quick that it rarely catches anyone’s eye who is not looking for it. If you have been around a college campus at any point in the last decade, you can almost guarantee yourself to see someone of the college age using a nicotine device of some sort. If you never saw one, then you were not a college student in the last decade. You are probably a professor or faculty member at the school. Students hide from those people specifically so they can vape.

Another important point Benoit makes involves the growing use of younger people using vape products. When asked about the differences seen in the last few years, he mentions a growth in “all these different flavors” such as “orange soda” or “rainbow skittles”, just to name a few, are a big reason for how companies are marketing their products to younger audiences. Even though age was discussed, Don also includes that “you used to have to be 21 to buy Juuls” and “they [FDA] changed it to 18,” which is again a major reason for this shift in students starting younger with nicotine device use. When they start younger, they become dependent at an earlier age. In these underdeveloped users, the impact of nicotine is greater than it is for the adults who are using nicotine devices for its proper use: quitting cigarettes.

Once a student becomes dependent on nicotine devices and possibly develops an addiction, it can be extremely difficult to stop. An emphasis on dealing with this issue is critical in all college communities as well as figuring out how to work through withdrawal symptoms when in the process of stopping. When you don’t how to start, a simple website with helpful information and avenues for connecting people in the same situation can be a great way for students starting their recovery. The social impact of normalizing this effort is significant, so collectively it takes a large acceptance from the macro community to make this trend change its course.