Editor’s Note: May we Mayke a suggestion? No, our suggestion is not that we stop using cringeworthy puns, but it is to think ahead! We know what’s coming: the summer. The time when the air is heavy, the tourists have abandoned ship, and us locals are left to enjoy our city, heat and all. That’s where we come in! All the month of May we are going to prepare you to “Ban the Boredom” by giving you the best places, the best restaurants, and the best event, but since we never do anything “normal” at ViaNolaVie, we are basing these suggestions around various psychological states! If you’re a total introvert, we’ve got a spot for you! If you have a disability, we’ve got the places that actually don’t discriminate and let you get down the way you want to get down. We’ve got something for everyone because New Orleans is the city for everyone! Up next, there’s a place that many of us have seen and looked at with “wow” in our eyes. It’s Vals, and writer Lucy Bishop is going to tell you exactly what might be producing that “wow” effect. 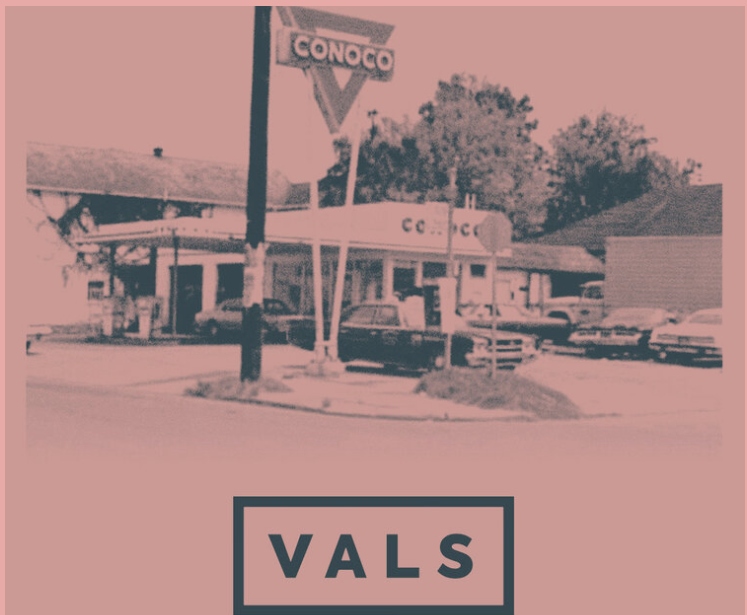 The vintage feel at Vals is unforgettable. (Photo from: valsnola.com)

Vals at 4632 Freret Street in New Orleans is a facade of a redone service station, allowing it to blend in with neighboring commercial businesses such as Anytime Fitness, Rouses Markets, Dennis’ Barber Shop, and the Bike Shop. Once a commercial corridor on the former site of two plantations, Freret street carries on this bustling feel with its plethora of small businesses.

Veering off the corner of Freret and Valence Street, I am greeted by a hostess who examines my vaccine card before leading me to one of the 15 pink tables in the outside patio which are spread out in a casual, disorderly manner. On nice days I prefer the outdoor patio to the inside area, in which two garage doors open directly into the bar room, and then, behind the bar, 16 more tables. The outdoor patio is engulfed by various tropical leafy green plants, turf, and an overhead canopy with dim, glowy light fixtures, and I quickly locate my friends at a table situated in close proximity to an outdoor heater. Chips and an array of salsas are seated on the table with them and to their side is an arrangement of colorful plastic plates. The waitress drops off the menu form, tick marks are placed besides the limited items on the menu, and then there’s a quick pick up of the menu and, in the blink of an eye, tacos. One sweet potato taco, one fried fish taco, horchata that is made-to-order, and elote for the table have simply appeared. Although Vals doesn’t look like a BBQ, the experience is reminiscent of an ideal BBQ, bringing customers in time and time again for the unique experience. 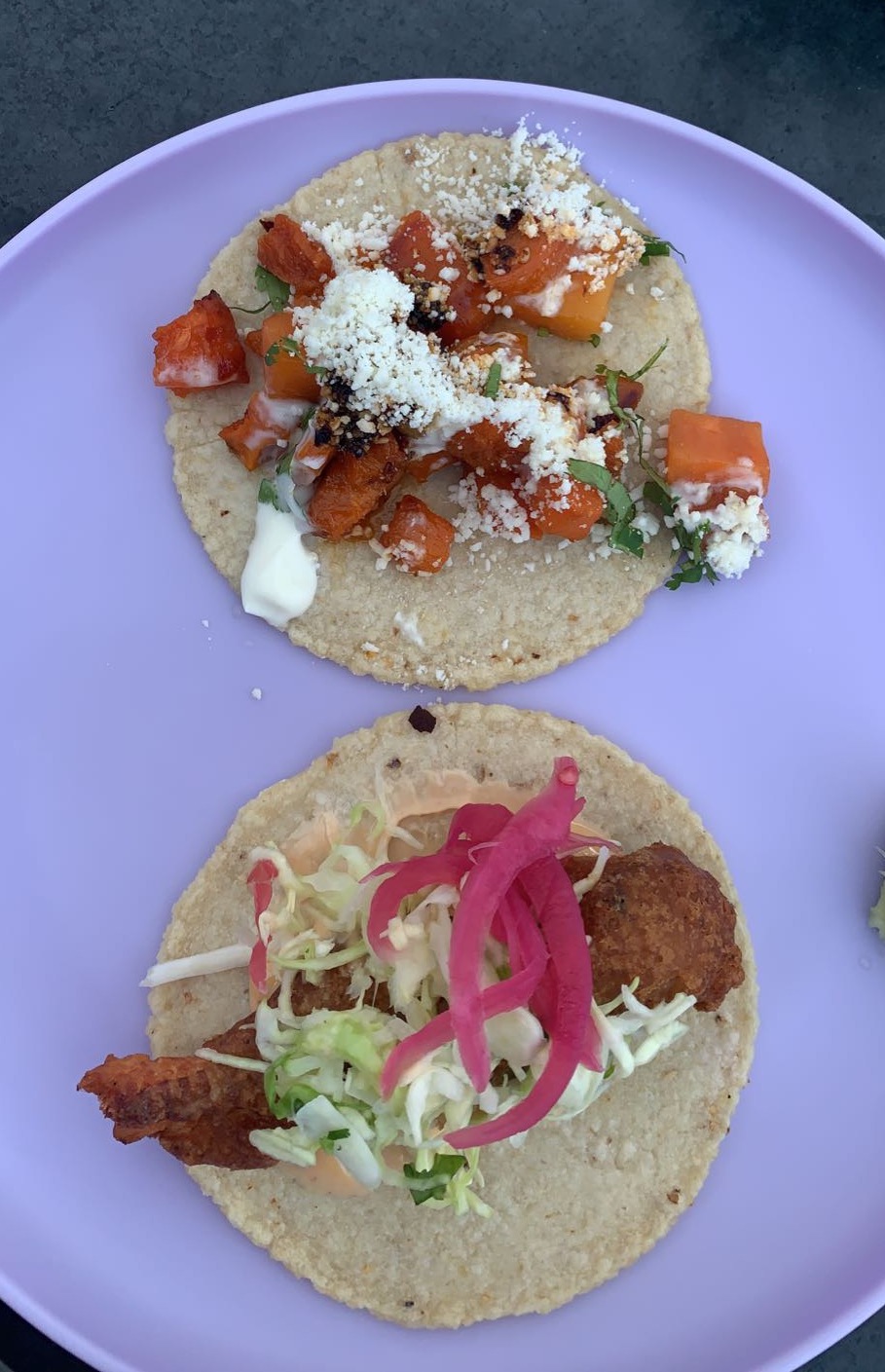 A sweet potato and fried fish taco at Vals (Photo by: Lucy Bishop)

There are many staple components that go into the ambiance and natural setting of a perfect backyard BBQ, such as the physical set up, lighting, and music. As it turns out, barbecues are beneficial for one’s mental health and even more so when they take place in green spaces. Studies suggest that eating outside makes food actually taste better, as the fresh air lowers stress hormones. Being outdoors is naturally a mood booster; yet, according to the United States Environmental Protection Agency (EPA), the average American spends around 90% of their time indoors, an issue alleviated by Vals outdoor dining setup.

The outdoor patio in Vals contains a section of turf as well as numerous large, leafy tropical plants sprinkled throughout the spread of tables. The seating in Vals consists predominantly of outdoor seating, allowing one to reap the benefits of being outside similarly to the vibe of a backyard BBQ. Lighting is also an essential component of the perfect backyard BBQ, with the best lights being string lights or tiki torches to create a soft ambient atmosphere. The lighting on the outside patio at Vals is illuminated by the sun shining through a yellow-tinted canopy during the day and dim overhead lights at night inside and outside. A successful BBQ also entails having seats for everyone. The New York Post  states that “patio furniture doesn’t have to be fancy, but you just want to make sure everyone has a seat, which is where the folding chairs come in handy”. The spread of identical plastic black chairs ensures that everyone has a seat and takes away any aspects of glamor or embellishment. In the words of Karl Lagerfeld, “Music gives color to the air of the moment”. Even more so, researchers have gone as far as to conclude that the music one listens to might directly alter the way that person perceives the world, whether that be good or bad. By playing relaxing tropical-infused tunes, Vals creates a comforting auditory experience behind the chatter of the restaurant. 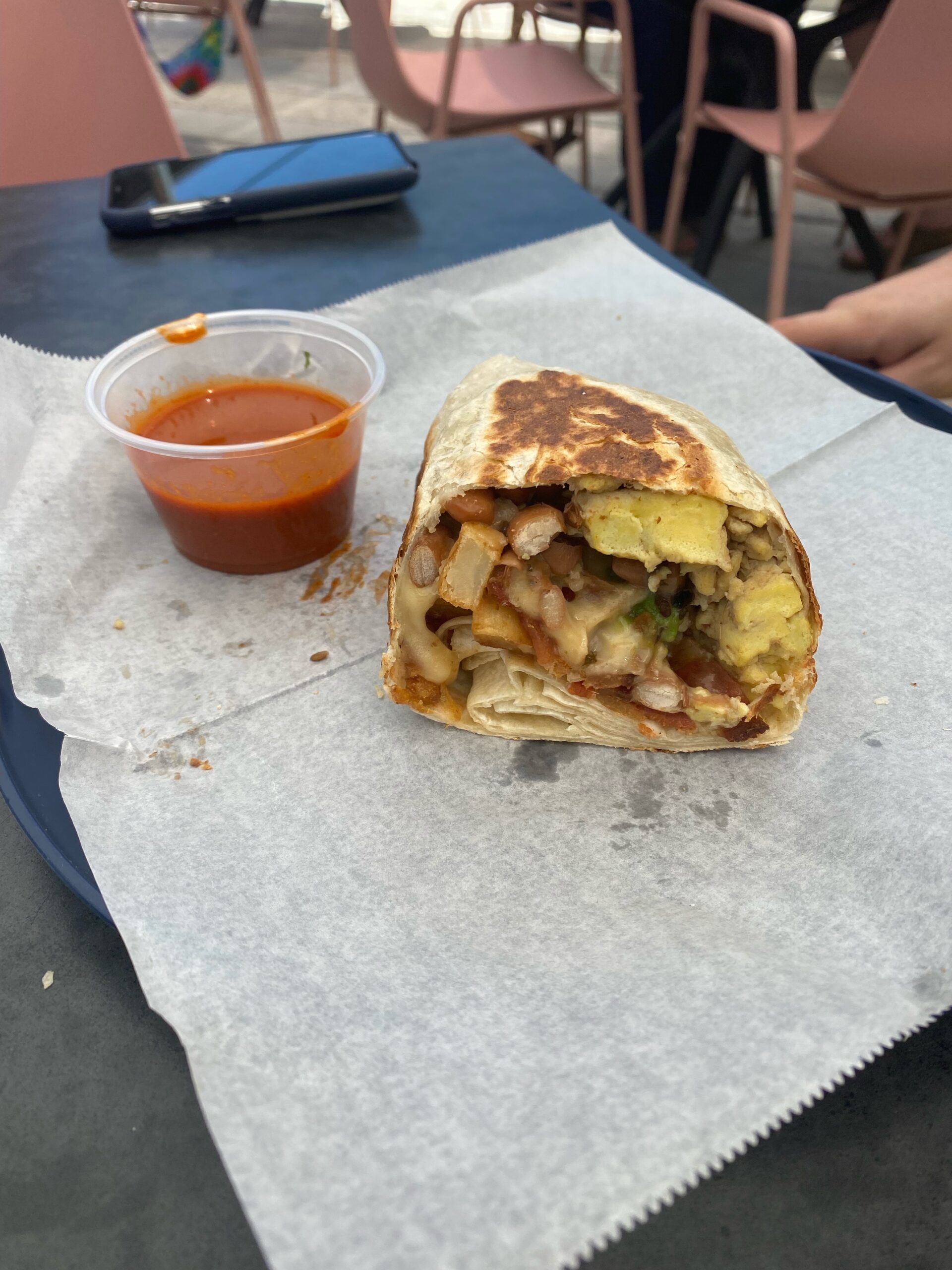 In addition to a luscious natural ambiance, a good backyard BBQ also necessitates the use of disposable plates and utensils. Although Vals doesn’t have disposable cutlery, the identical pink plastic plates and cups provide this same feel. Another special component of a BBQ is the idea of sharing a family-style meal, in which the focus is on conversation and indulging in shared food. A study on the correlation between sharing food from one singular plate and cooperation between people found that a family-style meal promotes coordination and cooperation because it forces one to balance our needs with the needs of others. More so, the study found that eating food served centrally, from one plate, improved coordination, which positively predicted cooperation for both friends and strangers. This concept is unfortunately swallowed by the United States’ individualistic cultural values. In collectivist societies, such as many Asian countries, sharing food that all comes from one plate is considered the norm and there is a prioritization for group needs over individual needs. At Vals, tacos are brought out on one central plate and then passed onto individual plastic plates. Everyone eats the same juicy tacos with their hands, laughing and conversing in their pink plastic chairs, embracing a nostalgic break from the pressures of everyday life.

Of course one can’t forget the essential rule of providing delicious comfort food at a BBQ. A study found that comfort food truly is good for the soul and its allure and consumption has real psychological roots. The experiments conducted supported the notion that comfort food alleviates loneliness and creates a sense of belonging. The first experiment found that volunteers who thought of chicken noodle soup as comfort food possessed more relationship-related worlds when they ate a bowl of soup. The second experiment found that volunteers who had secure attachment styles and wrote about comfort food didn’t feel as lonely after facing a belonging threat, such as a conflict with someone close. From the scrumptious tacos to the elote, chips, and queso, Vals is the epitome of street-style comfort food that satiates both the stomach and the soul in a similar way to the food served at backyard BBQ.

After devouring our tacos, the table is merely a mess of pink plates scraped clean of yumminess and crumpled napkins used to sop up the juices dripping from our fingers. The waitress swoops in to clear the carnage, we each pay our bill, and depart only to return very shortly and do it all over again.