Fernando Lima: the seen and unseen of French Quarter Festival 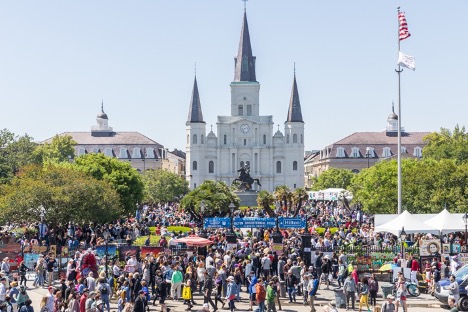 There are two sides to French Quarter Festivals, Inc. : (1) the history and traditions that keep the city alive (2)  the faces behind the non-profit’s magnificence, which may be lesser known.

The organization hosts French Quarter Fest and Satchmo Summerfest annually, along with specialized Holiday New Orleans Style experiences for visitors of the Big Easy. But who are the artists behind the funky tunes, gourmet dishes, groundbreaking art and festival production as a whole? Playing French Quarter Festival since 2015, Brazilian drummer Fernando Lima opens the door to understanding the journey of a creator in New Orleans and how the devotion and experiences of French Quarter Fest’s artists go beyond what the eyes of attendees see.

Did you ever have other dreams than playing music?

I didn’t have other dreams. I think I was just hitting all the stuff in my mom’s house with wooden spoons and my mom was like, “let’s get you in drum classes.” After 3 years of doing that, I was like, “eh, maybe I’ll go to a music career or something.” I was in between that and being an engineer. I was sort of interested in engineering but music was definitely my passion.

What is the biggest challenge you’ve overcome in your life?

Definitely moving my life completely from one country to another. I moved [to New Orleans] and could barely speak English – I could barely communicate myself. I feel like I was able to accomplish staying here because I wanted it. The more I was here, the more I wanted to be here, but transitioning to New Orleans was a culture shock.

I mean with the language – I had English classes in Brazil when I was in school and they were like, “Okay, let’s learn this… How  are  you  doing” and then you get here and the first person you see looks at you and says, “How you doin’?” and you’re like, “What does that even mean?!” 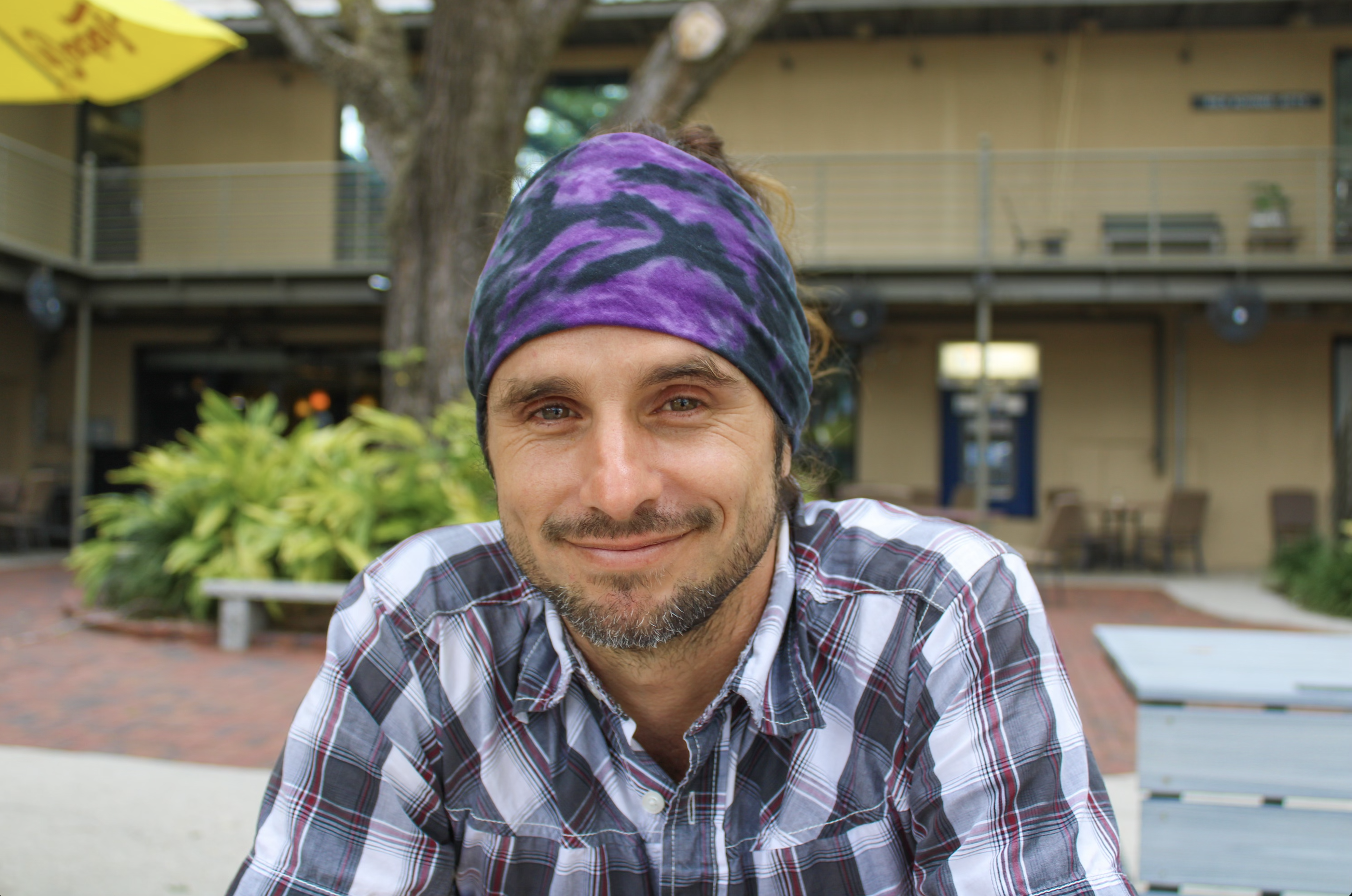 I had a friend from São Paulo connect me with a Brazilian guy that lived in New Orleans, and when I came, my first gig was Jazz Fest. I had no idea what that meant at the time, but it’s crazy because I played Jazz Fest every year until the pandemic. After this first gig, I started playing on the street, and I met Jonah, who plays this amazing African instrument called the kora. I didn’t have any gigs then, so I was playing on the street everyday with Jonah.

When you say you’re playing on the streets, is that just playing in the French Quarter for passersby?

We were selling CDs and recording, and just playing and making tips. It was a very strong busking band we called Bukubroux. We were the first band ever that initiated music in Marigny Brasserie on Frenchmen Street. This was a very important band for me. It shaped the way that I played drums… I adapted to Jonah playing the kora and totally rethought my drumming in a lot of ways.

Did busking with Bukubroux lead you to play French Quarter Fest?

When we were doing French Quarter Fest, we were not playing on the stage; we were playing behind the courthouse. We were busking there and nobody would stop us.

Jonah and I were waking up at 6am, going there to get the spot, and starting at 11 to play until around 7. It was dedication. I was also playing with this band called Vivaz while going between other bands, but I was always sticking with Bukubroux.

With Vivaz, I began playing French Quarter Fest. This was funny because the stage Vivaz was playing was in front of the courthouse. I was still going to the street and waiting there with Jonah to hold the spot, playing at 11, and then I would take a break around like 12:40 and go around to the front of the courthouse and play French Quarter Fest with Vivaz. After, I would grab my stuff and go back to the street with Jonah. That was very important to me to go back to the street to play with Jonah. There never was a time in New Orleans that I have seen myself as stepping up from the streets to the stage. It wasn’t that feeling. It was just a different stage to me.

When you were with Vivaz and first heard you were playing French Quarter Fest, what was your reaction?

There was a big reaction because it’s French Quarter Festival, and I was going to be part of that. I still was a fresh fish in this town, and it was very important for me to play there because it is such a big local festival. It slowly made me feel like I was part of something. Moving here, it took a while before I started to feel like I was actually here. When you leave where you come from and come to a new place, you might feel in limbo for a bit. The first time I played French Quarter Fest, I began to feel like I belonged here in some way. Playing for the city and for the people that come visit here made me begin to feel like I was New Orleans. I see FQF really giving these opportunities to local musicians.

How are you feeling about playing this year at the first French Quarter Festival since the pandemic?

This year, I’m playing with Amigos do Samba, which is Brazilian samba music. Me and the entire band are excited to feel part of this community of New Orleans when we play.

What I love about French Quarter Fest is that the people are there to watch the shows – I really enjoy the heat of the crowd at FQF. They’re not there by accident; they chose to be there. They are there for the music and really appreciate it a lot. And what is New Orleans without music, you know? One of the unique things about New Orleans is that it is such an artistic city. The art is everywhere in the Quarter – brass bands, street musicians, artists, painters – it’s everywhere. I feel like art for me is just a metaphor for expression, and all of these artists together are this beautiful huge explosion of expression. At French Quarter Fest, you have a crowd that wants to see these expressions, and that is special.

Fernando is one of the many faces of FQF who contribute deeply and so meaningfully to the cultural events and city as a whole. With their own deep love and appreciation for New Orleans, every artist has a rich past that makes their admiration for French Quarter Festivals, Inc. unique and allows them to enrich the culture and heritage of New Orleans with their own touch. This weekend, ask the people around you at French Quarter Fest what unique journey has led them to the Vieux Carré, and as you look at the vibrant community around you, you will see each individual as a unique piece of New Orleans worth celebrating.

Hello everyone, my name is Finley Arthur from Georgia. I don’t have much to say as happiness has restored back in my family with the help of Dr Marabul. I never thought i could this be happy again ever since my husband left me last two months and left me with two of our kids and run away with another woman, ever since then it has been hard for me and my two kids. When i explain my situation to my friend and what i have been going through that was when my friend told me that i should not worry that she have some one that can help me and all my problem will be gone over night and she introduce this man to me and when I contacted him! he told me that i should not worry that my problem is a very small one, I decide to do what he said because i want my husband back to me and I can assure you that within 48 hours my husband come back to me asking for forgiveness and now I can tell you that joy is just a starting point in my family. I urge any everyone out there who have been facing any problem to contact this man because he is best and he will solve your problem. You can contact him on marabulspellcaster@gmail.com or WhatsApp him on +2207835430.

I became a vampire because of the way i have been treated by the people of this world, this world is wicked and not fair to any body. Ever since i became vampire at the snack of my finger things are made happened .I am now a powerful man and no one step on me without an apology. I can turn to anything when ever i want. I am one of the most dreaded vampire well know in West Africa and i have travel world wide ever since i became vampire. I will remain young as long as i want and i can never contact any virus or disease. I become a vampire through the help of my friend who will always travel to USA together, he introduce me into vampire world by giving me their email. If you want to become a powerful vampire kindly contact the vampire world on their email. vampirelord260@gmail.com or WhatsApp +2207835430

Dean Murphy
Recent Posts on ViaNolaVie
Donate to ViaNolaVie!     GIVE BACK TO THE NEW ORLEANS PUBLICATION THAT’S ALWAYS GIVING!  ViaNolaVie,...