Artists in their own words: Evan Strand 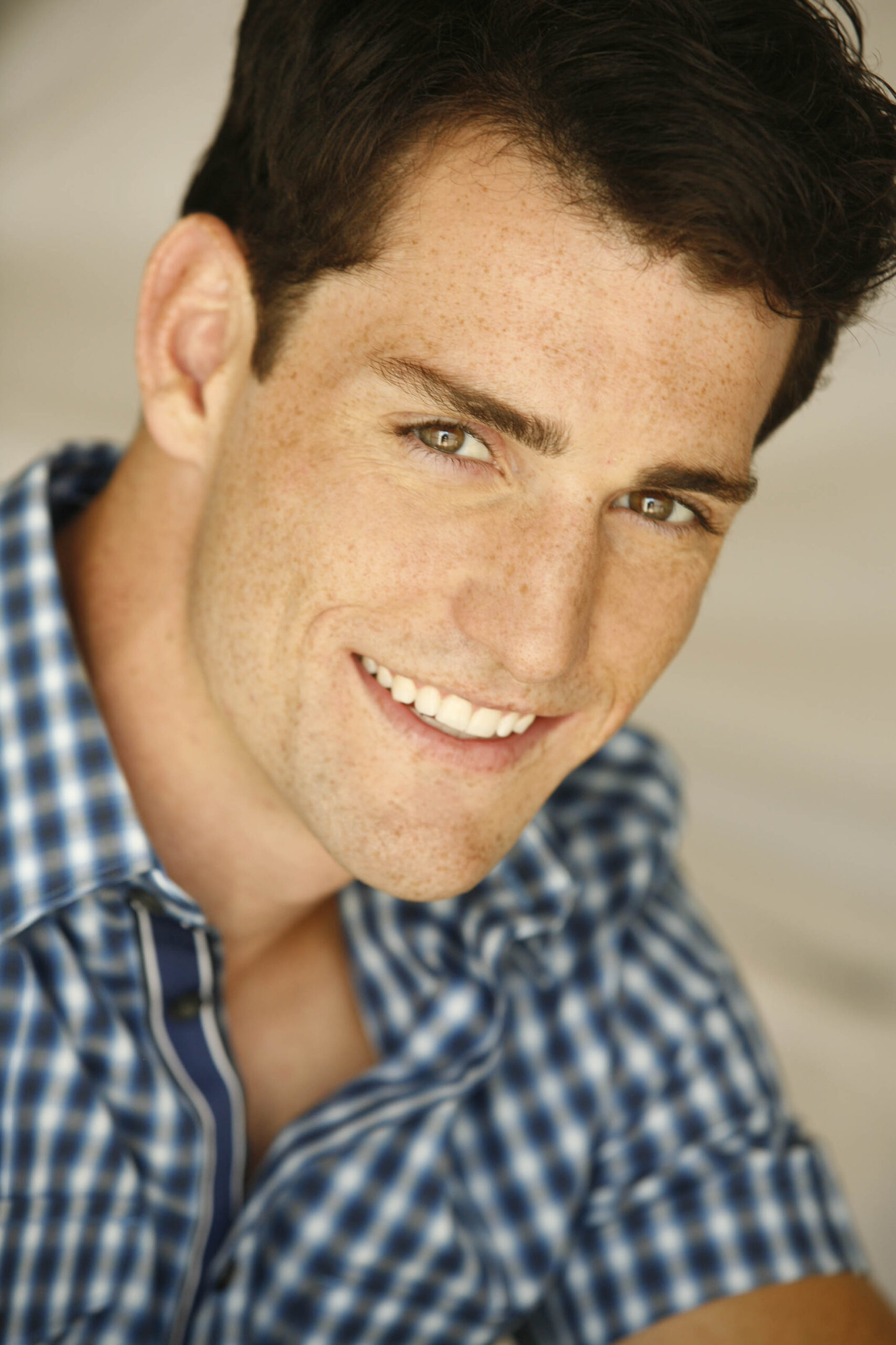 What: Actor, who plays Sven in the upcoming engagement of Frozen, which will play at the Saenger Theater on February 10-20. Sven is also played by Collin Baja, but you need to go to the show to find out who’s under the costume.

KC: When do you think that pretending is the most important thing in our lives?

ES: I interact with a lot of kids, and the importance of pretending is so present in their lives. They develop their imaginations, and I think keeping that is incredibly important.

We always want to grow up when we’re little; we see our friends or our parents and everything they’re doing looks exciting to us as kids. As a teenager you can’t wait to do your own thing; what we don’t think about is becoming an adult and doing our taxes [laughing]. The imagination of what it would be like to be an adult is even present when we’re younger.

Personally speaking, throughout high school and before and after high school as well, I got told, ‘Evan, act your age.’ I always was thinking: I am. I feel like a kid. I am a kid because I never want to give up my imagination.

To a certain extent, I hope we never lose pretending and imagination. It’s one of the reasons I love what I do.

KC: So let’s talk about Sven. If you were to choose Sven’s spirit animal, who would it be?

ES: His spirit animal would be Elsa. Sven has everything she wants because he has ultimate freedom. He’s able to do what he’s not supposed to, and he completely gets away with it.

I’ve had this backstory for Sven. Caroline Bowman, who plays Elsa, is absolutely amazing, and I joke that maybe Elsa doesn’t want to come back. She’s not necessarily evil, but she’s doing her own thing, and she makes the statement, ‘anybody that comes with me, I’ll spare you, but everybody else…duh duh duh.’ No one moves. The entire kingdom stays there, but Sven goes with Elsa. He’s got his fur coat, so she can’t ever really freeze him. He has his armor, and she has her’s, so they can both live their lives.

I have a lot of time to think in my costume [laughing]. 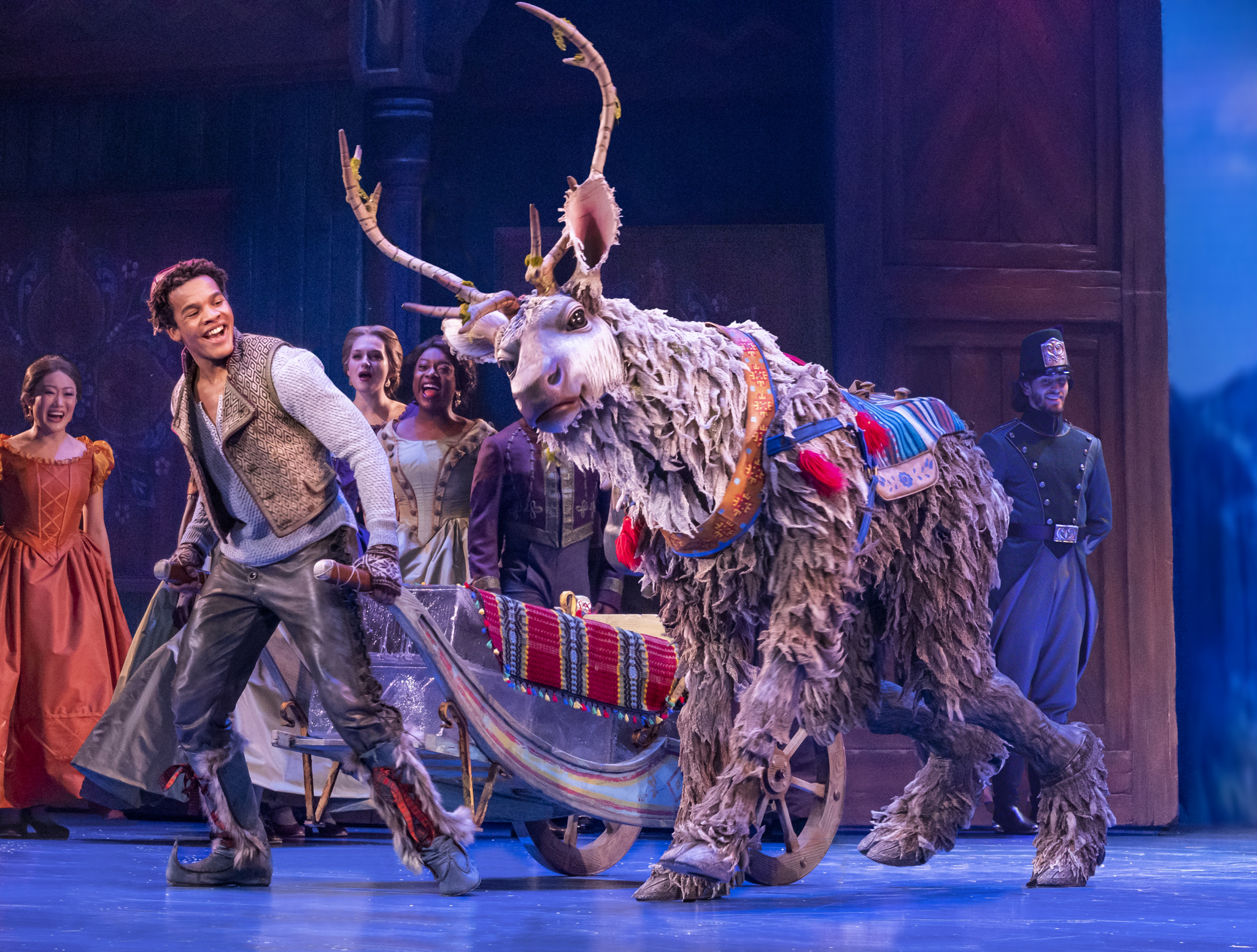 Sven and crew in Frozen. (Photo by: Teg Folks)

KC: So what about your spirit animal?

ES: Olaf. No question. His response to everything, even when everyone is freaking out, is: ‘it’ll be fine.’

KC: How do you deal with boredom?

Among my friends I’m known as the guy who will say, ‘yes,’ and that keeps me from getting bored.

I’m always looking to do more; I taught myself Japanese when I lived there with Tokyo Disney, and I’m learning sign language. My girlfriend’s mother is deaf, so we are working on sign language together.

I remember reading this Harvard study, and they wanted to measure what made people happy. Happiness went beyond money or materials because they found people in countries that didn’t have a lot of money or materials, but there was still in a high level of happiness. They found that what it took was having 3-5 great friends. That’s it. Beyond our basic needs, what someone needs is somebody they can rely on to go to in good times and bad times who’s going to be there for them, no matter what.

I’m never at risk of becoming bored because I simply call my friends.

KC: I have to know, has the pole vaulting ever come into play?

ES: Yes. I did a commercial that involved pole vaulting. That’s one of the reasons that I love acting. I have so many talents and so many things in life that I want to do, and this job is the only place that I can do all of it and utilize my skills in everything I do.

KC: What have you learned from being in this production that you never expected to learn?

ES: I love this question. My answer comes from Sven and the way he interacts with everybody else. In the play, I don’t have any singing. I don’t have any lines. I go through motions and movement, but it’s not really dancing; yet, I have one of the biggest impacts in the entire show. They even thought about possibly cutting the Sven character, but it received so much backlash that they couldn’t do it.

There are parts in the show where I have to be completely still. If I move, I’ll take the focus. I mean, I’m 6”1’ already, and the Sven costume is huge. I’m on stilts, and I have this giant head for the costume, so I’m a massive beast on stage.

I think that’s really cool. I’m very personable, and I love to interact with people. I look at people, and I love the energy that moves between people, but when I’m in my costume, I can’t see anything. It’s a lonely space in many ways; yet, I know that I’m making a difference by being on stage. 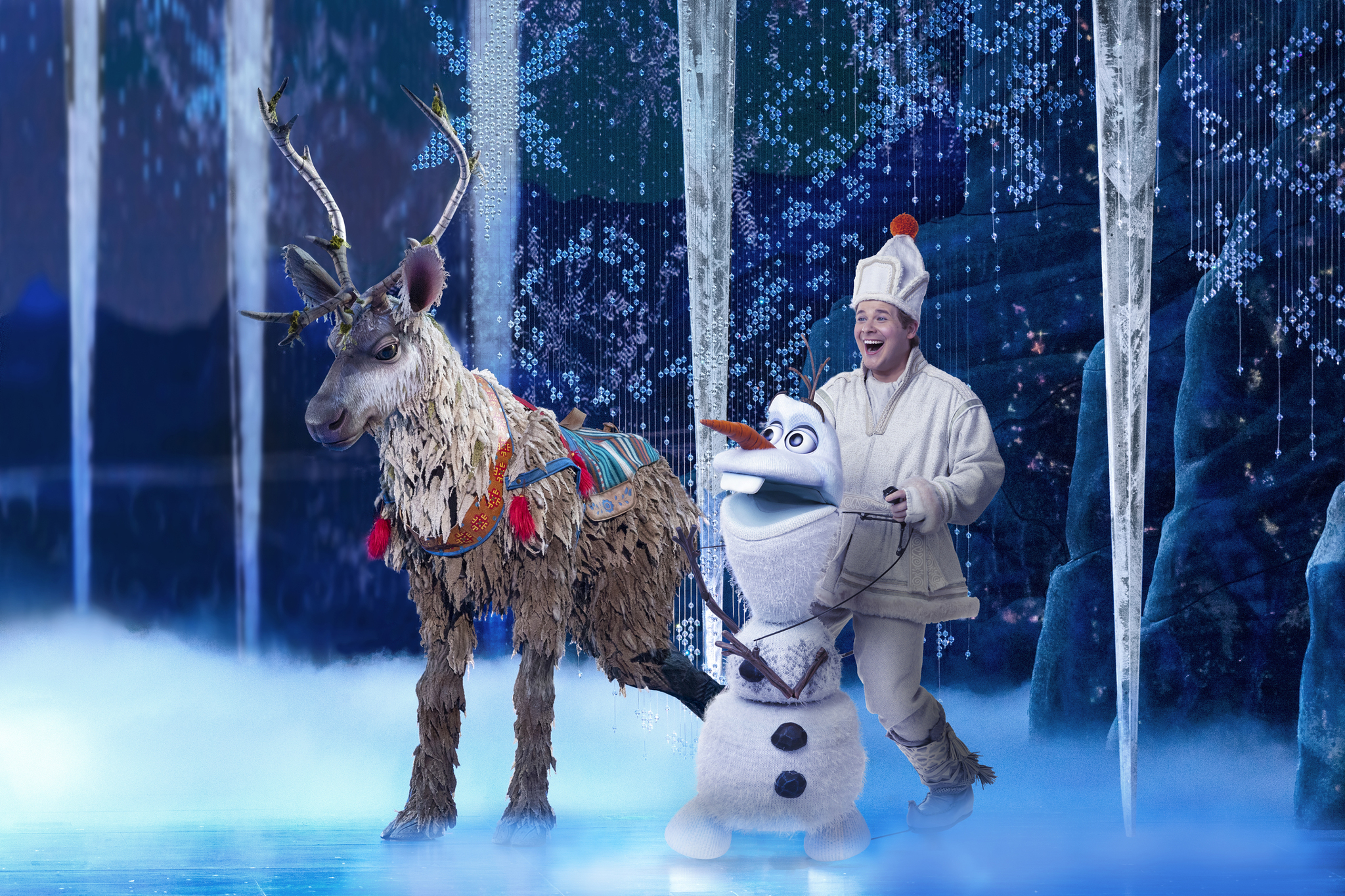 Sven and crew in Frozen. (Photo by: Teg Folks)

KC: What your worst castle story?

ES: Oddly enough, I’ve got a lot of castle stories, but they’re all great. I’ve been to castles in Scotland, Ireland, England, Amsterdam, Holland, France, and Germany.

Not too much weird or strange stuff has happened to me. One of the castles in Holland that I went to had a man that showed us a bunch of tricks with birds. He’d have the bird fly maybe 100 yards away, and then he’d put a piece of meat above my head, and the bird would come swooping straight toward me and get the meat. It was really cool.

I was told that certain castles were haunted, and I heard some sounds here and there, but I figured they were just pots and pans. Although, somewhere I’d really like to visit, and that I consider a castle is the pyramids. I know they aren’t shaped like a typical castle, but I still think of them as such.

I think what’s really cool about going back to those old castles is the use of tapestries. The truth is that they needed those tapestries because castles — even today — are so cold. I slept over in some of these castles, and all I got was some blankets and then I had to hope for the best. In a way, I guess those castle stays were preparing me for Frozen.

You can see both Evan Strand and Collin Baja star in the role of Sven for the production of Frozen, which will be on stage at the Saenger Theatre from February 10-20 as part of the 2022 Hancock Whitney Broadway in New Orleans season.

EVAN STRAND (Sven at certain performances) grew up as a professional ballet dancer from Southern California, and has now transitioned into acting and singing as well. Some of his favorite work has been with: Zoot Suit at the Mark Taper, The Reddi Wip Man in “Hairspray Live,” Sweet Charity at the UCLA Freud, ABC’s “Grey’s Anatomy” and many more. He is delighted to make his Broadway National Tour debut as Sven with Frozen! Thank you to my Mom and Dad, my manager JC Gutierrez and the whole team at IAE, Rachel Hoffman and Telsey + Co. @evan.strand