Professional wrestling as a cultural industry

It is beneficial to first define professional wrestling and underscore both what it is and what it is not, as the sport is often misunderstood. Many point to the fact that the characters and matches are scripted and call it fake, but it is more similar to reality TV—and that is without including the multiple different reality TV shows based around the lives of different professional wrestlers, such as “Rhodes to the Top” which follows the lives of professional wrestlers Cody and Brandi Rhodes. The scripted nature of pro wrestling is hard for a lot of people to wrap their heads around, but this is actually one of the strongest reasons for it being a cultural industry. As professional wrestler Kracker Jak puts it, “Promoters [realized] that they could make more money if they started rigging elements of the competition to create stars and build anticipation for matches.” Professional wrestling does what other forms of wrestling cannot by using scripted elements: it expands from a sport and into a cultural industry. 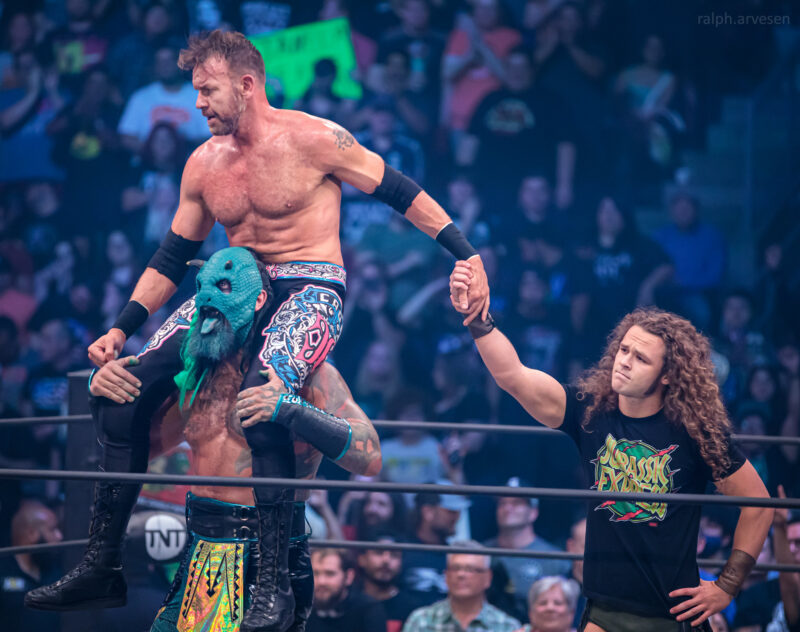 Currently, the professional wrestling industry is dominated by one major player, World Wrestling Entertainment (WWE), but it is important to note that there are other major players in the field, the most notable of which is All Elite Wrestling (AEW). WWE is who most people think of when speaking of professional wrestling, but it is important to highlight how unlike other companies they are. AEW has become well-known in large part due to the way in which the company works to be as unlike WWE as possible. By focusing on these two companies and their differences, it is easier to see the subtler ways in which cultural industries both affect and are affected by consumers.

Both WWE and AEW are constantly looking to gain more loyal followers—after all, they are companies. Thus, they have to follow the fans’ wishes. One of the most notable ways in which these companies advertise themselves is through the social medias of their wrestlers. Twitter is one of the most common ways that they do this because, as Djick notes in “The Culture of Connectivity,” Twitter is “a live stream of uninhibited, unedited, instant, short, and short-lived reactions—a stream that supposedly taps a real-time undercurrent of opinions and gut feelings.” It might seem as if it would be difficult for wrestlers to maintain their scripted characters in this atmosphere, but Twitter is often one of the easiest places for the wrestlers to further showcase their carefully constructed identities. Whether someone is meant to be antagonistic—such as the wrestler Maxwell Jacob Friedman who uses his Twitter to insult his fans more than his opponents—or they are meant to be lovable.

However, Twitter also is an example of ways in which the companies will work to shape fans’ interest to meet their needs. Official accounts for both WWE and AEW will tweet about upcoming events multiple times a day and are often some of the first places where the companies announce when to buy tickets for shows. It is a common tactic to pose questions in their tweet, such as which wrestler fans predict will in a match, to try and get more interaction and reach a wider audience. Both companies also have multiple hashflags, a phenomenon specific to Twitter in which certain hashtags will get a custom Emoji automatically placed with them; an example of this is the way in which the #WWERaw hashtag will automatically display WWE’s symbol for Raw immediately after it. These hashflags are specifically chosen and paid for by the companies in the hopes that they will make their brand more recognizable to potential customers.

Of course, WWE and AEW must both have things to promote for these hashflags to work. One of the ways in which AEW has begun to branch itself out more is by hosting short, low stakes matches at Universal Studios and showing them on their YouTube channel for free twice a week. All other AEW matches—and WWE matches as well—are only available on a TV channel that requires a TV subscription service or on their occasional pay-per-view shows, so this completely free method of watching matches is an entirely unique venture. Djick highlights the growing similarities between YouTube’s content and TV content and these AEW matches further blur the line between the two, making them nearly indistinguishable. Moreover, these easily accessible matches may stoke fear in smaller wrestling companies who have been hit especially hard by the pandemic as many fans are not comfortable going to matches in person still but want to engage with more cheap wrestling content. These lower stakes matches may not mean much for AEW, but they highlight an interesting—if potentially troubling—trend within the cultural industries.

For WWE and AEW to be cultural creators, they must both react to and create culture, but the two companies often choose to do so in vastly different ways. Most notably, WWE tends to lean more towards creating culture whereas AEW leans more towards reacting to culture; perhaps this is influenced by the fact that WWE has existed far longer than AEW and WWE has spent more time being run by businessman Vince McMahon while AEW was founded by a small group of pro wrestlers who all still wrestle for the company while also working on the business aspects of it. WWE tends to focus more heavily on what they know to work well, not really pushing the limits too far unless they know the money will be worth it. On the other hand, AEW is more willing to try new things and work with the fans to create better, more interactive content. This difference may be why we see AEW rising to the top quickly while WWE struggles to gain new fans. As AEW’s president and CEO Tony Khan recently pointed out, AEW’s Wednesday night show Dynamite has gained more viewers than FOX News for the past six weeks and AEW’s most recent Friday night Rampage event was ranked number seven in viewership for that night. 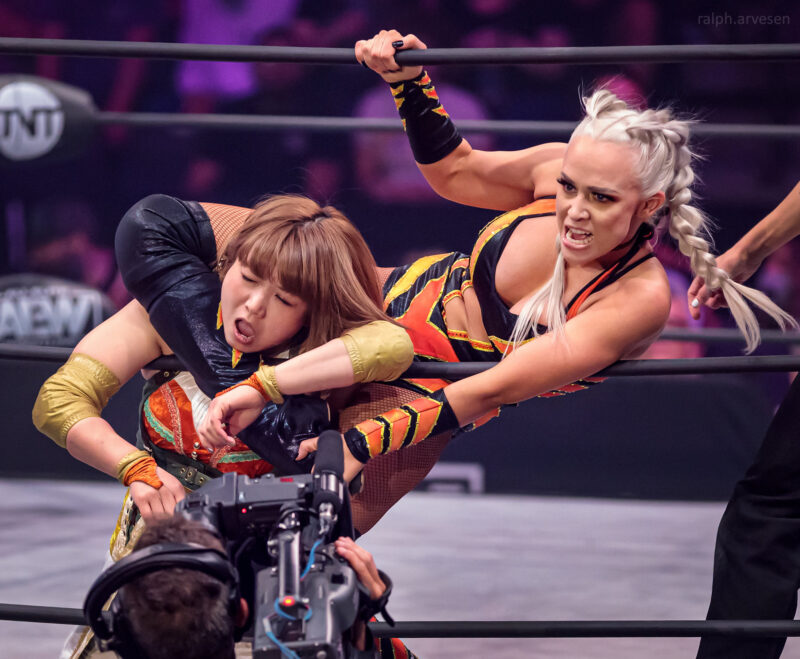 There may be more to why AEW seems to be progressing at a faster rate than WWE though, and much of it boils down to diversity and inclusion. Professional wrestling has long been seen as a masculine sport and pastime, even as more and more women are joining the ranks of the companies and their viewers. Hesmondhalgh discusses many ways in which cultural industries both have and have not progressed with social justice movements, but he notes that much of the positive progression in cultural industries has come from individuals advocating for more visibility. He adds that “the result has been a more complex relationship between the texts produced by the cultural industries and the key dimensions of inequality in contemporary societies.” Gender differences used to be the most prominent differences in professional wrestling, but in more recent times it is much easier to see the difference between AEW and WWE in regards to the representation of LGBT wrestlers and wrestlers of color.

In his article “Gay-Themed Television and the Slumpy Class: The Affordable, Multicultural Politics of the Gay Nineties,” Becker argues that the rise in gay material in mid-90’s TV shows came as a result of the primary demographic for these shows became young professionals. While many decades have passed since this time, it seems as though professional wrestling is only recently beginning to follow this same trajectory. One of AEW’s founders, wrestler Kenny Omega, first came to notoriety when he wrestled as part of a tag team known as the Golden Lovers, and it is widely theorized that their onstage image of two lovers also went off stage into an actual relationship. Similarly, the wrestler Effie has become known for using his gayness as a gimmick in events he hosts as well as his individual matches, though it is important to note that his actions are also often critiqued as being sexually predatory. Finally, one of AEW’s top female wrestlers, Nyla Rose, is a transgender woman who is openly accepted by her fellow wrestlers and many fans. On the other hand, WWE does not host any openly LGBT wrestlers at the moment, but it does boast a very strong relationship with both the Saudi Arabian and Chinese governments, something critics point to as being actively harmful to any LGBT wrestlers they may have. 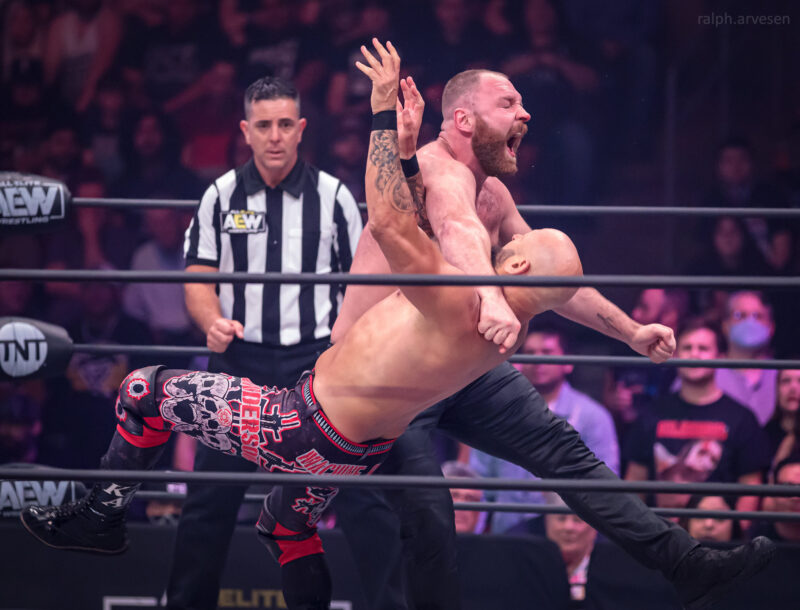 While professional wrestling cannot be directly compared to a wholly scripted TV show, some of what Belcher discusses in her article “There Is No Such Thing as a Post-racial Prison: Neoliberal Multiculturalism and the White Savior Complex on Orange Is the New Black” can be applied to professional wrestling as well. The color-blindness in professional wrestling, such as that which Belcher discusses in Orange Is the New Black, “belongs to the middle and upper classes.” It is no secret that American professional wrestling is largely dominated by white people both in the ring and in the stands, and it is also no secret that the sport can be expensive to partake in as well as to enjoy, despite many wrestlers’ lower-class beginnings. Both AEW and WWE boast multiple groups that are centered around the wrestlers all being Black, the second largest race represented in professional wrestling, but none such groups exist for other races. Moreover, despite the close relationship AEW has with many luchador companies in Mexico and some Japanese companies, wrestlers from outside of the United States and Canada often cast their culture to the side. In recent years, wrestlers of color have been able to develop characters that do not fit into racist stereotypes, but it used to be far more common for their scripting to play into these harmful ideas. Some exceptions do exist within AEW, in both positive and negative ways; the wrestler Thunder Rosa is known for her pride in being Mexican and will often wear the Mexican flag after winning a match, but it also is not uncommon to see microaggressions from fans against big, strong, Black male wrestlers like Powerhouse Hobbs. As a cultural industry, professional wrestling is not exempt from the cultural issues of the modern day. While some aspects of the industry may be pushing forward and others lagging behind, it is still necessary to examine how professional wrestling companies as well as individual wrestlers and individual fans can strive to do better and use their influence on the culture in a positive fashion.

Professional wrestling is oftentimes a complicated and misunderstood sport, with many choosing to write it off entirely instead of working to understand its nuances. But, by looking into the nuances of it and beginning to understand the politics that go into it, its role as a major cultural industry becomes clear. For many, it is an ideal blank slate for them to learn more about how consumers influence the cultural industries and vice versa. The cultural industries intersect with every aspect of daily life and it quickly becomes clear how this is true for professional wrestling when looking deeper into its most popular companies.