Food Friday: Parkway Bakery, the tavern “off” the green

As I cruised down S Norman C Francis Parkway, the route enticed me with its arching trees hovering above the cars, and the tall houses lining the streets having withstood years of weathering and habitation. I pulled into the parking lot at 538 Hagan Ave and curiously stepped out of my car with excited anticipation. The soles of my shoes ground against the gravel, and the sirens of freshly-fried seafood lured me into Parkway Bakery and Tavern. I would soon realize why so many others have undoubtedly enjoyed their delicacies since its establishment in 1911. 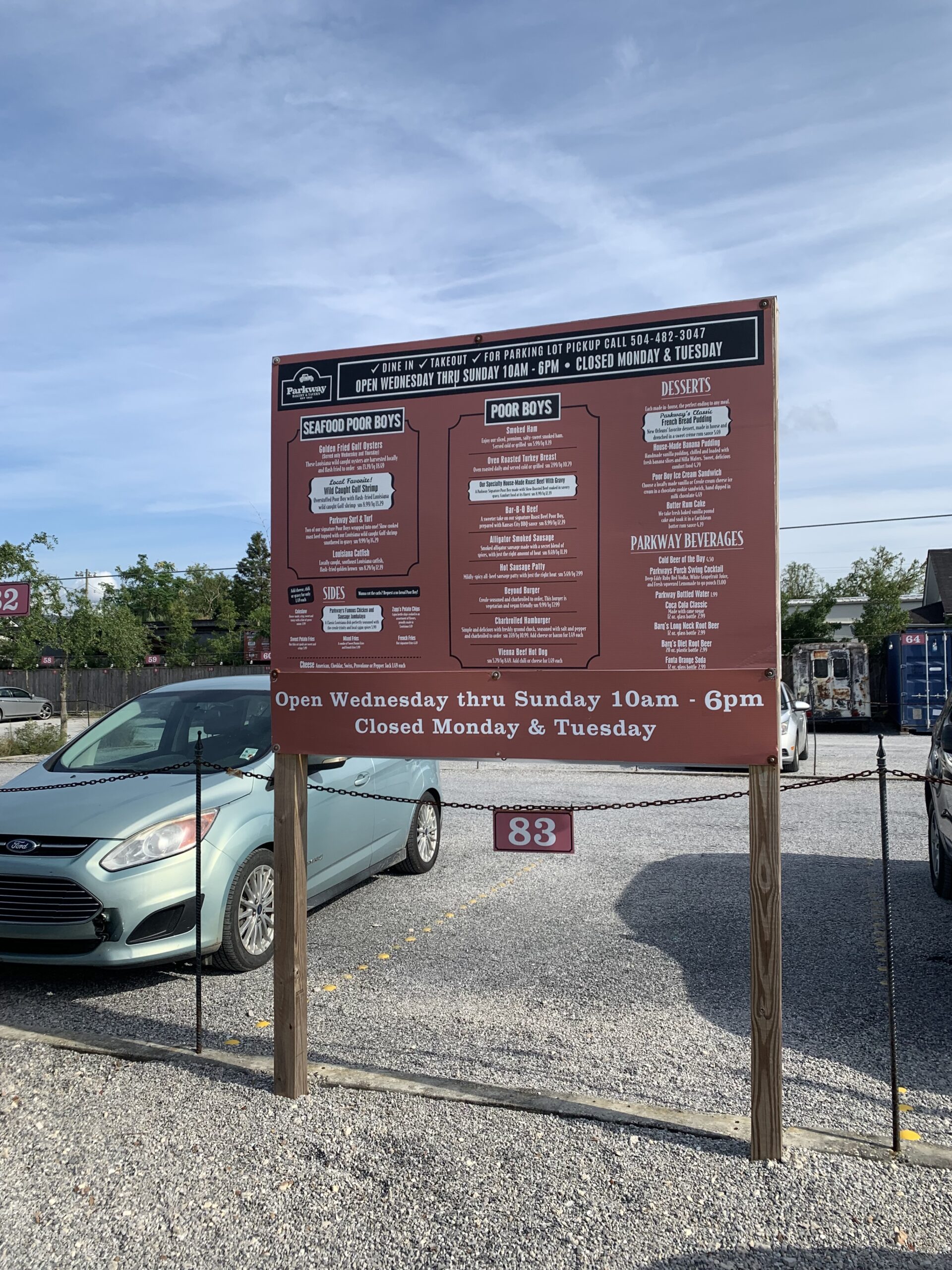 Menu in the Parking Lot of Parkway. (Photo by: Anastasia Thomson)

As I sat at the Parkway Bakery and Tavern for nearly two hours, I realized that the enforced rules, or lack thereof, is what allows this space to attract many customers. In observing those around me, no one was using their cellphones. Where our phones never let people forget that we are present in multiple spaces, this environment demonstrated community regulation around electronic use. I, too, was conforming to this norm. Research suggests that “behaving in line with the norms enforced in the prevailing environment is a means of obtaining social approval from others, maintaining a positive self-concept and, consequently, generating a high level of subjective well-being” (Oarga). Although not imperative at the Tavern, constant use of one’s phone would be like going to a bar and the owner saying “sorry, we don’t drink here;” it wouldn’t make sense. While the Tavern fosters an alternative norm in opposition to most diners where I see constant use of cellphones, the norm of rejecting phone use persists. In agreement with Oarga’s words, this conforming to not using one’s phone at the Tavern allows the customers to fit in with the rest of the crowd in following the rules. Thus, the customer’s well-being and happiness is fulfilled in an unconventional manner. 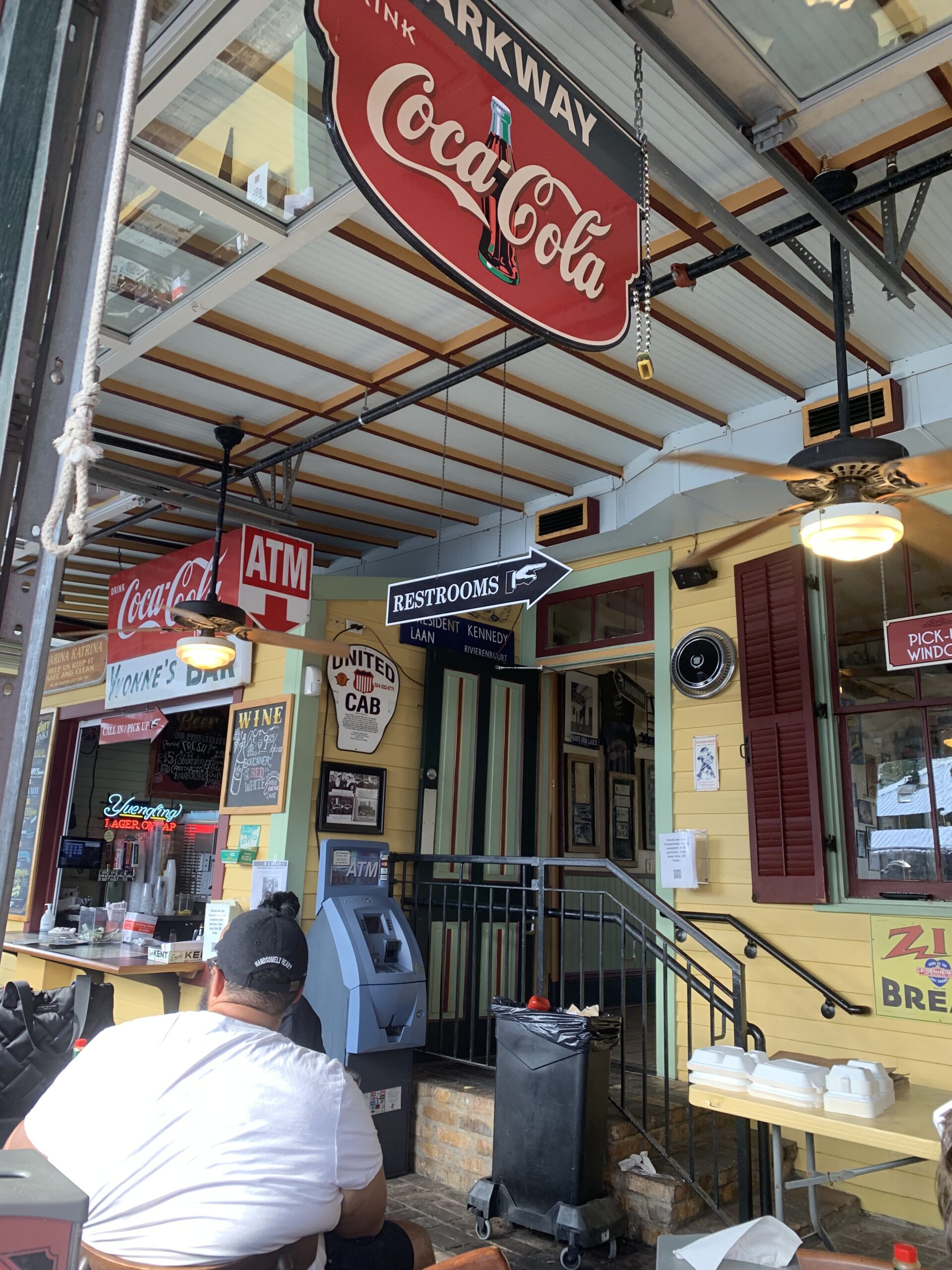 At this location, the loose organization of seating arrangements uniquely contradicts the traditional white fine-dining white cloths and tables meticulously set across the restaurant. Here, families of color, older couples, and even furry friends make appearances on the patio. Small, square tables are placed under the main awning of the tavern only a foot away from each other, with four chairs surrounding each table. Beneath the large, white tent, several collapsible plastic tables are aligned in varying directions with fold-able chairs tightly squeezed next to each other. When considering the usual layout of an area, “in large public spaces, individuals tend to select seats that are ‘anchored,’ which can be defined as being bounded on one or more sides” to establish personal space (Robson, 93).  On the contrary, choosing a seat at the Tavern doesn’t allow for individuals to be closed off. As I sat at the high-top counter, I recognized it truly was an open space for everyone to collectively eat together. Thus, the intimate layout and ability to choose one’s seat allows the Tavern to break from the norm of wanting to isolate oneself from others. At Parkway Bakery and Tavern, people are gathered in a more social, close environment. By hearing the bursts of laughter and observing the smiles on customers’ faces, it was evident that the casual structure permitted relaxation and gratification. 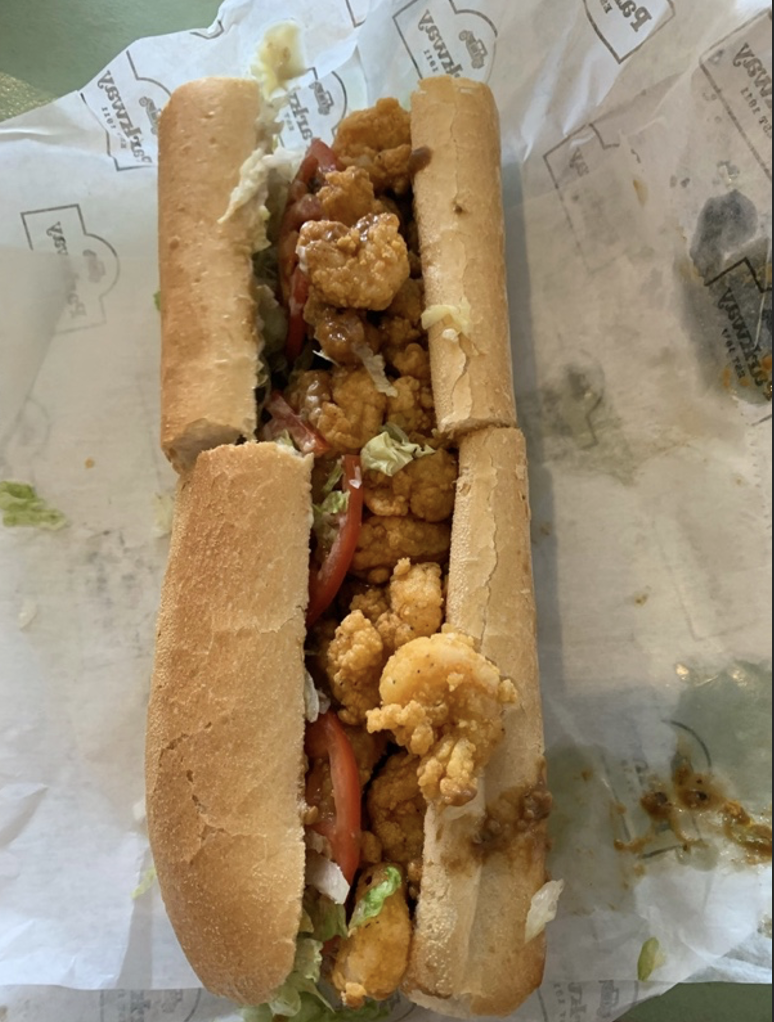 “Stashia, order up, Stashia!” a man’s voice shouted over the loudspeaker. As one may have anticipated, the food at the Parkway Bakery and Tavern constitutes a large component of why it is so enticing. Yes, the gravy and home-cooked Bar-b-q beef Po Boys are mouth-watering, but the absence of eating conventions constitutes a unique sentiment among the customers. Some let mayo and lettuce slip onto their laps or leave stains on the corners of their lips, while others grab a napkin and wipe their mouth between bites. When a baby with wide open blue eyes peered at me, he was either admiring how I devoured a bite, or noticed the lettuce that fell onto my chin. In considering table manners, they exist to “resolve themselves into a few important don’ts: Don’t chew with your mouth open, or talk with your mouth full. Don’t do anything that is offensively smeary or messy. Don’t attract attention by unpleasantness of either sight or sound” (Kaufman, 1). Whereas rules give organization and provide a sense of predictability, the lack of standards on how one consumes their Po Boy relieves the customers from constant worry of upholding standards and presenting themselves through “proper” means. Without utensils or table cloths, the informal nature of the space allows people to eat as messily as they want without worrying about “correlating utensils with successive courses” or “being observed” because those customs are not valued (Kaufman, 2). By not requiring complacency to strict consumption norms, the customers can purposefully enjoy their food with wide open mouths and sticky fingers. 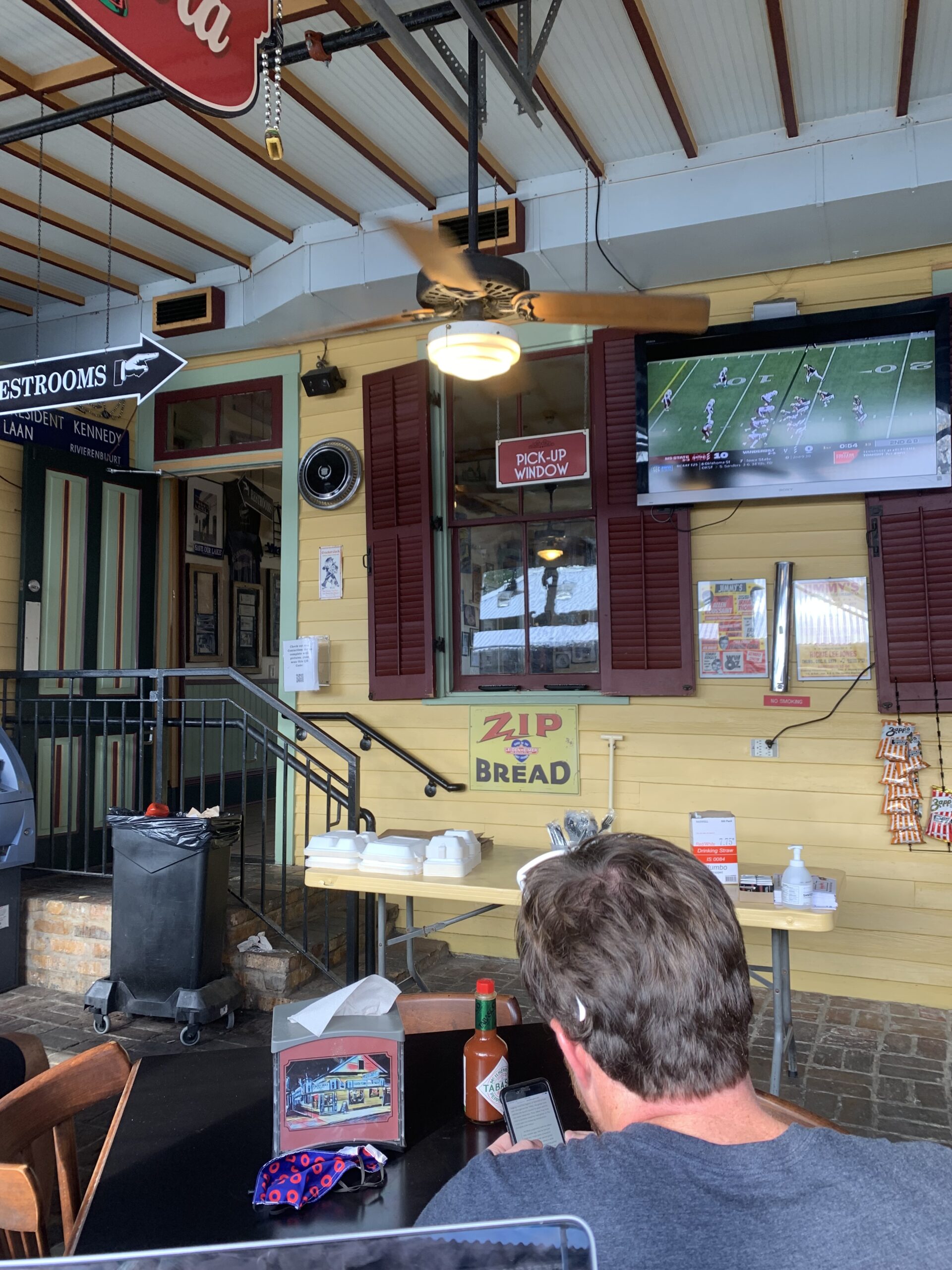 Along with the relaxed nature of the organization of space and the unconventional eating routines, the Tavern also provides a place where people are free of fashion standards. As I wore thrifted jean shorts and an old t-shirt with sneakers, not a single person there was making me feel self-conscious. The employees wore oversized Parkway Bakery and Tavern t-shirts with loose jeans and baseball caps. The man working at the ordering counter had on a Knicks hat with his white hair flowing out the bottom. With dressing norms, “If we would truly seek the spiritual, should we tarry so long getting dressed? How can we take ourselves to be approaching a deeper reality, or higher ideals, by repeatedly changing our clothes and our face?”  (Hanson, 112). The Tavern thus allows its employees and customers to not spend time on being superficial, and rather break the rule of dressing up to seek approval. As everyone sported large t-shirts, baseball caps, jeans, minimal makeup, and sneakers, it was clear that high fashion expectations did not exist. While “there is still the assumption that a right way of dressing can be found and, once found, sustained,”  the customers were granted the freedom of expression and to be themselves (Hanson, 109). But, in a paradoxical way, they still dressed similarly; just not in a way that comes with high expectations and diplomatic opinions. The Tavern is able to cultivate this norm by setting an example with their employees to promote a casual, comfortable environment which in turn makes for happy customers.

While spending time at Parkway Bakery and Tavern, it was understandable that in many ways, this setting allows its customers to break the conventional norms, and follow the alternative, in order to feel calm and content. Without signs to direct anyone, people knew to stand in line near the tall moveable counter, sit themselves where they wanted, and grab their food near the checkout when their name was called, customers were still conforming to standards. As one man mistook me for an employee in asking where to go to order and sit, it was easy to pick out who knew the flow of the place and who did not. Despite the Tavern existing outside of structured, daily routines, it is still a place of alternative conformity. Everyone carries out similar actions, but in their own way. Thus, it is still apparent that “conformity with social norms… suggests that external rewards, in the form of social approval and recognition, might be important for deriving emotional rewards from helping behavior” (Oarga). While eating messily, dressing casually, and seating one’s self along a plastic table break the patterns of formality, the Tavern is able to foster a space where people are comfortable and free to be themselves. I finally waltzed out of the Parkway Bakery and Tavern back to my car, with a full stomach and giddy feeling; this is the place to be.

Life Quest(ions): How can theatrical art aid in self-discovery
Theater and Dance