Editor’s Note: Taking a page from David Foster Wallace’s “Consider the Lobster,” writers in Kelley Crawford’s Alternative Journalism class at Tulane University chose objects that are rather ubiquitous. Then, they dove into the symbolic narrative those objects tell. Up for this Halloween week in the “Consider the _____” series is Halloween decorations. 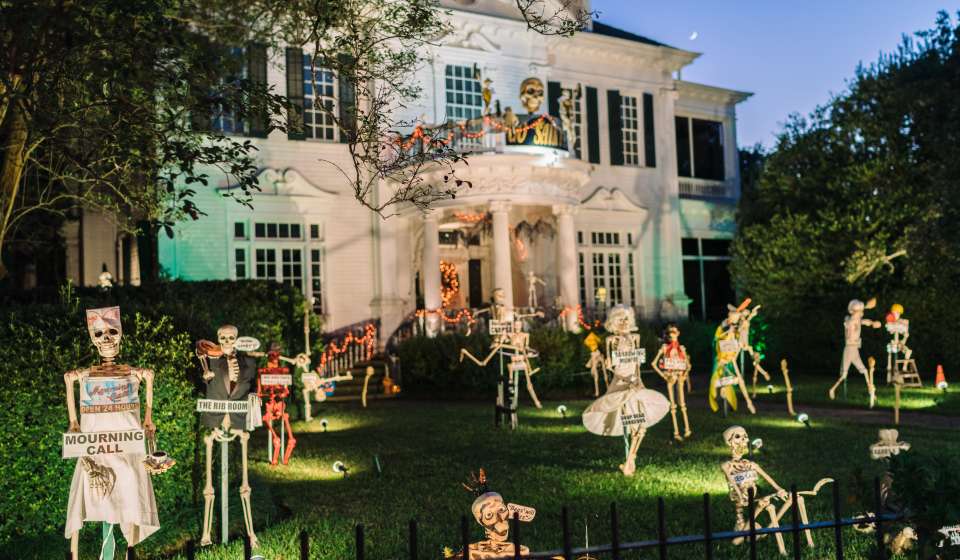 Driving through the streets of New Orleans, Louisiana on any given October afternoon is likely to distract a passerby from the trials and tribulations taxing their mind that day. Each house tells a different story. Whether it be a skeleton cast of Hamilton spanning the lawn of the white-paneled house on Saint Charles avenue, or the pumpkin lights strung across the billowing Spanish moss covering the house on Magazine street, New Orleans decorates for Halloween like they were born to do it. In a sense, they were.

Holding the title “the most haunted city in the world” puts pressure on a city to perform for the most haunted holiday of the year. In the small city of New Orleans there lives fifteen Halloween stores, twenty two candy stores, and three famous haunted houses. Each one of these stores is guaranteed to sell out by Halloween, as New Orleans citizens decorate their lawns in preparation for the celebration. Unlike some other cities throughout the country, New Orleans does not have one concentrated block or street that is famous for these decorations, rather a plethora of skeletons, pumpkins, and ghosts engulf the city from top to bottom. 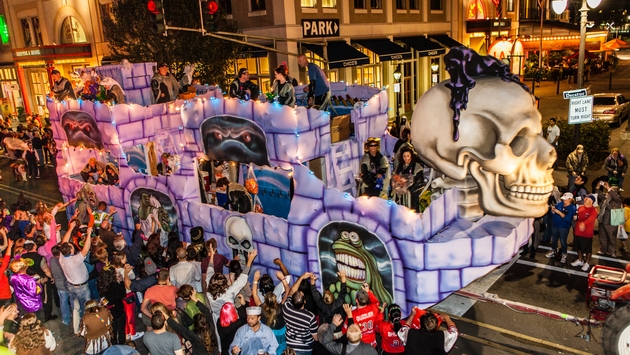 These decorations are the appetizer to the main event, however. They serve their purpose to give New Orleanians a taste of what is in store once the holiday approaches. Approximately 180,000 visitors are drawn to the French Quarter per night during Halloween season, where Halloween music bellows through saxophones, the renowned Krewe of Boo parades through the streets, palm readers search for the future, and guides stand on the corners of streets, beckoning Halloween goers into houses with stories of horror. New Orleans has no other option than to go to these lengths, however, as an average day in New Orleans mirrors the Halloween of a neighboring city. A Wednesday in New Orleans consists of tourists flocking to the infamous plantation mansions to embark on ghost tours, swarming to the enticing tarot card readers in Jackson Square, and parading down Bourbon Street with a “voodoo” cocktail in hand. Yet, while New Orleans was born for Halloween, the understanding and significance behind these decorations is often lost in the theatrics of the production itself.

Much of the reason New Orleans holds the title for the most haunted city in the world, is due to the history of the land and the tragedy that accompanies it. In turn, there is more than meets the eye to the porches full of fog machines and spirits inviting trick-or-treaters on Halloween night. The significance of these props date back to around 2200 BCE, when the land known as New Orleans today came to be. Native Americans inhabited this land for 1300 years before Jean-Babtise Lemoyne, Sieur de Bienville claimed it as French territory in 1718. After claiming this territory, the French massacred the Native people of the Chaouacha tribe living there, in the baseless fear of the potential of an uprising against the French. Many theorize that lingering spirits of this historical mass murder still live here due to their inability to make peace, a dishonorable significance which is often lost in the excitement of the spooky sound machines, and pop-up spirits.

A staple of this season additionally are the white cloth ghosts that decorate countless trees across town during Halloween in New Orleans, highlighting the abundance of ghost tales and experiences unique to the city of New Orleans. The realities behind these ghosts, however, paint a less than celebratory picture. In a country with a uniquely vile and abhorrent history of slavery, Louisiana is known as one of the most violent and cruel states for a slave to have existed. During slavery, Louisiana incorporated a clause into their constitution to legally dehumanize slaves, stating that “the master may sell [a slave], dispose of his person…[and he] can do nothing, possess nothing, nor acquire anything but what must belong to his master.” The correlation between these years of dehumanization and prevalence of ghosts today is not purely coincidental. Many of the spots celebrated as the most haunted places in the city, have connections that tie back to this shameful history.

LaLaurie mansion in the French Quarter (Photo from: Wikipedia)

Walking into places such as the LaLaurie mansion in the French Quarter, the cold chill upon entrance proves inescapable. While tour guides romanticize the thrilling and intoxicating tales of the crazed vengeful wife Delphine LaLaurie, the racism and dehumanization at the base of these stories is often lost. Delphine and Louis LaLaurie lived in New Orleans in 1834, and like most wealthy white families in the South at this time, they owned slaves. One morning, a fire broke out in their kitchen. What the firefighters found was “so horrible that [they] could scarce look upon it. The most savage heart could not have witnessed the spectacle unmoved” as reported by the abolitionist publication The Liberator. The LaLauries’ nine Slaves were found chained, horribly mutated, starved, and abused, unable to escape this fire. Today, the ghosts of these abused people are said to linger in this mansion and countless stories of seemingly paranormal activity have been shared throughout the years. While New Orleans capitalizes on these shocking ghost stories, especially during Halloween, author Tiyla Myles, notes that women like Delphine LaLaurie were not rarities in the slave society of Louisiana, in which 331,726 slaves were imprisoned at the time. Instead, “historical evidence suggests that she was among many in the New Orleans area and greater South who treated African Americans like chattel, and often brutally so.”

In minimizing these tragedies into backdrops for blow up ghosts, and cartoon spirits, writer Elizabeth Garner Mazari notes that the guilt becomes historically absolved from New Orleans slaveholders and the tourist industry for “committing or sensationalizing acts of racialized violence.”

Not only does this erasure invalidate the historical oppressive experience of Native American and Black people in New Orleans, but it simultaneously erases the current oppression experienced in New Orleans today.

As Author Rebecca K. Shrum explains, these exaggerated ghosts and dramatized stories allow the maintaining of a safe dis­tance from history, which permits spectators to imagine the horrors of slavery while avoiding facing the consequences of such accounts. Often these stories tend to center dazzling, thrilling tales that promote racism. Stories and Caricatures of sexually predatory “Jezebel” slaves, comforting “Mammy” slaves, or voodoo priestess slaves full of witchy black magic distort historical truth and undermine the dignity and value of black history. Ashley Rogers, the Whitney Plantation Museum Director, notes that while Native American massacres and slavery do haunt the history of this country, this invented gory and fantastic narrative is easier for people to swallow than the “everydayness and horror of American chattel slavery.” In turn, this prevents any progress in the future. As Toni Morrison famously remarked, “Racial ignorance is a prison from which there is no escape because there are no doors,” meaning, if we ignore this racist past, there is no hope for a change. The past informs the present, and the present informs the future.

While the ghosts hanging in the yard do not claim to be personally responsible for a lack of justice and recognition of the realities of New Orleans’ past, they offer an insight into why 77% of people searched and arrested by New Orleans police are Black, why 33% of Black New Orleanians are without healthcare compared to the 16% of White New Orleanians without healthcare, why Black students in New Orleans are twice as likely to be suspended than their White peers, and the countless additions to this list of systemic racial inequalities existing in New Orleans today. These realities reflect Pulitzer Prize winner Taylor Branch’s sentiment emphasizing that in avoiding the realities of this racist history, today’s systemic inequalities are the result of “50 years of trying to avoid and hide that subject.” 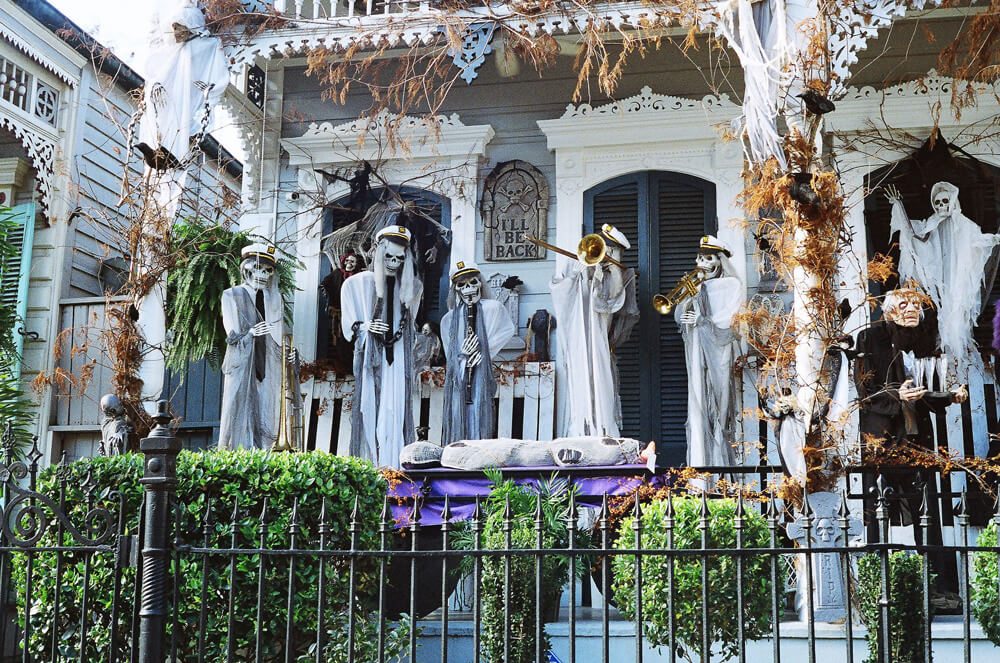 While a spectator would be remiss to not appreciate inscriptions of “Here lies Mozart, decomposing” or “Don’t make me come up there!” on pop-up headstones littered across yards during Halloween, to recognize the history that led New Orleans to become a hub of Halloween frenzy is equally as important. If the city as a whole fails to do so, rather than celebrating New Orleans, the community is largely disregarding the true ghosts of the past that are still with us today.