Death: The beauty of mourning with strangers

Streets flooded with people. Decorated umbrellas. The bellowing sound of blaring instruments. These descriptions may evoke images of parades, but in reality, they are the things I witnessed when I sat down to watch YouTube videos of Jazz Funerals in New Orleans. Immediately, it was evident that this is no ordinary way to mourn death.

I watched the funeral of Uncle Lionel Batiste, a decade-long member of the Treme Brass Band. In the beginning, people crowded around the funeral home outside, making a path for the closed coffin to be raised and carried outside slowly. Following behind them was a group of people coming from inside the service, united through holding hands and wearing matching shirts commemorating the life of Lionel. As they continued down the pathway, still following the raised coffin, the crowd kept growing by hundreds. The streets were soon flooded with people; family, friends, and even strangers raising their decorated umbrellas, lifting posters honoring Lionel, and even using their phones to capture the liveliness of the moment on video. Streets flooded with people for the jazz funeral of Uncle Lionel.

What started as slow and upsetting soon turned into an upbeat celebration full of dancing. While dancing might seem like a peculiar component of a funeral, studies have actually shown that physical movement leads to the release of dopamine, serotonin, oxytocin, and endorphins. As a result, this dancing contributes positively to the overall grieving process. In addition to the dancing, people were holding hands, encouraging those around them to dance, and leaning into one another (perhaps both physically and emotionally). This unity can be productive and helpful in some of the saddest moments in one’s life. Poor social support has been linked to depression and the altering of brain function that increases risk of alcohol use, and cardiovascular disease. In a time when emotions are high, it is important to know you’re not alone. Lucky for those mourning the life of Uncle Lionel, there was no end to the crowd in sight.

I’ve attended a funeral in a city very different from New Orleans — Boca Raton, Florida — but still saw firsthand the impact that community can have on the grieving process. I knew that the funeral was going to bring in big attention from the media, both locally and internationally. But this was a small town in South Florida, she was Jewish, and she was only fourteen. I was expecting the traditional Jewish funeral: private, symbolic, and followed by rituals such as sitting shiva and leaving rocks at her gravesite. I was not expecting to feel the support of strangers in my community.

I was wrong. The room was packed with over 1,000 people, well past capacity. Standing up on the stage to deliver my eulogy, I raised my head upright for what might have been the first time that day and immediately felt an indescribable rush as I saw the crowd. As my eyes gazed over the people in the room, I wasn’t surprised to see her family in the first few rows, followed by her entire dance team, and her classmates a few rows back, too. But as my eyes traveled back further and further, I was shocked to see a flood of strangers in the far distance, followed by a crowd of people standing due to the lack of enough seats and even a line out the door of people who couldn’t fit in the building. It seemed as if the entire community showed up.

As I was about to speak, I had a lump in my throat that I thought was going to prevent me from being able to spit the words out of my mouth. I began the eulogy soft-spoken with a crack in my voice from all of the previous crying. But, after looking at the crowd and thinking about how many strangers were there to honor the life of my best friend, I felt a sense of pride that gave me the courage to finish out the eulogy with a strong and powerful voice. In a research study focusing on funerals’ overall impact on the mental health of the bereaved, “low funeral attendance was perceived by relatives as a lack of social support, while high funeral attendance was supportive, and remained helpful for years afterward.” This rings true for me; thinking about how the entire community was recognizing how incredible my best friend was and came because they, too, were impacted by her life gives me a sense of comfort that has helped me get through some of the lowest points since then. I imagine this is what it feels like when hundreds of people, both familiar and unfamiliar, fill the streets in jazz funerals.

I felt the strength and support of the community so deeply in this moment, and these strangers — whether they knew it or not — helped me feel some peace for the first time in five days. Had it not been such a public tragedy, I imagine her funeral wouldn’t have been filled with hundreds of strangers, but it was the comfort of strangers from all over the world reaching out to me that never let me feel alone and helped me move forward in the following months. Similar to jazz funerals, I always had someone in sight. 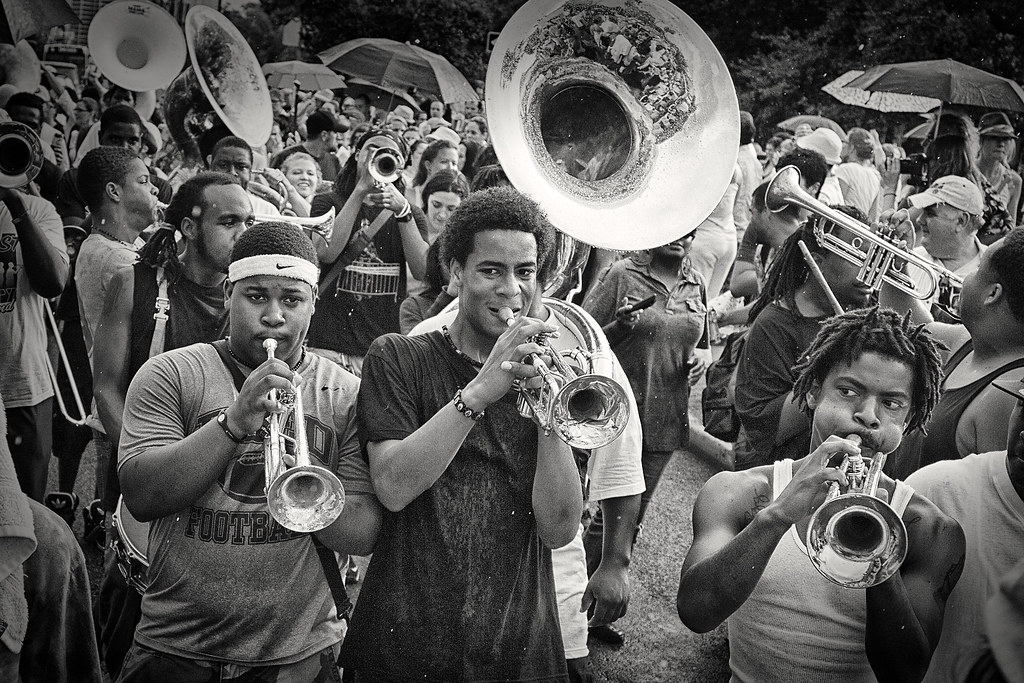 Public tragedy or not, jazz funerals are still full of random community members there to honor, celebrate, and pay their respects. After seeing how the impact of community helped me in my quiet, small hometown, I have come to admire the way that New Orleanians thrive off of one another to get through difficult times.