Editor’s Note: Nola 2 Angola, which organizes an annual bicycle ride to Angola Prison to support and fund the Cornerstone Builders Bus Project, which connects families to their incarcerated loved ones, is happening October 17-19, 2021. In honor of that organization and the work they do, we’ll be running pieces focused around the prison industrial complex and those trying to fight against it. We’re also looking at the hidden factors that live right before us, such as the canvas strap.

Taking a page from David Foster Wallace’s “Consider the Lobster,” writers in Kelley Crawford’s Alternative Journalism class at Tulane University chose objects that are rather ubiquitous. Then, they dove into the symbolic narrative those objects tell. Up next in the “Consider the _____” series is the canvas strap. 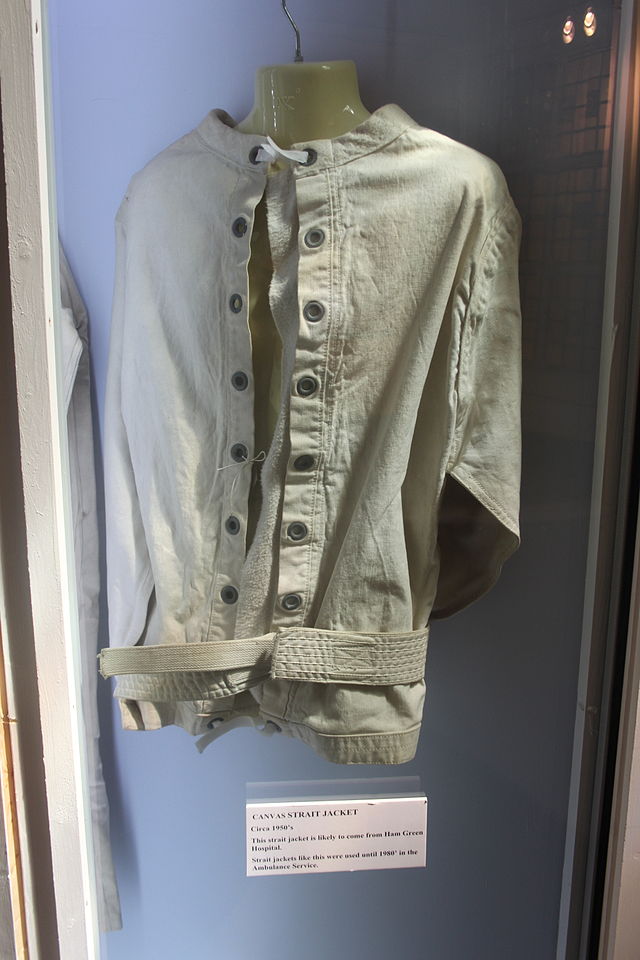 A straight-jacket always has more meaning in its threads. (Photo: Wiki Commons)

When you tightly weave thick yarns of cotton together in one of the most basic of weaving patterns, the plain weave, you create canvas. Canvas is no stranger to nearly every industry in the United States; boats could not be propelled without their canvas sails, Converse sneakers could not have taken the American fashion industry by storm if it was not for their highly regarded canvas lining, and renowned canvas paintings, such as Starry Night by Vincent van Gogh and Weeping Woman by Pablo Picasso, would not even exist. As such a versatile material, canvas also finds itself in less highly regarded environments, one being in prisons across the country. In prison, canvas is not used for fashion statements or artistic hobbies. Its use perpetuates the inhumanity of the incarceration system and is the medium that, both literally and figuratively, ties people down to a historically unjust system of punishment.

It was the early nineteenth century that witnessed the birth of what is known as prison. As a system rooted in punishment, prisons were “intended to deter people from committing crimes. People who were found guilty of various crimes would be sent to these penitentiaries and stripped of their personal freedoms” (“History of Imprisonment”). Buildings rose from the ground by the thousands across America for the sole purpose of confining people in cells until they have paid the price of their mistake. Depending on the wrongdoing at hand, the price paid varies. Prisons and jails are commonly confused as the same thing, however, jails hold inmates who are awaiting trail or hold short sentences while prisons serve long-term inmates. Prisons can be state or federally run and differ in levels of security, the most serious offenses being sent to maximum security prisons. Oftentimes, a slap on the wrist by legislation is not enough to deter a person from a second imprisonment; the vicious cycle of confined punishment, freedom, and confined punishment is never-ending for some, as 83% of prisoners are arrested again within 9 years of their original conviction. In a conversation with Laurie Jubelirer, a criminal defense lawyer in Philadelphia, she says, “The system inside the prison is not doing anything to educate, support and help them  to make different choices so that they don’t get arrested again. It’s common that my clients who have been arrested once are arrested subsequent times. This could be due to the police being biased against a client, which sometimes has to do with race.” She speaks about how there is a great bias against Black people while driving or walking, who are often stopped by the police who wrongly assume that they are doing something illegal. “It is not always that there is more crime, it is the system that has failed.” It was only the lucky ones that didn’t fall victim to the aged criminal system by dying a preventable death, one at the hands of racism and a system that is innately problematic, seeing humankind as incapable of rehabilitation.

Shawn Duncan is not a lucky one. The Orleans Parish Prison in New Orleans, Louisiana is an infamous hoarding ground of individuals charged with petty offenses, such as traffic violations or municipal charges, waiting to be stamped with the permanent mark of being in the prison system. It was August, 2001 when Duncan arrived at the Orleans Parish Prison on unknown traffic charges. After notifying officers that he was on drugs, he was sent to the Medical Center of Louisiana at New Orleans and was diagnosed with a drug overdose and suicidal ideation. Back at Orleans Parish Prison, Duncan was introduced to the five-point restraint, a contraption of canvas straps that buckle tightly around an inmate’s wrists, ankles, and chest. Tied down and unable to move, he laid in the psychiatric ward for close to a full 24 hours without appropriate water intake or medical attention. 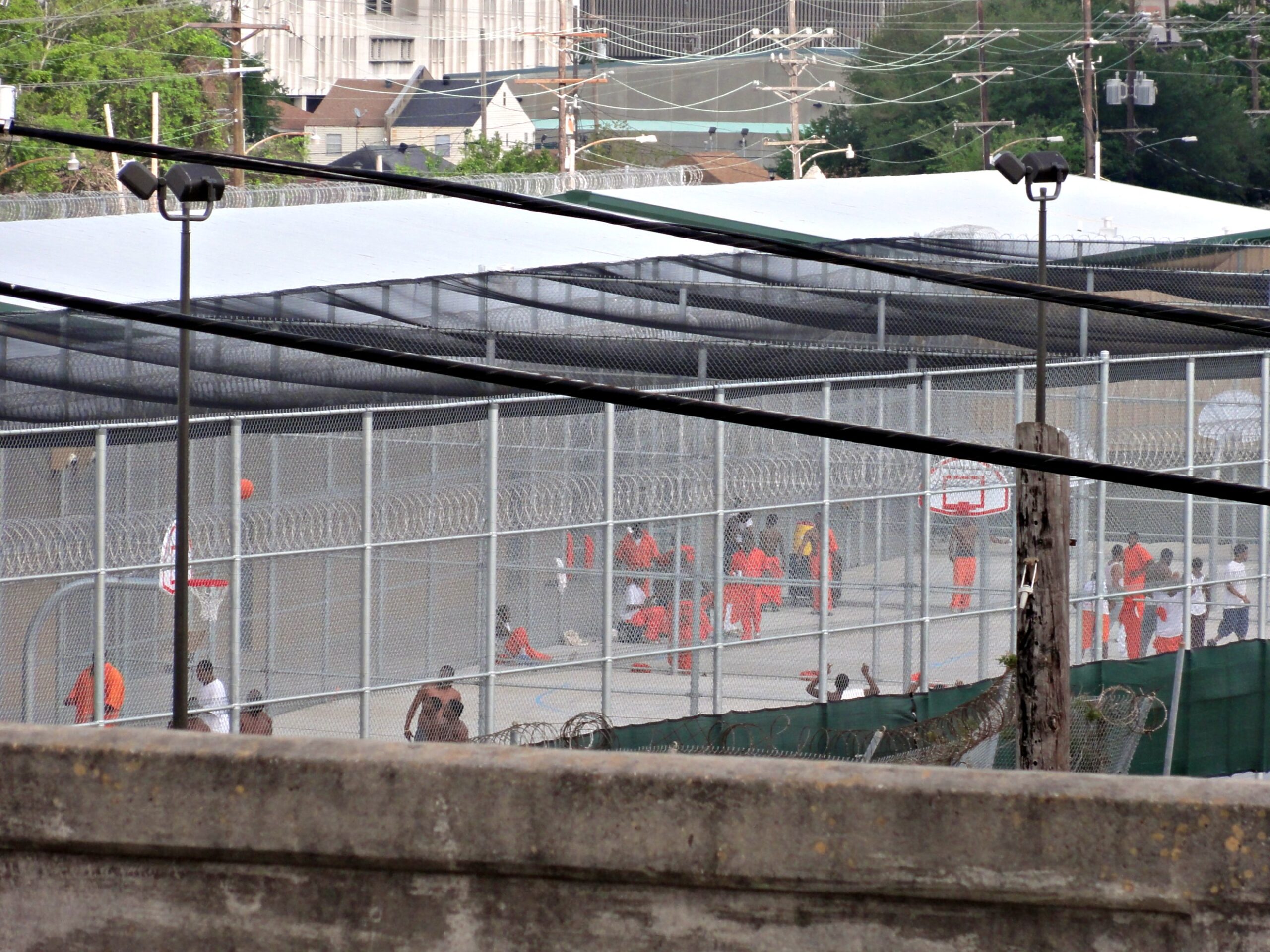 Inmates of Orleans Parish Prison during their outside time.

After being released, Duncan found himself back in the fateful canvas restraint only two days later. 12 hours into his unofficial death sentence, a physician decided to keep Duncan in constraints for an additional 12 hours despite providing no medical explanation or reasoning. Still without any fluid intake, Duncan was examined by a third physician who decided to keep Duncan restrained without any time limit. For over 42 hours without water, bathroom access, proper medical examination, regular deputy check-ins and in canvas wrist, ankle, and chest restraints, Shawn Duncan, a healthy 24-year-old black man, died.

Duncan, presenting no direct threat to the safety of those in Orleans Parish Prison, died while strapped in canvas shackles tying him down to a system that was built to disproportionately demean Black men; people who are seen as inherently dangerous and lesser based on an outdated, racist mindset adopted and passed on by old slave-owning white men we read about in textbooks, but who are people nonetheless, ones with thoughts, feelings, and rights. This is a pure testament to the cruel reality of the American prison system. Orleans Parish Prison has a history of fostering conditions no human should live to withstand. Pregnant women are shackled during labor, deputies beat inmates until they no longer have a pulse and emergency medical appointments are withheld until unbearable pain or death convinces prison authorities of the seriousness of the matter. The Orleans Parish Prison is representative of the entire United States, a nation burying modern slavery by masking it as the modern mass incarceration system. We pride ourselves upon the passing of the thirteenth amendment, but what good is legislation when we’ve created a massive loophole? The thirteenth amendment reads, “Neither slavery nor involuntary servitude, except as a punishment for crime whereof the party shall have been duly convicted, shall exist within the United States, or any place subject to their jurisdiction.” Slavery and involuntary servitude are thus legal in the United States as a punishment for crime. It would be ignorant to assume that America has overcome its past immoralities and that this loophole is not being put into practice.

Angola, a penitentiary in Louisiana, sits on land that was once a slave plantation. In 2020, 154 years after the passing of the thirteenth amendment, Black prisoners are monitored by men on horses while they pick cotton as fast as instructed or are threatened with punishment in “the hole”, where inmates are confined and occasionally tear-gassed. This modern form of slavery ties this country back to the underlying idea that some people are innately less equal than others, something we claim we conquered a long time ago. However, Black people are nonsensically being buckled in canvas straps to be punished instead of rehabilitated. Before a change is made, the problem must be identified. Black people are not only being restrained by tightly buckled canvas straps, they are being strapped down by a system that weaves the cotton yarns of systemic racism into every aspect of society. Black people are metaphorically strapped down in a canvas five-point restraint when they teach their children how to act when in the presence of the police out of fear of brutality or an unjustified arrest. Black people are strapped down when their youth are four times as likely to be confined compared to white people. Black people are strapped down when their rates of mass incarceration are the highest of any other race. Black people are strapped down when being previously incarcerated disproportionately penalizes them when trying to get a job. The legislative five-point restraint ties Black people to a bed of history that must be moved past. Canvas shows up in everyday life unbeknownst. Even when we’re painting on it or wearing it, we give it little consideration or thought. Despite being so negligible in day-to-day routine, it represents an atrocity of great urgency. We must give more attention to the injustices taking place at the hands of the modern American prison system and of tightly pulled canvas straps. It is time to listen, learn, and be cognizant of the importance of advocating for things we may not be directly affected by. It is time to unbuckle the canvas straps.

Brooks, A. (2019, June 17). Breaking Down the Different Types of Prisons in America. Retrieved November 21, 2020, from https://www.rasmussen.edu/degrees/justice-studies/blog/different-types-of-prisons/

History of the penal system. (n.d.). Retrieved November 15, 2020, from https://howardleague.org/history-of-the-penal-system/

Stevenson, B. (2019, August 14). Why American Prisons Owe Their Cruelty to Slavery. Retrieved November 15, 2020, from https://www.nytimes.com/interactive/2019/08/14/magazine/prison-industrial-complex-slavery-racism.html