Editor’s Note: As we remember Chadwick Boseman, who died on August 28, 2020, we also say “Rest in Power.” A phrase that Tyana Lewis looks into. 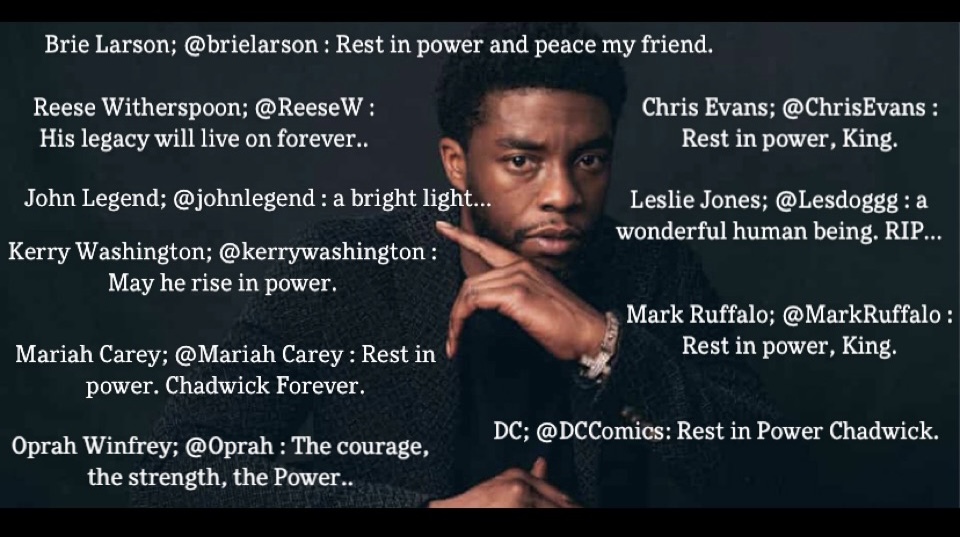 A compilation of those wishing Chadwick Boseman a “Rest in Power” (Collage by: Tyana Lewis)

My phrase “Rest in Power” is not used daily. Here’s how I’d explain its use: the people who were in power just died and will forever be loved. It’s the idea of “literally rest in continued power.” With many people following or looking up to someone, if they die, people would post Rest in Power.

A perfect example is when Chadwick Boseman died unexpectedly on August 28, 2020, and this how that conversation would start:

When looking up the etymology of “Rest,” one of the definitions was “mental peace”; the sleep or intermission of labor is a good way to describe rest. This phrase has a very positive connotation with power, showing strength/might, ability and influence. Using the two definitions creates the meaning of the phrase clearly. Even though it seems very straight forward, this is my definition for this year: The people who were very influential and led us are now able to rest peacefully, away from this crazy world.

Both ”rest” and “in” were recorded before the 12th century, but they both could have also been recorded before 900. The two are very popular words and have been used for a long time.

The origins of “in” are not certain. It’s a simple word with a simple meaning that could have came from anywhere.