Phrase: “Beating Around the Bush”

My phrase “Beating around the bush” is used a lot in modern day language. It’s a phrase you use when someone isn’t telling you the whole story or exactly what you want to know. The phrase is mainly used during arguments or when someone is trying to get information. Usually, someone” beats around the bush” when they are avoiding a question or trying not to hurt your feelings; basically it’s when a person is not being straightforward. Although this phrase isn’t used everyday, it is something that most people hear at least once in their lifetime.

Here’s a scene of how my phrase is used: I asked my best friend how I looked in my brand new dress; he told me that he liked my shoes, but I didn’t ask him that. “The dress,” I said, trying to grab his attention; he started to talk about my new nail color. “Why are you beating around the bush?” I asked.

When looking up the etymology of the word “beating,” the word is mainly used in connection with violence or some type of victory. The meaning from the 13th century and the current meaning are exactly the same; however, the “beating” used in the phrase “beating around the bush,” vs the “beating” used to reference violence is not the same. Or is it? Is it a mental type of violence to not be straight-forward with someone (or yourself?)

When looking up the etymology of the word “around,” it shows that the word was rare in the 1600s. I’m pretty sure that the influence for the word has something to do with its meaning today because the definitions have grown overtime.
Finally, the word “bush” is Middle and Old English that describes a plant. This word is of German descent and came about in the 14th century. 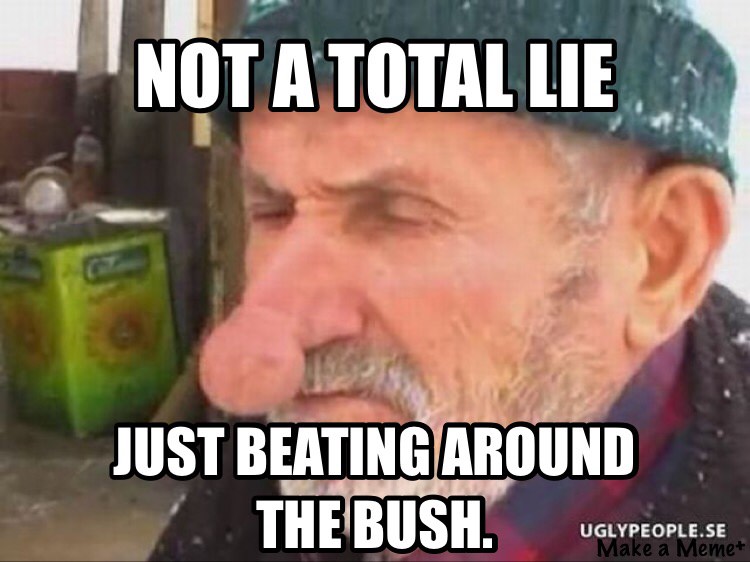 Beating around the bush is no better than lying! (Meme by: Na’Jai Finney)

In the 1600s, the word “around” was hardly used, which is odd. The word attested from 1776 in American English and gained definitions overtime.

Before people used the word “the,” Old English had about ten words to replace it. Another fact is that the word ” the ” is considered a Masculine pronoun (who knew? LOL not me).

In the past, then the meaning of “Beating the bush” meant to arouse birds from trees. The word is combined with French and medieval Latin.