Roller skating as A political activity

Fifty-seven years before women had the right to vote, they were equals in the skating rink. On All Saints Day, November 2, 1869, The Picayune reported that there were a “number of skaters on the floor, among whom were some 15 or 20 ladies.” At a time when women were never included, especially in something regarding physical exertion, this inclusion was monumental. The roller skates were cleverly marketed as an activity that young Victorian couples could partake in together, without needing chaperones or being seen as inappropriate.

Roller skating has been popular in New Orleans since the

invention of the quad skates in 1863. Since decades before this All Saints Day celebration, roller skating was inextricably linked to Black social movements. In 1892, Homer Plessy was arrested in New Orleans for violating railway segregation. Plessy became the defendant in the iconic case Plessy vs. Fergusen, which established the “separate but equal” statute as constitutionally valid. Roller skating rinks immediately sparked racial conflict once they were constructed, as white rink owners barred Black skaters from their facilities and black communities fought back through protests and demonstrations. In fact, one of the first sit-ins in the United States was technically a skate-in at a local rink.

During the Civil Rights Movement, when schools and government buildings were being desegregated, white people advocated for segregation to continue within the walls of the rinks. “Urban” and “adult” themed skating nights that targeted black skaters essentially reinforced the segregation that had always existed. A new version of separate but equal. In the movie United Skates, one scene shows an elderly skater talking about protesting outside a local rink in his youth for the right to skate and being attacked by a local Klansmen.

Imagine, it’s “theme night” or “adult night” at the local roller skating rink. Outside, there is a heavy police presence and possibly white protesters. To enter, one has to go through metal detectors and be patted down, but once inside, the excitement is palpable. The tension and animosity from outside are nowhere to be found. Inside is a safe haven. Kids with no established childcare are no longer out on the streets, they are inside a secure building practicing their athleticism and expression, while being embraced and supported by their peers and elders. Childcare thus becomes a community task. People laugh, shake hands and skate together, creating new regional styles. Members of rival gangs can be seen side by side. Outside of the rink, they may want each other dead, but inside, they are family. Rappers, DJs and other black artists played at roller rinks on “theme night,” simply because they were not allowed to perform at other venues. Themed nights became a safe haven for black culture and black music, and eventually allowed for the birth of hip-hop as a new musical genre. A long list of iconic artists such as Dre and Queen Latifah began their career performing in roller rinks. From these humble beginnings as DJs for passionate roller skaters, hip-hop and hip-hop culture emerged. 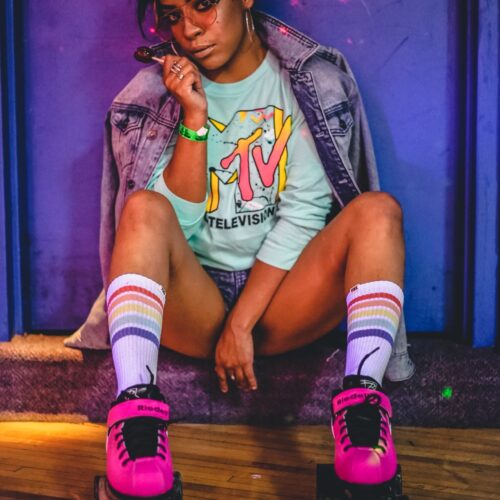 My grandparents met while ice skating in Iowa.

Back to school week: If only teachers were treated as well as babysitters
Education