In 1976, New Orleans architect and fine arts professor, Frank Hayden, (7) unveiled the abstract sculpture of Martin Luther King Jr.. Hayden’s designs were intended to honor and pay true homage to the national hero. Instead of the expected full-length pose of the Civil Rights leader, Hayden created a 10-foot, bronze, egg-like sphere with hands reaching out, a bullet hole mark, and some of the King’s most famous quotes wrapped around the inside (2). Surrounding the sculpture are benches also engraved with quotes from the famous speech. When the sculpture was first disclosed by Mayor Moon Landrieu in the Lower Garden District, it was considered controversial. Many people were not satisfied with the composition and physical appearance. But Hayden was confident that his work achieved the proper understanding and was not fazed by the criticism. He was and still is known for his abstract creations that reflect spiritual and societal concerns (7). Through critical thinking, one can clearly see that this piece of art is truly a representation and reminder of Martin Luther King Jr.’s drive to bring the people of America together and create a world of unity. 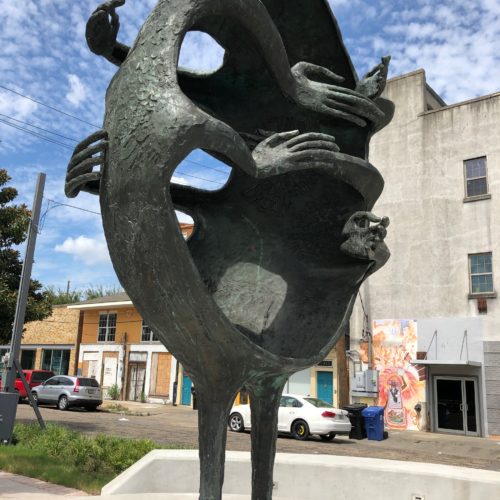 Martin Luther King Jr., to this day, is known for his lifelong quest to achieve peace and equality in the United States. He was able to accomplish what no other man could- advancing civil rights through the use of power without violence. In one of his many speeches, Martin Luther stated “I don’t want you to worship my image. I want you to remember the principles I stood for,”(2) and that is exactly what Frank Hayden did. Hayden took these embedded principles and transformed them into an unusual depiction and memory of King.

It’s important to think about why Hayden chose the shape of an egg to honor the life of Martin Luther King. There are many symbolic meanings of the egg that have been played out throughout history. Hugo Hiriart, a Mexican philosopher and writer, sought to explore the question of “what is an egg?” in his excerpt of, Creative Nonfiction No. 23 (12). Hiriart implicitly explains the relationship he has developed between a chicken and an egg. He draws parallels from the chicken and the egg to intentions and actions- the chicken being the intention and the egg being the action. He believes that the egg came first. Thus, if we think about how Martin Luther King valued life and growth, and about how Hiriart views the egg as pure and simple, Hayden’s use of the egg makes sense.

In addition to Hiriart’s beliefs, there are other critical representations of the egg to consider in relation to Hayden’s work and decision making process. The egg can represent the importance of Christianity and the idea of gifting. We know that Martin Luther King was a Baptist minister and held strong values in the roots of Christianity. We also, undoubtedly, know the great gift he left to our country.

Hayden further employed the egg because of its symmetrical sphere, offering no beginning or end, just like the cycle of life, as MLK too believed. Activist Bertrand Butler analyzes the structure by comparing the relations between the egg and chicken, just as Hiriart studied. Butler pronounced that the work “is an egg shape, but what comes out of that yolk is other chickens,” (8). In other words, as relating back to Hiriart, the design of the sculpture is a symbol of life and growth. Lastly, the egg-like shape was selected given that it has no sharp corners, only smooth edges. Thus, mirroring Martin Luther King’s nonviolent demeanors and actions. In total, the egg was an excellent choice for achieving feelings of religion, life, growth, and peace.

As we take a look at other details of the structure, the multiple arms reaching out of the egg-shape are certainly the focal point. The arms suggest that we, as a nation, should all come together, just as King preached. Arms are also a known symbol of strength and power. And they serve to protect us and others. The overpowering size of the arms represent two of King’s central motives: the togetherness and toughness of the people. If I had to guess, I would say each arm is about four times the size of the average arm. It is surely the first thing you notice when approaching the art, and it is even a bit confusing at first. The sculpture definitely requires an intense eye and critical analysis in order for the viewer to associate and connect each aspect with King. As noted, this was not the usual memorial piece the people were expecting, but after looking closely one can see that together all of the parts represent Martin Luther King’s ideologies.

Though Hayden’s sculpture embodies the meaning of life, there is also a bullet hole on the back of the egg. The bullet is large in size, but not as intensely shaped as the egg and the arms. This mark serves as a big reminder of what Martin Luther stood for and died for. It represents the assassination of a true legend fighting for the reconciliation of our country. It also represents Martin Luther’s inner strength. After analyzing each part of the structure, the statue without a doubt stands for and speaks to us to remember the joining of our society, our nation, of disparate cultures.

As Martin Luther King said, “Our lives begin to end the day we are silent about things that matter,” (9). What mattered to King was disposing of the ugliness in the world. This ugliness was the reason that people were not able to come together as a nation. It was the reason people were not all simple and pure like an egg. And this ugliness was the reason that people of color were not able to protect themselves with their “arms.” Although there is no man that can truly eliminate forces of racism, sexism, xenophobia, poverty, unemployment, inequalities, etc., King will forever provide us with the hope and belief to come together, the same way that the arms will forever remind us. His gestures have taught us the important and influence of perseverance and courage.

This statue along with another MLK memorial in New Orleans are not the only actions the city took to remember King. A year after his death, the city of New Orleans renamed approximately 35 blocks in his honor (8). These streets are a significant part of the annual celebration of Martin Luther King. On this day, the city gathers together to enjoy an incredibly organized festival with parades led by civil right activists. The parade routes pass by both of King’s memorials (8). Co-founder of the group Take ‘Em Down Nola, Michael Moore, affirms that “it’s these kind of community efforts that pay true homage to King’s legacy.” He continued on to say that “King fought so that black people would have access to resources. If none of that happens and you put a statue up of him, the statue has significantly less meaning,” (8). These actions, statues, and great measures taken throughout the world in King’s honor are created as everlasting tributes of great recognition of a great man.

Though it has been decades since Martin Luther King’s assassination (10), we know that his nomenclatures will live on forever. His achievements and legacy have created templates and models for social change to this day.  The civil rights movement and everything that has happened since have both encouraged and empowered other minorities to fight for their rights by coming together and organizing nonviolent acts. Martin Luther King Jr. will forever be a social change leader who successfully popularized the act of peaceful protests. His significance will always be deeply represented within the egg, the arms, and the bullet mark. Frank Hayden’s conceptual statue will forever stand to remind all of us of Martin Luther’s fight for freedom and equality up until his untimely death.