Footprints: Unframed but not alone with Etam Cru’s CBD mural

New Orleans is a city overflowing with vibrancy and culture, and it comes to define a piece of each of its inhabitants. ”Transplant in New Orleans” takes a tour of some of my favorite spots in New Orleans and shares some history and insight into what makes these places, and the city as a whole, feel like home to someone who has only lived here for a few years. In a time when everything feels a little quieter and more distant, I hope these articles remind us of all there is to love about living in the city that care forgot.

Located in one of New Orlean’s busiest areas, an image of a solitary man gazing out over the streets embodies the feeling of loneliness in a big city. The symbolism is powerful, and the message is more relevant than ever. The next time you are in the Central Business District, maybe take a moment or two to gaze at this work of art and feel at peace with the feeling of loneliness amongst others. Read about the background and significance of this mural in this article, originally published on February 5, 2020.

One of the best ways to exhibit the “alternative” in society is to express ideas, feelings, and emotions through an art form. Urban street art is extremely prominent in New Orleans, especially in terms of grand, large-scale murals painted throughout the city. According to Robert Sweeny in his editorial in Art Education (2013) he explains that “street art is contradictory: a form of artistic expression that resists institutional legitimacy while it simultaneously becomes more widespread, more accepted – an institution in its own right” (12). The project organized by The Art Council of New Orleans known as “Unframed,” is designated towards supporting visual street artists in hopes of exemplifying how art is transformative and imperative in urban communities. Presented by the Helis foundation, “Unframed” features 5 large-scale murals in the heart of downtown New Orleans. The “Unframed” exhibit, which includes 2 local artists, 2 international artists, and 1 mural created in partnership with the Young Artist Movement, has brought a vibrant and artistic touch to the buildings in downtown.

Etam Cru, a Poland-based duo is responsible for the mural located in the Central Business District at 600 O’Keefe Avenue. Known for their surrealist-tinged figurative pieces, Etam Cru’s murals often feature motifs from Polish culture. The O’Keefe Avenue mural depicts a singular man, demonstrating loneliness in a big city. The mural is located in one of the busiest areas in all of downtown New Orleans, situated two streets away from the Mercedes-Benz Superdome and the Smoothie King Center. In this densely populated area, it is rare to find oneself without another person nearby, but the man in Etam Cru’s mural is a young African American man in a hoodie who sits in a chair all alone while holding a mug. He stares at the viewer as the surrounding sounds of car motors humming and Saints fans cheering turn into soft white noise. As the man stares into the distance with no sense of urgency, stress or distractions, I reflect on how these features represent a sense of loneliness, which is ironic since this mural is located in such a populated area.

In the age of social media there is a stigma surrounding being alone; however, it is important to acknowledge that there is a difference between being alone and being lonely. The stigma of being alone implies isolation, friendlessness, and social incompetencies. However, being alone is not a bad thing. Being alone is an important tool in personal growth and character development. The dark shadows surrounding the man’s eyes in the mural accompanied with his mellow stare and calm demeanor suggests that he has just woken up. I am drawn to his mug filled with what I would assume is coffee, indicating that it is morning. There is no newspaper in the mural, no phone, and not another person to offer any alternative interruption to not only the mural, but to the man himself. 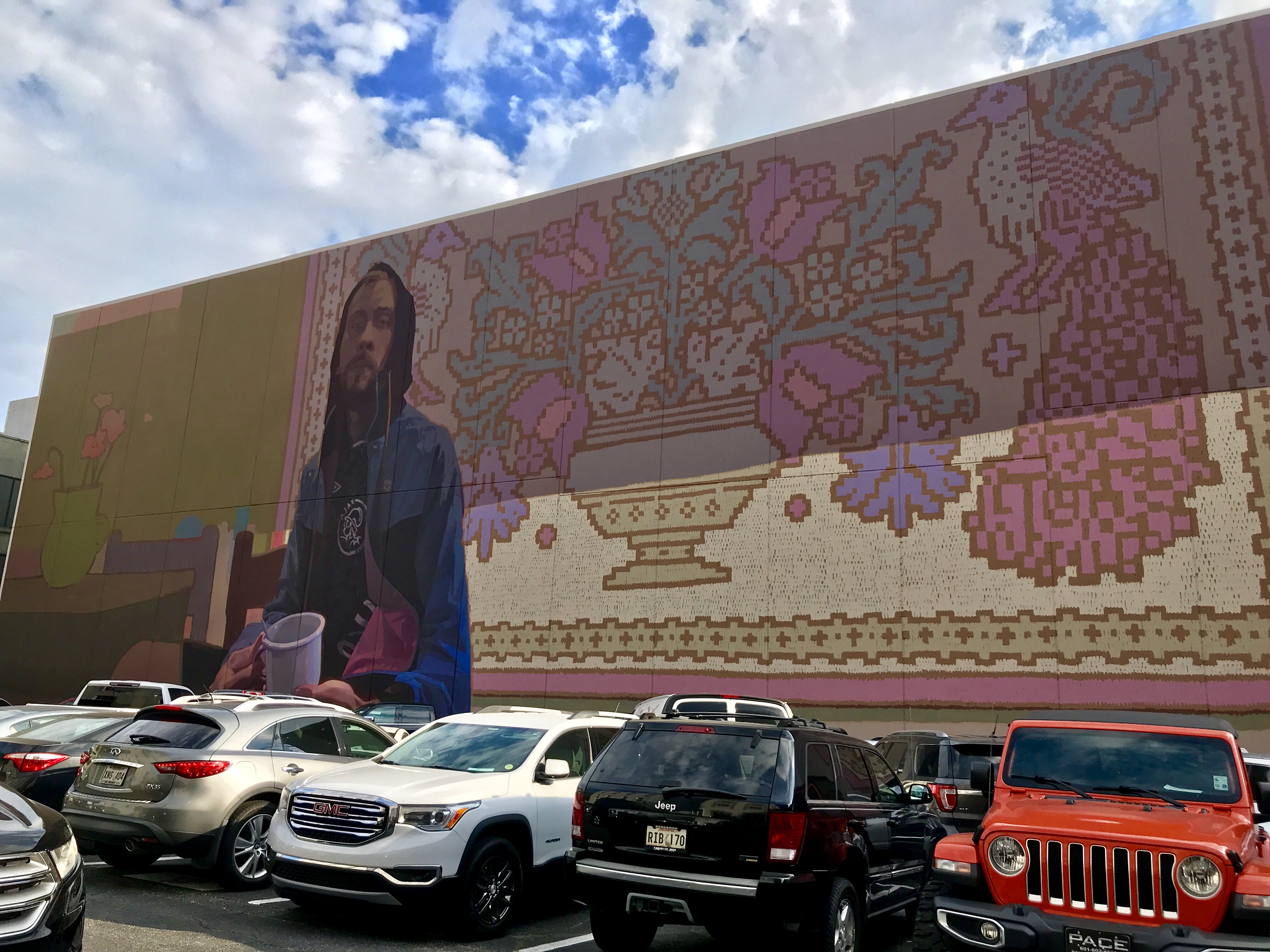 Constant communication is an integral part of social media, creating the impression that one is never alone yet they feel lonely. The need to feel connected, validated, or simply relevant prompts society to disengage from the real world and into one’s own virtual reality. Within this world of instant and absolute communication, unbounded by limits of time or space, we suffer from unprecedented alienation. We have never been more detached from one another, or lonelier. The mural is representative of the purest form of being alone without any virtual distractions. The purity that the mural depicts stems from the lack of electronics, the lack of other humans beings, and the aspects of nature which the subject is surrounded by. With the man in the mural being surrounded by other life forms that don’t interact with him, he doesn’t have to disassociate from himself. The exclusion of such features creates a sense of peace in the mural, relaying the message that it is possible to be alone without the desperate need for connection. He has a straight-lined mouth, so he is not frowning or smiling. He’s in a state of contentment.

Recognizing our generation’s struggle with being alone is important in understanding the mural and its message. Being alone is important in terms of self-reflection, learning to rely on oneself, and understanding the essential difference between being alone and being lonely. Loneliness “is the absence of a particular type of relationship such as an intimate relation, friendship, or a link to a network of friends with shared interests and concerns” (4). Whereas being alone is not having another person (whether it be in real life or virtually) with you, or in communication with you. Self- reflection is important in developing character, creating personal morals and values, and understanding one’s personal wants and desires. Without the influence of someone else’s thoughts, feelings, or their overall presence, being alone is key in our ability to exercise introspection into our character, actions, and motives.

To the man’s right in the mural, there is a tapestry-like image of two birds on either side of a flower-filled vase, framed with the pattern of a cross-like drawing alternating with a smaller square. Both of these shapes are painted in brown, contrasting with the lighter background on which they are painted on. Underneath this initial framework, the edges of the tapestry are painted with thick pink lines that are bordered with thinner brown lines creating a painted frame. Ironically, this piece of “Unframed” artwork includes a frame inside of it. The two birds that are perched on either side of the vase have long, pink feathered tails and smaller green wings that seem prepared for flight. In Andrew Lambrirth’s article, Painted, Sculpted and Stuffed: A History of Bird in Art, he explains how “birds are synonymous with flight, and as such are a potent symbol and embodiment of many of humanity’s hopes and dreams. They connote both the human and the divine spirit through their soaring freedom of movement, and their linking of earth and sky (often also water). Birds can represent our souls, or stand for wisdom and the power of thought.” Similar to birds and the freedom they experience through flight, the man in the mural experiences freedom from the effects of technology and social media through being alone. The lack of both technological and human disruption contributes to the pure connection between himself and his mind, body, and spirit. 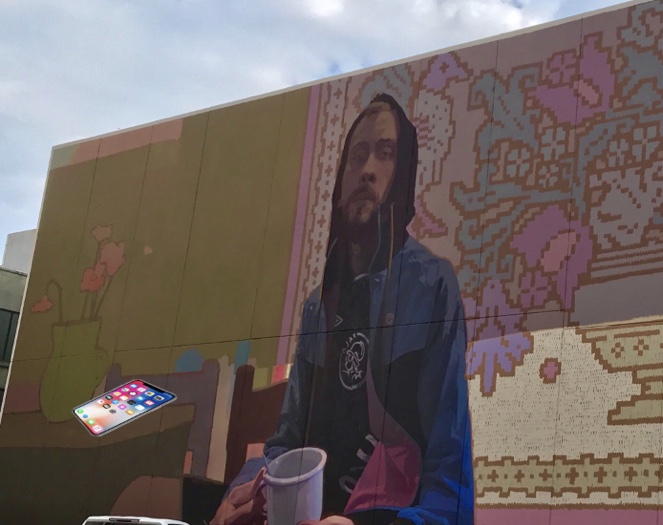 Took photo from Etam Cru’s mural and added an iPad to represent how the addition of technology takes away from how he is purely alone.
(Photo by: Ella Ancheta)

The right side of the mural is painted with a pink and purple hue, which contrasts with the left side of the mural that presents a green background with a green vase filled with four orange and yellow flowers in the forefront. This vase sits atop a table next to one empty chair as well as the chair occupied by the man. The pink and purple colors painted on the right side of the mural provide a soft yet uplifting element to the piece of art. Purple has a variety of effects on the mind and body, including, “uplifting spirits, calming the mind and nerves, and increasing nurturing tendencies and sensitivity”. The color pink can be an indication of “calmness, safety, and vulnerability.” The use of both pink and purple by Etam Cru in their creation is indicative of the emotions that the man in the mural is feeling. Feelings of calmness and happiness coincide with feelings of vulnerability to complicate how being alone affects the man. The man has a slight rise in his left eyebrow presenting him as seemingly curious of the world below him, not envious of the interactions. He does not seem sad or distressed; instead he seems at peace, having found one of the rare moments in life to take time for himself.