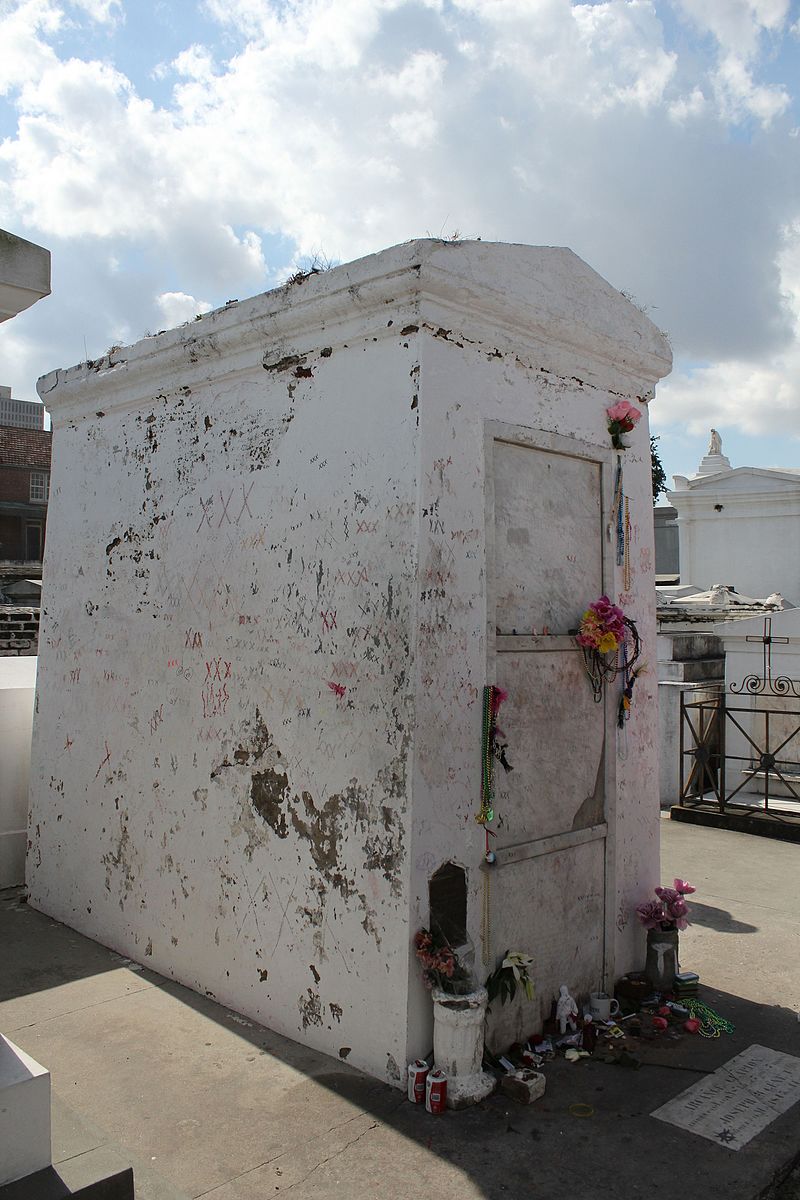 The history and tradition of Louisiana Voodoo has become a unique part of the culture of New Orleans. However, it goes deeper than the Voodoo that has been popularized by the media and tourist attractions. With origins in West Africa and Haiti, brought to Louisiana by enslaved and freed people of color, Voodoo has a rich and often overlooked history, so let’s explore how Voodoo has made its mark on the city and how the city has, in turn, influenced the perception of Voodoo. Mervian Smith presents an interesting analysis of the boundary between visitors honoring an important cultural and religious figure and damaging her legacy in a superficial practice that they do not fully understand. As Voodoo is increasingly trivialized and commercialized, it is important to respect and honor its history. Originally published on February 20, 2019.

Imagine showing up to the French Quarters one lovely day and in your provisional vision there lies the Saint Louis Cemetery No. 1. In this cemetery, as described in Nola.com’s “New Shrine of Voodoo Queen Marie Laveau Dedicated Saturday (March 14),” there is a tombstone covered with “graffiti X’s that has done damage to the bricks that are soft with age.” This is the tomb of a legend that has been desecrated.

There’s an engraving that briefly summarizes the life of the legendary Marie Laveau. Part of it says, “A mystic cult, voodooism, of African Origin” and “most widely known of many practitioners of the cult.” These words are on her tomb and tained in a brown shade.

The X’s, the engravings, the gifts left at the foot of the tomb, and the overall feeling that draws hundreds of thousands of people to her tomb every year is irresistible. Many “non-believers” find themselves making a wish on the tombstone of the Notorious Queen of Voodoo, Marie Laveau. Some even draw a row of consecutive triple x’s on the tomb’s surface, turn around three times, kick the brittle structure and then yell out their desire for happiness or love. To sweeten the wish even more, some add their special offering to the circle of goodies that encircle around Marie’s hardly standing grave. And that’s the issue. While these people are “loving” and “honoring” Marie Laveau, they are also destroying her visual legacy, so why do they keep doing it?

From the large amount of x’s to the pink paint incident, the defacing of Marie’s tombstone body highlights the mythical and interesting history behind how voodoo is portrayed. In the article, “The True History and Faith Behind Voodoo” by Kate Rechdahl it is indicated that ”Voodoo came to New Orleans in the early 1700s, through slaves brought from Africa’s western ’slave coast.’ Voodoo was then infused with the city’s dominant religion, Catholicism, and became a Voodoo-Catholicism hybrid referred to as New Orleans Voodoo. The hybrid was evident in Marie Laveau, a devout Catholic who attended Mass at St. Louis Cathedral.”

A snippet from this article briefly explains a bit of history behind Voodoo and the Queen of it by mentioning that, ”When Laveau was alive and living on St. Ann Street, people used to knock on her door at all hours, looking for legal help, food, or advice about a straying husband. Her death in 1881 didn’t stop that. ’In Voodoo, an ancestor is as much alive as a living person, ’ Gandolfo said. ’You just go to her new home now.’”

We as humans continuously distinguish the dead from the living. However, it becomes problematic when the spirit of the dead remains relevant, in existence. It is referred to as problematic because it is in this scenario where we lose the ability to establish a middle ground of existence. Although Marie Laveau was a priestess of the highest power, she and other voodoo Queens were still confronted with disrespect, judgement, ridicule behavior, and doubt. A statement mentioned in the article, Al Jazeera unveiling the refurbished tomb of the New Orleans Voodoo Queen, attempts to explain the connection between those who know little about the queen and their interest in learning by stating,“It’s not the people interested in history so much. There is an entertainment element to [New Orleans],” he said, referring to events like Mardi Gras. “When they see it as a theme park, that’s when things go wrong.”

Those who mark Marie Laveau’s tombstone up with red x’s, surround it with favors, and pray for their wishes to be answered are often considered consumers of hope. Yet, some beings use these rituals and traditions to exploit tourists, to put on a good show.  It is not because these people may or may not know anything about voodoo or yearn to test out Marie’s power but because they don’t acknowledge or recognize the damage that they are doing to her the soul of her gravesite.

From the article, “New Shrine of Voodoo Queen Marie Laveau dedicated Saturday (March 14),” Aymond said that while the church “does not endorse Voodoo” or the use of Laveau’s tomb as a focal point of Voodoo practice, “we don’t believe that any tomb should be defaced. It should be respected.” Rogers’ brother Roy Glapion, also a descendent of Laveau, said that “whether it’s your typical knucklehead or the archdiocese, we need to respect our deceased.”

This quotation highlights the problem of losing the private element of property and the risk of sacrificing the respect or beauty that is associated with the legend of our beloved Voodoo Queen.

Laveau is a legendary figure built from written and oral history, so marking up or damaging Marie’s tomb instead of just praising or giving favors to a statue of her is like begging at somebody’s doorstep, instead of asking them at a more appropriate time if that’s even applicable. We ask for wishes to come true, but maybe instead we should honor the being through research, responsibility, respect, and education. That’s the kind of X that really marks the spot.

Making your own way: An Interview with Rickey Jackson
Extra/ordinary

Traces, Trash, and Treasures: Forget Disney, there are no black fairytales (Part II)
Films and Screenings